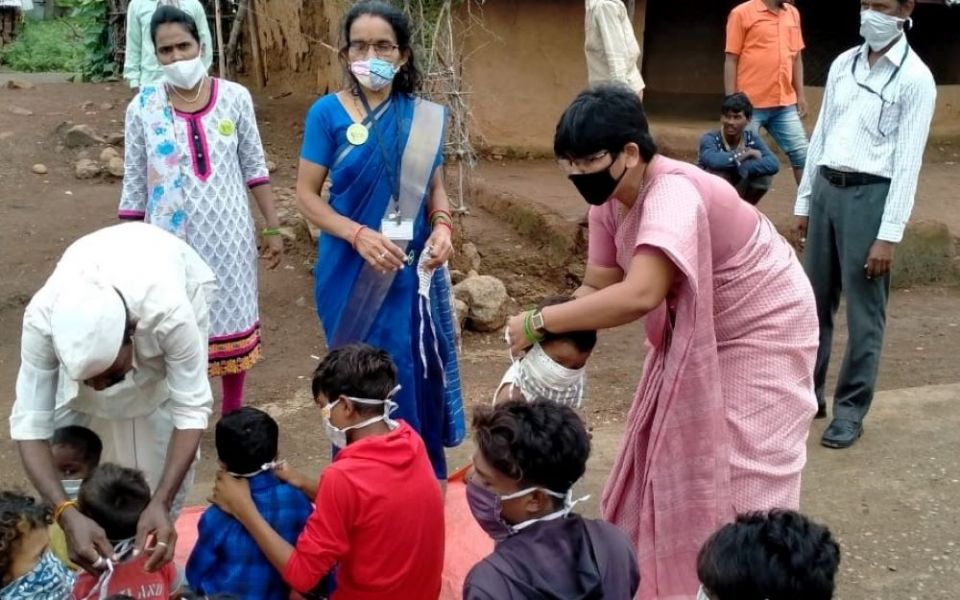 Around 9 a.m. a call came: "Hello, we found two kids left near the collector's office; please come and do the needful." Medical Mission Sr. Seema Bhalrai, coordinator of Child Help Line — a central government project of the Khandwa Diocese Social Service Society, or KDSS — left immediately. She and a few of her staff, along with police, spotted the twin girls, about 3 or 4 years old, who were living with physical and mental disabilities. In the United States and Europe, I have seen discarded items, like beds, chairs and sofas, thrown on the pavements — but never a discarded child. 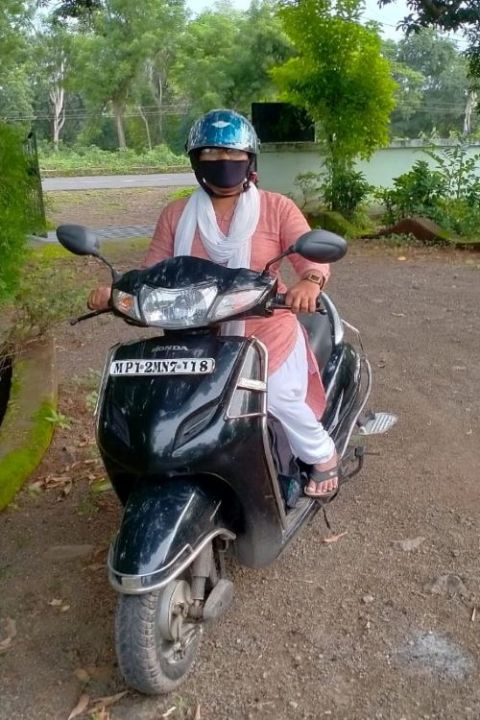 Staff from the Child Help Line, or CHL, staff tried to befriend the children by giving them snacks. One was unable to speak and had a "squint eye," but the other told them her name; from the names they could guess they are children from a Muslim family. From CCTV footage they learned that it was the mother who left the children and ran away.

The grandmothers from both sides of the family were summoned, but they refused to look after the differently abled kids, because of their abject poverty. As usual the Child Welfare Committee, CWC, a central government organization, asked the CHL to take the children to a temporary shelter until a solution could be found.

The news spread and the next day someone from the Muslim community volunteered to sponsor the children; meanwhile — fearing a police case — the mother (who has two other kids) came forward and picked up her twins. Thanks to the media and the timely intervention of the CWC and CHL, the kids got another chance to live with their mother. Listening to this story I recalled the words of God: "Can a mother forget the baby at her breast and have no compassion on the child she has borne? Though she may forget, I will not forget you" (Isaiah 49:15).

I like to listen to Seema tell many stories like this, from intervening and stopping child marriages to rescuing abandoned children. Recently she was informed by a man in Mumbai that his only daughter, 17-year-old Sumanthi (not her real name), eloped with a boy in Khandwa and he needed to trace her. Seema and her team searched the boy's house and found the girl happily living there. With the help of CWC and police, CHL staff moved Sumanthi to a temporary crisis center until there could be a resolution. The next day the father arrived and — after counseling and with much coaxing — the daughter was sent back with him though. Seema explained that by law she is not eligible to marry the boy of her choice until she turns 18 because the government has banned child marriage. Her father, a former village leader, had learned in his village that girls should not be married before the age of 18, and his own daughter violated that rule.

Children are the gift of God and they do have a right to education and — most of all — a safe and secure childhood. In India many children are exploited and even trafficked for child labor, child marriage, pornography and so on. India is home to hundreds and thousands of children below 18. Growing poverty and unemployment in rural areas has been exacerbated by COVID 19, making their lives difficult. Malnutrition is prevalent and the CHL is a boon to poor and marginalized children. 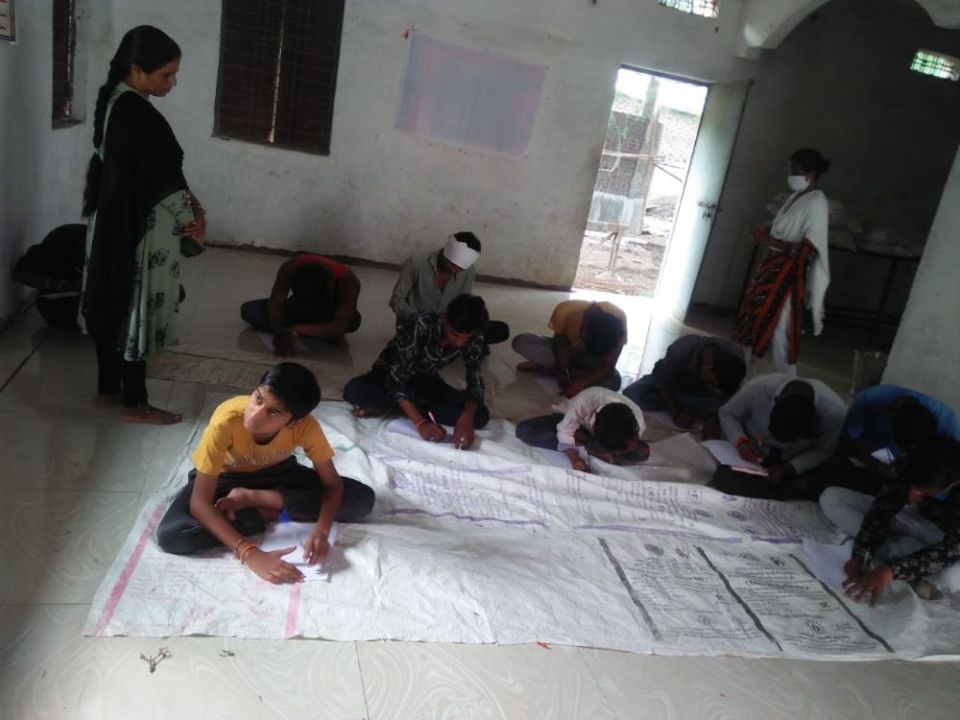 Boys in a rural village work on essays on the topic "How will I protect my sister?" (Courtesy of Celine Paramundayil)

As a Medical Mission Sister and a social worker, Seema uses every opportunity to help the victims by being a healing presence to them. She is alert to all phone calls so that she can organize her staff, who work 24/7 to respond to the calls in the Khandwa district, though other organizations manage Railway Child Help Line. Sr. Seema and her team are making a difference in the lives of many families through their crisis intervention and material support for kids. The strength of this ministry is the support it gets from the government, the police and Fr. Jayan Alex, director of KDSS — and the fact that she is a native of Khandwa.

It is a blessing to know that people are gaining awareness and reaching out for help, as the cases for CHL increase every day. The team provides education classes, and the media is happy to pick up the sensational cases, like the ones mentioned here. Medical Mission Sisters in our Deepalaya community are involved in empowering girls and women through formation, skills development and other programs. On Oct. 11, the International Day of the Girl Child, the CHL conducted sessions for the girls in the nearby school.

Along with the village animator, Ms. Anjali, Sisters Molly and Mary Anna organized classes for boys and girls. This year a novel program was introduced: an essay competition for boys in rural villages on the topic "How will I protect my sister?" It was received with much enthusiasm (the boys above 18 also wanted to participate) so they plan to conduct it in other villages as well. It is important that we involve boys and men to empower girls and women as the gender issue is not a women's issue but a social issue. With constant classes and interactions, changes are happening, but there is a long way to go for a girl child to feel secure and safe in India.

An interesting incident took place in Rome during one of Pope Francis' weekly audiences: A little boy came up to him and wanted his white skull cap. He got a chair to sit next to the pope, but the boy showed the bishop who stood nearby what he wanted by pulling on his hand and pointing out the pope's cap! When he received one, he left happily. The pope appreciated the free spirit of that child — behaving as if he were in his own home — and encouraged the adults in the audience to approach God with the same freedom. Like children, let us cry out for help, for God, our father/mother, is ready to respond to us. Ask and you shall receive. 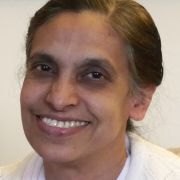 Celine Paramundayil is a Medical Mission Sister from Kerala, India, who represented the global Medical Mission Sisters at the United Nations for 10 years. She has been a trained Laudato Si' animator since 2017 and organized programs both in the United States and India. She currently lives in Madhya Pradesh and enjoys writing for various journals, including GSR.

Benedictine Oblates stand at a crossroads in monastic history