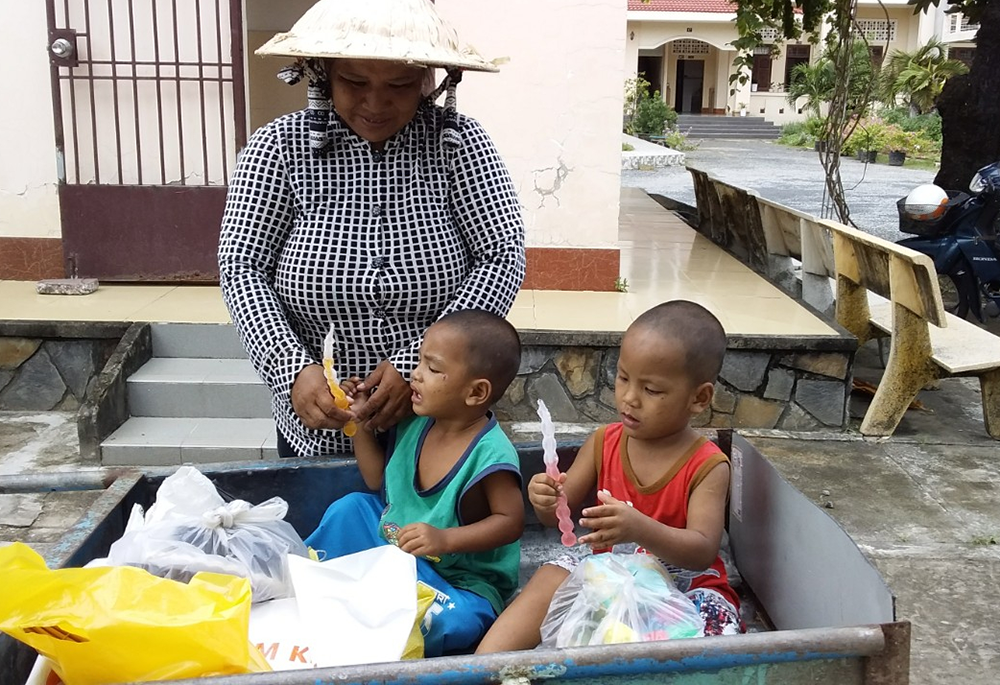 A 41-year-old woman in the Can Tho Diocese is pictured. She feeds her nine children by picking up scraps or bottles. She has to rent a three-wheeler to pick up scraps. Her total income is not enough to feed nine children, but she feels less worried because she gets support from religious sisters. (Mary Nguyen Thi Phuong Lan)

St. James the apostle exhorts us to have respect for the poor, for God has chosen them before the world, to become rich in faith and inherit the kingdom.  We will be condemned if we see the poor and weak without helping; everything we do for them is serving God — even giving them a cup of cold water (Matthew 10:42)!

People living in poverty, the homeless, those less fortunate than us — they were not born into a wealthy life like other people, so they need care and respect. They really need those with generous hearts to help them reach a more stable life.

Imbued with God's words and understanding the plight of the poor — older adults in wheelchairs selling lottery tickets to earn a daily living, and especially children who cannot afford to go to school — the Sisters of the Lovers of the Cross congregation of the Can Tho Diocese (of the Soc Trang province, in the east of the Mekong Delta in Vietnam) have opened a free class for Catholic and non-Catholic poor children. 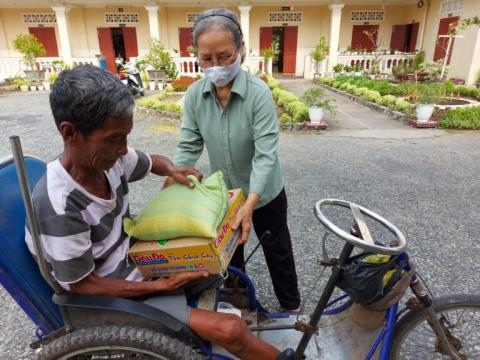 Vietnamese sisters of the Can Tho congregation of the Lovers of the Cross give gifts to older adults in the diocese. (Mary Nguyen Thi Phuong Lan)

Their income is sometimes not enough to feed their families, and sending their children to school is difficult. Furthermore, their children do not have the documents they need to attend the public school. According to Sister Mary Paul, who is in charge of the social charity department, said that "the aim of this charitable class is to help children learn to read, write, and do math so that they can earn a living easily without anyone [being able to] cheat them."

After the class, some of them follow their parents and sell lottery tickets. Because they would rather earn money, some children don't want to go to class. Sr. Mary Paul wants their lives to be better in the future, and always encourages and motivates them to learn by giving them a daily snack. If a child drops out, she visits their home and advises them to come to class again. Sister really worries what their future will be if they do not attend the public school, and are not well-educated.

The Sisters of the Lovers of the Cross congregation are also concerned with older adults, some in wheelchairs, some with disabilities, who sell lottery tickets to earn a living to feed not only themselves but also their families. Sr. Mary Paul said that her community "only can afford to support them [with] gifts such as rice, cooking oil, salt and spices.... on occasions like Christmas and Easter, and by saving up their money." Sisters really need benefactors to sponsor more gifts for them.

When our Dominican sisters visit the Sisters of the Lovers of the Cross, we deeply understand their challenges and difficulties in doing charity for the poor in that diocese. Therefore, we have collaborated with them by asking for support from benefactors to get more gifts for the poor there. We sent the sisters 100 gifts for children (such as pens, books, rulers, milk, cakes and candies) and 200 gifts for elders (including noodles, cooking oil, sugar, cooking oil and bowls, and chopsticks) for them to distribute. We were really glad to bring these gifts, and hope that their lives of people in difficult circumstances will be less difficult every day. 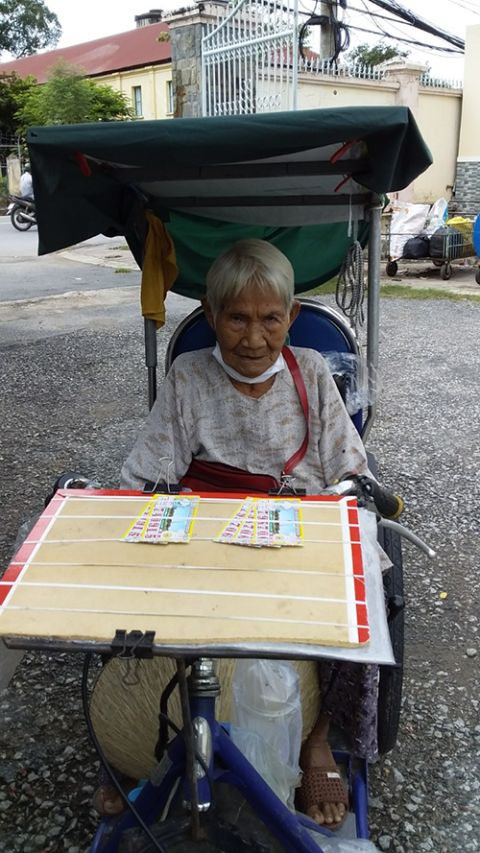 A 75-year-old woman sells lottery tickets to feed herself and her son, who is disabled. (Mary Nguyen Thi Phuong Lan)

I interviewed a 75-year-old woman with five children. Four of them are married already but they are also very poor. Presently she is living with a disabled child, and sells lottery tickets to feed the two of them. She was very happy to get these gifts from sisters because her income is sometimes not enough for their daily meals.

I also met a 41-year-old woman with nine children; the eldest son is 20 years old. He stays at home to take care of his young sisters and brothers for his mother. Her husband abandoned the family to live with another woman, and the mother picks up scraps or bottles to feed the children.

She earns an average of about 100,000 dong (between $4 and $5) per day but she has to rent a three-wheeler to pick up scraps. Her total income of 80,000 dong (between $3 and $4) is not enough to feed nine children but she feels less worried because she gets support from sisters, and her children sometimes have milk, cake and candy to enjoy!

I interviewed a 9-year-old boy taking the sisters’ free class; his level of education is grade two. Thanks to his studies, he knows how to calculate ticket sales and read the words on lottery tickets, newspapers and billboards on the street. He loved his gifts from the sisters — pens, notebooks rulers — and will save those for next year’s school; he will give the milk, cakes and candy to his young brothers at home.

After the visit and distribution of gifts, I felt sorry for the poor children — I wonder what their future will be like? If they do not go to public schools, they only learn reading and writing. After the class they will sell lottery tickets to make money. They are trapped in poverty forever until they have a proper education. The more I think about those poor children, the more I love them, but I don't know how to help them; I just pray for them every day and hope to visit them a few times a year.

Truly, giving to others does not make us poor, but helps us to become rich and grow in the grace of God. Jesus taught his disciples that the one who has will be given more and he will have in abundance. But the one who does not have will be deprived of even what he has (Matthew 13:12).

What we have is not obtained by our own efforts, it is all thanks to the love of God. When he came to earth as a human, Jesus, who was rich, became poor (2 Corinthians 8:9) to bear all the hardships of human life. He understands what we are lacking. He invites us to live, love, serve, and share with others what we have. Serve the poor means that we are practicing the word of God: Fortunate are the merciful, for they shall find mercy from God (Matthew 5:7).

There is no shortage of poor people in our lives. The most important step is for us nuns to dare to get out of ourselves, out of our safe zones, to find those who are poor, lonely, injured, disabled, abandoned, or on the margins of society, and serve them because they are images of God. Whenever you did this to these little ones who are my brothers and sisters, you did it to me (Matthew 25:40).