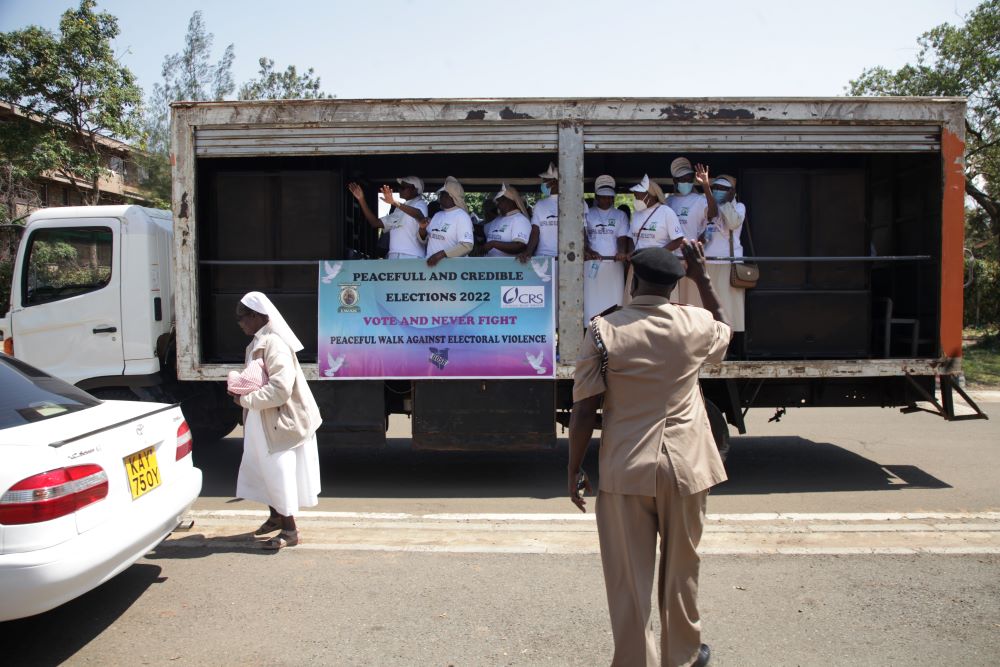 On the street corners of Kenya's third-largest city on the shores of Lake Victoria, men from all walks of life gather in small groups during lunch breaks and late into the evening to discuss politics.

Like in other regions, Kisumu is gripped with election fever a few weeks before Aug. 9, Election Day. The area is considered the bedrock of political long-hauler Raila Odinga, who is competing for the presidency against the current deputy president, William Ruto.

Odinga, the 77-year-old Kenyan veteran opposition leader, will make his fifth stab at the presidency under a coalition political party, the Azimio-One Kenya Alliance. His supporters are now sure of his victory since outgoing President Uhuru Kenyatta is supporting his candidacy.

"Odinga will be our next president," Moses Owino, wearing a black suit and a tie, told participants surrounding him during a political discussion in Kisumu. "Odinga has previously won elections, but the government rigged him. This time, it won't happen." 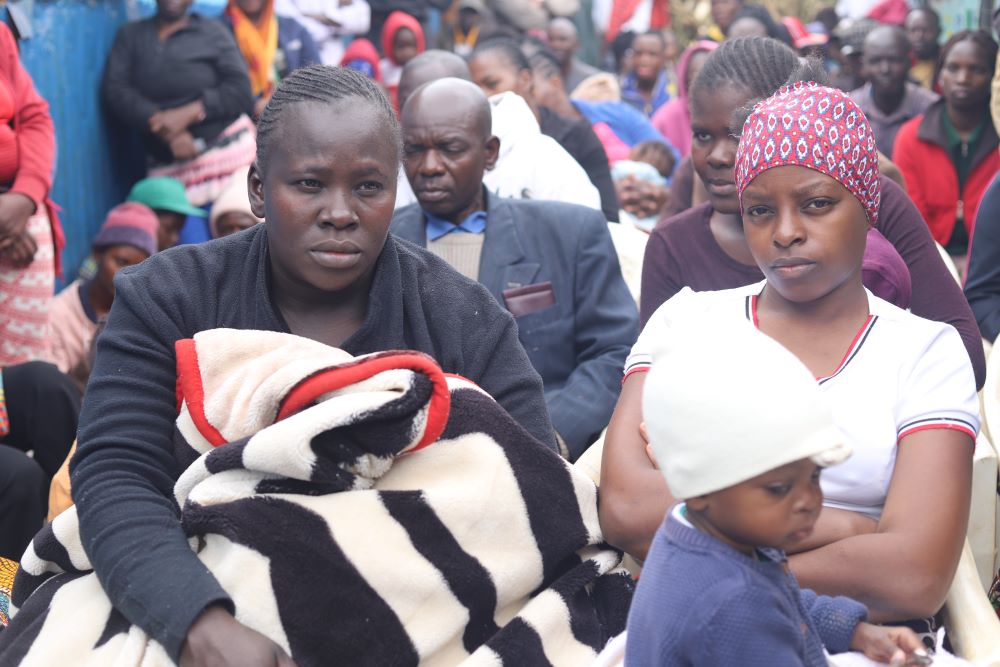 Residents of Kawangware, a low-income residential area in Nairobi, Kenya, listen to sisters during a July 22 voter education and peace campaign session. Religious sisters are carrying out civic education across the country to ensure people are knowledgeable about their voting rights and the importance of keeping peace during elections. (GSR photo/Doreen Ajiambo)

Back in Nairobi, the country's capital, a group of young people who meet daily at Jeevanjee Gardens in the business district to discuss the state of politics worries that the government might manipulate the vote in favor of Odinga.

"Let them not try to rig elections. We will not accept the results. Ruto is more famous, and everyone, including the youths, likes him," said John Kariuki, a supporter of Ruto who owns an electronics shop in Nairobi's business district. Ruto, 55, is running under the United Democratic Alliance party.

Such stances from supporters of Odinga and Ruto have worried religious leaders, including nuns, that this race will be a rerun of the divisive 2007-2008 elections, which claimed 1,300 lives and displaced 600,000 people. And in the 2017 elections, more than 100 people were also killed after police violently responded to opposition supporters protesting the rigging of the election, which the Supreme Court eventually nullified.

"As we near the elections, the climate has changed. People are ready to go after one another. Our youth are prepared to fight each other. Neighbors now see each other as enemies, which is very unfortunate," said Sr. Virginia Njeri of the Religious of the Assumption. 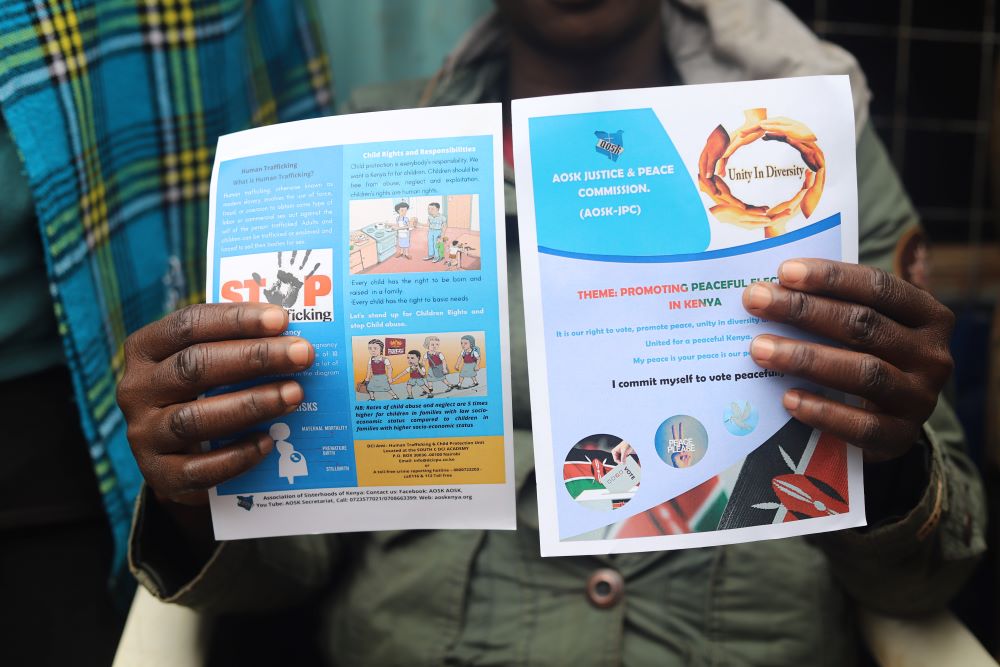 The elections, which take place every five years in the East African country of more than 50 million people, are tribal and ethnic. Most Kenyans vote for presidential candidates belonging to their ethnic group, hoping that they will bring development to their areas or region once in office. But experts have warned that the high expectations from candidates and their supporters could see a new outbreak of election violence. They have opined that Odinga and Ruto should pledge to resolve any election dispute in court to avert violence.

"Things tend to tense with each election in Kenya. Each party always tries to pull strings," said Macharia Munene, history and international relations professor at the United States International University-Africa in Nairobi. "The leading candidates have the potential to cause problems because they have their tribes or supporters behind them. In fact, the two of them know each other. They were together [in the Orange Democratic Movement] during the skirmishes that we had in 2007. And now, they are separate."

Church leaders across the country have started peace campaigns and civic education to avert violence before, during and after the election.

In Kisumu, for example, religious sisters travel in caravans, preaching peace. The government has mapped out the region as a hotspot because of past incidences of violence.

Sr. Matilde Anyango Omondi said in most instances, politicians use the youth to create chaos, leading to the loss of lives and properties. She noted that, unlike the previous elections where the sisters would pray silently, the caravan would bring hope to many that they have people praying for them while passing through the selected areas.

"There have been concerns about election violence in this region, which should not recur," said Omondi, the regional superior of the Franciscan Sisters of St. Anna. "We are going to have peaceful marches advocating for a peaceful election because St. Francis was a man of peace, and peace is our main theme." 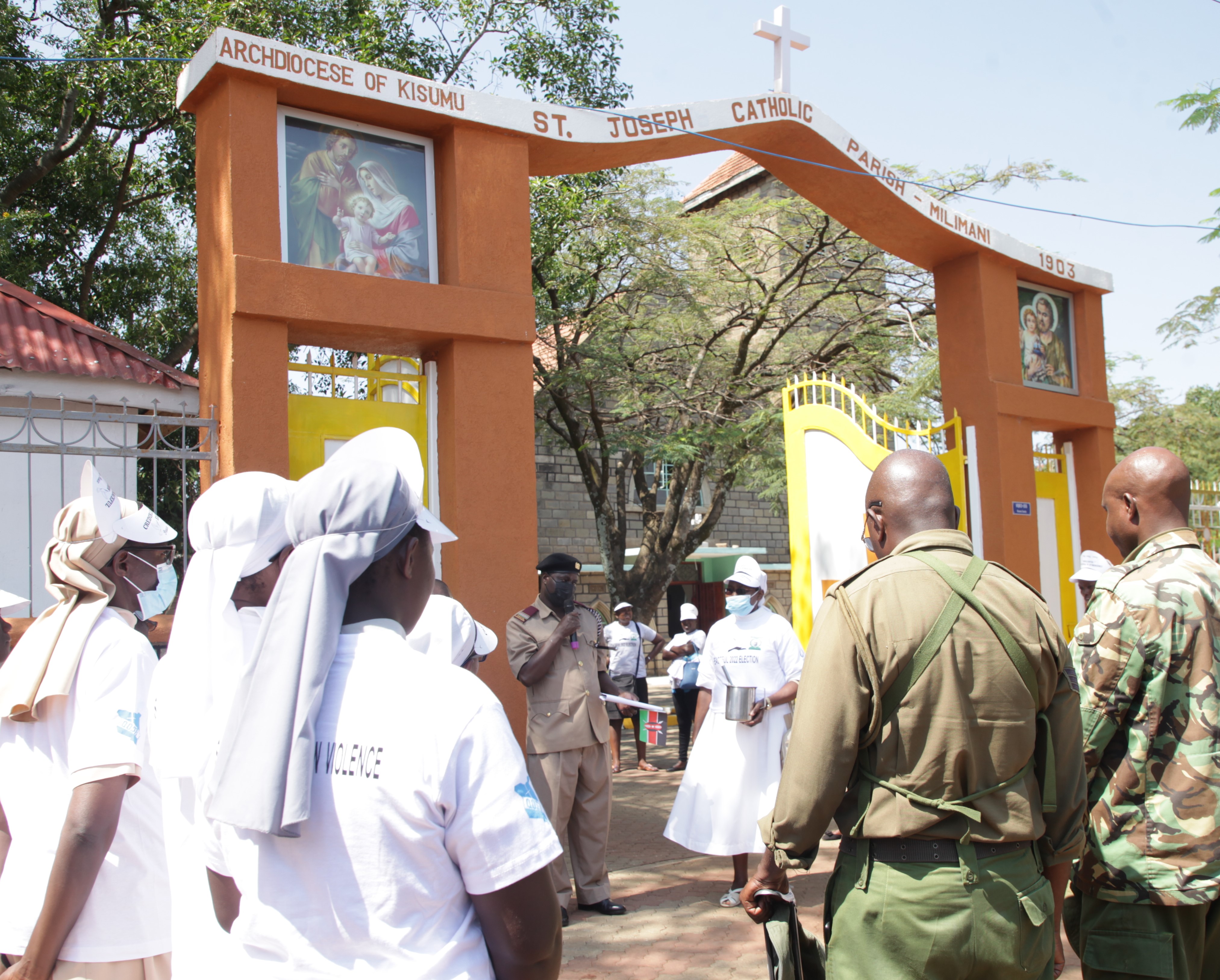 Franciscan Sisters of St. Anna and security officers bow for prayers and blessings in front of St. Joseph Catholic Church in Milimani, Kisumu, Kenya, on July 16 ahead of the peace caravan walk. (Vincent Aduda)

Omondi said they have been traversing areas in parts of western Kenya preaching peace and harmony, and they also create awareness during prayer sessions via Radio Maria, a Catholic-run radio station based in Nairobi but heard nationally. She urged residents to consider whoever the electoral body announces as the new leader as God's choice.

"We are encouraging families to maintain peace, and youths should also avoid being used by politicians. Let us not forget that there is life after elections," she said. "God always has a plan for every human being. As we choose our leaders, he has already made his choice. Let us respect whatever the outcome is."

Fr. Shadrack Malo, who accompanies the sisters during their home visits to educate citizens on their right to vote and choose leaders with integrity, said creating awareness of peaceful elections is also one of the roles of the church.

"We are visiting people's homes and workplaces to sensitize them on the importance of peaceful elections," said Malo, the presiding priest of St. Joseph Catholic Church in Milimani, Kisumu.

In Nairobi, religious sisters under the Justice and Peace Commission have intensified campaigns for peaceful, free and fair elections while others use their pulpits and radio stations to urge residents to resist politicians propagating hate speech.

The sisters hold peace caravans every week across the city to ensure everyone gets the message. They also meet community groups for young people, older people, women, and men. During the meetings, sisters provide civic education to citizens. They urge them to vote and maintain peace during elections. People are also encouraged to vote for God-fearing leaders and those with integrity so that they can fight against social evils such as corruption and poverty.

"On Aug. 9, please make sure you go to exercise your right. You can bring change by voting for the right leaders," Njeri told the residents of Kawangware, a low-income residential area in Nairobi, during a recent meeting. "Practicing this right gives you the chance to choose the person you want. Don't complain about bad leaders if you won't go and vote."

The civic education by religious sisters has changed the minds of some of the residents here. Many people who have never voted for various reasons — including lack of knowledge and interest or disillusionment — are now willing to go to the ballot box and vote for their favorite candidates.

"I have never voted before, but now I will go and vote for the leader I want," said Caroline Nafula, 38, a mother of six. "The sisters have taught me the importance of voting and how to do it well. I now know it's my right to go and vote."

Archbishop Philip Anyolo, the head of the Nairobi Archdiocese, told Global Sisters Report that the church started the peace campaigns in February during Lent to ensure the peace message reaches many people across the country.

"We made prayers that we give to our congregants every Sunday, which are prayers for peace. We also included some phrases from our national anthem about a peaceful country for all of us," he said. 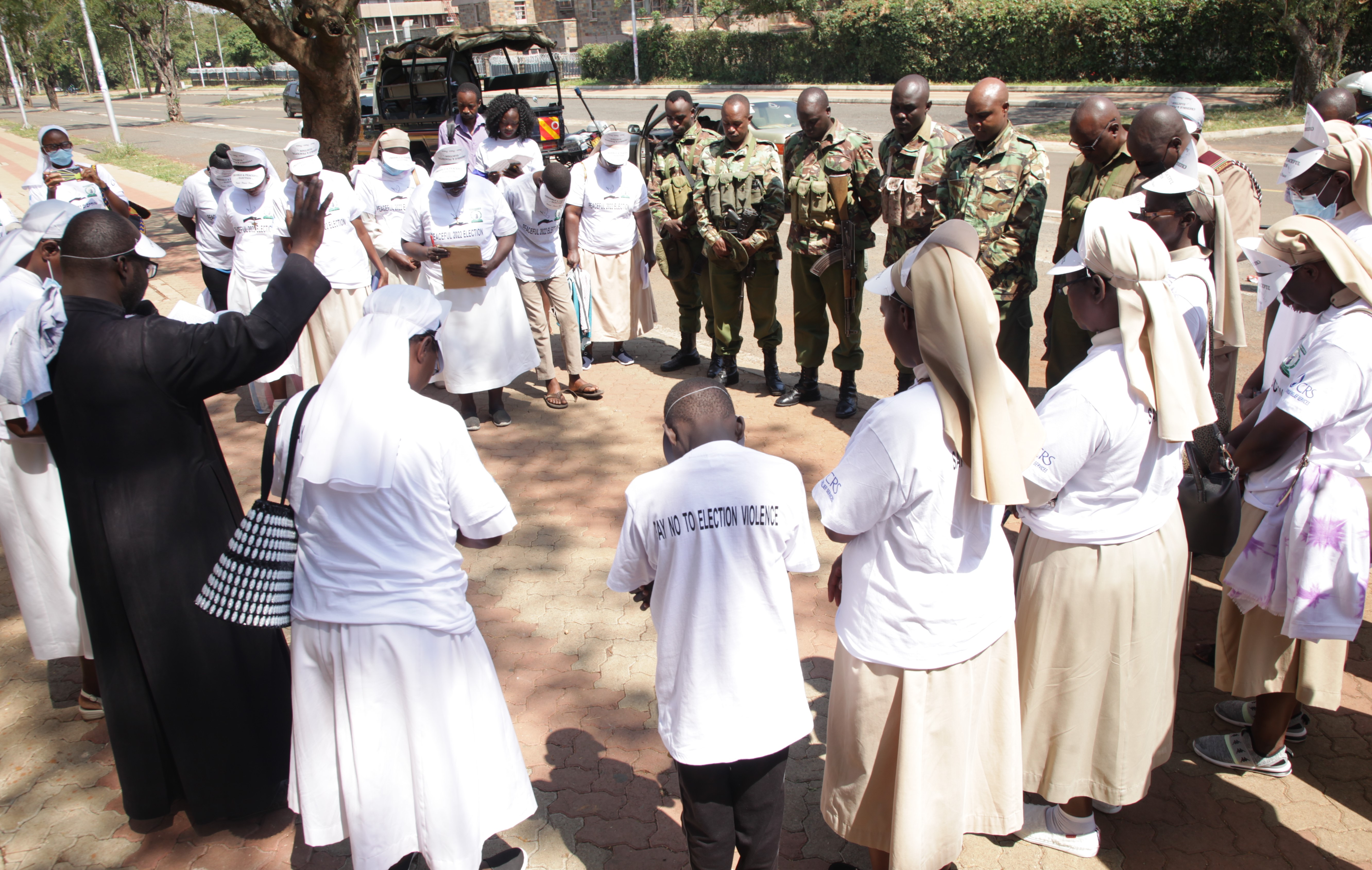 Fr. Shadrack Malo blesses the security officers and Franciscan Sisters of St. Anna in preparation for their peace campaign July 16. The peace caravan moved around Kisumu town and neighboring towns in Kenya to sensitize locals on the importance of peaceful elections. (Vincent Aduda)

Anyolo said the church has also been meeting politicians to urge them to desist stirring up hatred between people, neighbors and communities. He said they have prioritized sermons on peace during Sunday Mass to urge people to be careful not to be used by politicians for the politicians' own selfish purposes.

"We also tell the politicians during Mass that they have a responsibility toward this country," he said. "Kenya belongs to all of us. We are children of God. We tell people that they should know we need one another despite our different political opinions. We must learn to be good neighbors, just as Christ taught us we should be our brother's keeper."

Meanwhile, Njeri said the only way for the country to avoid the reoccurrence of violence every election period was for people to love one another.

"We should love one another just as God loved us," she said. "Nobody deserves to die or lose their property because of politicians or the elections. Choose peace, stay alive and love each other."

This story appears in the Kenya election 2022 feature series. View the full series.