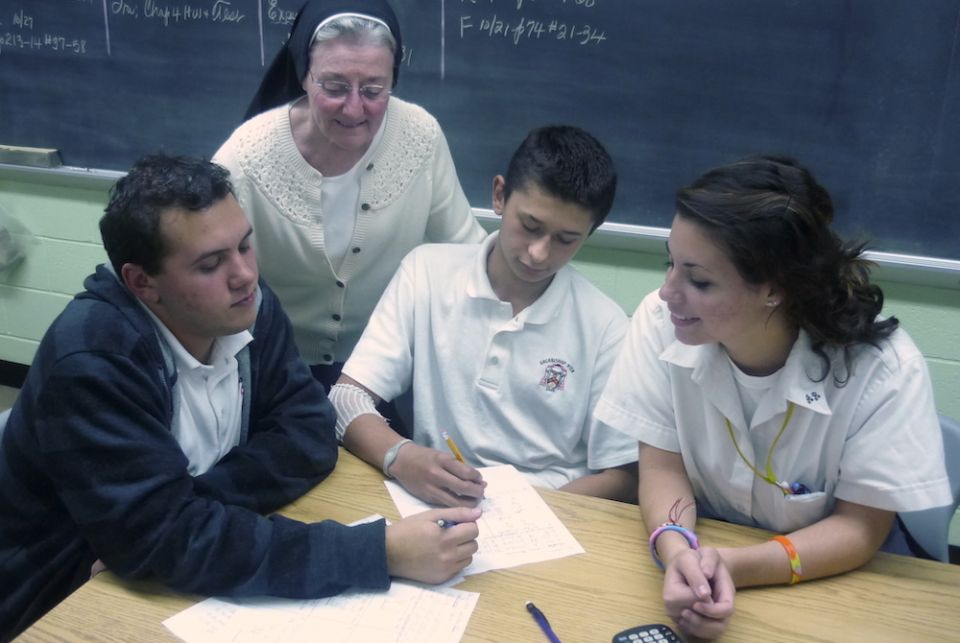 Philadelphia — There's no cutting corners in Immaculate Heart of Mary Sr. Alice Hess' math classes, her students say. But if they do the challenging work, they add, this memorable teacher's faith in them and their abilities seems boundless.

A member of the mathematics faculty at Philadelphia's Archbishop Ryan High School, Hess, has been recognized numerous times for her ability to inspire and motivate students.

In the course of five decades of teaching, she has poured her heart and passion for excellence into teaching the sons and daughters of middle- and working-class parents, letting them know that there is nothing they cannot achieve if they work hard.

People such as former student and Rhodes Scholar Theresa Simmonds.

"Most of us were members of the first generation in our families to attend college, and our inner-city location often inspired, in non-area residents, derogatory stereotypes about us and low expectations for us. What we accomplished while under Sister Alice's tutelage left no doubt in anyone's mind about our abilities and our determination," Simmonds wrote in a successful 2008 recommendation of Hess for a U.S. Department of Education American Star of Teaching award.

Hess' latest honor was an Outstanding Educator Award given by the University of Chicago. Every year, incoming students can mention an educator who has altered their lives for the better. Approximately one-third of students do so each year, and every educator nominated is recognized. Hess was nominated for the prize by university freshman Mathias Davila, who graduated from Archbishop Ryan this past spring.

"I've always been pretty good at math," Davila, who is hoping to major in math and statistics, said in an interview. But once he got accustomed to the speed of the three classes he took with her and how hard he had to work in them, he said, "she was the kind of person who actually challenged me. Her work ethic, her character, and her passion in general just kind of inspired me," said Davila. His father, a Peruvian immigrant, never finished college, and his mother, also from Peru, is currently pursuing a degree at a local university.

Hess is noted for her academic rigor and emphasis on hard work in the classroom. But the 79-year-old sister's voice broke when she remembered how it all began — with the kindness of long-gone sisters at St. Barnabas, the Philadelphia parochial school run by the Sisters, Servants of the Immaculate Heart of Mary, who charged only $10 a year to cover the cost of book rentals. They refused to take the money from her when it was offered at the door of the classroom, she recalled, tucking it back into her blouse pocket and asking her to return it to her mother (she is one of eight). 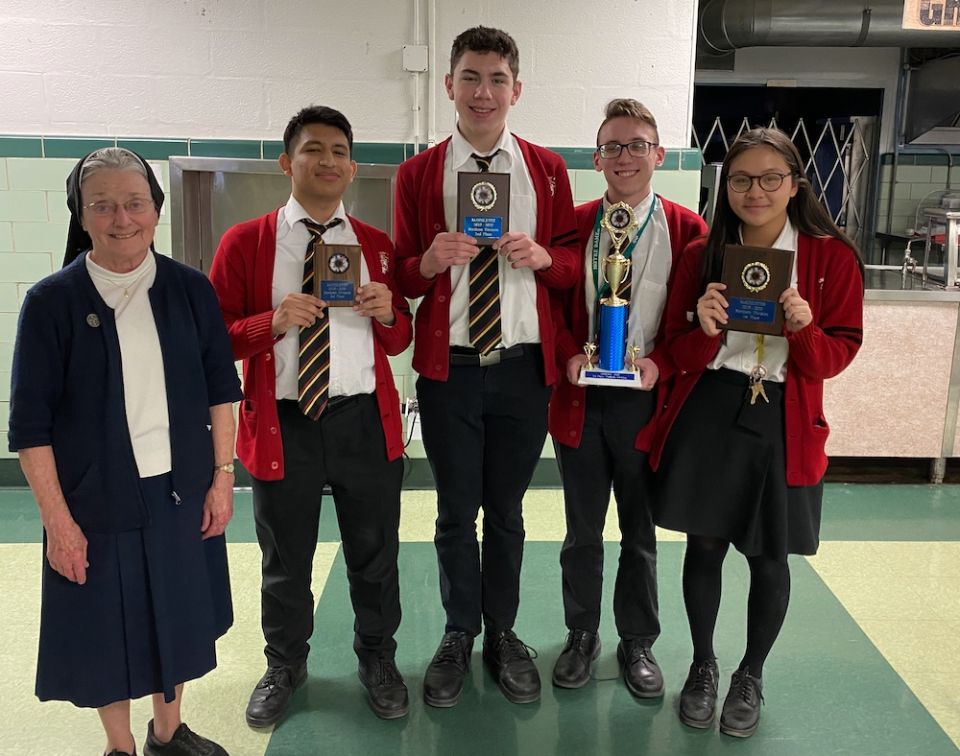 Coach Sr. Alice Hess stands in the school cafeteria next to the students who scored the highest in the 2019 Mathlete competition in the Philadelphia Archdiocese. The Archbishop Ryan High School students are, from left, Matthias Davila, Gabriel Charpentiere, Ryan Elkins and Florence Han. Under Hess, the school has had a string of Mathlete wins. (Provided photo)

"I get choked up every time I think of it. The sisters didn't have anything, but they really loved us. They were a very important part of our family life."

Hess grew up in Southwest Philadelphia, the daughter of a gas-station owner. In high school, the family moved outside the city to Levittown, where her father managed several stations.

"Daddy really wanted us to get an education," she said. In fact, some of her siblings went on to pursue advanced degrees.

At the same time, she said, her father left it to his children to make their own choices. So he supported her when she decided to bid adieu to her college boyfriend and pursue a vocation with the Immaculate Heart of Mary sisters. (Her mother, she said, had prayed that one of her children would have a calling to religious life.)

"Once I realized I was offered a vocation, where would I turn but the IHM sisters?"

Though Hess has taken part in some highly prestigious educational programs in math and the hard sciences, including offerings at Princeton and Oxford universities, she credited her success more to diligence than to native ability. "I was persistent, very persistent, and tenacious. But I was not gifted. I am being humble because humility is truth," she said. "I never thought of myself as gifted with anything except the vocation and determination beyond my size."

It is that determination, and commitment to the process of learning, that she has passed on to generations of students, they report. 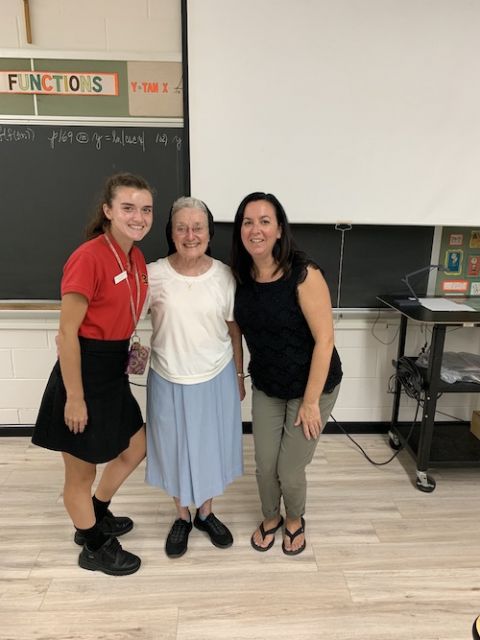 Debby Larkin Riston, a 1969 graduate of Our Lady of Lourdes Academy in Miami, Florida, recalls the young Hess as a teacher who could "persuade high school girls to love math, because she was so enthusiastic about it." Most of all, said Riston, a retired corporate human resources director who now considers Hess a friend, "she taught us that math is the foundation of thinking skills."

A college access and career readiness coordinator at the University of Pennsylvania, Simmonds studied trigonometry and calculus with Hess while a student at Philadelphia's St. Maria Goretti in the 1980s.

Students assigned two problems were expected to do four or six, Simmonds recalled — enough to understand the method behind them. "Everyone was expected to do more," including assignments over Christmas break, she said.

"Sister Alice" was quick to recognize, not just the high achievers, but the hard workers and those who helped others learn. "Success was not just about your GPA. It was about service as well," said Simmonds.

Grace Scanlon, now a freshman health science major at Duquesne University in Pittsburgh, graduated from Archbishop Ryan last year. She said that while she knew she was "somewhat good at math," Hess "made me think I was better than I was. It was very difficult material, but she made you feel very comfortable."

Scanlon's mother, Kelly, was also one of Hess' students. 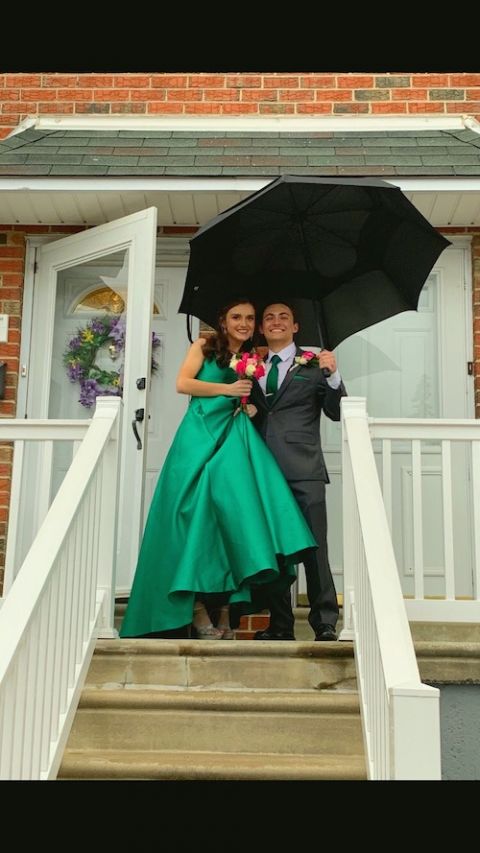 Archbishop Ryan students Grace Scanlon and Marco Rossillo pose for photos in front of Scanlon's home before taking off for the school's junior prom on April 13, 2019. (Provided photo)

Grace's boyfriend, Marco Rossillo, said that Hess (and math study sessions with Scanlon) pulled him out of a junior year slump and enabled him to do exceptionally well in statistics and calculus in his last year at Archbishop Ryan. Hess "taught me how to study, how to work really hard. She wants you to understand the concepts," said Rossillo, a freshman mechanical engineering student at Temple University. "There's no one like her."

Hess' success at fielding winning teams in the local Mathletes competition dates all the way back to her years as a teacher at Philadelphia's Maria Goretti (now Sts. John Neumann and Maria Goretti Catholic High School).

In 1998, Hess won the Presidential Award for Excellence in Science & Math Teaching. USA Today named her one of the top 20 educators of 2002 in the country. She was honored by the National Catholic Education Association in 2003 for distinguished service and chosen as one of five teachers nationally to be named a U.S. Department of Education American Star of Teaching in 2008. A College Board consultant and Advanced Placement statistics exam reader, she's also been awarded a 2003 honorary doctorate from Holy Family University in Philadelphia.

Asked for the "secret sauce" that makes her a teacher lauded by generations of math students, she said, "I can teach it to anybody who is around my own IQ, which is very normal. The kids I teach in these AP courses are a lot smarter IQ-wise than I am. I'm able to reach the struggler who is just normal like I am. And, you know, so that's my gift," she said.

"The whole idea is to get kids involved in learning. Even though they think they could never be good at math, if they work with you, they eventually see that 'I can do it.' Success breeds more success." Her confidence in her students, combined with a peer-tutoring system that encourages classroom collaboration, creates a "win-win situation," she said.

Hess, not prone to overstatement, said she struggles with a worsening condition in her neck for which she's getting medical treatment. She's at peace with the possibility of retiring to the sisters' retirement center, Camilla Hall, in the Chester County suburbs, a place she called a "powerhouse of prayer." God will let her know it's time, she said. But she doesn't sound quite ready to head out there yet.

"As long as I can teach and enjoy the kids, and they enjoy me, I want to teach. I don't think there's anything I'd like to do more."

St. Joseph sisters help immigrants get a start on life in America