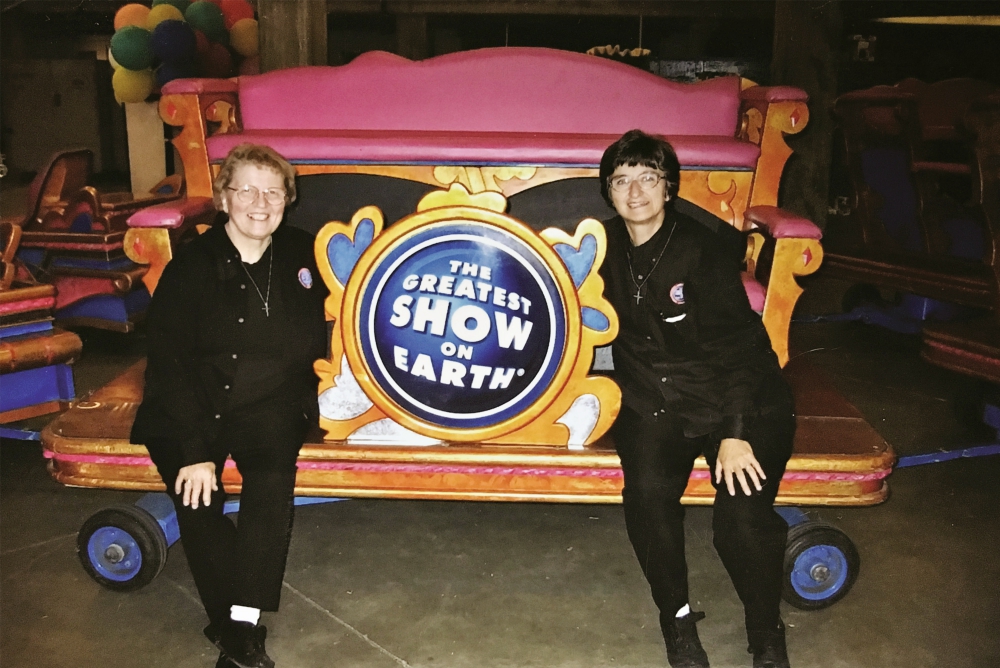 Sr. Dorothy Fabritze, right, and Sr. Bernard Overkamp, both Missionary Sisters of the Most Sacred Heart of Jesus, are seen during their years of ministry among circus performers in this undated file photo. (CNS/Courtesy of Sr. Dorothy Fabritze)

Sr. Dorothy Fabritze remembers attending a circus performance once or twice in her youth.

She enjoyed the experience, but she wasn't one of those kids who dreamed of running off and joining the circus.

And yet, as a member of the Missionary Sisters of the Most Sacred Heart of Jesus, she did precisely that.

In 2000, Fabritze started her religious congregation's circus ministry, a Catholic outreach to the men and women who work as performers in these touring productions.

"The main purpose of the ministry," she said, "is to be a religious presence among this itinerant people who travel to a new city every day."

For the first 11 years of the ministry, Fabritze and Sr. Bernard Overkamp traveled across the country with various circuses, where they were paid employees in addition to serving as Catholic missionaries.

While Overkamp worked primarily as a cook and seamstress, Fabritze held "a vast variety of jobs."

"Not the trapeze," she quipped, explaining that her circus jobs included selling and taking tickets, serving on the crew that erected the circus tents and teaching the school-age children whose parents worked for the circus. 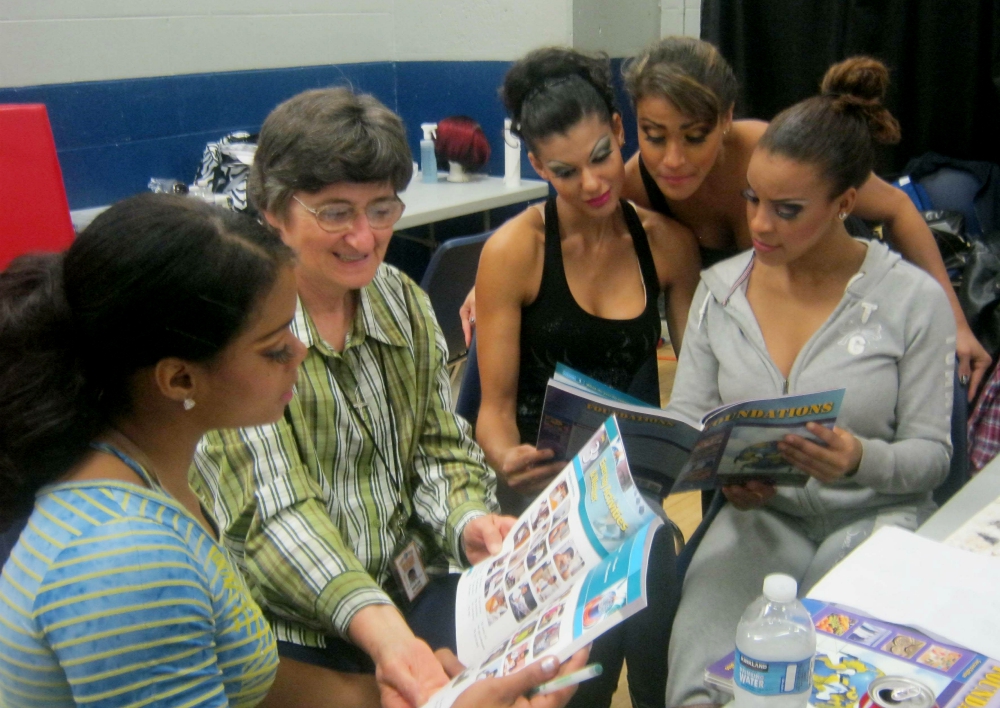 Sr. Dorothy Fabritze teaches English as a second language to performers in a circus. (Courtesy of Missionary Sisters of the Most Sacred Heart of Jesus)

The sisters' religious congregation purchased a truck and trailer that served as their home and allowed them to travel the country with a succession of circuses, beginning with Roberts Bros. Circus from 2000 to 2001 and also including Ringling Bros. and Barnum & Bailey Circus from 2004 to 2011. By special Vatican permission, the Blessed Sacrament was reserved in the trailer; one of the bedrooms was converted into a chapel.

Fabritze paid a visit this summer to the San Diego Diocese's Missions Office at the pastoral center. She gave an interview to the diocesan newspaper, The Southern Cross, about life as a missionary to circus people.

"Every circus we joined, people knew we were sisters, but they also knew we had a job and we did everything like they did," she said, explaining it was necessary to become part of the circus culture to better minister to them.

Without fail, Fabritze said, their circus co-workers would tell them that while they were doing the same work, the sisters somehow seemed to "do it differently."

"That gives us an 'in' and that's what we're waiting for," said Fabritze, whose previous ministry assignments included teaching in Catholic schools and 16 years of missionary service in Papua New Guinea.

During her years in circus ministry, she taught religious education classes, provided sacramental preparation and reached out to local parish priests to celebrate Mass for circus personnel when the circus arrived in a new town.

Fabritze speaks warmly of the "great family values" exhibited by circus workers, noting that many of the performers are "born and bred in the circus," going back several generations, and they pass along their skills to their own children. 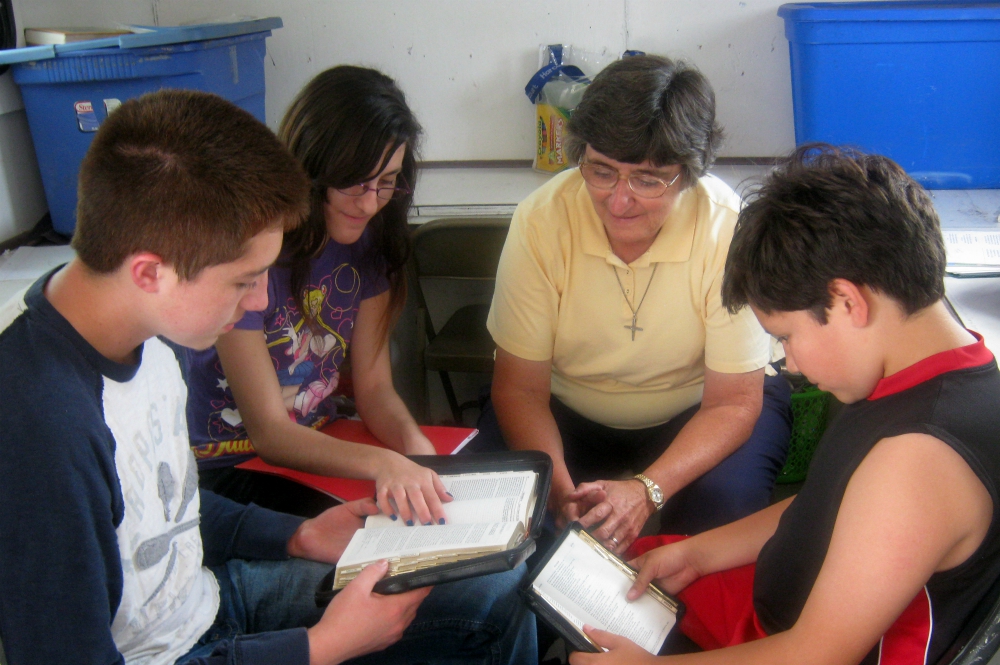 Sr. Dorothy Fabritze, second from right, teaches three students in preparation for them to receive the sacrament of Confirmation. (Courtesy of Missionary Sisters of the Most Sacred Heart of Jesus)

Fabritze didn't invent circus ministry — the U.S. Conference of Catholic Bishops has a national circus chaplain, and members of the Little Sisters of Jesus previously have engaged in the ministry — but she introduced her own religious congregation to it and has been instrumental in its development.

For six years, beginning in 2012, Fabritze opted not to take a paid position with any particular circus, freeing herself up to visit four circuses a year in an effort to empower circus employees to step up as lay Catholic leaders.

Though she retired from circus ministry in 2018, Fabritze still visits circus performers when their travels bring them near her home in Pennsylvania. She remains part of a Circus Ministry Group that includes Fr. Jerry Hogan, a priest of the Boston Archdiocese, who has been national circus chaplain for more than 25 years, as well as three additional priests and five religious sisters.

And Fabritze is still actively involved with fundraising for the circus ministry. Donations are used for travel expenses, religious education books and materials, spiritual development of lay leaders, and on-site ministerial services.

Fabritze said the most rewarding part of circus ministry is "the people's enthusiasm for the word of God ... and their appreciation of us being there."

She recalled the time when the paymaster at Ringling Bros. and Barnum & Bailey Circus, a non-Catholic, told her that all of the circus personnel — Catholics and non-Catholics alike, those who sought her out for her services as well as those who didn't — truly appreciated her being there.

"That showed me what the people want: They just want the church present amongst them," she said. "We've said for years ... 'Here's the church; you come.' But the circus ministry changes that and we say, 'We're taking the church to you.'"

[Denis Grasska is assistant editor of The Southern Cross, newspaper of the San Diego Diocese.]