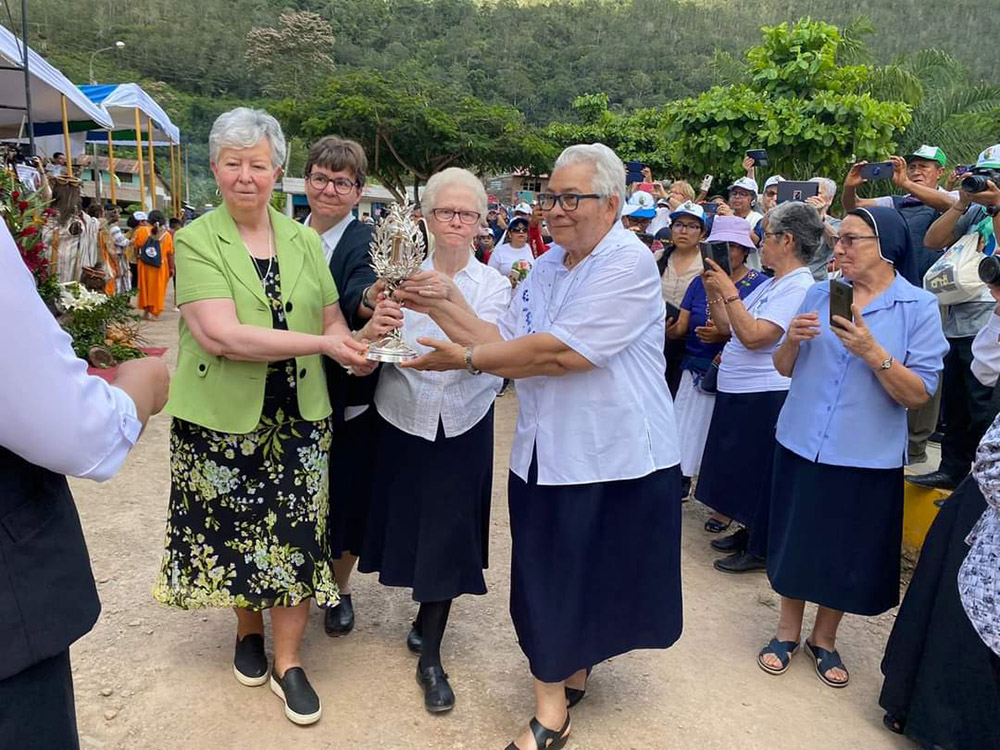 The beatification of our Sr. María Agustina Rivas López — affectionately known as Aguchita — on May 7 in La Florida, Peru, was the culmination of five years in which I was blessed to help in the preparation process for her cause. Being part of the journey in bringing forward the life of someone for the purpose of beatification involves treading on holy ground with awe, though with some difficulties. I joked, "This process is working on my holiness!"

Our sculptor-God shapes and fashions us our entire lives, to become the person God calls us to be, as God did with Aguchita.

Throughout her life, Aguchita, a member of the Congregation of Our Lady of Charity of the Good Shepherd, dreamed of ministering to the people in the Amazon jungle, and finally realized that dream. In the late 1980s, violence pervaded Peru's central Amazonian region, at the hands of the guerillas of the Sendero Luminoso (Shining Path). Aguchita was sent to La Florida, a small area in this region.

She loved being with the women and children, teaching them useful skills, and going to the neighboring town for basic necessities. Despite health issues and the violence all around her, she chose to remain with the people, embracing her mission with courage and zeal. 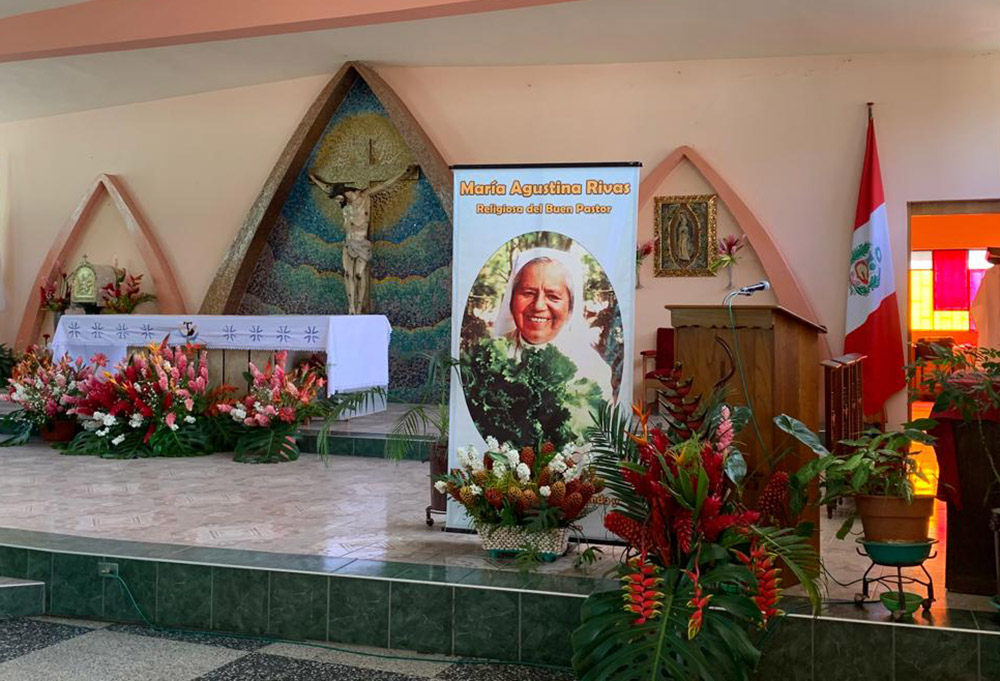 San Ramón Church in La Florida, Peru, the center of the festivities for Aguchita's beatification (Courtesy of Yvette Arnold)

In 2018, the Congregation of Our Lady of Charity of the Good Shepherd transferred her remains from Lima to La Florida where she had said she always wanted to remain, even if she died. The ceremonies were solemn, reverent and moving, with several hundred local people from the surrounding area attending.

Some people had not been to La Florida since the tragic day of Sept. 27, 1990, when Aguchita was murdered along with six other people. Some were still traumatized by the events.

One person who had experienced that day was now an adult woman; she was accompanied by a very attentive and compassionate Peruvian sister. The witness of Aguchita is still palpable today.

There is a building in the pueblo's center square that still holds the imprint of the bullets from that tragic day. It remains a symbol to the people of what happened, but with the hope that never again will their people see violence.

I was impressed by the great love that the people still have for Aguchita. One could think that she had just died. There was comfort that she was "returning" to her people, but sadness that she was physically gone from them. 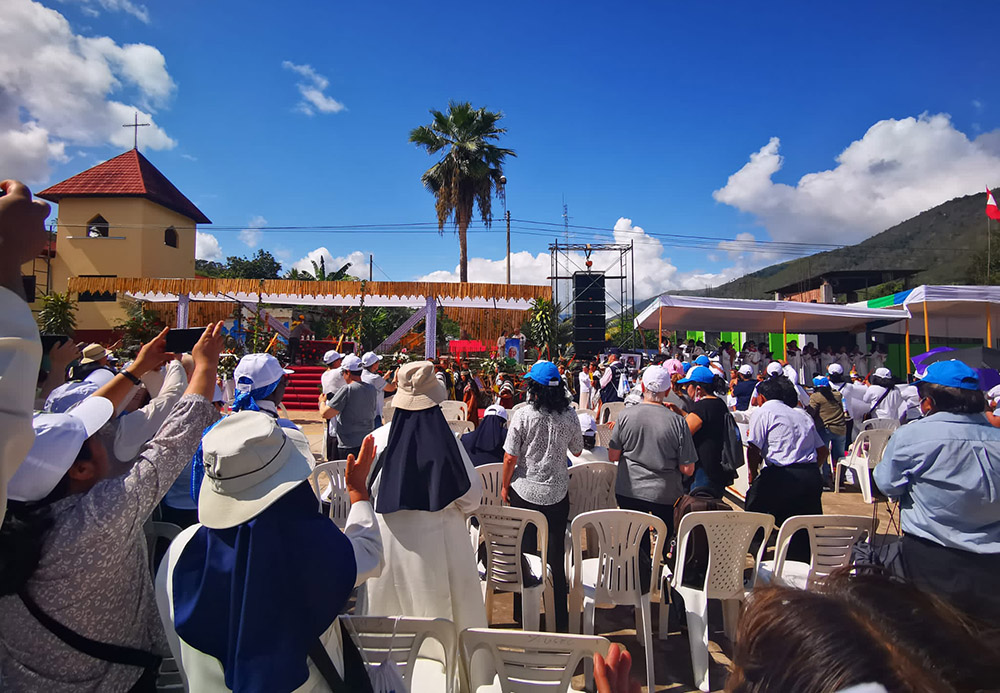 Participants gather before the beatification ceremony for Sr. María Agustina Rivas López, known as Aguchita, on May 7 in La Florida, Peru. (Courtesy of Yvette Arnold)

After the worst of the pandemic was over, the joyful news arrived that Aguchita's beatification would take place on May 7, 2022, in the Vicariate of San Ramón, Peru. There was a feeling of excitement everywhere.

A group of sisters and mission partners traveled from Rome to Peru, on what is best described as a pilgrimage — a sometimes-arduous journey to a "holy place" — the bus ride from Lima to San Ramón was eight hours!

But the exquisite beauty that surrounded us at every turn in the Andean mountains was energizing and uplifting. The mountains are filled with many minerals, and the color of many lakes reflect that — from bright green to vibrant blues to golden brown.

Our first overnight in San Ramón included a prayer vigil with testimonies from those who personally knew Aguchita, including the sisters of the community who had been in La Florida that horrific day and witnessed the event. The sharing was both emotional and inspiring.

Then the long-awaited day finally arrived. In the morning, we left San Ramón and continued into the Amazon region for a couple of hours. 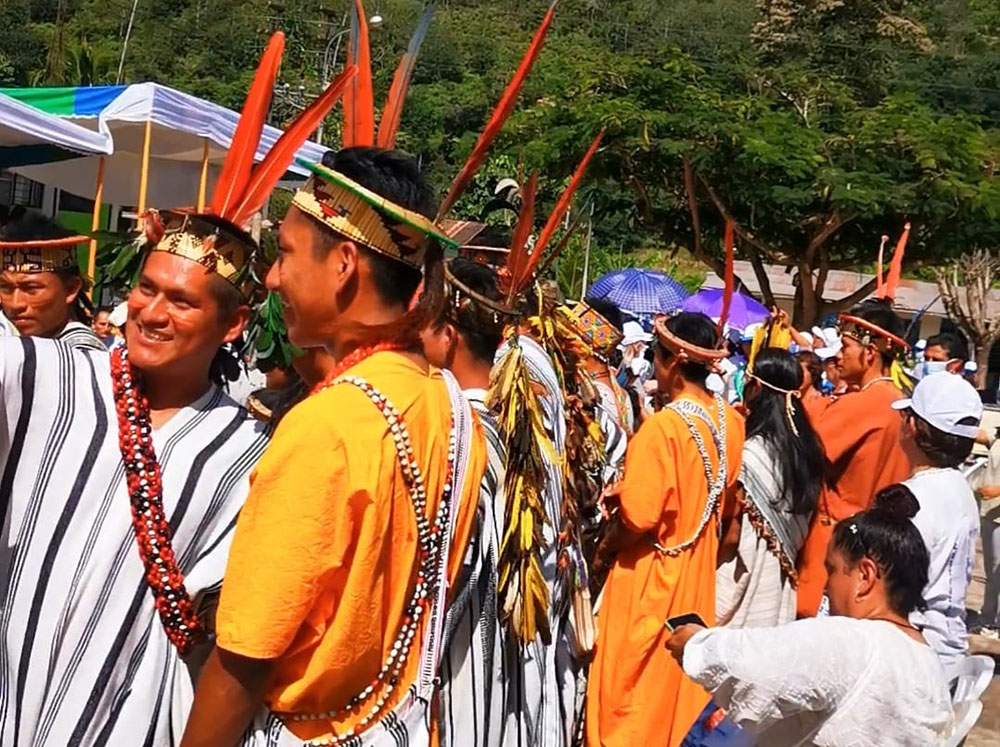 Upon arrival, what a wonderful sight to behold! Several thousand people were in attendance, many in their Indigenous dress, in this small pueblo of La Florida. What excitement! Surrounded by music and dancing, we began the ceremonies.

Through the wonder of modern technology, the ceremonies were livestreamed from deep within the Amazon — such a blessing to the millions of people within Peru and around the world who could not attend.

The entrance song voiced the reality around us: We, the children of the forest ... The birds with their songs, the fishes and reptiles. The wild beasts of the jungle ... The poor and forgotten, yearning to be free, struggling in their hope praise you, Lord.

The liturgy continued with the formal proclamation of Aguchita as "blessed" within the church and among all people. The laying down of her life as a disciple of Jesus, the Good Shepherd, was a testimony to living the Gospel of the Good Shepherd — central to the celebration.

The homily reflected her life within the social and political context of the Latin American church, its ongoing commitment to a theology of being with and for the poor, and protection of all of creation.

Aguchita herself said: To love the poor is to love life. It is to love the God of Life. Like the Shepherd she followed, Aguchita gave her life for this mission.

The ceremonies for Aguchita recognized a holy woman, an Indigenous woman of Peru claimed by her very own people, and to whom some refer to as "mamachita," little mother.

She was a pioneer in practicing integral ecology. She never wasted anything, but always found a way to "repurpose" it. Within the Amazon, she was ahead of her time in implementing the call to care for our "common home" that Pope Francis has emphasized in Laudato Si'.

After sharing so many memories of my own journey with Aguchita over the years, I am convinced that her life — one lived in simplicity and humility, with love for those living in desperate poverty — has the power to positively affect people's lives thousands of miles away from La Florida. 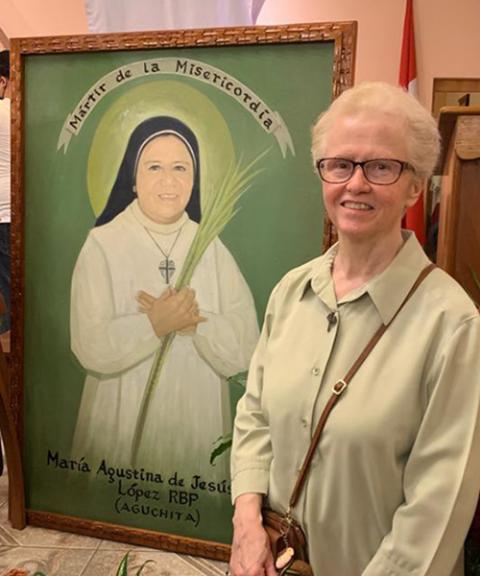 I learned that one of my sisters in New York City shared the story of Aguchita with her own group of young Spanish mothers. They found consolation in her life: Many are undocumented and have traveled treacherous journeys across the border with their children, hoping to find safety and a better life.

Perhaps the simplest message for all of us is to live our ordinary lives in an extraordinary way, to live in love for God and others, to do what we can to build a more just world in solidarity with those affected by poverty.

In this commitment, God will continue to "work on" us, like the sculptor with the clay.

On Nov. 20, 2017, the Ministry of Culture of the Government of Peru inducted Aguchita into the Museum of LUM, the Place of Memory, Tolerance and Social Inclusion. The museum — dedicated to all the victims of terrorism in Peru during the period of 1980-2000 — is a testament to those who suffered innocently and tragically at the hands of terrorist groups.

It is poignant to read Aguchita's plaque, which includes this statement: Her life is an example that we will follow to achieve an integrated and reconciled country. This call can be voiced today around our world crying out for justice, mercy and reconciliation.

Aguchita witnessed to the dignity of each person in very simple and practical ways. Each person was precious to her; she made no distinctions, welcoming each with the hope that they would experience their own goodness and inner freedom.

We can live out her example by being kind and joyful persons of peace, attentive to each person regardless of race, religion or other differences. Aguchita, be with us on our journey!