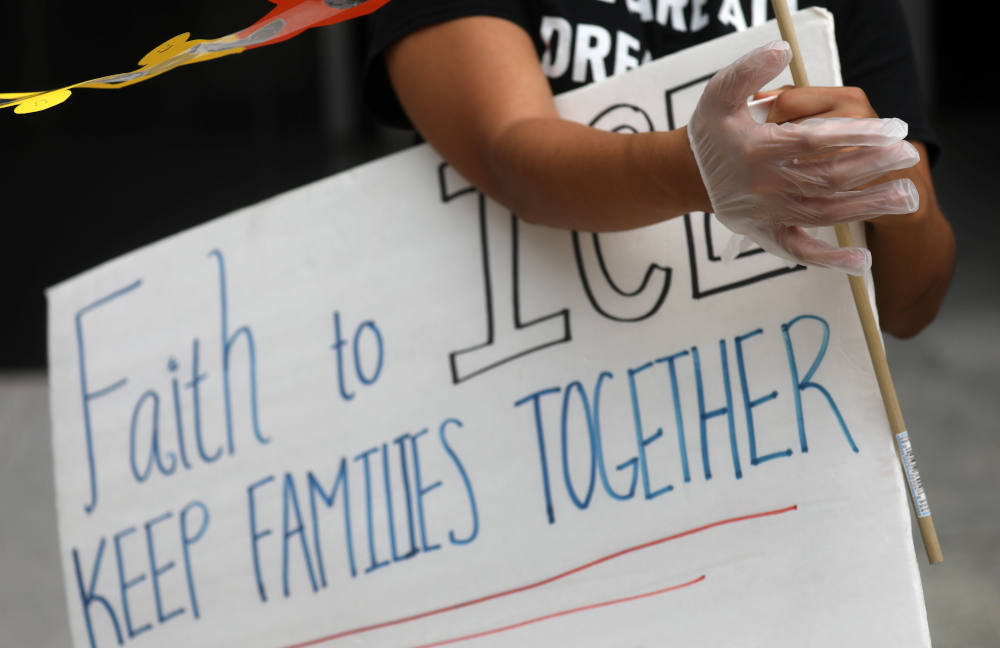 An immigration rights activist is seen outside U.S. Immigration and Customs Enforcement headquarters in Washington July 17, 2020. The agency announced July 9, 2021, that it will no longer detain most pregnant, nursing and postpartum women for deportation. (CNS photo/Leah Millis, Reuters) 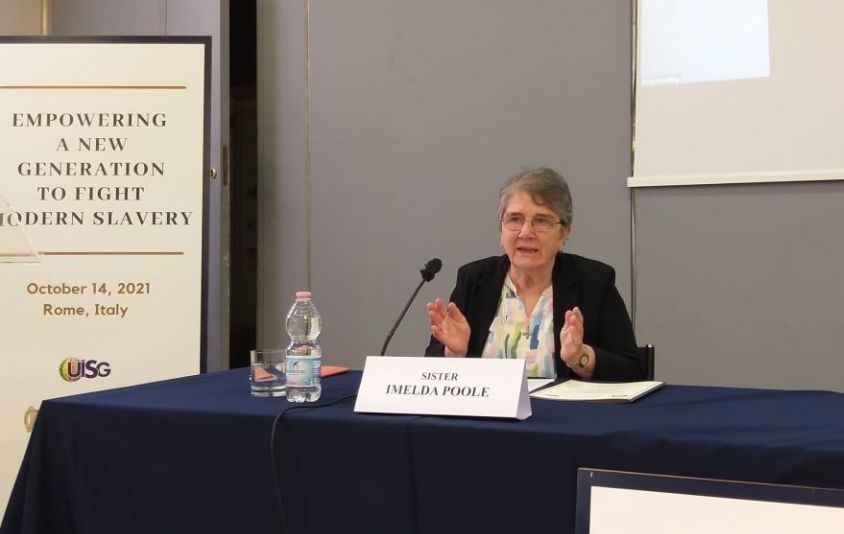 Loreto Sr. Imelda Poole speaks Oct. 14 at a panel discussion about empowering young people to help fight modern slavery. The event was sponsored by the U.S. and Irish Embassies to the Holy See in partnership with the International Union of Superiors General, the organization of leaders of women religious congregations around the world. (Courtesy of U.S. Embassy to the Holy See)

Loreto Sr. Imelda Poole, a sister of the English Province of the Institute of the Blessed Virgin Mary, participated in an Oct. 14 panel discussion about empowering young people to help fight modern slavery. The event was sponsored by the U.S. and Irish Embassies to the Holy See in partnership with the International Union of Superiors General, the organization of leaders of women religious congregations around the world.

Poole was named a U.S. Department of State Trafficking in Persons (TIP) Report Hero in July for her anti-trafficking work in Albania.

A native of Great Britain, Poole is the co-founder of the non-governmental organization Mary Ward Loreto, which addresses the root causes of trafficking, including poverty, and has been involved in the rescue and rehabilitation of trafficking survivors and victims. She is also president of Religious in Europe Networking Against Trafficking and Exploitation, or RENATE, an organization combatting human trafficking in 31 European countries.

Poole began work in Albania in 2005 and she and her staff have focused work on assisting vulnerable populations that include Roma, migrants, women and children. They have worked with more than 3,000 women, the announcement said, and have established 16 economic empowerment businesses in Albania. These "aim to decrease women's risk of exploitation by providing opportunities to participate in entrepreneurial projects in tourism, design, and education, among others."

In the past year, the organization "has fervently worked to reduce the vulnerability of individuals and families in Albania affected by the COVID-19 pandemic to human trafficking."

In a reflection Global Sisters Report published on the International Day of Prayer and Awareness Against Human Trafficking, Poole shared an anecdote about the current challenges in Albania.

"During this time of pandemic, I met a traumatized family who had been unable to pay their rent because of sudden unemployment," she wrote. "They were offered a bribe by the landlord, as an alternative to rent, to sell their daughter for prostitution in the slave trade of the trafficking market."

Poole added: "This is an offense that should be prosecuted, but will this young woman be heard? Fortunately, emergency COVID-19 funding was available for the rent, until times become better."

The National Advocacy Center of the Sisters of the Good Shepherd is hailing the U.S. Senate's consideration of the reauthorization of the Violence Against Women Act.

In an Oct. 7 statement, Fran Eskin-Royer, the center's executive director, said hearings the week of Oct. 4 "had good, positive energy with senators on both sides of the aisle indicating support. It is important that we do not waste this moment."

Eskin-Royer said it is particularly important that the hearings came during Domestic Violence Awareness Month. A particular concern for her agency, she said, is the problem of violence against women "who are uniquely vulnerable as immigrants where their immigration status is tied to their abuser."

One of the agency's caseworkers in Atlanta, Eskin-Royer said, works with "clients who are treated abusively by their spouses but can't leave the marriage because their green card depends on it."

"They are afraid of their spouses and of having to return to their home countries."

The reauthorization of the Violence Against Women Act, first enacted in 2019, "has the potential to directly help, establishing a pilot program that will allow some immigrant domestic violence victims and their children to apply for lawful temporary status independent of their abusers," the agency said in a statement.

Such a provision, the agency said, would help save lives of immigrant women experiencing domestic violence. The reauthorization legislation being considered in the Senate includes allowing women and children to apply for lawful temporary status.

The center is an advocacy and education group that reflects "the spirituality, history and mission of the sisters of the Good Shepherd." It advocates at the federal level for people living in poverty, immigrants, survivors of human trafficking, survivors of domestic abuse, and other vulnerable populations.

The Conrad N. Hilton Foundation awarded its annual Hilton Humanitarian Prize to CAMFED, the Campaign for Female Education, in an online ceremony Oct. 13.

CAMFED is a pan-African movement whose work is similar to that of many Catholic sisters ministering in Africa: It addresses "poverty, inequality and injustice by supporting girls and young women often excluded from the opportunity to go to school, to learn, thrive, and become leaders and changemakers in their communities," the foundation said in announcing the award.

The $2.5 million Conrad N. Hilton Humanitarian Prize is the world's largest annual humanitarian award presented, the foundation said, "to a nonprofit organization judged to have made extraordinary contributions toward alleviating human suffering."

News of CAMFED winning the award was first made public in August.

The Conrad H. Hilton Foundation is a key funder of Global Sisters Report. 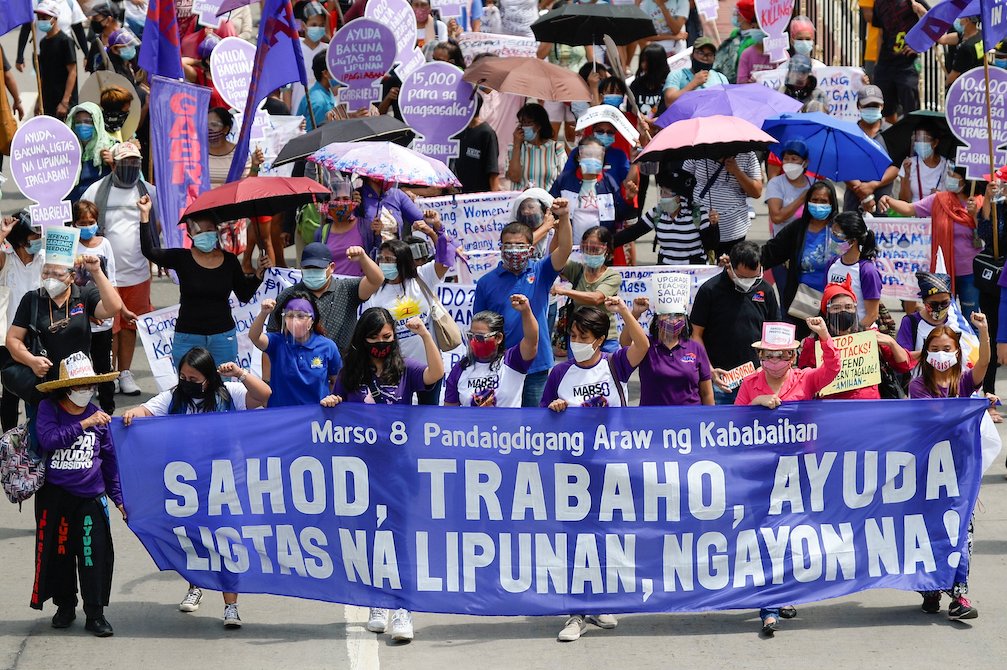 The index provides a comprehensive measure of women's status in 170 countries. Among the topics covered in this year’s index is a focus on the effect of the pandemic on women’s inclusion and security; the status of women in Afghanistan, Pakistan and the U.S.; and the status of displaced women in five African nations.

During the event, panelists will discuss global and regional trends, and persistent and newly revealed gaps in the status of women.

The Georgetown Institute for Women, Peace and Security was launched in 2011 to examine and highlight the roles of women in fostering global peace and security.