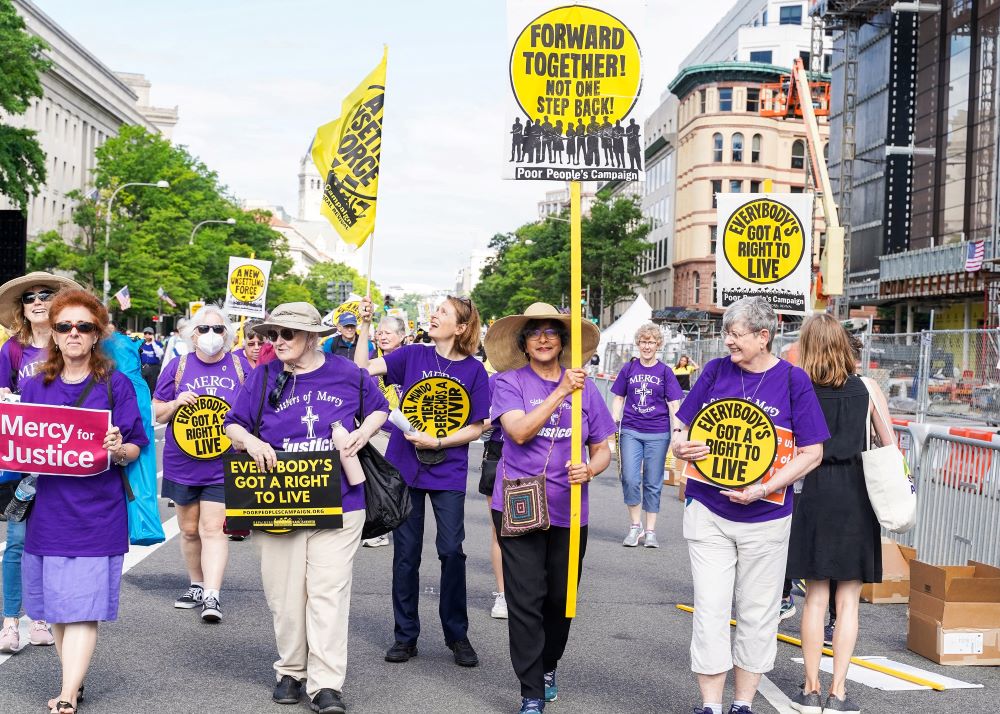 Monday Starter will not be published July 4 because of the Fourth of July federal holiday in the United States.

More than 50 Sisters of Mercy and their associates and co-workers joined the Poor People's and Low-Wage Workers' Assembly and Moral March on Washington and to the Polls, a June 18 gathering of thousands in Washington, D.C., that demanded a government and society that lifts all people.

At the march, organized by the Poor People's Campaign, organizers said "tens of thousands of people lined Pennsylvania Avenue and even more watched online as impacted people shared their stories involving voting rights, the nation's failure to respond to COVID, especially among poor communities, workplace rights, the need for health care and living wages, and the day-to-day struggle of not having enough money to survive."

The Sisters of Mercy said the goals of the march align with their own.

"The Poor People's Campaign is building power for an agenda that lifts all people by challenging the interlocking injustices of systemic racism, poverty, ecological devastation, the war economy and the false moral narrative of religious nationalism," the congregation's justice team said in a statement. "[It's] no wonder that the Sisters of Mercy of the Americas are partners in this movement as our Critical Concerns are aligned with this agenda." 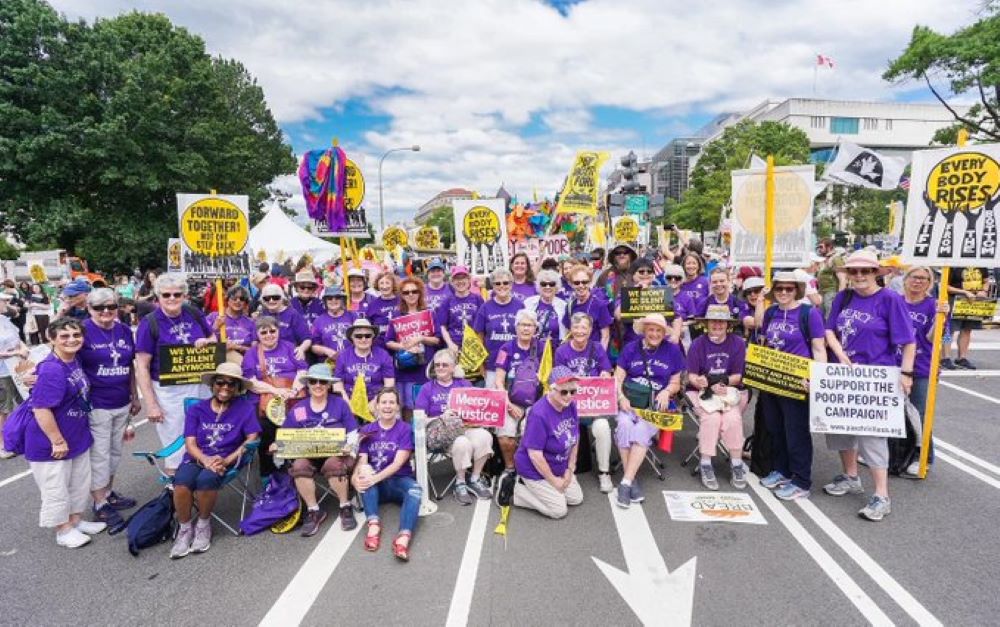 More than 50 Mercy sisters, associates and co-workers take part in the Poor People's and Low-Wage Workers' Assembly and Moral March on Washington and to the Polls on June 18 in Washington, D.C. (Courtesy of the Sisters of Mercy)

Mercy Srs. Joan Serda and Marilyn Graf spent many, many hours on a bus to attend from Mobile, Alabama.

"It cost me $205 to ride the bus, and I don't know how many poor people can afford that," Serda said. "I'm going to try to be a voice to those who are poor and cannot speak up."

The Sisters of Mercy are a mobilizing partner for the Poor People's Campaign. The campaign says 140 million Americans are poor or one emergency away from economic ruin.

Sisters of Charity Federation marks 25 years at the UN

The Sisters of Charity Federation is marking 25 years of advocacy at the United Nations, work that its current representative says can often be slow and deliberate but remains important in bringing underrepresented voices to international forums. 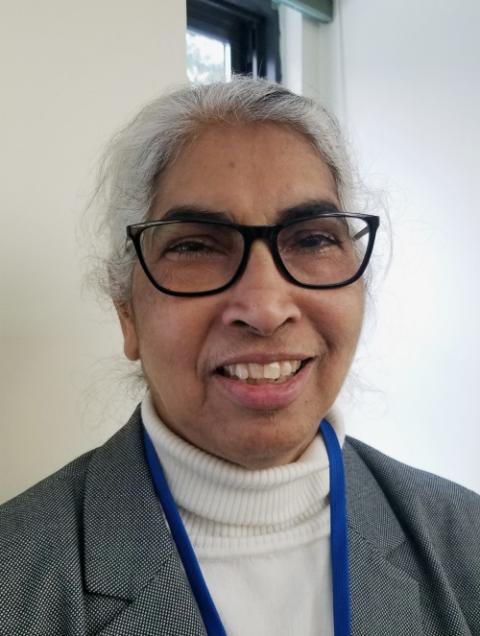 "This is the place we need to be," Sr. Teresa Kotturan, the federation representative and a member of the Sisters of Charity of Nazareth, Kentucky, said in a recent interview following a June 15 online celebration of the anniversary of the federation's work at the U.N.

The federation is one of more 5,000 nongovernmental organizations accredited at the United Nations. Nearly 30 of them represent 100,000 religious serving more than 200 congregations globally.

"Through networking and collaboration, we do it together," said Kotturan, who has been the federation representative since 2015. "You are not doing this work as a single organization, but as a coalition."

Working in coalition has yielded successes, she said, including securing language in the United Nations' 2030 Agenda for Sustainable Development calling for safe drinking water and sanitation as a basic human right.

Other successes, Kotturan said, include the work done in securing resolutions by the U.N. General Assembly seeking an end to global homelessness and landmark U.N. meetings on homelessness in early 2020. Also notable: helping secure a compact on global migration in 2018.

In the anniversary video, Sr. Maria Goetschalckx, one of Kotturan's predecessors and a member of the Sisters of Charity of Seton Hill, touted the sense of fairness and equality that sister representatives bring to the U.N. proceedings.

Goetschalckx also noted in the video that the U.N.'s 17 sustainable development goals are in accord with the world's varying faith traditions.

"The development goals," she said, "really line up with every world religion."

Sisters of St. Joseph of Peace divest from fossil fuels

The Congregation of the Sisters of St. Joseph of Peace announced June 22 that their investment portfolio is now 100% free of fossil fuels.

"We worked with our investment advisors to put our values into action," Melody Maravillas, the congregation's CFO, said in a statement announcing the divestment. "In the past we have held on to some investments in fossil fuels to engage in shareholder advocacy. Our Investment Policy has now been updated to exclude direct equity and fixed income investments in fossil fuel companies as identified by the Carbon Underground 200."

The action follows a 2008 commitment to reduce the community's carbon footprint and to pray, study and act to promote a sustainable lifestyle, according to the statement. The sisters have developed a land ethic that names sustainability as an urgent religious and moral challenge and made a commitment in 2021 to a seven-year plan to achieve ecological sustainability and participate in the Laudato Si' Action Platform.

"Pope Francis has called the global church to a conversion of heart, as we listen to the cries of Earth and the cries of people living on the margins," Sr. Susan Francois, assistant congregation leader and treasurer, said in the statement. "We believe that care of creation is an essential element of peacemaking. The time is now to act. We have a fiduciary responsibility to Earth."

The congregation's charism is to promote social justice as a path to peace.

"Today we see the ethical use of our financial resources through the lens of our vow of poverty," Francois said in the announcement. "We decided it was morally imperative to divest fully from carbon rather than profit from activities which hasten the climate crisis." [

Sr. Ellen Dauwer will leave her role as executive director of the Religious Formation Conference when her term ends Dec. 31.

Dauwer, a Sister of Charity of St. Elizabeth, has served two terms in the position.

"Sister Ellen's two terms at the helm of the Conference have been exemplary," says an announcement signed by board co-chairs Sr. Nancy Gerth, a member of the Sisters of Charity of Nazareth, and Fr. Richard Hall of the Missionary Oblates of Mary Immaculate. "She's been instrumental in cultivating new programs such as Together and the InterCongregational Collaborative Novitiate (ICCN) as well as the creation of a new portal of formation resources." 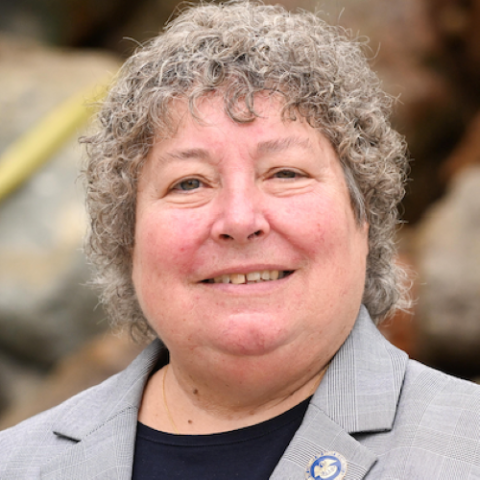 Sr. Ellen Dauwer of the Sisters of Charity of St. Elizabeth (Courtesy of the Religious Formation Conference)

"Equally important, however, has been her commitment to and skill at collaborating with organizations that serve religious life, establishing programming and other shared initiatives," the announcement says. "An avid believer in using technology for good, Ellen has elevated the Conference's visibility using revitalized marketing materials, social media engagement, and member outreach."

Dauwer also oversaw the national office's move from Washington, D.C., to Chicago, where it is closer to more houses of formation and partners that serve religious life.

The Religious Formation Conference is accepting applications for a new executive director and hopes to fill the position by the fall.

Related: Yearlong novitiate program is open to novices from any congregation

All United Nations member-states adopted the sustainable development goals in 2015 to end poverty, protect the planet and ensure that all people enjoy peace and prosperity by 2030.

BuzzFeed News published a story June 15 showing what happens when development is focused on profit rather than sustainability, even when it purports to be doing good.

After a 2010 earthquake in Haiti devastated much of the island nation — which was already the poorest in the Western Hemisphere — the Caracol Industrial Park was announced in 2012 with much fanfare. Heads of state, actors and business moguls flew in to kick off the project, which promised to create 65,000 jobs and change lives. 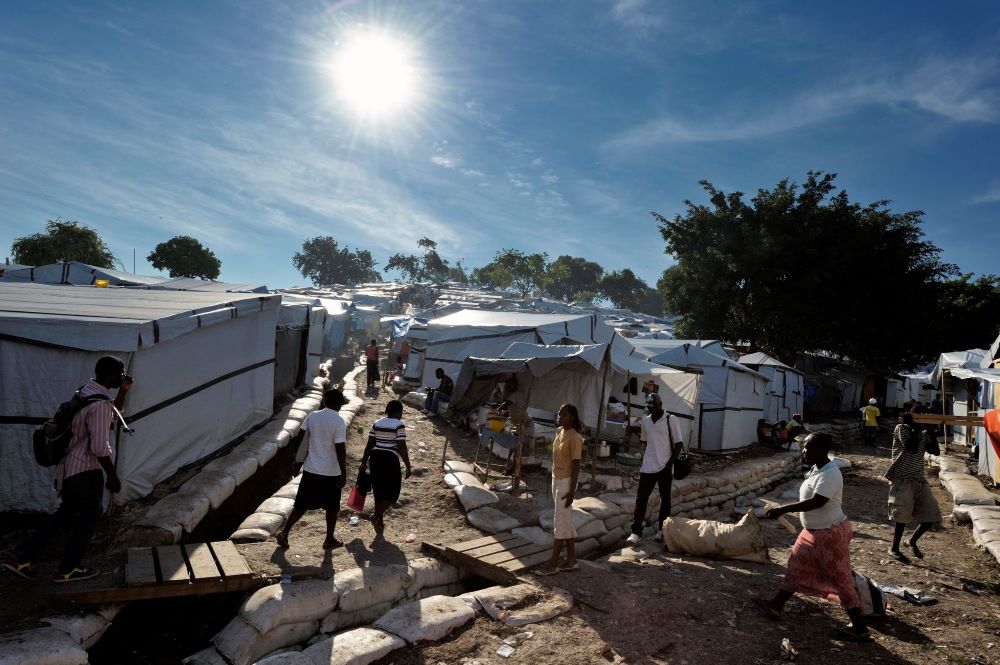 People go about their daily activities in a tent city of Haitian earthquake survivors on a former nine-hole golf course in Port-au-Prince, Haiti, Oct. 22, 2010. The Petionville Club hosted more than 44,000 people left homeless after the Jan. 12, 2010, earthquake. (CNS/Paul Jeffrey)

What officials behind the project didn't mention was that the park was being built on 600 of the most fertile acres in the area around Caracol, about 130 miles north of Port-au-Prince, which were home to more than 400 farms and 3,500 people. The government marked off the land and gave residents five days to leave, according to BuzzFeed News. The landowners were promised compensation for their land and scholarships for their children in addition to the new prosperity the industrial park would bring to everyone in the area.

First, the compensation was delayed, then scaled back dramatically, BuzzFeed News reported. Those who did get compensation said it was only enough to last a few months, meaning they became farmers without land or income. The scholarships never happened.

And the 65,000 jobs that would change lives? So far, only 15,000 have actually been created, and many of those pay starvation wages, BuzzFeed News reported, trapping citizens in the same generational poverty they were in before but now making a profit for international corporations.

If this sounds familiar, it is: Global Sisters Report reported in 2015 how groups such as the Maryknoll Office for Global Concerns were addressing the issue. Seven years later, about the only thing that has changed is that all sides came to an agreement in 2018 to compensate those who lost their land, but BuzzFeed News reports that even under those provisions, compensation has been slow or inadequate.