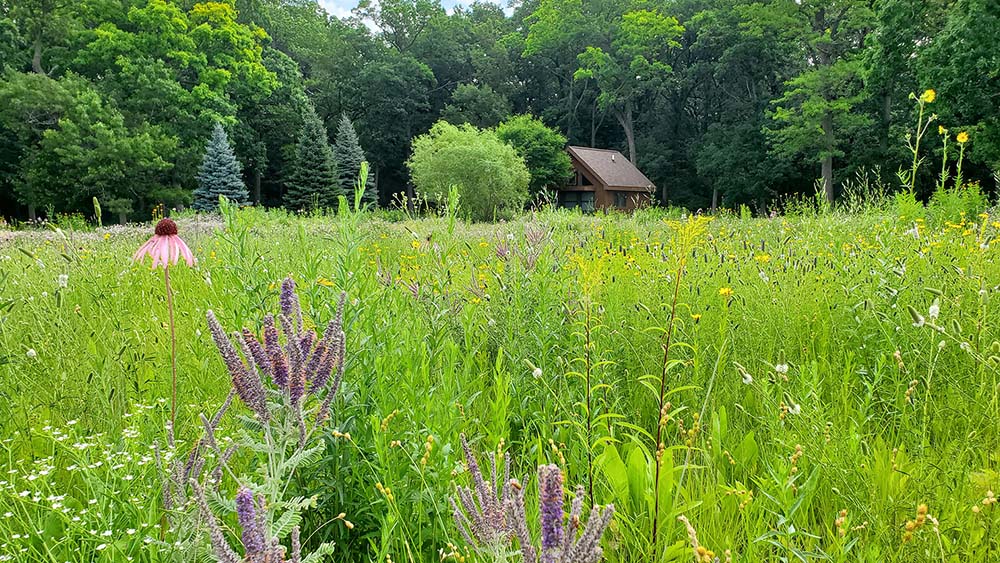 Another 233 acres have been protected from commercial development in perpetuity thanks to a congregation of sisters.

The Congregation of Sisters of St. Agnes, based in Fond du Lac, Wisconsin, signed a conservation easement document in partnership with the Glacial Lakes Conservancy earlier this year. The land is home to the order's motherhouse as well as forest, prairie, wetlands, farm fields, a cemetery, labyrinth and nature trails. Three stream channels run down a geological feature known as the Niagara Escarpment, hard dolomite rock exposed by glaciers several thousand years ago.

Though the easement was signed in January, the formal recognition is set for Earth Day, April 22, when a small, private ceremony with sisters, local officials and environmentalists will take place in person but will be livestreamed for anyone to watch on the congregation's YouTube channel. There will also be a public ribbon-cutting that day, and the grounds will be open until dusk for anyone who wants to tour them.

Under the partnership with Glacial Lakes Conservancy, the sisters will continue as owners and caretakers of the land while the conservancy upholds the provisions of the easement. 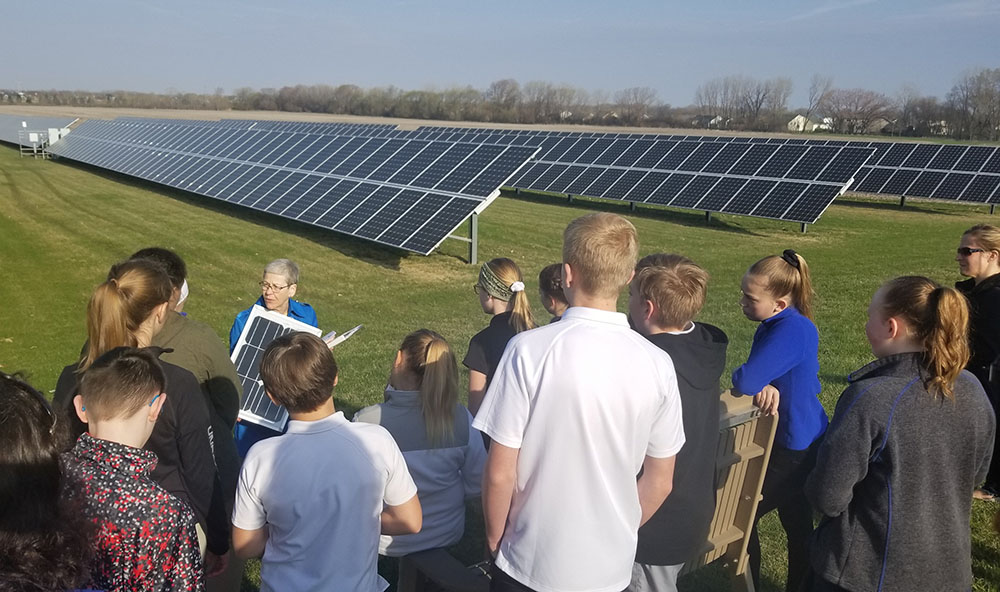 The conservation easement follows the announcement in November that the congregation had moved to getting 100% of its electricity from solar power. The sisters installed an 881-panel solar array at the convent in 2015 that provided 50% of their electricity, and in 2021, they purchased blocks in a solar garden under construction by Alliant Energy. The solar garden allows Alliant customers to purchase parts of a large community array in return for electric credits, so they can generate solar power without having to install solar panels themselves.

In addition to purchasing blocks for themselves, the sisters purchased 197 blocks to donate to the St. Vincent de Paul Fond du Lac County's St. Katharine Drexel Shelter, which, when completed later this year, will be Fond du Lac's first standalone homeless shelter.

"We are committed to the care for creation and want to extend that care and sustainability to St. Vincent de Paul as they build a much-needed shelter for those in need in the Fond du Lac community," Sr. Jean Steffes, the congregation's general superior, told WisBusiness.com. "Our gift to them is a win-win. Shelter is needed and clean energy is needed. Our hope is the solar block donation will help sustain the shelter's operations by reducing their energy expenses for the 20-year life of the solar garden."

Related: An estate plan for the Earth

FutureChurch is sponsoring more webinars in its series on the history of women in the church, "Women Erased."

The presentations "uncover the many ways women's leadership, witness, and ministries have been erased from our Church's Scriptures and Lectionary, historical record and memory, and communities," according to the group's website. 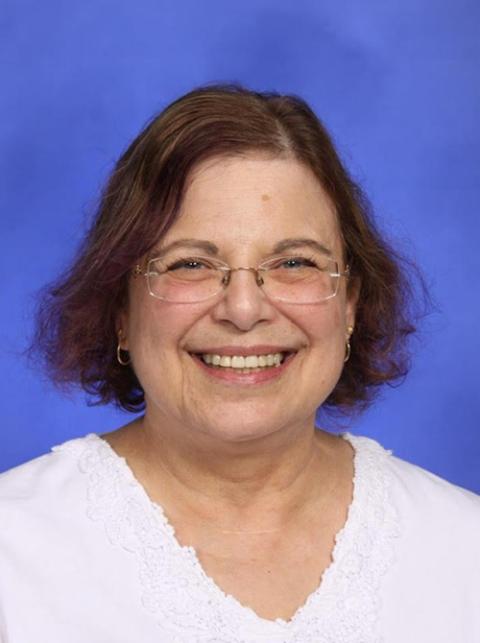 Two presentations are by Margaret Susan Thompson, a historian at Syracuse University who studies Catholic sisters and race in the United States and is an associate with the Sisters, Servants of the Immaculate Heart of Mary. Her sessions, scheduled for April 5 and April 26, are on the history of women religious and resistance. All sessions begin at 8 p.m. Eastern time.

"This presentation will reveal the perhaps surprising history of [sisters'] resistance and suggest ways we can all learn from their experience as we work collaboratively to build a future church that is more egalitarian and supportive for all believers," the description says.

Another session April 28 will examine the history of Mary Magdalene, including how she became known as "Magdalene" and how the title may mean "the magnified one" or "tower-ess" instead of being a reference to an obscure town in Galilee.

The presentations are free, but registration is required.

Conference on the History of Women Religious is coming up

The University of Notre Dame's Cushwa Center for the Study of American Catholicism will host the 12th triennial Conference on the History of Women Religious.

The conference runs June 26-29, with all events taking place in the Notre Dame Conference Center in McKenna Hall at the University of Notre Dame in Notre Dame, Indiana.

"Throughout their histories, women religious have celebrated and struggled with many aspects related to diversity in their personal lives, congregational histories, and ministries," the conference website says. "At the same time, their work has often focused on upholding the 'dignity of the human person,' particularly the dignity of women. This conference seeks to explore aspects of diversity and dignity within the history of women's religious congregations around the world."

The conference's keynote address will be by Diane Batts Morrow, author of Persons of Color and Religious at the Same Time: The Oblate Sisters of Providence, 1828-1860, which received the Distinguished Book Award from the conference in 2004. She will present her research on the Oblate Sisters, the first religious community for Black Catholic women in the United States.

The conference will also feature Margot Fassler, the Keough-Hesburgh Professor of Music History and Liturgy at the University of Notre Dame. For the past seven years, Fassler has been working on a digital model of the 12th-century Benedictine abbess Hildegard of Bingen's vision of the cosmos, the so-called "Cosmic Egg."

Art exhibit to feature the work of Sr. Dennis Frandrup

The Haehn Museum at St. Benedict's Monastery in St. Joseph, Minnesota, will open its 2022 exhibit, "By the Work of Her Hands," featuring artwork by Benedictine Sr. Dennis Frandrup, on April 21. 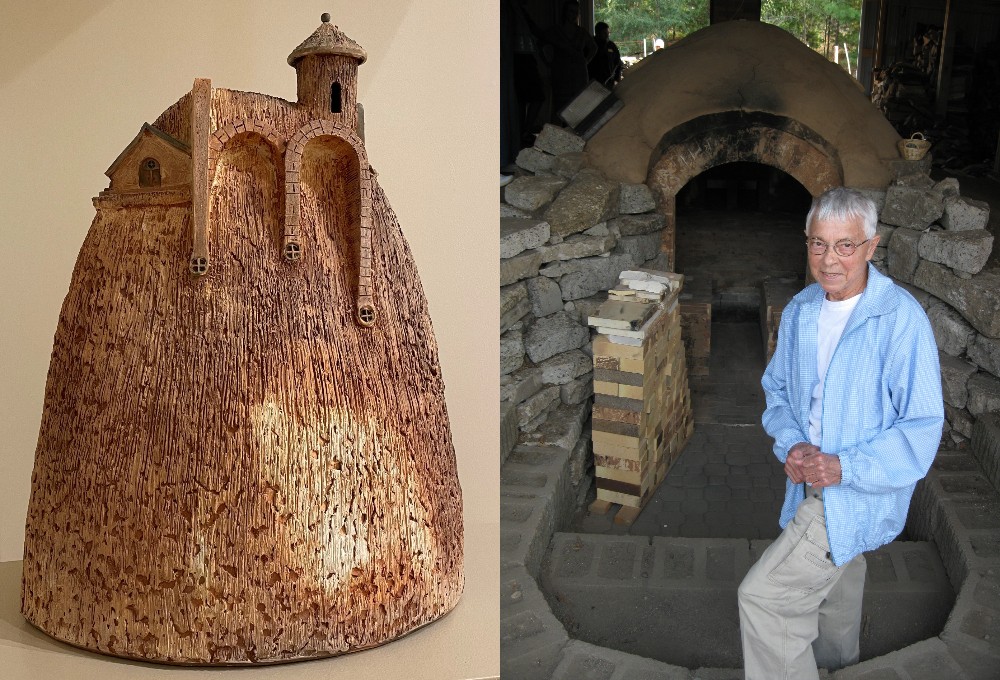 Left: "Memory Village," a clay sculpture by Sr. Dennis Frandrup representing generations of Benedictine life. Right: Frandrup poses with the Sister Dennis Kiln at the College of St. Benedict in St. Joseph, Minnesota. The kiln was dedicated in her honor in 2012. (Photos courtesy of the Haehn Museum)

Frandrup was a professor of ceramics at the University of St. Benedict and St. John's for 30 years and has been producing art for more than 50 years. The college's ceramics kiln is named for Frandrup in recognition of her work.

The exhibit "celebrates the vast array of art forms mastered by the hands of Sister Dennis" and runs through Dec. 23.