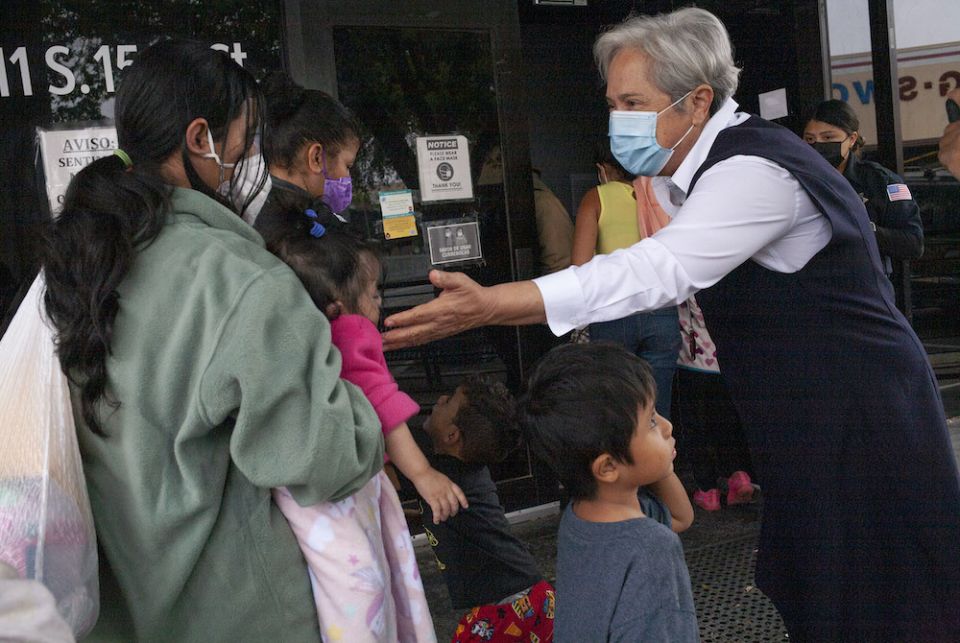 Sr. Norma Pimentel, a member of the Missionaries of Jesus and executive director of Catholic Charities of the Rio Grande Valley, greets newly arrived immigrants March 23 at the Humanitarian Respite Center in McAllen, Texas. At the temporary shelter, volunteers help make travel arrangements and coordinate COVID-19 testing before immigrants proceed to other parts of the United States. (Nuri Vallbona)

I was blessed to see Sr. Norma Pimentel speak several times in a span of three months in 2019. During one of those times, it occurred to me how similar her work is to that of St. Teresa of Kolkata, best known for ministering to India's "untouchables." Today, refugees around the world are reviled, rejected, homeless and in extreme danger — in short, untouchable.

Pimentel, a Missionaries of Jesus sister, is executive director of Catholic Charities of the Rio Grande Valley in Texas and runs the Humanitarian Respite Center along the U.S.-Mexico border. She and her army of volunteers have ministered to tens of thousands of people many in the United States do not want, and when the Trump administration's Migrant Protection Protocols, also known as the "Remain in Mexico" policy, left Pimentel's center with almost no one to serve, she crossed the border daily and ministered to the thousands waiting in squalid conditions there.

She has won numerous awards for her work. She was named one of Time magazine's 100 most influential people of 2020, received the Leadership Conference of Women Religious' Outstanding Leadership Award in 2019, and was personally praised by Pope Francis in 2015.

Now, she's using her status to advocate the highest levels of government for help for refugees.

In an open letter to President Joe Biden published Sept. 6 in the Washington Post, Pimentel appealed "to your sense of morality, human dignity and as a fellow Catholic."

On his first day in office, Biden moved to rescind the "Remain in Mexico" policy, which requires most people seeking asylum in the United States to wait outside the country until their cases can be heard. But a federal judge ordered the policy to remain in place until the administration makes a better case for ending it, and the U.S. Supreme Court refused to step in while the case is on appeal.

But Pimentel says that is no excuse.

"In the name of God and in the spirit of decency that has been a hallmark of Americans for generations, I beseech you: If this policy must continue, let us find a way to end the worst cruelties that have defined it thus far," she wrote. 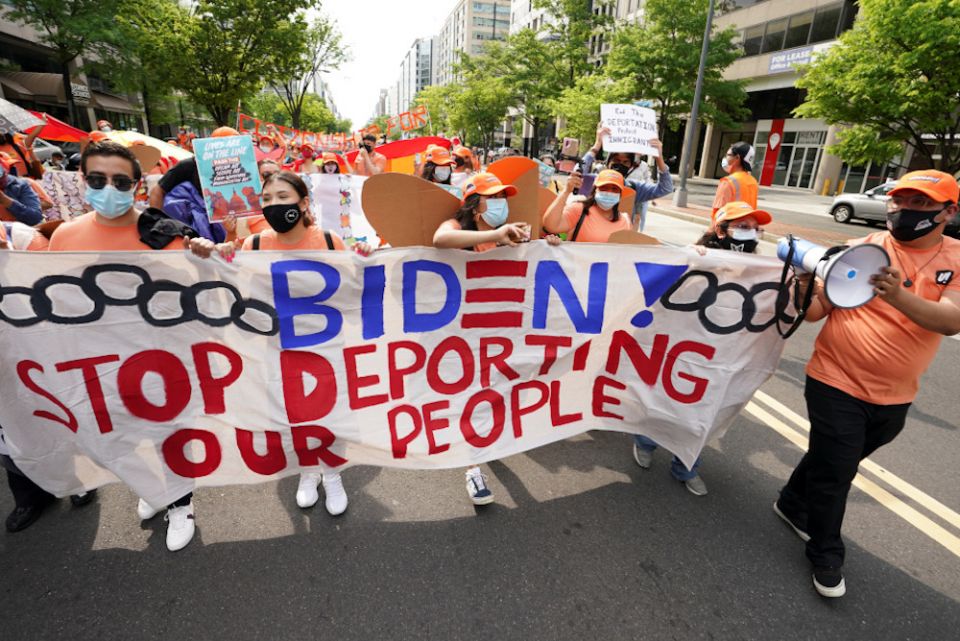 Immigration advocates hold a demonstration near the White House in Washington April 28 calling on President Joe Biden to secure a path to citizenship for immigrants living in the country illegally. (CNS/Reuters/Kevin Lamarque)

What does a new sister do with her old stuff?

When a woman enters a religious congregation, most of the focus is, understandably, on the ceremony involved. But Liz Dodd has been tweeting about a more practical side: moving.

Dodd, formerly a writer and editor at The Tablet in London, is entering the Sisters of St. Joseph of Peace. She was featured in a Catholic News Service story in March about entering a religious congregation during the pandemic, when most interactions have to be virtual.

Until entering the novitiate, she had only seen her sisters-to-be face to face for one weekend. Now, she has to figure out what to take and what to leave behind.

"One of the questions I get asked most when I tell people I'm becoming a Sister (*nun) is 'what about all your stuff?' So as I'm packing, I thought I'd debunk some myths! Here's what's coming with me to my novitiate at our new House of Hospitality," Dodd tweeted Sept. 4.

So, what is she taking?

Clothes and shoes, including "a giant Star Wars Jedi bathrobe"; her yoga gear, which helps her joints after an around-the-world bicycle trip; a prayer desk; and many things to share with her sisters, including her collection of vegan cookbooks, pillows, and two cases of French wine. All of which, she is sure, will be put to good use.

She's also bringing one thing she couldn't bear to leave behind:

"My most prized charity shop find, a Triceratops footstool, with a hidden compartment that's just right for a Breviary," she tweeted. Of course, it can hold other things, as well, such as "my very ancient collection of nail varnishes."

My most prized charity shop find, a Triceratops footstool, with a hidden compartment that's just right for a Breviary. Or, currently, my very ancient collection of nail varnishes [6] pic.twitter.com/Difu6OWMAW

She responded to other sisters replying to her tweet about what they took and left behind, tweeting: "It's a strange strange mix of excitement and joy and nostalgia and grief, isn't it? But I'm surprised by how strongly I feel (helped along by this Twitter thread) that as one door is closing, another one is standing wide open!"

She also wanted to make sure the world knows that while sisters may make a radical choice to serve God, they're also real people, sometimes with crazy footstools they love.

"When I was discerning I saw a lot of dour Tweets from women who'd been told they were allowed three pairs of socks and a sensible coat and nothing else, and I thought the world needed to know about my Triceratops and Campari," she wrote. 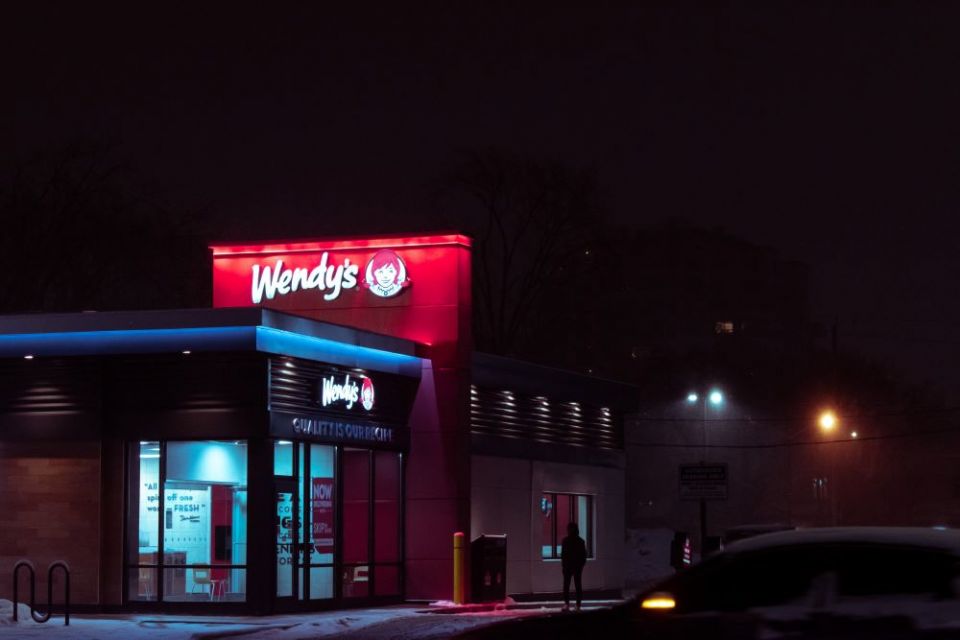 Since the Coalition of Immokalee Workers and Alliance for Fair Food's Campaign for Fair Food began in 2001, they've won 14 legally binding agreements. Wendy's has been a holdout, and the coalition organized an ongoing boycott of the burger chain in 2005. (Unsplash/Batu Gezer)

When you're eating fast food, the last thing you may be thinking about is human trafficking. But that Wendy's Big Bacon Classic might be contributing to the problem, and a webinar from the U.S. Catholic Sisters Against Human Trafficking called "Slavery in our Tomatoes" explained how.

The webinar, which took place Sept. 1 and can be viewed here, features the Alliance for Fair Food, an association created in part because of Coalition of Immokalee Workers. It is billed as a chance to learn how food choices matter in working to end human trafficking.

According to its website, the Coalition of Immokalee Workers was formed in 1993 to fight the human rights abuses, systematic wage theft, sexual harassment, health and safety violations, and, in the most extreme cases, modern slavery that Florida farmworkers face. But after a decade of work, the coalition realized the growers were almost as powerless as the farmworkers because the growers were beholden to a consolidated retail food industry that used its purchasing power to demand ever-lower prices.

The Coalition of Immokalee Workers and Alliance for Fair Food's Campaign for Fair Food began in 2001, working to get some of the world's largest food retailers to agree to raise standards for the farmworkers harvesting their products. Since then, they've won 14 legally binding agreements with major players such as Taco Bell, McDonald's and Walmart, giving farmworkers the right to shade and water in the fields; the right to file a complaint without fear of retaliation; the right to work free from sexual harassment and modern slavery; and more.

One notable holdout, though, has been Wendy's, and the coalition organized an ongoing boycott of the burger chain in 2005.

Webinar: Slavery in our Tomatoes