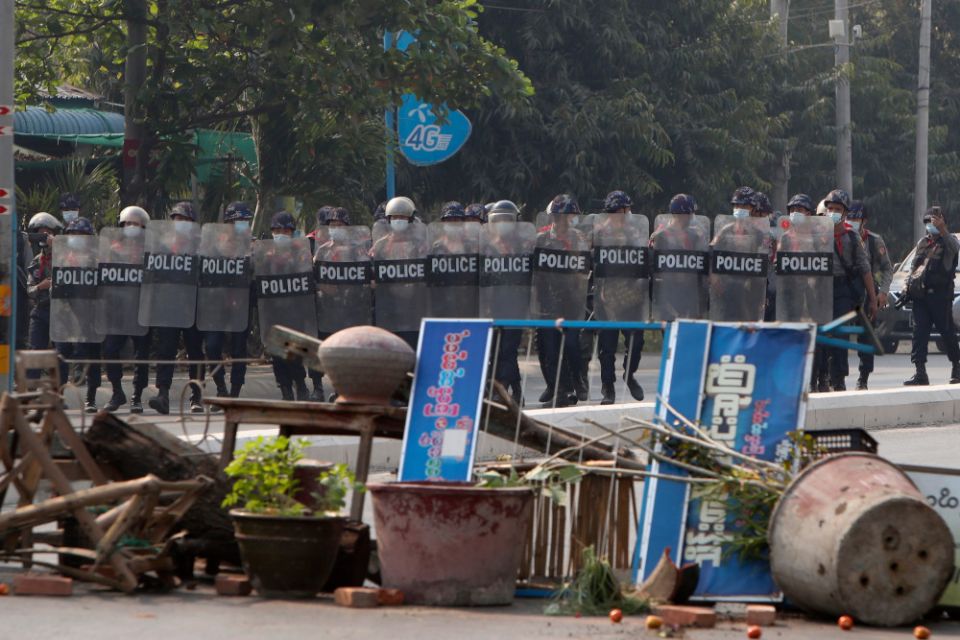 Myanmar riot police with shields move forward during a protest against the military coup in Mandalay, Myanmar, Sunday, Feb. 28, 2021. Police fired tear gas and water cannons and there were reports of gunfire Sunday in Myanmar's largest city Yangon where another anti-coup protest was underway with scores of students and other demonstrators hauled away in police trucks. (AP Photo)

Vatican City — A Catholic nun, kneeling before armed forces in Myanmar and begging them not to open fire on protesters, has become a symbol for the protests against the military coup that destabilized the country in February.

"Today the protests were serious on a national level," the cardinal wrote on Twitter. "Police are arresting, beating and even shooting at people. In tears, Sister Ann Nu Thawng begs and stops the police from arresting protesters."

On Feb. 1, military forces in Myanmar, formerly known as Burma, quashed the electoral victory of Aung San Suu Kyi, who won the Nobel Peace Prize for her resistance against the military regime and who has been president of the National Democracy League party since 2011. The military enforced a state of emergency after calling the elections fraudulent and arrested Suu Kyi.

Pro-democracy protests, followed by violent repressions by military armed forces, have racked the country since the coup. On Feb. 28, more than 30 protesters were wounded, and 18 people died at the hands of the military.

Speaking to the Catholic news agency Fides, Joseph Kung Za Hmung, director of the first Catholic paper in Myanmar, said that Thawng's actions "shocked many of us."

Her protest, he added, "allowed over 100 protesters to find refuge in her convent. She saved them from a brutal beating and police arrest."

Kung Za Hmung praised the Catholic nun as "a model for church leaders," who "are called to get out of their comfort zones and be inspired by her courage."

Pope Francis made an appeal for peace and democracy in the country during his general audience on Mar. 3, where he asked local authorities to ensure "that dialogue prevails over repression and harmony over discord."

Francis appealed to a future where "hatred and injustice make way for encounter and reconciliation," and urged military authorities to promote democracy "through the concrete gesture of the release of the various political leaders imprisoned."

The U.S. Bishops' Conference also echoed Francis' appeal "for dialogue as a way forward toward peace and reconciliation." In a statement signed by Bishop David J. Malloy of Rockford, chairman of the U.S. bishops' Committee on International Justice and Peace, bishops asked the U.S. government to "carefully consider" the insights provided by the local church on the current crisis and its possible resolution.

"As protests continue in Myanmar, I call on all Catholics and people of good will to pray for the people and leaders of this land," the statement concluded.

A time of hope for social leaders of Oaxaca Archdiocese