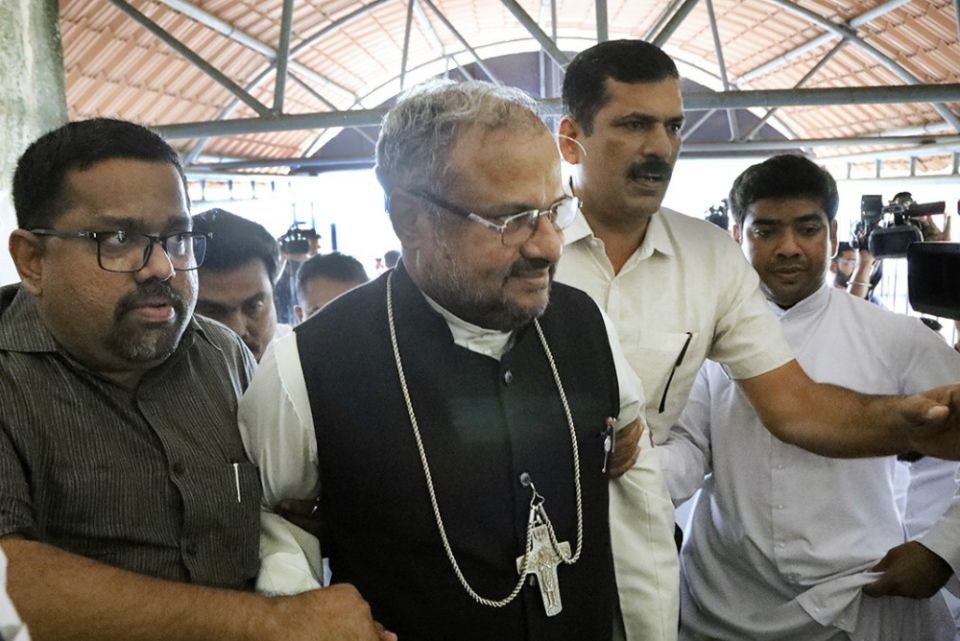 Bishop Franco Mulakkal of Jalandhar, center, enters the portico of the Additional District and Sessions Court in Kottayam, Kerala, Nov. 30, 2019, to stand trial in the rape of a nun. (M.A. Salam)

Kottayam, India — A district court on March 16 rejected a defense application to dismiss the rape case against Bishop Franco Mulakkal and directed him to stand trial next week, a source inside the hearing said.

The order from the District and Sessions Court in Kottayam has intensified the demand from some groups that the church should remove Mulakkal as the bishop of Jalandhar, a diocese in the northern Indian state of Punjab. As in the last few court sessions, the March 16 proceedings were closed to the media and the public.

The court directed Mulakkal to appear for trial on March 24.

On that date, Judge G. Gopakumar will hear arguments on two petitions: one to ban media from covering the trial, the other to find the prosecution and the media in contempt for publicizing records without court permission.

"Yes, it is true the court has dismissed Mulakkal's application to discharge him from the case," Jithesh J. Babu, the public prosecutor, told Global Sisters Report outside the courtroom.

The court order came after more than 15 hours of closed-door hearings in three court sessions.

Mulakkal's senior advocate, Raman Pillai, argued for almost 10 hours in the three sessions that the prelate is innocent.

The public prosecutor objected to dismissing the case and cited the recorded evidence to assert the bishop was guilty.

Babu said the court found enough reasons to believe there is a case against Mulakkal after going through the charge sheet against him. "Now he has to face the trial," the prosecutor added.

Mulakkal is accused of raping the former superior general of the Missionaries of Jesus 13 times between 2014 and 2016 at a convent in Kuravilangad near Kottayam.

The congregation functions under the Jalandhar Diocese with the bishop as its patron.

A special investigation team that probed the complaint against Mulakkal filed a 2,000-page charge sheet in a lower court in April 2019. The case was later transferred to the Kottayam court, in the southwestern state of Kerala, for trial.

The prelate and his team tried to delay the trial, seeking 17 postponements before the case came to the trial court in Kottayam.

Mulakkal was summoned to appear Nov. 11, 2019, to hear the charges read to him before the trial could begin. The prelate, however, took nine postponements so that the court could not read, or "frame," the charges against him. He has not been in court since Nov. 30, 2019.

Asked whether Mulakkal would appeal the latest dismissal order, his brother-in-law, P.P. Chacko, said they would decide the matter after studying the court's directive. "We have not gotten the order yet," Chacko, who was present in the court March 16, told GSR.

Legal experts say Mulakkal can now appeal to the Kerala High Court. If he is denied, his next step is to the Supreme Court, the top court in the country, based in New Delhi.

If the upper court does not issue a stay, the district court in Kottayam can proceed to trial. 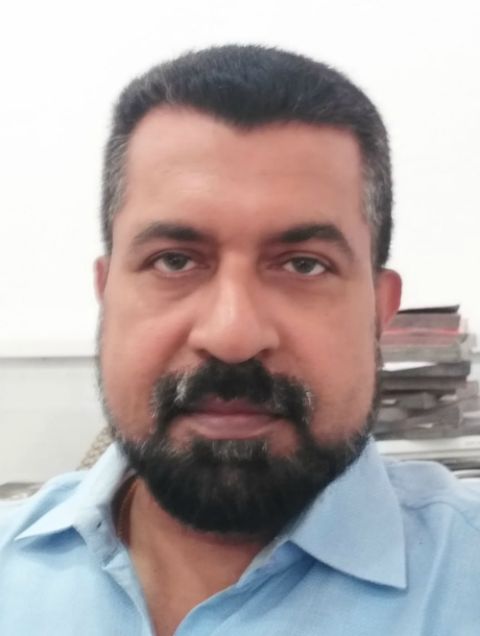 Shaiju Antony, joint convener of Save our Sisters (Provided photo)

Meanwhile, several groups have demanded divesting Mulakkal of his office.

"Bishop Mulakkal should immediately be dismissed in view of the court order that prima facie found the charges against him legally tenable," says Shaiju Antony, the joint convener of Save Our Sisters, a lay movement that had spearheaded a sit-in demonstration against Mulakkal in September 2018.

The public protest drew support of five Missionaries of Jesus nuns and thousands of people from various religions and ideologies. It eventually led to Mulakkal's arrest and imprisonment on September 21, 2018. The Kerala High Court granted him conditional bail on Oct 15, 2018.

"It is a shame for the entire Catholic Church if a bishop stands trial for heinous charges such as rape," Antony told GSR.

Antony also wants the Catholic Bishops' Conference of India to implement its zero-tolerance policy to clergy sex abuse by removing Mulakkal as the Jalandhar bishop, especially after the latest court decision.

At the conference's biennial gathering in February, 192 bishops reaffirmed their commitment to the zero-tolerance policy.

Mulakkal had stepped down as the bishop in September 2018 before he came to Kerala to face police interrogation before his arrest. He returned to Jalandhar after he was granted bail.

Antony and others have urged the bishops' conference to restrain Mulakkal from offering Mass and conducting other religious activities.

Even some Catholics in Punjab want Mulakkal's removal as their leader.

Roshan Joseph, a Catholic lay leader in the Jalandhar Diocese, says local Catholics have welcomed the court's latest order. Joseph also said Mulakkal had told church groups in Jalandhar that the Kottayam court would dismiss the case against him and that he would return as the full-fledged Jalandhar bishop.

Jalandhar Catholics have renewed their demand for a native prelate to replace Mulakkal, who was born in Kerala. Scores of priests and hundreds of nuns from Kerala now serve the Jalandhar Diocese, which now functions under an administrator appointed by Pope Francis the day before the bishop's arrest. 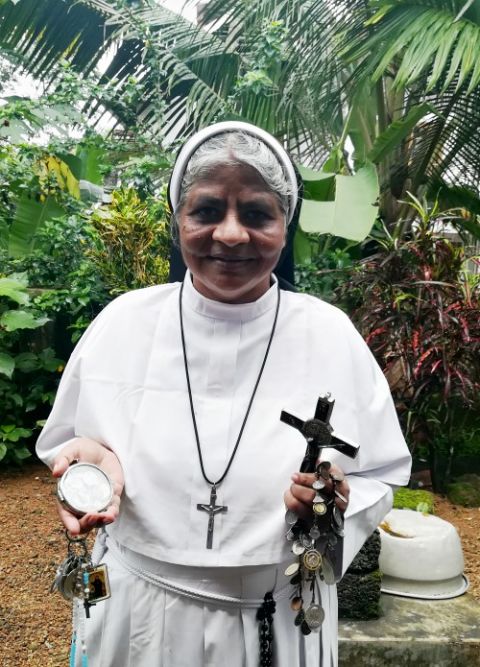 Franciscan Clarist Sr. Lissy Vadakkel, a key witness in the rape case against Bishop Franco Mulakkal, displays lockets of saints, a rosary, religious relics and a crucifix engraved with "Missionaries of Jesus," the congregation of the rape survivor. (Saji Thomas)

Virginia Saldanha, a Catholic theologian who also had sought Mulakkal's dismissal, says the latest court order is "a small but significant victory for the survivor. It shows that our justice system will not bow down to power, and that is very crucial in this case."

Sr. Anupama Kelamangalathuveli, the spokesperson for the survivor and her supporters, says the court order has vindicated their stand. "Until now, the accused and those supporting him, including the Catholic Church leadership in India, have been accusing us of lying. At least now they all should understand the reality," she told GSR over the phone from their convent in Kuravilangad.

She says they want a speedy trial "as any delay can derail justice, as Mulakkal and his team could influence the witnesses."

Another witness from the same congregation came forward Feb. 21 to accuse Mulakkal of sexual misconduct against her but has not made an official complaint.

Kelamangalathuveli says witnesses now lead a difficult life. One of them, Franciscan Clarist Sr. Lissy Vadakkel, says her congregation pressures her to change her testimony and support Mulakkal.

"I have become a fallen star for my congregation and the church hierarchy who back the bishop accused of rape," she told GSR in 2019. "But that does not dampen my spirit. I live in police protection as an outcast or untouchable, not for securing my life, but to live until I record my statement in the court."