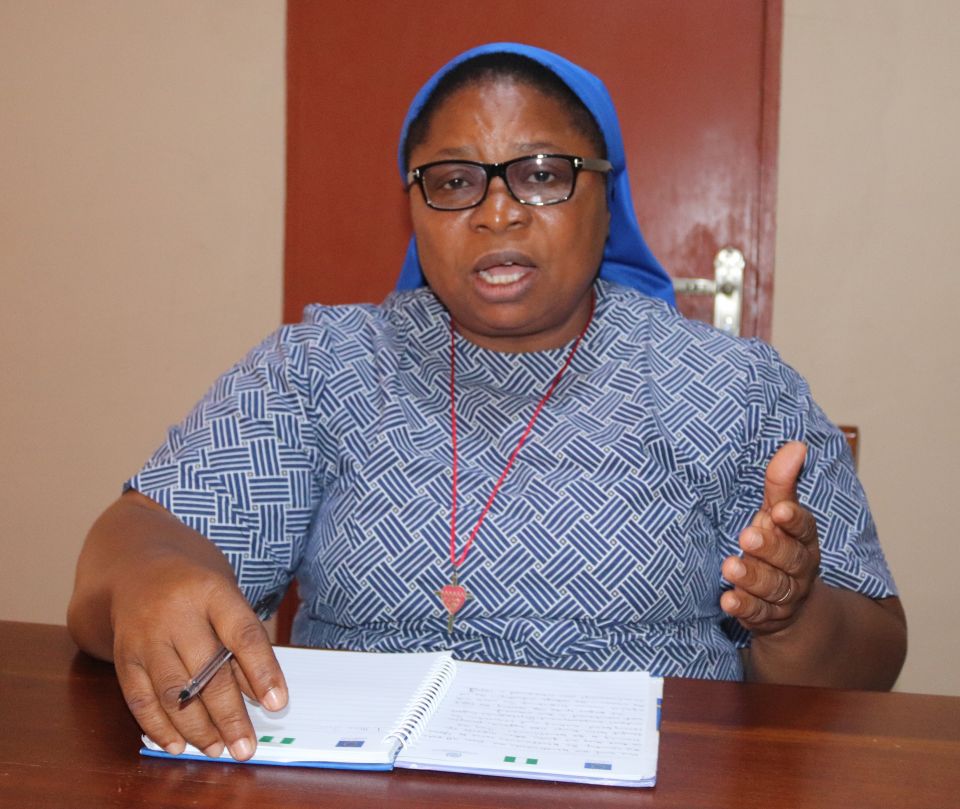 Sr. Florence Nwaonuma of the Sisters of the Sacred Heart of Jesus on Aug. 13 in Benin City, Nigeria. Nwaonuma is a trained social worker, lawyer and member of the Edo Task Force-run Fullness of Life Counseling and Development Initiative, an anti-trafficking organization that focuses on rebuilding the lives of returnees and provides empowerment programs for them to earn a living. (CNS / Valentine Iwenwanne)

Benin City, Nigeria — Fatima Atewe, a single mother, knew it would be hard work, but she was excited to start a new job loading bricks into delivery trucks, earning as much as $27 a day.

But after five months, her interest began to wane. She had only one thing on her mind: quit her job and migrate to Europe.

The appeal of Europe is widespread among young Nigerians, and Atewe, 23, was no different in her thinking. She could not afford a visa or an airline ticket, but she was determined to travel northward against terrible odds that often leave Nigerians at the mercy of the sea.

Atewe's journey reflects that of thousands of young Europe-bound Nigerians. She was trafficked across the Sahara Desert and ended up in Libya for more than a year. In Libya, she was forced into prostitution. But Atewe earned more than $2,400 and was able to repay her "buyer" and secure her freedom.

The Washington-based Africa Faith and Justice Network reported that about 60% to 80% of Nigerians embarking on the journey have been trafficked to Europe for prostitution. About 95% of those trafficked are from Edo state — Atewe's home — which has the highest number of cases of human trafficking in the country.

In Edo, the Sisters of the Sacred Heart of Jesus are working to fight human trafficking and illegal migration by raising awareness, providing counseling to victims and teaching young people skills that can lead them to find meaningful work and discourage them from being enticed to Europe.

"That was what led us into the fight against human trafficking," said Sr. Monica Omowunmi Rowland, the congregation's superior general. "We therefore have chosen to actively engage in the different activities that can help reduce this evil that has eaten deep into our society."

The sisters employ two major approaches in their ministry. They work to raise awareness of the dangers in human trafficking in schools and churches in villages in Edo and help young women gain employable skills so they can stay in their communities.

The Catholic Bishops' Conference of England and Wales supports the effort, purchasing vehicles and other equipment, including audio-visual gear that allows the sisters to show films to educate the entire community about the dangers of trafficking.

"When we go for a campaign in each of the villages, we have a big screen projecting films of some of our people that have been trafficked and are suffering, so it becomes so real to them," Rowland told Catholic News Service.

The sisters operate the Sacred Heart Cottage Industry in Uromi, where young women learn weaving, sewing, bread-baking and soap-making skills so they can be gainfully employed or even open their own business as an alternative to leaving Nigeria.

"We also teach them self-confidence so that when they meet these traffickers, they would be able to resist them," Oda said. "As we build their cognitive domain, we also build their emotional and spiritual lives."

Sr. Florence Nwaonuma is a trained social worker, lawyer and member of the Edo Task Force-run Fullness of Life Counseling and Development Initiative, an anti-trafficking organization that focuses on rebuilding the lives of returnees and provides empowerment programs for them to earn a living.

When Atewe returned to Nigeria, she met Nwaonuma and was received by the Edo Task Force. Atewe is enrolled in a fashion school, where she's receiving tutorials on how to make women's clothing to help rebuild her life. 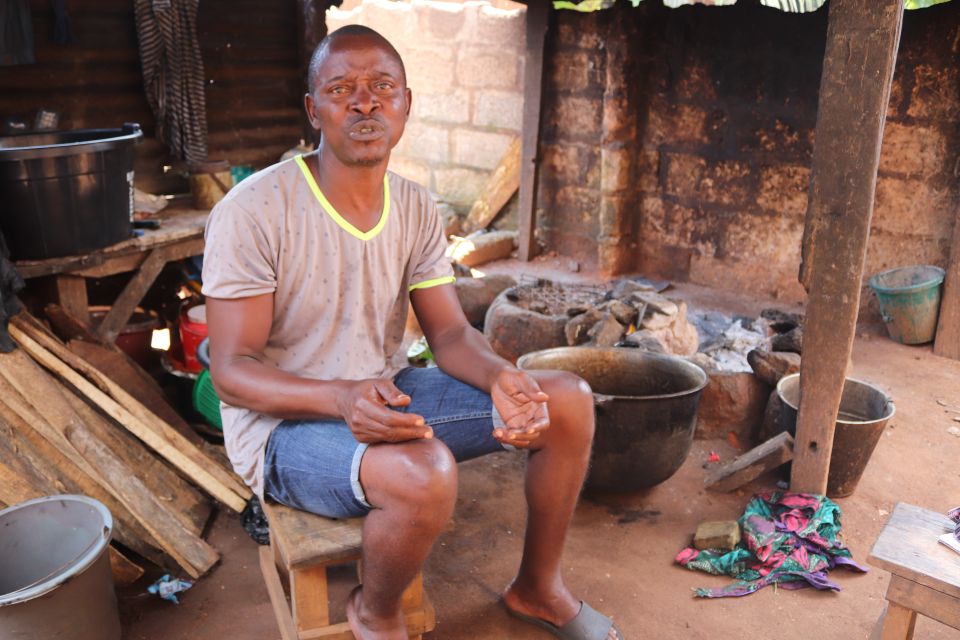 Michael Omoze sits in his kitchen in Benin City, Nigeria, where he and his wife cook meals they sell to meet living expenses. He and his family are beneficiaries of the Edo Task Force-run Fullness of Life Counseling and Development Initiative, an anti-trafficking organization that focuses on rebuilding the lives of returnees and provides empowerment programs for them to earn a living. (CNS / Valentine Iwenwanne)

Michael Omoze and his family also are beneficiaries of the Edo initiative; his family was offered funds to open a restaurant to help them meet living costs with the support from nuns in Switzerland.

Omoze and his family fled their house when his daughter's traffickers showed up in his compound demanding compensation for trafficking his daughter abroad. Omoze became apprehensive and could not continue with his work.

"My daughter's smugglers were threatening us to pay them for taking her abroad, and I didn't have what they were demanding for, so my family and I went into hiding. It was depressing and traumatic ... it made me lose my towing van driving job," he told CNS.

Human trafficking in the US: Sisters' networks and ministries break the cycle one life at a time