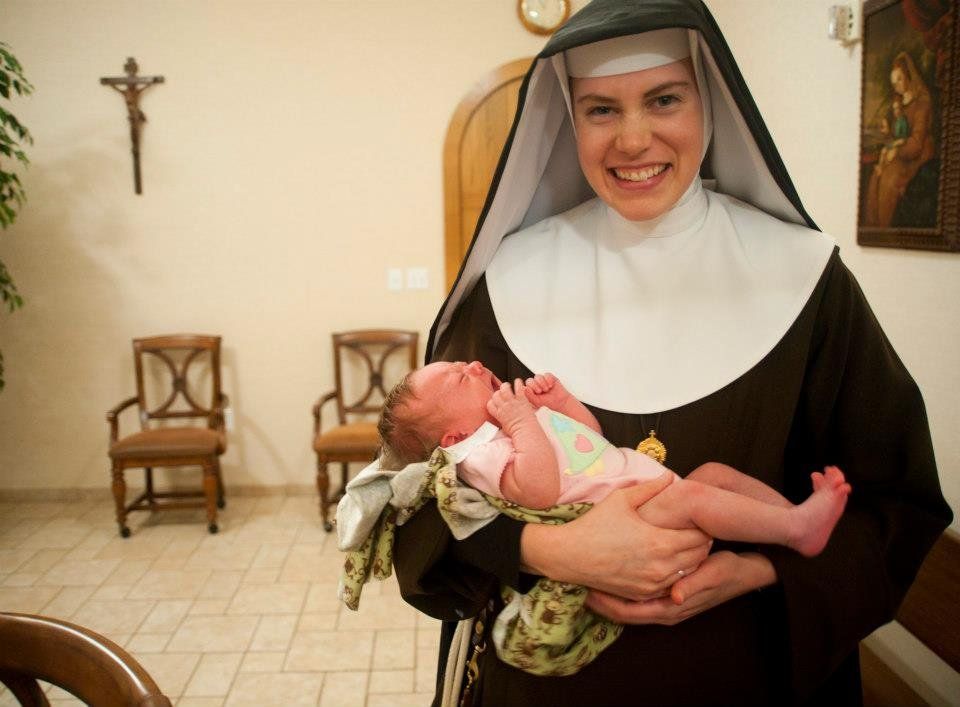 Mother Mary Paschal of the Lamb of God holds her infant niece, Cecelia Potee, in 2011. The Catonsville, Maryland, native was elected abbess of the Our Lady of the Angels Monastery in Alabama on July 29. (CNS/Catholic Review/Courtesy of Amy Donahue, Facebook)

Baltimore — When Theresa Buck was still in high school at Mount de Sales Academy in the Baltimore suburb of Catonsville, she took a standardized assessment test meant to give some indication of the kind of career that would best suit her talents, personality and interests.

Topping the list of potential careers, according to the assessment? Ministry as a woman religious.

An exercise completed more than two decades ago turned out to be more than prescient.

Not only did the former parishioner of St. Agnes Parish in Catonsville enter the Poor Clares of Perpetual Adoration at the Our Lady of the Angels Monastery in rural Alabama, she recently was entrusted with leadership of the internationally known monastery.

Today with the religious name of Mother Mary Paschal of the Lamb of God, she was elected abbess July 29, taking on the same post that was once held by Mother Angelica, founder of both the monastery and the global Catholic communications network known as EWTN.

The Poor Clares of Perpetual Adoration are a contemplative community of cloistered nuns whose charism is centered on adoration of the Blessed Sacrament. Established in France in 1854, the religious community has monasteries that act autonomously.

Betty Buck, Mother Mary Paschal's mother, said the Alabama monastery had to get special permission from Rome to allow her daughter to become the abbess. At 38, she was not quite at the official minimum age requirement of 40 for the leadership position.

Betty and her husband, Phil, parishioners of Our Lady of Perpetual Help in Ellicott City, Maryland, said their family was overwhelmed by the news of their daughter's election.

"We were thrilled because we believe she has an obvious love for the sisters," Betty Buck told the Catholic Review, the news outlet of the Baltimore Archdiocese. "She has a vision of a beautiful way of following the Poor Clare rule. Their way of life is very powerful because it goes along with detachment from the things of the world and a total abandonment to the Lord.

"Once they've done that, they're free to grow closer to the Lord. Their unity and their self-sacrifice is impressive to anyone who would ever see their way of life." 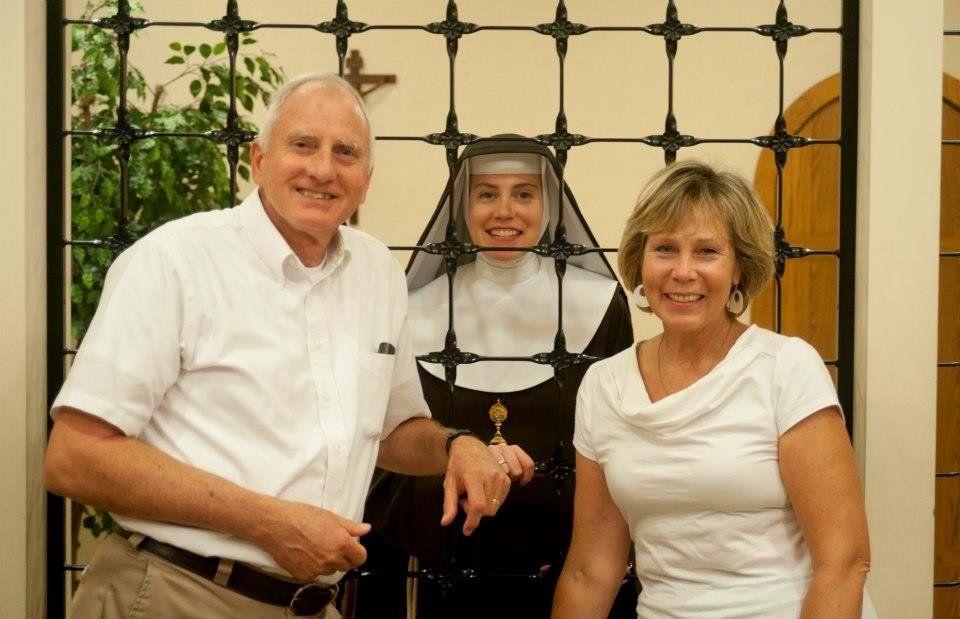 Phil and Betty Buck celebrate their daughter's solemn vow of profession in 2011 as a Poor Clare of Perpetual Adoration in Alabama. Their daughter, Mother Mary Paschal of the Lamb of God, was elected abbess of the Our Lady of the Angels Monastery in Alabama on July 29. (CNS/Catholic Review/Courtesy of Amy Donahue, Facebook)

Each Poor Clare sister has designated times to pray before the Blessed Sacrament. As a cloistered community, the Poor Clares do not venture beyond the confines of their monastery and have limited interactions with the outside world. Betty Buck said her family is permitted to visit Mother Mary Paschal twice a year. A Catholic Review request with the monastery to interview Mother Mary Paschal was not answered.

Betty Buck noted that prior to her daughter's election as abbess, Mother Mary Paschal was ministering as her community's infirmarian, helping with the health needs of the other sisters.

Mother Mary Paschal is the middle child of five sisters. She attended Lamb of God School, a private Christian school in Halethorpe, Maryland, where Phil Buck had been headmaster.

"She always had a love for the Lord," Phil Buck said, "but it wasn't on our radar that she was considering a religious vocation."

Betty Buck said her daughter prayed frequently in the chapel at Mount de Sales Academy and spoke about religious life with the Dominican sisters who staff the school.

While still in college studying biology at what is now Stevenson University, the future nun began visiting a variety of women's religious communities. After visiting the Alabama monastery, she told her mother it "felt like home."

Betty Buck said her daughter entered the Poor Clares before she finished her college degree because she felt such a strong calling. After several years living in the community, she made her solemn profession in 2011.

Betty Buck said she and her husband gave their daughter "Lamb" as her middle name as a way of paying tribute to the Lamb of God. Mother Angelica, who died in 2016, kept "Lamb" as part of Mother Mary Paschal's religious name when she made her first profession.

"We were on pins and needles wondering what name she would get," Betty Buck said with a laugh. "When they called out 'Sister Mary Paschal of the Lamb of God,' I just about screamed."

Monica Potee, one of Mother Mary Paschal's younger sisters, said her sibling has always been "very solid" in doing what is right. Potee believes she will make a good leader.

"She's always been very prayerful," said Potee, a parishioner of the National Shrine of St. Alphonsus Liguori in Baltimore.

Phil and Betty Buck noted that their daughter is a humble person who doesn't seek the spotlight as she begins serving as abbess to a community of approximately 14 sisters.

"All she wants is to love the Lord and live the life of a Poor Clare," Betty Buck said. 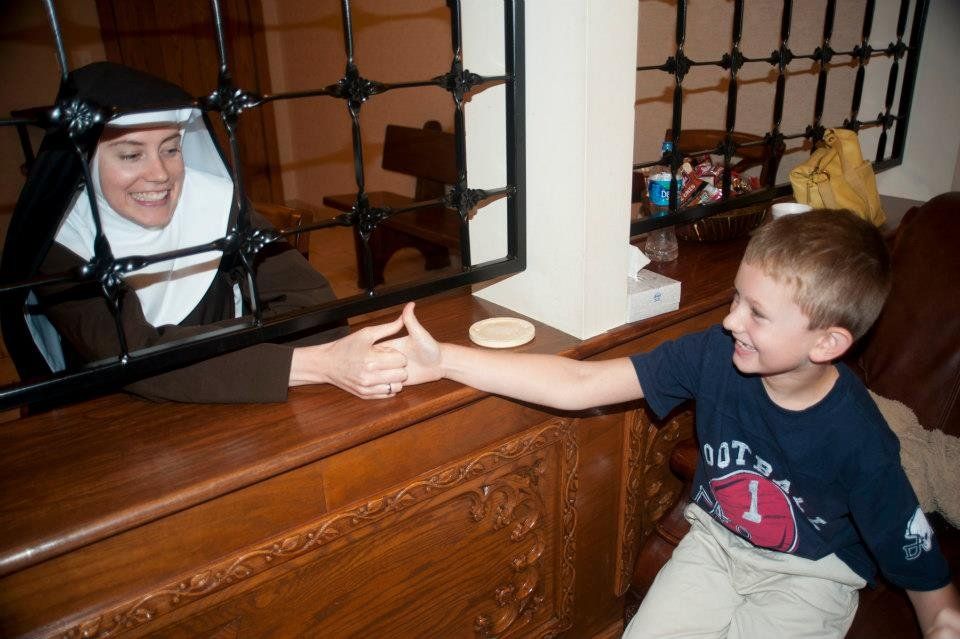 Mother Mary Paschal of the Lamb of God thumb-wrestles with her nephew, James Donahue, in 2011. The Catonsville, Maryland, native was elected abbess of the Our Lady of the Angels Monastery in Alabama on July 29. (CNS/Catholic Review/Courtesy of Amy Donahue, Facebook)

Renewing the conversation between faith and science