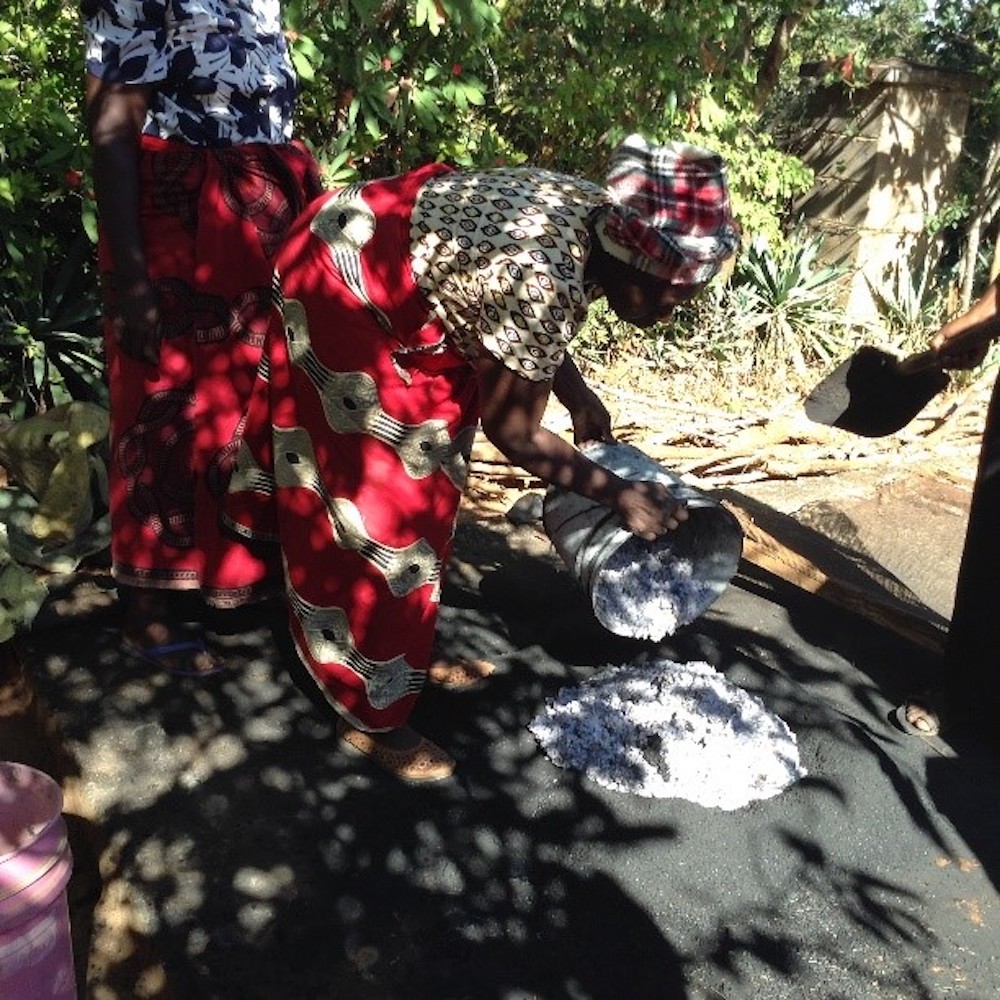 A woman in Chikuni, Zambia, adds paper paste to the corn cob ash. The mixture will be formed into balls and dried into a burnable fuel alternative to charcoal from trees. (Provided photo)

She wakes up at the earliest sign of dawn and braces herself for a long walk in the forest in search of firewood. Each week, the journey leads her further away from her home because the area that was once a thicket is fast losing all the trees in sight because of charcoal burning, which is the main source of energy for most households. Once she gathers whatever pieces of wood she can lay her hands on, she makes her way back to the village. She often feels afraid that she will step on a snake or meet dangerous people who can easily take advantage of a defenseless woman who is all alone in the forest.

On returning home, she has hardly thrown down her pile of firewood before she is already on her second trip of the day, this time in search of water for household chores.

The above scenario is a description of the average woman living in rural Zambia, including in Chikuni Mission in the diocese of Monze, where I — a member of the Religious Sisters of the Holy Spirit, a local congregation of sisters — work as a teacher educator in the teacher training college in the area.

Zambia is a largely undeveloped country, and many people are either peasant farmers or are engaged in small-scale business enterprises to sustain their living. The national electricity grid is mainly connected to homes and industries in towns, leaving many rural peasants with no choice but to burn charcoal as a source of energy. The high cost of electricity, as well as unexplained and prolonged power outages, force even many townspeople to prefer charcoal as a form of energy. This makes the sale of charcoal a lucrative business.

While it is a well-known fact that cutting trees is harmful for the environment, the practice is rampant in Zambia because alternative sources of energy for home consumption have generally gone unexplored. Continued tree cutting has taken its toll on the climatic pattern of the country. Droughts are now a common occurrence and have led to hunger and a deepened sense of poverty among the people.

As one solution to the practice of tree-cutting, a women's group in the Chikuni area is trying to curb the practice by using recycled paper as an alternative energy source. The women collect used paper and cardboard boxes to make a special kind of charcoal which they use instead of the traditional charcoal made from grown trees.

The women learned the art of making the charcoal from Holy Spirit Sr. Edna Himoonde, a former human capacity officer at the diocesan development office in Monze. When she moved to Chikuni in January 2019, Sister Edna formed the women's group and has been its coordinator ever since. With the help of officers from the Ministry of Community Development, she has run a number of workshops on topics ranging like money-saving and activities to generate income, to empower the women and help them live independent and fulfilling lives. All the members of this women's group are either widows or single mothers, and their ages range between 30 and 65.

After collecting the paper, the women shred it into very small pieces and then soak it in water for over a week to make a thick paste. Later, corn stalks and bare corn cobs are burnt to make ash, which is added to the thick mixture of paper and water. When the mixture is thoroughly stirred, the pulp is scooped into small balls that are left to dry in the sun. Once the balls are dry enough, they can then be used as an alternative to the traditional charcoal.

This alternative form of charcoal is helping the women access a source of energy that helps to lessen the risk of having an unpleasant encounter with snakes or wild dogs lurking in the tall grass as the women go out early in the morning in search of firewood.

The use of recycled paper has also helped to improve cleanliness and to reduce littering in the community, since every piece of paper is put to good use. Previously, uncollected heaps of paper posed a danger to health especially in the rainy season; heaps of garbage are a good breeding ground for diseases such as cholera, which has become a yearly feature in most crowded cities in Zambia.

I have interacted with the Chikuni women's group and shared the things I learned in the course I took on Catholic social teaching and sustainable development, from the Loyola Institute for Ministry, in New Orleans (in the U.S). With my newly acquired knowledge and skills, I facilitated a workshop on care for the environment and emphasized the need to preserve trees as part of the initiative to care for our common home.

I saw the knowledge I acquired from the course being actualized in a very concrete way. The women asked questions and interacted with each other in a way that was fascinating to watch. Instead of sharing about family problems or economic struggles as they normally did, the workshop material engaged them to a point where they realized that caring for the environment was their responsibility. This experience of conducting the workshop made me feel the need to continue sharing this important information with other groups of people, including my students.

After taking the workshop, the women each planted a tree as a commitment that they would be ambassadors of caring for the environment. The smiles on their faces said it all! The tree planting exercise was not only an act of rejuvenating the environment but — as one of the women said — "We are giving a new lease of life to our children and their unborn children because trees are a source of hope for the Earth."

Since most of these women are unable to read and write, the act of planting the trees was their way of reading Pope Francis' "Laudato Si', on Care for Our Common Home." I went to bed that night feeling a sense of satisfaction that even if I cannot save the entire world, at least I can help to preserve the trees in this little corner of the Earth where God has placed me.

As long as electricity is so expensive and alternative sources of energy are not adequately explored, trees will continue to be cut for charcoal. This deforestation will be brought under control only if we explore and invest in cheaper and common sources of energy like the alternative charcoal made by the Chikuni Women's Group. It is therefore important that such innovative ideas are supported and explored on a wider scale in order to preserve the trees for posterity.

[Charity Bbalo is a Religious Sister of the Holy Spirit. With an academic background in education, English and religious studies, she received a master's degree in multicultural and international education at Oslo University College, Norway. Presently she works in the Department of Literacy and Language Education as a senior lecturer at Charles Lwanga College of Education, a Jesuit-run training college for primary school teachers in Monze Diocese, Zambia.]