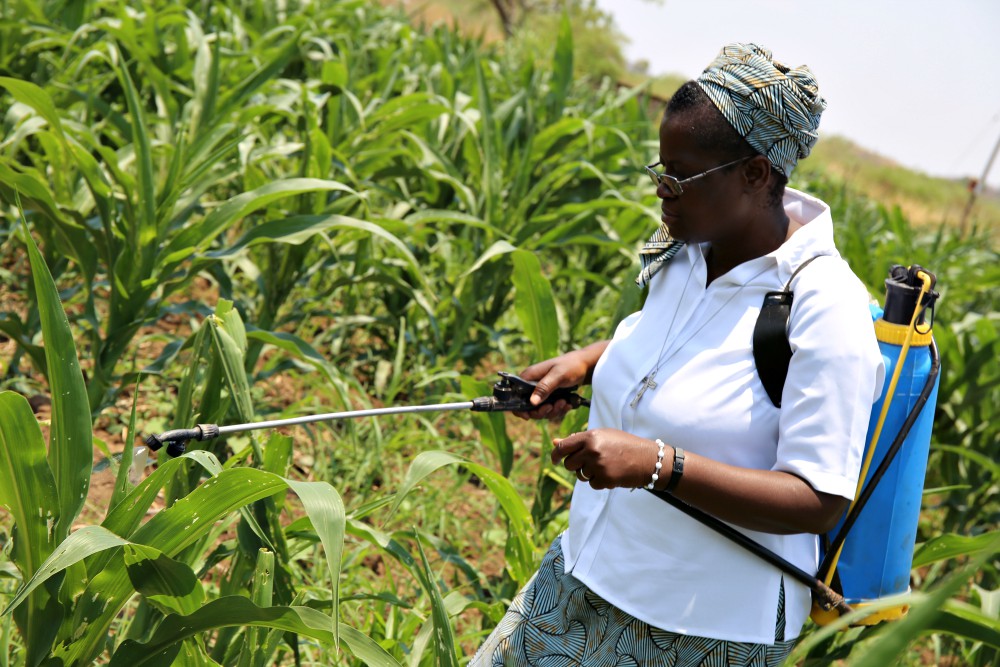 Sr. Christine Singini sprays organic pesticide on maize crops of the Daughters of the Redeemer's organic farm outside Chilanga town in Zambia. The sisters make organic pesticides to fight common pests, such as cutworms and aphids. (GSR photo/Doreen Ajiambo)

Under the scorching sun on the outskirts of this town located 15 miles south of the capital, Lusaka, a group of religious sisters has slowly been practicing organic farming amid a biting drought that has affected millions of residents and their livestock countrywide.

The Daughters of the Redeemer are determined to find solutions to severe drought that has affected the southern African nation over the past few years, resulting in crops failing and livestock losing their grazing grounds.

All surplus produce is used to feed hundreds of children under the age of 7 who attend early childhood education in the school run by the sisters. They also distribute food to hungry and vulnerable families and sell the remaining produce to consumers at local markets.

"We now have a solution to the drought problem in this country," said Sr. Christine Singini, noting that the practice provides protection from the global food crisis. "We used to rely on food donations during the dry season to feed hundreds of children attending school and neighboring families."

The landlocked country with a population of nearly 18 million is facing one of its first droughts in decades caused by dwindling rainfall, and an estimated 2.3 million people are on the brink of starvation, according to the U.N. Office for the Coordination of Humanitarian Affairs.

The majority of people in Zambia are farmers who depend on subsistence and small-scale agriculture for their food security and incomes. In recent years, these farmers have seen food prices rise due to the effects of climate change and poor harvests, making it even more difficult for them to feed their families.

Driving through the rough terrain in rural villages of southern and western parts of the country, one cannot fail to notice the effects of drought. Crops have withered as women and girls throng the road carrying plastic jerry cans in search of water. Hungry children with anemic eyes and swollen bellies sleep helplessly on the floors inside their huts. The animals lie prone, exhausted and starving. Bees swarm around a flower as they suckle its last drops of nectar.

However, it is not just Zambia.

More than 45 million people in southern Africa are facing severe food shortage following successive years of drought and flooding. Botswana, Zimbabwe, Lesotho, Angola, Malawi and Namibia are facing the consequences of drought, according to the United Nations World Food Program.

"WFP is fighting big and complex humanitarian battles on several fronts at the start of 2020," said David Beasley, executive director of the program. "In some countries, we are seeing conflict and instability combine with climate extremes to force people from their homes, farms and places of work. In others, climate shocks are occurring alongside economic collapse and leaving millions on the brink of destitution and hunger."

The Daughters of the Redeemer sisters do not rely on rainfall to farm due to shifting weather patterns. After drilling a borehole, they installed an irrigation system that has given their crops a lifeline. Even with temperatures soaring to nearly 38 degrees Celsius, 100 Fahrenheit, the lush green healthy crop of maize and vegetables stands firm. 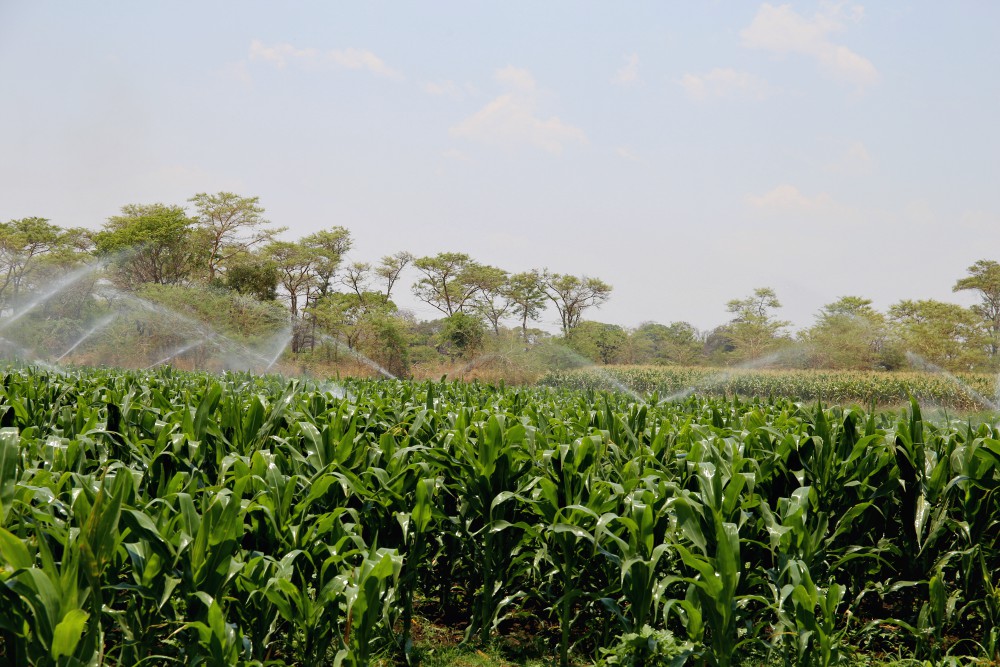 Water sprays over a maize farm on the outskirts of Chilanga town in Zambia. The Daughters of the Redeemer do not rely on rainfall to farm. They have installed a drip irrigation system, which they credit for their success. (GSR photo/Doreen Ajiambo)

"We do not rely on rainfall to farm," said Singini, who oversees the operations of the farm, which began in 2017. Most farmers here are not able to grow crops when the rain doesn't fall as expected. "For us here, we are able to plant and harvest crops all year round because we use irrigation to water our crops and get better yield."

Since synthetic fertilizers have long-term negative effects on the environment, sisters have switched to organic fertilizers that are safer and cause no pollution.

During the Green Revolution, a period in the second half of the 20th century when the productivity of global agriculture increased drastically as a result of new advances, many farmers moved away from traditional farming methods and turned to chemical fertilizers, hybrid seeds, herbicides and pesticides, all of which promised increased yields and enhanced productivity.

While this system, also known as conventional farming, does deliver high production levels, it also pollutes air and water bodies, contributes to climate change and depletes soil fertility. The practice, experts said, has led to serious health problems of obesity and diet-related disease. It has also contributed to a range of respiratory conditions, causing suffocation and even death in severe cases.

"Food safety is important as we strive to achieve food security," said Dr. Peter Mokaya, an independent public health consultant and executive director of Organic Consumers Alliance, an advocacy group for organic agriculture. "The use of chemical fertilizers to improve farm yields continues to degrade our lands and in some cases is leading to a situation where lands are affected by advanced degradation, posing a danger to the food we eat."

Singini said organic farming was critical to achieving food security in Zambia and other African countries. On their farm, they keep cows, goats and chickens that provide manure that they use for planting their vegetables and maize. 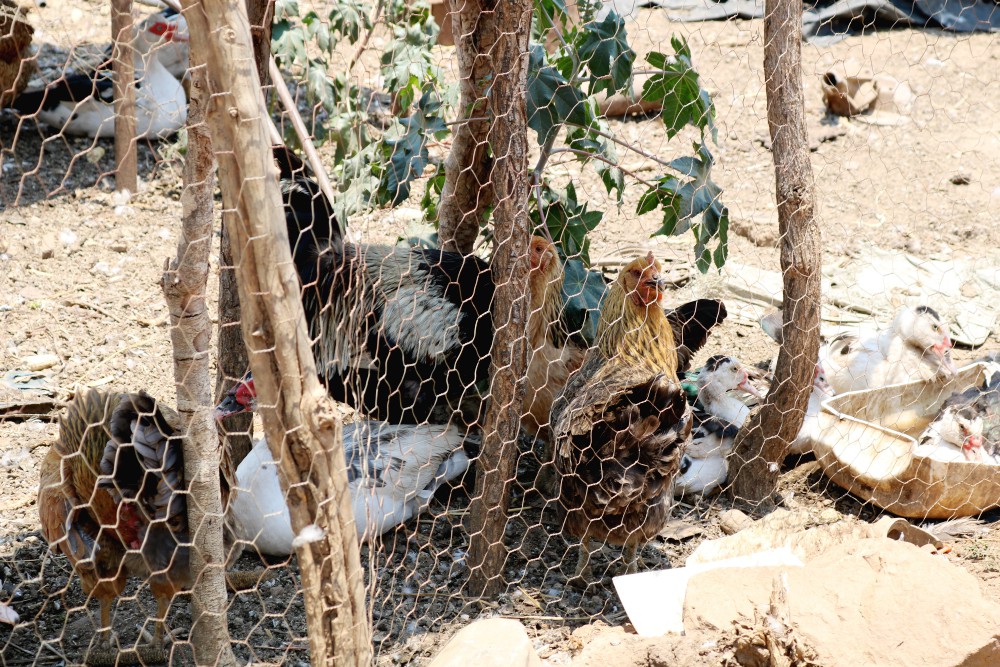 Chickens on an organic farm run by the Daughters of the Redeemer outside Chilanga, Zambia (GSR photo/Doreen Ajiambo)

On managing pesticides, Singini said they practice crop rotation, growing different crops on the same land in an orderly sequence. This helps growers control buildup of soil-borne pests and diseases, she said. They also plant a mixture of crops in and around the farm in an attempt to boost the number of natural insect enemies on the farm.

For spraying their crops, they either use organic pesticides made from naturally occurring substances or self-made mixtures using organic chemical compounds. Both options are safe for organic farming.

The sisters have been popularizing organic farming to achieve food security and to meet the U.N. sustainable development goals. Organic agriculture has a positive impact on no less than eight of the 17 goals, including Zero Hunger (No. 2), Good Health and Well-being (No. 3), Clean Water and Sanitation (No. 6), Decent Work and Economic Growth (No. 8), Responsible Consumption and Production (No. 12), Climate Action (No. 13), Life Below Water (No. 14) and Life on Land (No. 15).

"I really love taking care of the environment and human health. This is the reason I practice organic farming because it's sustainable and safe," said Singini, adding that they have also slowed down deforestation by planting more trees in the region. "This kind of farming ensures that soils remain nutrient and can produce crops for many years to come in order to cater to the generations."

For the last two years, sisters have been working to help families fight hunger through organic farming in a country where poverty levels have remained high, with over half of the population living below the international poverty line, according to a recent report by the World Bank. 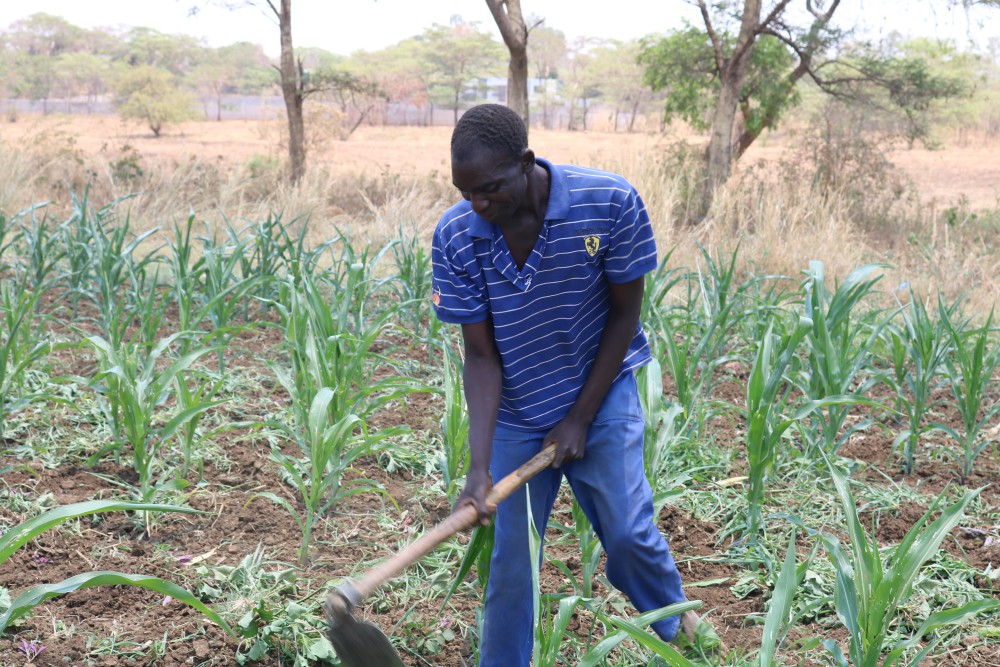 A man works on his small farm on the outskirts of Chilanga town in Zambia. The Daughters of the Redeemer sisters have been training local farmers in organic farming. (GSR photo/Doreen Ajiambo)

Before the country confirmed its first two COVID-19 cases on March 18, sisters were conducting training in organic farming in villages with an aim to fend off the use of synthetic chemicals. Zambia has so far confirmed almost 1,900 cases of coronavirus with 42 related deaths, prompting a slowdown in the sisters' training efforts due to social distancing requirements.

Normally, the training focuses on diversified production of vegetables, maize, fruits and beans for local markets. The plan is also geared toward teaching farmers how to use agricultural skills and business knowledge to promote new markets of organically raised produce in the country, they said.

Despite the coronavirus scare, the sisters and villagers continue to practice organic farming.

The sisters' approach to farming has proven increasingly popular across several villages in Chilanga. The move has allowed families to support themselves during climate change. 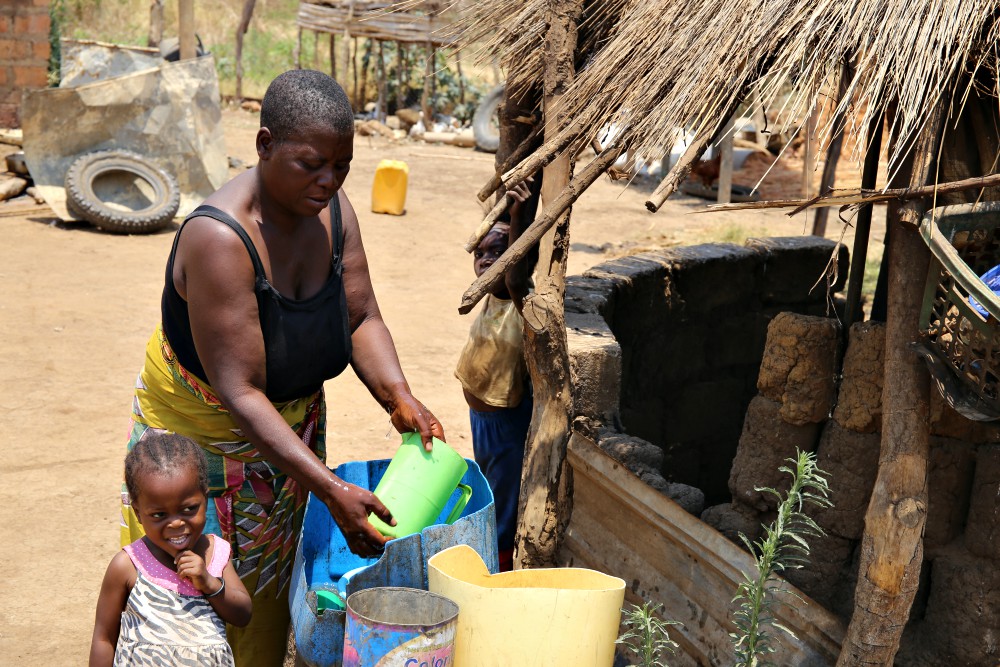 Jane Muma, 39, and two of her children work outside their rural home in the outskirts of Chilanga town in Zambia. She is among families who have been trained by sisters in organic farming. (GSR photo/Doreen Ajiambo)

Jane Muma, one of the farmers who has received training, said she has been able to farm, feed her family and conquer malnutrition.

"We are happy to have sisters in our community," said Muma, 39, a mother of four. "My husband and I work in the farm to make a living and our children are now able to go to school healthy because of organic farming."

In the meantime, sisters are working with the government to manage increasing rates of malnutrition by helping it provide medical care and treatments, such as dietary changes, improving nutritional intake and addressing underlying medical conditions, in remote villages where hunger and poverty have been reported.

"We are also treating malnutrition and educating families about health and balanced diets," said Singini. "We are telling them to practice organic farming as it's the only way to feed children healthy food." 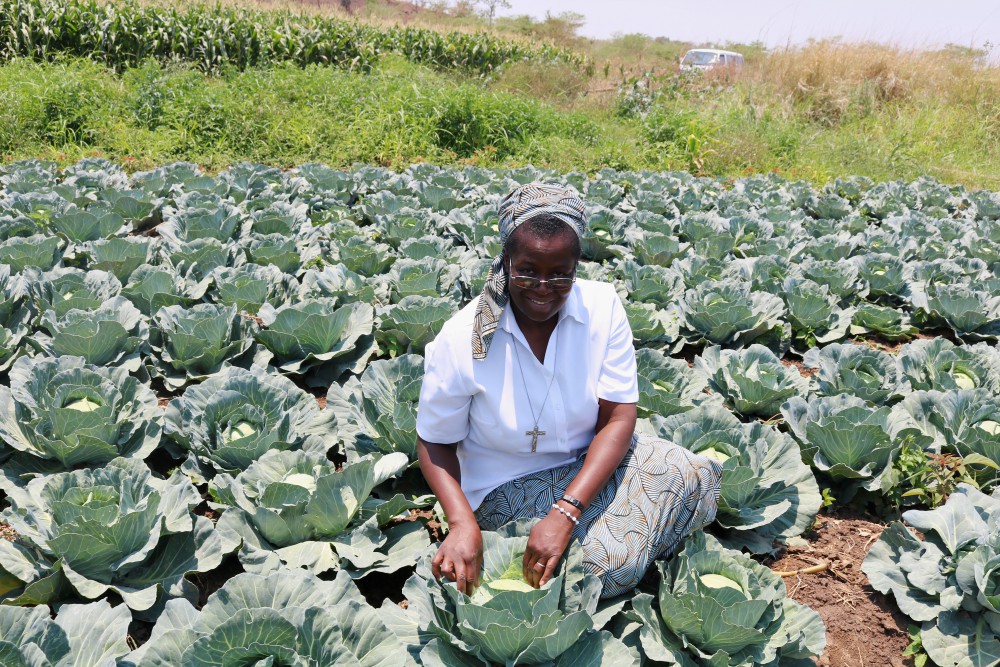 Sr. Christine Singini bends to harvest cabbage on the Daughters of the Redeemer sisters' organic farm on the outskirts of Chilanga town in Zambia. (GSR photo/Doreen Ajiambo)

Read this next: Preserving trees by making charcoal from paper litter