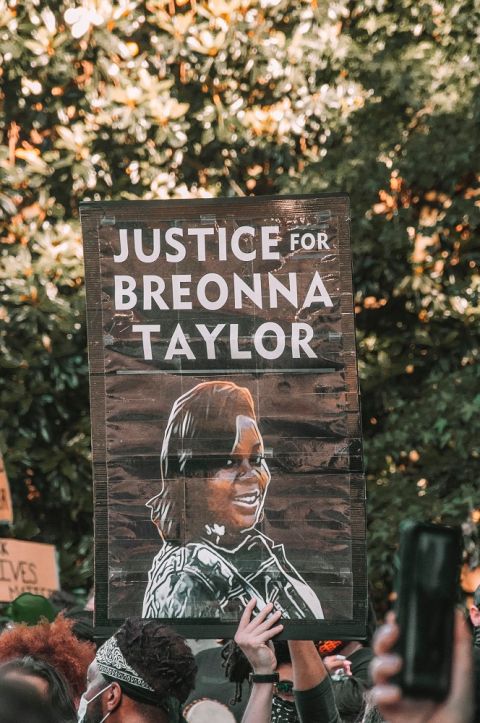 A protester holds up a sign calling for justice for Breonna Taylor at a Black Lives Matter protest in Atlanta. (Photo by Maria Oswalt on Unsplash)

"Say her name!" I yelled, and the crowds roared back: "Breonna Taylor!"

After days of protests of the death of George Floyd around the country, I had a gnawing feeling inside that yet again, a Black woman had been relegated to the bottom of the pile in the fight for social justice. So I was excited when my friend Sister Mary Therese, a Sister of the Presentation of the Blessed Virgin Mary, found a protest dedicated solely to agitating for justice for Breonna Taylor, the young Black woman shot and killed by Louisville, Kentucky, police officers who entered her apartment with a no-knock warrant while she slept.

The organizer, Ashabi Owagboriaye, a young Nigerian American woman, was intentional about creating space for Black women at the rally in Chicago. She invited us to walk in front, to lead the chants and, eventually, to address the protestors. My boldness grew with every call out to "say her name." I realized this was not only a catharsis for me; the rallying cry had turned into a prayer of lament.

So far in 2020, we have witnessed the pain of the world as the pandemic has taken the lives of dear ones and watched as our society also ensured that many are unable to access their basic needs. We've seen that capitalism does not benefit people of color; it relies on their exploited labor to shore up white privilege. Thus, my prayers have consisted of a litany of "whys."

This year, with its many universal and personal challenges, I have found myself returning to my Protestant roots, where praying out loud is my go-to form, and I have frequently engaged in lamentation. Lament is also a part of Indigenous culture; it unites communities in sharing and supporting each other through grief.

In his book Born from Lament: The Theology and Politics of Hope in Africa, Emmanuel Katongole suggests that lament and hope go hand in hand. When Black women — myself included — called out "say her name" at the protest, it was a personal and collective lament that as Black women we are sidelined, forgotten or sacrificed for some "more pressing" social concern. Our identity is erased when our numerous contributions are not mentioned in the telling and retelling of history, be it in the church, in science, or even in the struggle for civil and human rights. 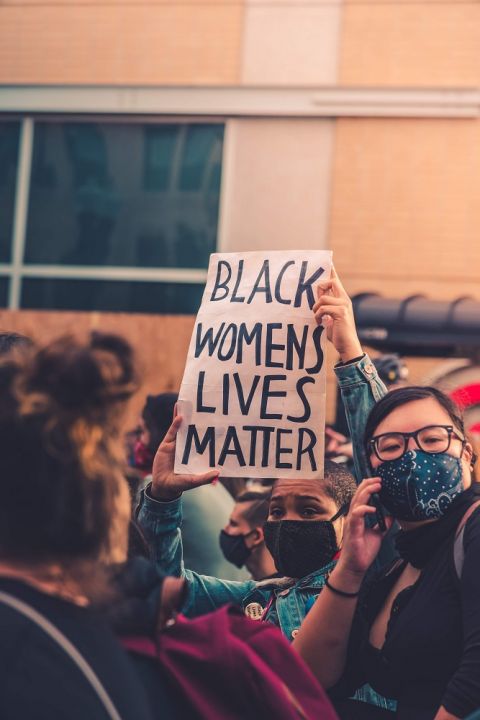 A protester holds up a sign at a protest in Chicago. (Photo by Max Bender on Unsplash)

The cry of lament to "say her name" is not limited to Breonna Taylor or Eleanor Bumpurs or Alberta Spruill or Aiyana Stanley-Jones or any of the many Black women, trans or cisgender, who have died from police brutality or while in police custody. We are lamenting every Black woman, past and present, who has been forgotten, sidelined and/or erased.

What we as Black women are asking and demanding from you is to recognize us first as imago Dei, made in the image and likeness of God and thus equal to every other human being and deserving dignity and equality. I am also demanding from the church an acknowledgement that Black women have been sidelined, abused and ignored from the time of colonialism and slavery to the present, when our representation in leadership roles at parish, diocesan and even at the Vatican is minimal to nonexistent.

The church should also answer why its doors continue to remain closed to our LGBTQ sisters and why the church hesitates to join us in proclaiming that #BlackLivesMatter and #BlackWomenLivesMatter.

I am asking that religious congregations take a long, hard look at their history and complicity in perpetuating racism in their work with communities of color and to critically interrogate the absence of Black women and women of color in their ranks. I am demanding that we move from a place of tokenism to a place of egalitarianism. I want our work to be acknowledged and compensated fairly instead of appropriated. I want our individuality and identity to be recognized and celebrated instead of obscured and erased.

Listen with me to the roaring response of the crowd, where both hope and yearning were expressed. Know that while we continue to lament the injustices we have endured for centuries, we hope that a new day is finally dawning for Black women, a day when our assertiveness and passion will no longer be dismissed as aggression and anger.

We will no longer be disingenuously praised as resilient and strong, which in turn allows society to continue to subjugate and ignore us. Our culture, our beauty, our creativity shall finally be celebrated, and you will know our names. You will know our names and those of our Black female ancestors whose contributions to the world have long been ignored.

[Sr. Mumbi Kigutha, a member of the Sisters of the Precious Blood - Ohio, was born and raised in Kenya. Currently, she is based in Chicago, Illinois, as a part-time international consultant for the reconciliation and social cohesion department of the Jesuit Refugee Services.]

We are called to embody the Spirit of Pentecost