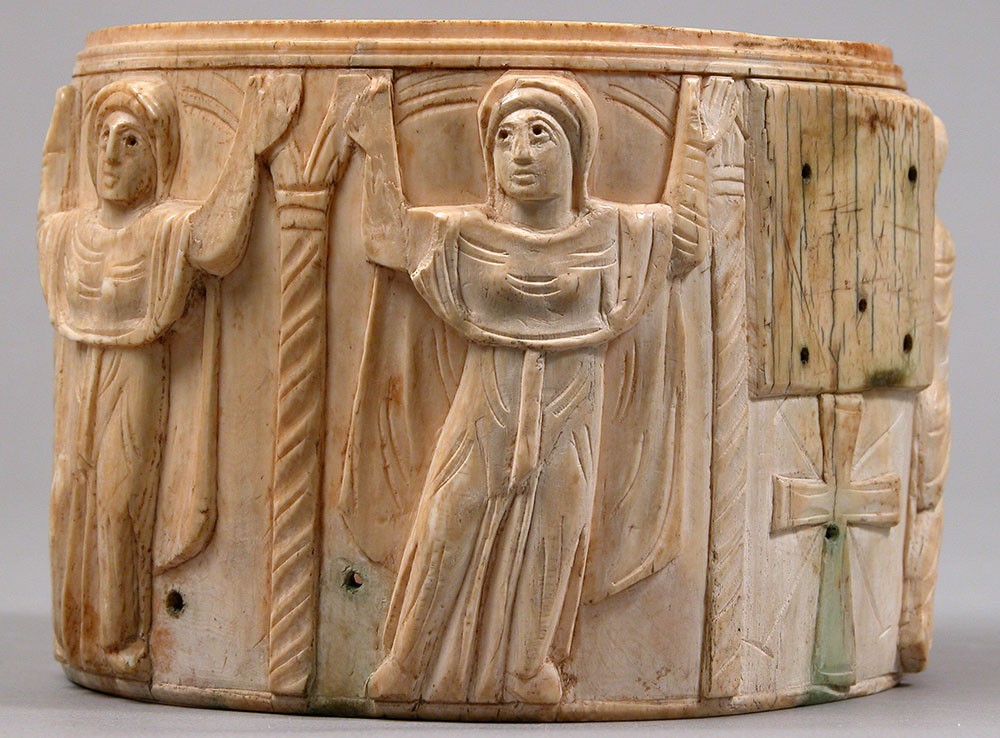 A sixth-century Byzantine pyx in ivory depicts the women at Christ's tomb. (Metropolitan Museum of Art)

Editor's note: This column is part one of a two-part series on Jesus as a feminist. Read Part 2.

The recently promulgated apostolic constitution Praedicate Evangelium has come as a pleasant surprise to many, especially regarding leadership positions in various dicasteries of the Roman Curia now being opened to baptized men and women in all vocations and categories. This inspires me to share my reflections on the scriptural basis for ministries involving all the baptized.

I firmly believe that the early church was a feminist movement, although its mission was not limited to feminism.

In the Gospel of Luke, both Martha and Mary (10:38-42) are Jesus' followers and love him in their own ways. Martha, to me, represents the "relatively conservative" section of the early church, which expects women to take up traditional roles in serving the Lord and is disturbed by his progressive views. Mary, her sister, represents the feminist church as envisioned by Jesus.

Or perhaps both represent the church at different points on the wide spectrum of feminism. Some scholars portray Martha as an important leader who has not received due attention. Using different senses of interpreting Scripture, such as literal or allegorical, the Fathers of the Church have varied reflections on this passage. In earlier commentaries, such as Origen's, the two sisters represent the old versus the new law, or Judaism versus Christianity. Commentators are not unanimous in their views.

Jesus comes to bring abundant life to all (John 10:10) and wants both men and women to be liberated from patriarchy. This can happen when victims are freed from domination, and when oppressors are converted and liberated from sin. However, the disciples in the early church come from varied backgrounds, have different occupations, and relate with each other in different ways. Not all of them are comfortable with women serving as leaders.

As a result, "herstory" is mostly unwritten, distorted or erased by men from Scripture as well as tradition. 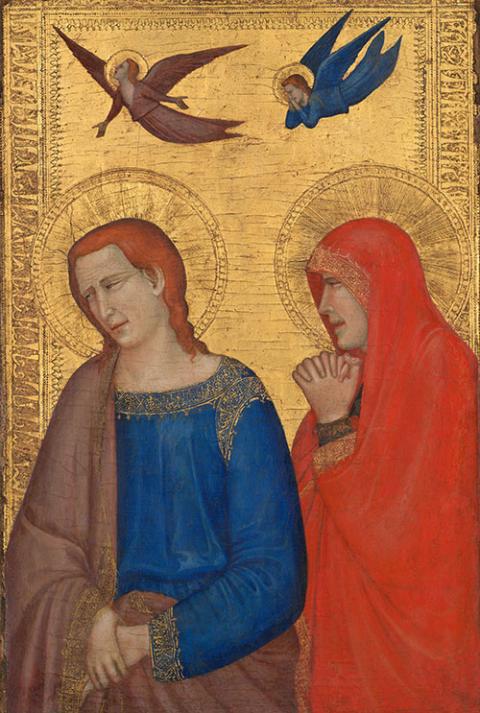 Sts. John the Evangelist and Mary Magdalene, in a painting by a Neapolitan follower of Giotto, circa 1335–45 (Metropolitan Museum of Art)

Take the example of Mary Magdalene, the Apostle to the Apostles. There is a lot of literature, both fact and fiction, on her life. Researchers debate a theory that she is the beloved disciple and founder of the Johannine community.

The more scholars study her personality, the more they realize that her real image is disfigured and obliterated. Over the centuries, she is confused with various other personalities like Mary of Bethany (Luke 10:38-42), the sinner woman who anoints Jesus (Luke 7:36-50), and others.

I think, over the millennia, men have been suppressing women by gossiping about them and projecting their greatest strengths as their greatest weaknesses. On the other hand, Mary, the mother of Jesus, although supposedly not enjoying a good reputation according to some scholars, is later depicted as a symbol of purity due to her immaculate conception and the virginal birth of Jesus. She is given the title "Mother of God."

Is this because of differences in the two Marys' personalities, ideologies, and relationships with Jesus?

Mary Magdalene has a very important role in following Jesus, but she is excluded from the Twelve Apostles while Paul boldly calls himself an apostle to the Gentiles (Romans 1:1; 11:13) even though he is not a disciple of Jesus before his death and resurrection.

Paul collaborates with several women and praises them (Romans 16; Philippians 4:2-3; 1 Corinthians 16:19). He and John Chrysostom mention an apostle named Junia. The feminine identity of this individual is supported in linguistic studies. Nevertheless, biblical scholars are ambiguous whether Paul is feminist or against women's equality in the church (Galatians 3:28; Colossians 3:18; 1 Corinthians 11:2-10).

As I explore this topic, I'm intrigued with the ambiguities regarding roles played by women in the Bible. Similarly, scholars appointed by Pope Francis are unable to reach a consensus regarding the role of women deacons in the early church.

I think "the seven" mentioned in the Acts of the Apostles (6:1-6) should, logically, include women because of the purpose of the service itself. Several wealthy women already support the ministry with their own resources (Matthew 27:55; Luke 8:1-3) and offer their homes as house churches (Philemon 2; 1 Corinthians 16:19; Acts 16:15; Colossians 4:15). These women leaders are certainly very influential. So why should their funds go into the hands of male leadership to then be given to poor widows?

It is a universal fact that widows experience trauma due to gossip, and suspicions are raised when they interact with men, especially in conservative societies. The pastors would have wanted to avoid this. Wouldn't it be practical for the daily distribution of food to take place from women to women (1 Timothy 5:11-16)?

Or is it because, like the male apostles, women leaders realize their own priorities and wish to delegate the ministry? Or because the Hebrew-speaking Jewish women among them tend to neglect the Greek-speaking Jewish widows, and these attitudes undermine women's potential, thereby triggering the counter-choice of male leaders (1 Corinthians 11:17-34)?

From another perspective, seven "men" or andras in the Greek language (Acts 6:3) could indicate men as well as women. Even the Nicene Creed from A.D. 325 uses the words "who for us men, and for our salvation" to represent all the baptized. Accurate historical details regarding the identity of "the seven" are unavailable. They aren't called deacons. Although their ministry is originally created by the apostles to save time and dedicate themselves to the ministry of the Word, Stephen gives speeches (Acts 6:10, 13-14) and Philip is called an evangelist (Acts 21:8). Women deacons are mentioned in other parts of the Bible, though (Romans 16:1).

The names of "the seven" in the New Testament could refer to the families to which they belong. In several cultures (including mine, which probably has Jewish ancestry according to genetic studies), when referring to an individual or family in a public gathering (like it happened when the multitude was asked to select "the seven"), only the name of the head by which the family is known is mentioned. For example, "A son has been born to Naomi" (Ruth 4:17). The 12 tribes of Israel are represented by men but include all other men, women and children (Joshua 4:4; Ezekiel 48:1-7). This could also be to show fairness in the selection or distribution of opportunities and duties to every tribe.

The head of the family receives the blessing by proxy for its members. In my opinion, some of the seven names could indirectly refer to their daughters (Acts 21:8-9), sisters, mothers or other relatives. They could even refer to couples or all the members of their families being selected for the service.

Various ministries in the church today could be understood from this perspective. Whenever pastoral leaders are chosen and blessed, consecrated or ordained, they receive special grace on behalf of others in their ecclesial circles. They are called to animate the entire community to actively participate in the mission entrusted to it.

To conclude, the early church surely had women serving through significant leadership roles in collaboration with the male disciples because it was intended by Jesus to be egalitarian and liberative, but gradually its feminist thrust was watered down. More on this another time!

Read this next: Jesus is feminist