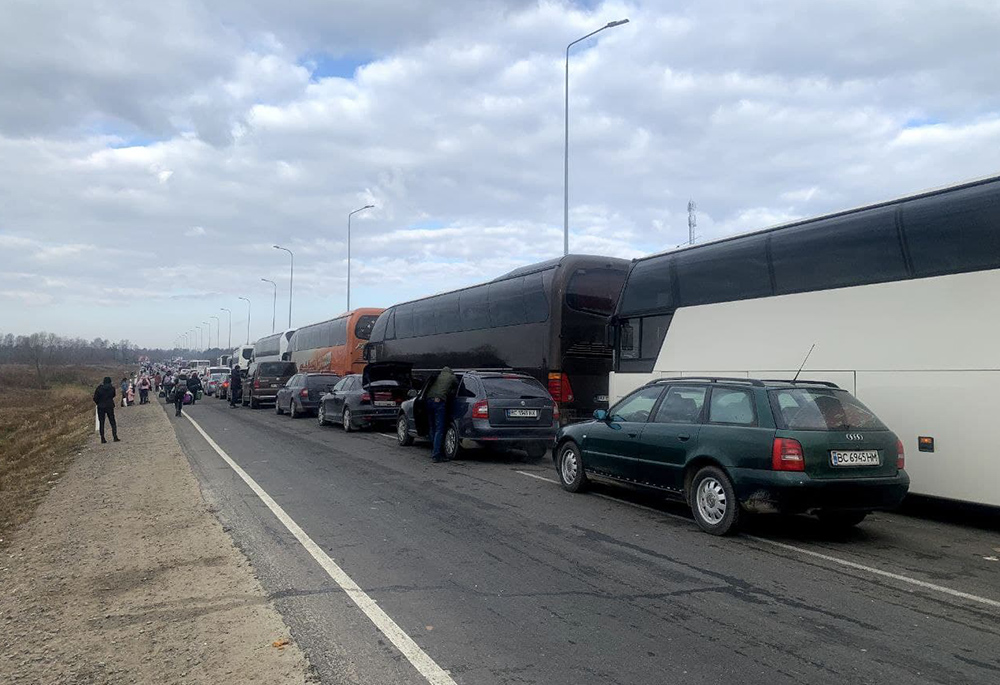 Cars are lined up at the border as people try to leave Ukraine. (Courtesy of Yeremiya Steblyna) 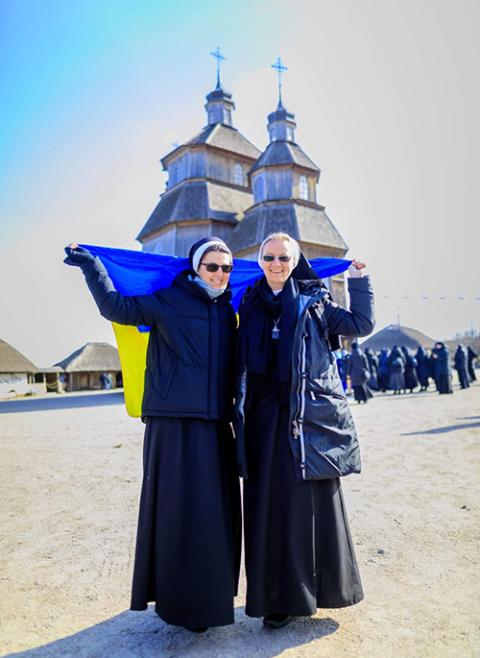 Basilian Srs. Yeremiya Steblyna, right, and Khryzanta Burmei proudly carry the Ukrainian flag at the monastic pilgrimage on the island of Khortytsia, in Zaporizhzhia. The pilgrimage finished just before the Russian invasion of Ukraine. (Courtesy of Yeremiya Steblyna)

On Wednesday, Feb. 23, I went back into our monastery in the city of Zaporizhzhia, in eastern Ukraine, and with great relief thanked God that our monastic pilgrimage to Zaporizhzhia was done. After two days of prayers, conversations and meetings, all the monks and nuns had left safely for home. They had a long way to go: Some went by train or bus to the west (more than 1,000 kilometers), and some went north to the capital of Kyiv. In silence and fatigue, I closed my eyes and exhaled, thanking God that we had completed this pilgrimage.

I have been working in the Ukrainian Greek Catholic Church Monastic Commission for seven months now. I was the co-organizer of the pilgrimage and responsible for welcoming the participants when they arrived. A few days before it began, we learned that there was a chance that the pilgrimage would not happen at all, as American and other intelligence sources claimed that Russia would inevitably attack Ukraine. About 20 participants refused to travel to eastern Ukraine because of the danger of military confrontation.

Zaporizhzhia is a city 250 kilometers from the demarcation line of Russia, where hostilities with the Russian occupiers have been taking place for eight years. Our Ukrainian Greek (Byzantine) Catholic Church in areas like this is a missionary church, because for decades the Soviet government destroyed not only people here, but also their faith, language and culture.

Therefore, the monks and nuns — with their prayers and presence — were able to support this region and all the religious in it, show solidarity with the faithful, support social projects of the monasteries, and ask God for the development of the church and growth of vocations for communities of consecrated life in eastern and southern Ukraine. 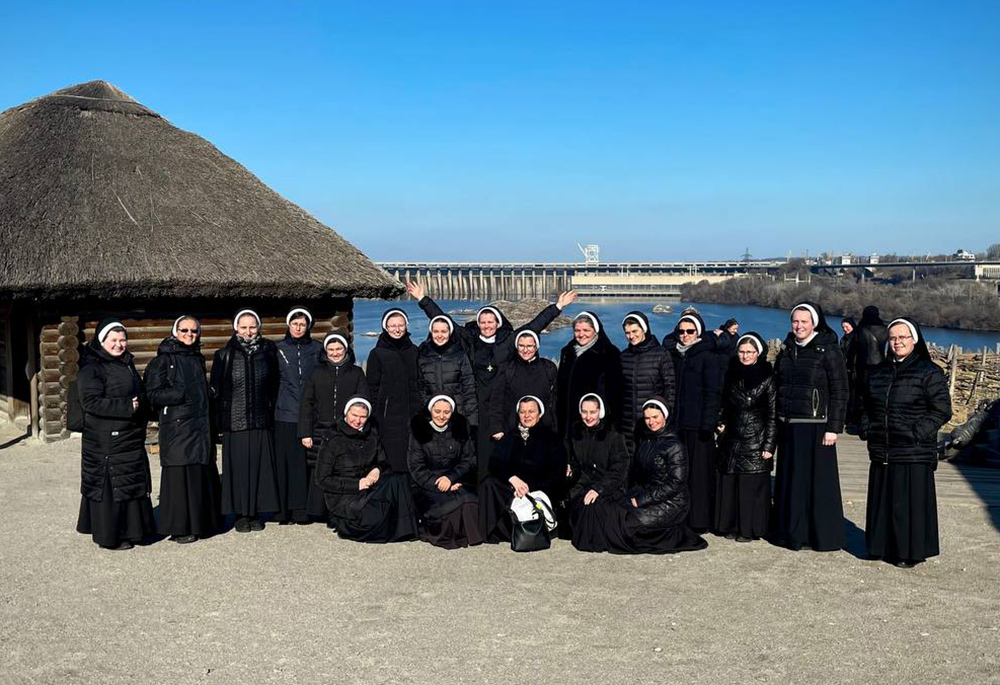 Basilian sisters on the monastic pilgrimage are pictured on the island of Khortytsia, with the Dnipro or Dnieper River behind them. The pilgrimage finished just before Russia invaded Ukraine. (Courtesy of Yeremiya Steblyna)

The next day, Thursday, Feb. 24, I woke up at 5 a.m. and saw reports that explosions had been heard in many cities of Ukraine, and everyone claimed that Putin had started the war in Ukraine. But Zaporizhzhia still slept surprisingly calm and peaceful. At 6 a.m. we prayed the Divine Liturgy, the bishop blessed us and we left as soon as possible for western Ukraine, to Lviv, where I live. At that time there was at least a crumb of peace but great fear of a Russian tank.

Even though Zaporizhzhia was calm, there were noticeable alarm raids on the road. The war constantly reminded me that it exists. People started leaving for western Ukraine or the border in the morning, refueling their cars on the way. We also needed to refuel, and when we were in line, I counted more than 50 cars in front of us. It was like that at almost at every gas station. 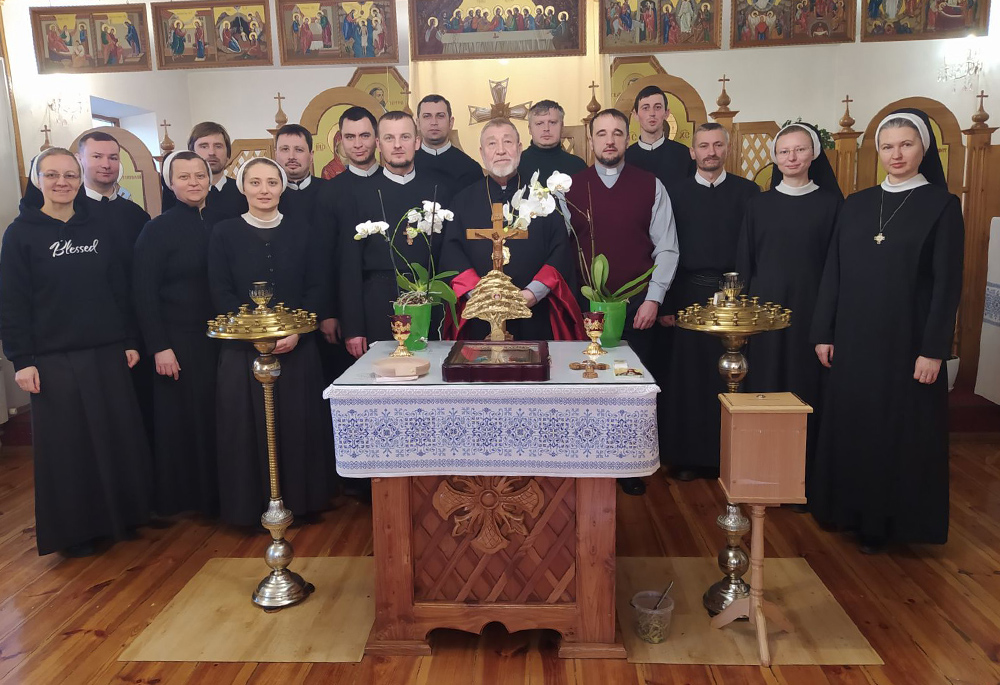 Sisters in Zaporizhzhia prayed the Divine Liturgy before their trip back to Lviv Feb. 24, the first day of the war. (Courtesy of Yeremiya Steblyna)

I noticed that people were fleeing with small children, babies and old grandparents, as well as dogs and cats. I watched how patiently their waited for their turn, with anxiety and in silence. Looking into their eyes, I saw pain and tears. How could this be happening in the heart of 21st century Europe?

There were lines of cars all the way to Lviv. Everyone was fleeing the war. In the evening the traffic jam became even greater and the flow of cars was continuous.

In the center of Ukraine, roads were closed due to the morning explosions and we had to go around villages or fields. It was scary, because the place was unknown to us. There was a sudden smell of smoke in the car — something was burning. About two or three kilometers away in the fields we saw some explosions: A red light appeared and disappeared. And at that moment I sensed the smell of war.

I was afraid of being trapped, and our car seemed to be dragging on very slowly — and the minutes passed just as slowly. At the same time, I was constantly providing moral support for another sister on the phone, who after a pilgrimage had gone to Kyiv and found herself at the epicenter of the war. It was important for me to hear from her every half hour and to know that she was fine.

After 17 hours on the road, we got to my friend's house and spent the night. Our sister in Kyiv spent two days and two nights in the basement, hiding from the bombs. Under the bullets, she left the capital to return to western Ukraine.

As I am writing this in the early days of March, here in Lviv, everything still seems calm. From time to time there is an air raid alarm, and my sisters and I go down to the basement. We continue in prayer and trust in God that not a hair will fall from our head without his permission (Luke 21:18).

We are fighting on another front — prayer. In addition, the sisters volunteer, distribute humanitarian aid, play with refugee children in boarding schools, weave camouflage nets, receive and care for refugees, and everyone does everything in their power. I believe that we stand on the side of the Light and the Light is behind us too. I believe that the Light is already overcoming darkness, even if the price of victory is pain, sacrifice, tears, suffering and death.

We are waiting for the Resurrection. Ukraine is anxiously awaiting its victorious dawn, for it is promised to us by the word of God: "God is in the midst of us, he will not be moved, God will help him before the dawn" (Psalm 46:6).

Sisters and monks sing a church hymn, "Prayer for Ukraine," on the banks of the Dnipro River in Zaporizhia, in eastern Ukraine. (YouTube/Zhyve.tv)