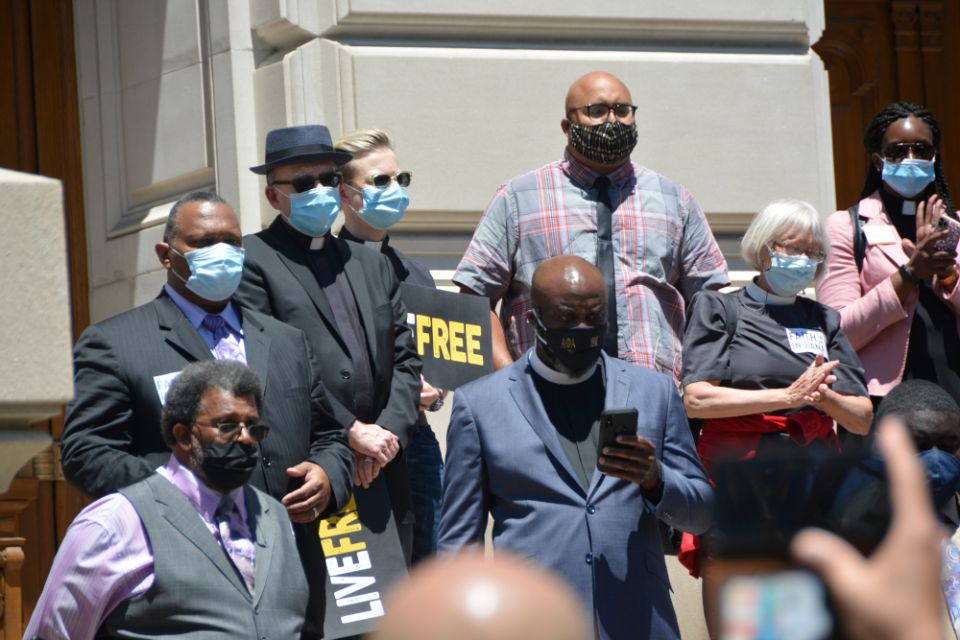 Faith leaders and congregants of many religious traditions gather on the steps of the Indiana Statehouse in Indianapolis May 31, 2020, for a peaceful protest organized by Faith in Indiana, in response to the May 25 death of George Floyd -- an unarmed black man said to have spent several minutes under a Minnesota police officer's knee before becoming unconscious. (CNS/The Criterion/Natalie Hoefer )

Indianapolis — Sister Gail Trippett sees a ray of hope amid all the darkness that once again descended upon Indianapolis and other cities across the country following the death of George Floyd.

Yet before she shares that hope, the parish life coordinator of Holy Angels and St. Rita parishes in Indianapolis poses a question that she believes everyone must consider: "Do we really believe what we have been taught, that God's presence is in every human being?"

Trippett, a Sister of St. Joseph of Carondelet, said that If people believe that teaching, then they must see that what happened to Floyd, a 46-year-old black man who died May 25 in Minneapolis while in police custody, also happened to God. Floyd died after a white police officer kept his knee on Floyd's neck for almost nine minutes despite his pleas that he could not breathe.

"Are we willing to fight to restore the reverence and honor that God deserves as he is present in humanity?" Trippett  asked. "To me, that's the fundamental question."

It's a question being asked among parishioners throughout Indianapolis.

Catholics told The Criterion, newspaper of the Archdiocese of Indianapolis, that Floyd's death and the subsequent protests highlight the need for fundamental change in society to ease and eventually eradicate social ills such as poverty, lack of access to jobs and health care, and mistreatment of minorities by police.

While they found hope in the peaceful protests because of the diverse nature of the crowds involved, they still fear that the change they seek, the change rooted in Catholic social teaching, is a long way off.

Charles Guynn, 72, has been around life and law enforcement long enough to know certain realities about being a black person, being a police officer and being in confrontational situations.

Guynn, a member of St. Rita Parish, once trained police officers on improving race relations. "Officers are human beings," he said, explaining that an officer who holds racist views or is wont to act heavy-handedly toward someone in custody may not easily give up such tendencies when they put on a uniform.

"The knee on the neck, (the police officer in Minneapolis) wasn't trained to do that. He brought that with him. The reaction is that people are tired of hearing and seeing law enforcement overkill in situations," Guynn said.

Guynn views racism in today's world as more subtle and complicated than in the past. He recalled years ago when pews in Catholic churches were roped off specifically for black parishioners and blacks had to wait for whites to receive holy Communion first.

As someone who met with the Rev. Martin Luther King Jr. and other civil rights leaders in the 1960s, Guynn said it takes special training to combat racism through nonviolence.

"It's training, a lot of training. He (Rev. King) was opposed to any kind of violence like burning and throwing things at the police. It doesn't solve anything. They burn down a grocery but don't care about the end effect, now you don't have a grocery in your neighborhood," he said.

Others in the archdiocese have reason to hope that change eventually will come.

For 23 years, Tim Nation has led the Peace Learning Center in Indianapolis, working to build peace through programs for schools, groups and businesses.

For the past year, Nation also has been a member of the Race and Culture Committee at St. Thomas Aquinas Parish in Indianapolis, trying to help fellow parishioners understand racial inequities and how the Catholic faith can help address them.

"The average black person in Indianapolis is two to six times more likely to be suspended or expelled from school, to live in poverty, to be arrested or the victim of a police-action shooting," he said. "We wanted to help our parishioners learn about these injustices and help our community and country become more racially just."

Nation said he felt a "profound sadness" as he watched the peaceful protests in Indianapolis May 29-30 dissolve into the violence and looting that occurred on those two nights, leading to two deaths, including Chris Beaty, a 2000 graduate of Cathedral High School in Indianapolis.

Although he credited the actions of Indiana Gov. Eric Holcomb and Indianapolis Mayor Joseph Hogsett for their response to quell the violence, he said much work remains to effect true social change.

"For change to happen, it will need to be in policies and laws, changes in law enforcement. So much of the frustration is around economics — living wages, ability to put food on the table. That's been exasperated by COVID-19 and high unemployment. Things have gotten worse for a lot of people of color."

Marvin Johnson, the first black child to graduate from the former St. Andrew the Apostle School in Indianapolis, also called for wholesale change.

Now 71, Johnson, president of St. Andrew the Apostle Church's parish council, said he wishes he could say there has been a dramatic change in the country involving race relations since his 1963 graduation, but he can't. For Johnson, Floyd's death and the aftermath of violence in the country seem like pages from his childhood.

"The same attitudes have been with us in society for so long," he said. "It's frustrating when you see the incidents that are happening today because of police brutality and injustices in the justice system. Nothing really changes in terms of attitudes or solutions."

Johnson said he believes that if change ever comes regarding race it will be through "structural changes in society" that will have to be built on the foundation of the Christian principles that have been so much a part of his Catholic education and faith.

"I would really hope that people would recognize that every person has value," he said.

"We have people of faith at every level of government, every level of business, every income level, every side of town. We have a lot of people in influential positions who could make change, but they are afraid to represent their Christianity. When we get to the conference room or the planning sessions, very seldom are the decisions based on Christian principles.