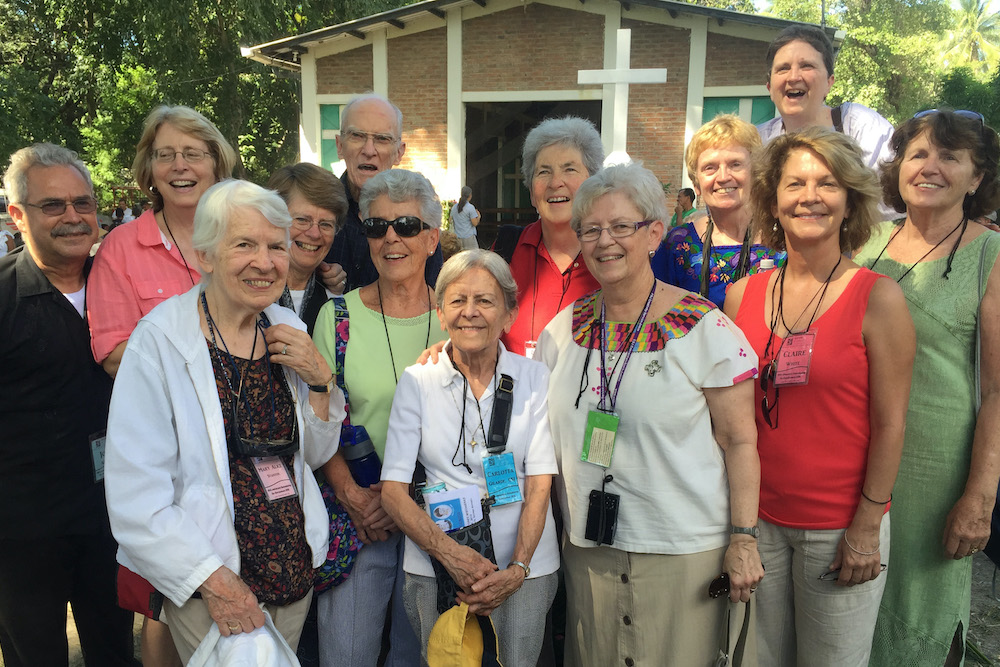 The Boston group poses together in El Salvador on their Share Foundation trip in 2015 for the 35th anniversary of the brutal murder of Maryknoll Srs. Maura Clarke and Ita Ford, Ursuline Sr. Dorothy Kazel and lay missioner Jean Donovan. (Provided photo)

Walking in the footsteps of these courageous women continues to be an experience of transformation and a call to do and be more. Along with six other Boston Sisters of St. Joseph and associates, I was part of the 2015 delegation to commemorate the 35th anniversary of the brutal murder of Maura, Ita, Dorothy and Jean (Maryknoll Srs. Maura Clarke and Ita Ford, Ursuline Sr. Dorothy Kazel and lay missioner Jean Donovan). At the "Monument to Memory and Truth" in Cuscatlán Park in downtown San Salvador, I stood with Maura Clarke's nephew, Michael Clarke, to find her name among the thousands of ordinary martyrs. At the site of martyrdom, we stood under the tree where their bodies were discovered, as the tree was declared a historical site by the El Salvadoran Ministry of External Relations — ensuring that their memory will remain alive for future generations.

During our time in El Salvador, we visited the village of Nueva Esperanza ("new hope"). Here, as in other places we visited, it was evident that the "elders" of the community were committed to keeping the memory of these churchwomen alive for their children and their children's children. Empowerment of women and men, young and old, for the good of all, is part of the fabric of their life.

It was here that I met Sr. Elena Jaramillo, a Sister of St. Joseph of Orange, California. She had been in El Salvador for 30 years. Her quiet, very ordinary, yet profound, manner of accompaniment caused me to imagine what the North American churchwomen martyrs would be doing today had they not been assassinated. As I think of this village and others we visited, I reflect on the presence of Maura, Ita, Dorothy, Jean and their presence in Chalatenango. I was inspired by Elena's presence in Nueva Esperanza 35 years later. Elena and the martyrs we commemorate this week remind me of our early Sisters of St. Joseph who served the destitute in pockets of presence throughout France.

On our last morning, I met Elena again. She asked me, "Why were you afraid to come?" When told her I wasn't afraid, she dug deeper and asked, "Why weren't you afraid?" I told her about my many trips to Ecuador and Mexico to live among, and learn from, the people. I mentioned how the U.S. media can spin a situation to engender fear or downplay it — whichever they want. Elena's parting message to me was, "If you're not afraid, go back and tell others. Tell them not to live in fear." Her words touched the core of who we are called to be as Sisters of St. Joseph — "to move always toward profound love of God and neighbor without distinction — from whom we do not separate ourselves" (from the Consensus Statement of the Sisters of St. Joseph). 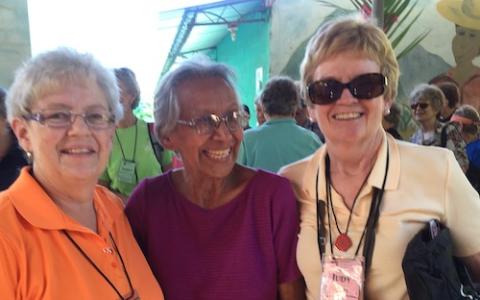 I recall the day their martyrdom hit the news. During the next few months, I found some source of pride in realizing that Ambassador Robert White, who refused to cover up cover up the Salvadoran military's responsibility for these murders, was from the greater Boston area. Little did I imagine that years later, I would come to know his daughter, Claire White, who carries on his passion for restorative justice and reparations in the El Salvador and Honduras.

Claire was part of our 2015 delegation to El Salvador. When she introduced herself as Ambassador White's daughter, the room erupted in applause and my memories of news coverage came flooding back, as well as the recollection of years spent teaching Catholic social justice and using "Roses in December" as part of the curriculum.

There were more than 100 members in our delegation and as the week unfolded Claire seemed to gravitate toward the Congregation of St. Joseph sisters from Boston. In preparing this reflection, I asked her about that. She commented: "These days were probably the most moving and emotional of my life. In connecting with sisters and associates from Boston, I felt my worlds converging. My Boston Catholic upbringing fused with Latin American liberation theology, and my life of activism on behalf of justice came together. You became spiritual soulmates. It also channeled something in me that empowered me to use my voice to promote justice, condemn dictators, and commit to action on behalf of the people of Central America who continue to face unimaginable hardships."

Claire continued: "Being part of the 2015 delegation gave me the courage to talk about the suffering of our own family because of my father's choice to serve in El Salvador. A New York Times retro report brought him tremendous solace, especially because he was testifying in the trials against the masterminds of these heinous murders. He lived long enough to be vindicated, and in death he was celebrated on the Senate floor for his courage by Sen. Patrick Leahy."

Dec. 2 has certainly become a "holy day" for me and many sisters throughout the country. Since 2000, the Sisters of St. Joseph of Boston have sent representatives to the Share Foundation delegations with the Leadership Conference of Women Religious. During those years, close to 20 sisters and associates from Boston have participated. In reading Eileen Markey's book, A Radical Faith: The Assassination of Sister Maura, I see myself in her story of the experience of the shift in religious life since Vatican II. In Boston, we have also offered a prayer service to commemorate the lives of these women on or near Dec. 2. This year's prayer will be streamed to our sisters, associates and agrégées.

[Joanne Gallagher is a Sister of St. Joseph of Boston who has coordinated many immersion retreats to Mexico and Ecuador with students and adults as well as several CSSJ Heritage Pilgrimages. She has served as communications director for her congregation since 2001 and currently serves on the board of directors for the Corporation for the Sponsored Ministries of the Sisters of St. Joseph of Boston, is a trustee of Fontbonne, The Early College of Boston and serves on the board of the Communicators for Women Religious. She was part of the 2015 Share Foundation delegation with the Leadership Conference of Women Religious to El Salvador.]