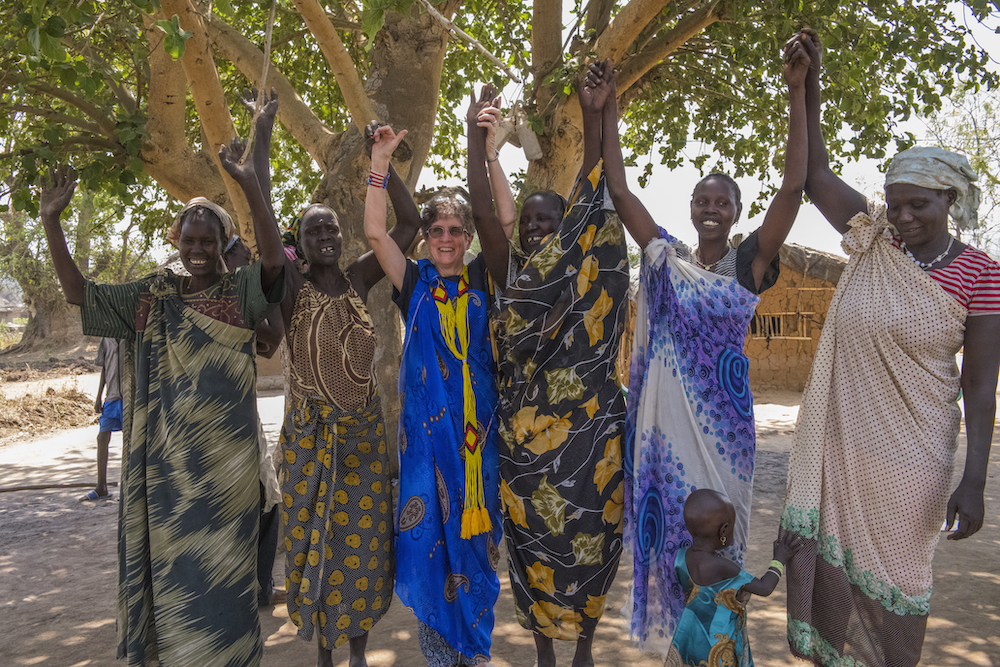 Sr. Marilyn Lacey, third from left, raises her hands with South Sudanese refugee women in celebration of the micro-loans provided by Mercy Beyond Borders. They had just draped Sister Marilyn in blue and put a bracelet on her wrist when they spontaneously grabbed her arms and began singing. (Courtesy of Mercy Beyond Borders/Alison Wright)

Every Eucharist includes time for an offering of gifts. Here in the U.S., that's almost always the moment to contribute money. I've experienced other cultures where it can include contributing fresh produce from one's farm or home-baked goods to share.

In South Sudan, instead of the collection basket being passed around the pews, usually one person stands in front holding the basket; congregants walk up one by one to add their gifts. Leave aside, for the moment, the anger I often feel when I see the poorest of the poor dropping their very-hard-earned coins into the basket. Surely the Church has this ritual entirely backwards! Shouldn't the presider be stuffing the basket with cash and then passing it around the pews, inviting each parishioner to take what s/he needs for the week ahead? Isn't that how Luke describes the early Christian community in the Acts?

Backwards as it may be, the weekly offering can still carry amazing grace.

In his most recent Christmas letter, Brother Paolo (an Italian Comboni medical doctor who manages a hospital in rural South Sudan) described a recent collection that moved him deeply. Tall, barefoot women — most having come to church from mud huts and many having survived violent displacement multiple times due to war — slowly walk the length of the center aisle while the choir sings above a strong drumbeat. Paolo wrote:

"I saw some stretch and open their empty hands [over the basket], evidently dropping … nothing."

Nothing? Paolo marvels at their humility and courage. He confesses that he, if he had no ready cash, would "remain quietly sitting in my place." Surely, we never want others to see that we have nothing.

There is deep learning here. In my role as director of the nonprofit Mercy Beyond Borders, I am frequently in South Sudan visiting our education projects for girls and our micro-enterprise projects with women and our leadership training of young women for advocacy. Keeping girls in school protects them from early marriages, allows them to develop their gifts, sets them on the path to pursue professional careers. The small loans we provide to women in refugee camps enable them to create sustainable futures for their families, a path upward from extreme poverty. It is easy to believe that we are the ones filling their coffers with coins.

But wait. Perhaps that, too, is backwards. It is these widows, orphans, refugees and displaced persons who enrich us. They stand undefended, "the least among us," often with apparently empty hands. Yet God cherishes empty hands. Miracles happen there, precisely because God stands with those whom the world disregards.

With no material wealth to give, such women connect on a deeper level. They share their struggles, their stories, their hard work, their daily living and dying, their dreams. They know nothing of the rugged independence so cherished by Westerners. They need one another, and they know it. And when some small abundance does unexpectedly come their way, they share it.

My first experience of this emptying was in a Lao refugee camp in Nong Khai, northern Thailand, in the early 1980s. The small convent where I was living initiated a nutrition program for the refugee children in the camp's pre-schools. Long before dawn each day the cook fried hundreds of eggs in large woks over open fires in the convent yard. Several hours later, each child received one cold, now-rubbery egg, delivered atop a leaf. Often, I witnessed children carefully folding up their precious egg in the leaf and setting it aside. When questioned, they told me they were saving it to share with their younger siblings.

One does not need a theology degree to understand that this is real kenosis, the self-emptying of holy ones who cling to nothing but God.

Sufis, the mystical branch of Islam that focuses on inner love rather than external religious practices, have bequeathed to the world a trove of profoundly spiritual 13th century poetry. In the experience of the Sufis, the original whirling dervishes, those who dance before God feel an ecstatic freedom that eliminates the compulsion to cling to anything.

Here is my favorite Sufi prayer, by Jelaladdin Rumi. For me, it sums up the self-offering that lies at the heart of every Eucharist:

Be the one who, when you walk in,
Blessing shifts to the one who needs it most.
Even if you've not been fed,
Be bread.

Be the one: it's a choice. Live for others, not yourself. Allow the gifts you carry, whether abundant or scarce or seemingly absent, to flow from you to others who are in greater need. Even in times of personal emptiness, when you might not feel fulfilled or acknowledged or competent or fed, let goodness flow through you to nourish others.

This is my daily prayer. Empty hands don't prevent meaningful sharing. In fact, they just might be a pre-requisite!

[Marilyn Lacey is a member of the Religious Sisters of Mercy who is a teacher, author, refugee worker in camps, and domestic welcome / resettlement with Catholic Charities in San Jose, California. She founded and directs Mercy Beyond Borders, an international nonprofit working with women and girls in places of extreme poverty.]

Read this next: Sisters use funds, microloans to empower women, small businesses