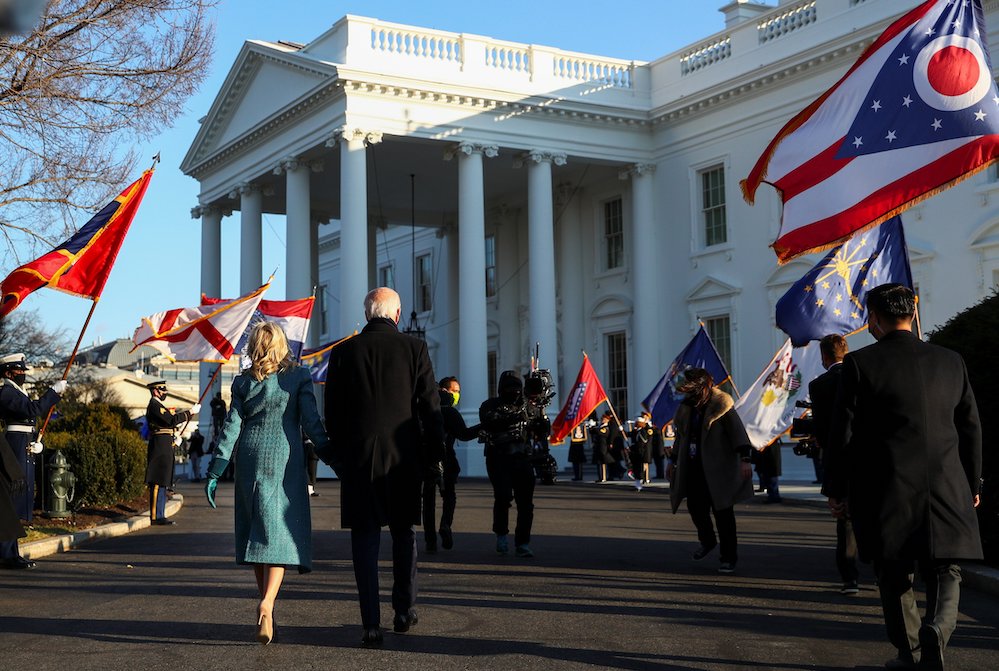 Seven years ago, when my father turned 80 years old, my siblings and I gave him a commemorative book of reproductions of the front page of The Washington Post for each year of his life. Because my dad was born on January 21, it just so happened that every four years, the front page featured the inauguration of the American president, beginning with President Franklin Roosevelt's second term in 1937. This was particularly fitting as my dad is a lover of both the democratic process and history.

Because of the proximity of Dad's birthday to the quadrennial event, I have watched many inaugurations in the company of my father. I remember watching Ronald Reagan's first inaugural as a 7-year-old, on the same day as the American hostages were released in Iran. Four years later, on a very cold day with wind chills below freezing, I remember drinking hot chocolate and watching the inaugural festivities for Reagan's second term with Dad. That year, the parade was cancelled and replaced with an indoor event at the Capital Center, a place familiar to us since our family had regular Washington Capitals hockey tickets, and that was their home arena. I missed the opportunity to attend the inauguration of President Bill Clinton in person with Mom and Dad, as I was attending college on the other side of the country. 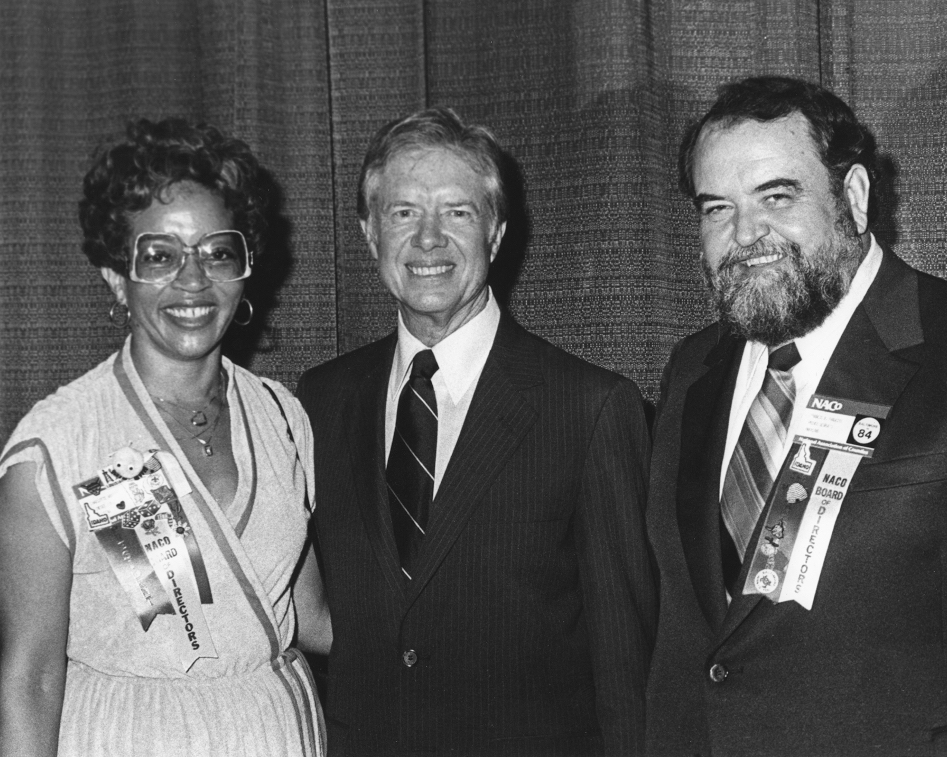 The author's father, right, with outgoing National Association of Counties President Charlotte Williams (who was the first Black NACo president) and U.S. President Jimmy Carter, who was a keynote speaker at the 1979 NACo meeting in Kansas City, Missouri. Susan Rose Francois' father was an elected official of Prince George's County, Maryland, at the time. She was 7 years old and met Carter at the convention. (Provided photo)

More recently, as Dad's health has failed, I've made an effort to spend most birthdays with him at his retirement center. I was with him four years ago when President Donald Trump was sworn in. We watched the pomp and circumstance together, wondering what lay ahead for our nation. A couple of days later, I returned home. While at the airport, I watched cable news stories featuring "alternative facts" about crowd size at the event that Dad and I had just watched together. Trump and his spokespersons were "making all these crazy claims, and then giving crazy responses to refutations of those claims," I told Dan Stockman in a Global Sisters Report interview a few years ago. In response, waiting for my flight, I could feel myself becoming the opposite of nonviolent. I needed to do something productive and peaceful. So I thought, "He tweets — I'm going to tweet a prayer to him every day."

That was four years ago. Let's just say it has been adventure, one I've written about before on GSR. I've also received a bit of press attention for this public act of prayer for our nation's 45th president.

I've come to understand a few things about the public interest in this practice of mine. For one thing, in a world of talking heads and rage tweeting, folks seem intrigued by an approach to the chaos that tries to be peaceful and prayerful. I've heard from a variety of strangers who have told me that reading one of my posts helped them stay calm. Some responses were more incredulous, wondering how I could pray for someone "like that," or wondering why I can't praise his actions regarding one particular life issue, and just ignore the rest. Others have told me, in somewhat colorful language, that I'm wasting my time. "Isn't it obvious that God's not answering?" This has, in turn, led to some interesting tweet conversations about prayer itself and how I don't consider prayer to be a transaction with a puppet master God but rather an act of love and relationship with the power to transform.

My initial decision to begin this public practice of tweeting a nonviolent prayer for him was made a bit impulsively in an airport waiting lounge. And yet, it was public, and it was a commitment. And so I made myself stick with it for the past four years. Each day, I would read the news, praying over the real human impact of policies that separated families at the border or denied the science behind climate change or the coronavirus. I've always prayed with the news, but by committing to pray for the man whose administration made and enforced those particular policy decisions, I opened myself up to something new. Over time, I found myself praying for the man, a human person himself, who occupied the White House. I prayed for him to come to understand that he is a beloved child of God. I prayed for him to experience the peace, love, compassion and mercy of God. I prayed that he might find goodness and kindness in his own life and heart. As I often wrote in my tweets, we all need that.

Who knows what impact, if any, my prayers had on him or the situation? All I know that it was transformative for me. I found myself more and more uncomfortable with the divisive rhetoric on all sides. I became increasingly aware of the dehumanizing language we use against public figures and political foes. My own commitment to a nonviolent response in this messy time grew. It was one small daily act that helped me to make it through the upheaval, discord and division. Impulsive or not, I think the impulse was guided by the Holy Spirit. 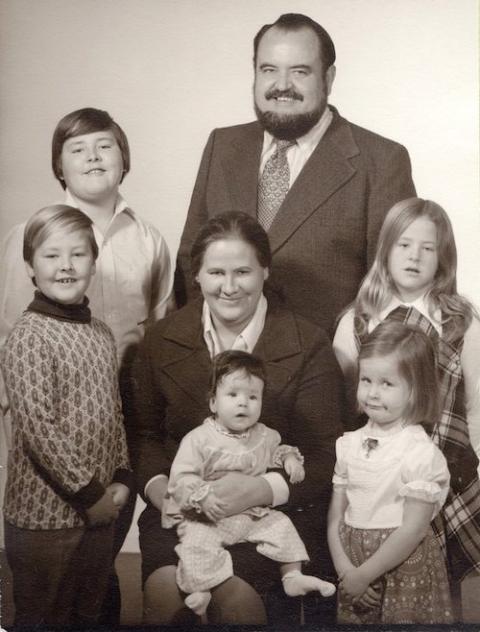 Francois family portrait from 1973. The author is the baby held by her mother — and losing a sock. (Provided photo)

Because of the pandemic, I was unable to celebrate my father's 87th birthday with him, or join him to watch the inauguration of Biden and Vice President Kamala Harris. Instead, the morning of the inauguration, I gathered in our chapel with other sisters in my religious community for a holy hour for peace and prayer for our country. It was a powerful gathering, one repeated I know across the country, by people of goodwill and all religions, joining together in hope.

We have a long road ahead. I agree whole heartedly with Biden: "We must end this uncivil war that pits red against blue, rural versus urban, conservative versus liberal."

May we, each of us, come to understand in our heart of hearts that we are beloved children of God, and that this applies to everyone else, too, whether we like them or agree with them.

As Fr. Leo O'Donovan prayed in his invocation on the steps of the U.S. Capitol, just two weeks after the insurrection: "Be with us, Holy Mystery of Love, as we dream together, to reconcile the people of our land, restore our dream, and invest it with peace and justice and the joy that is the overflow of love."