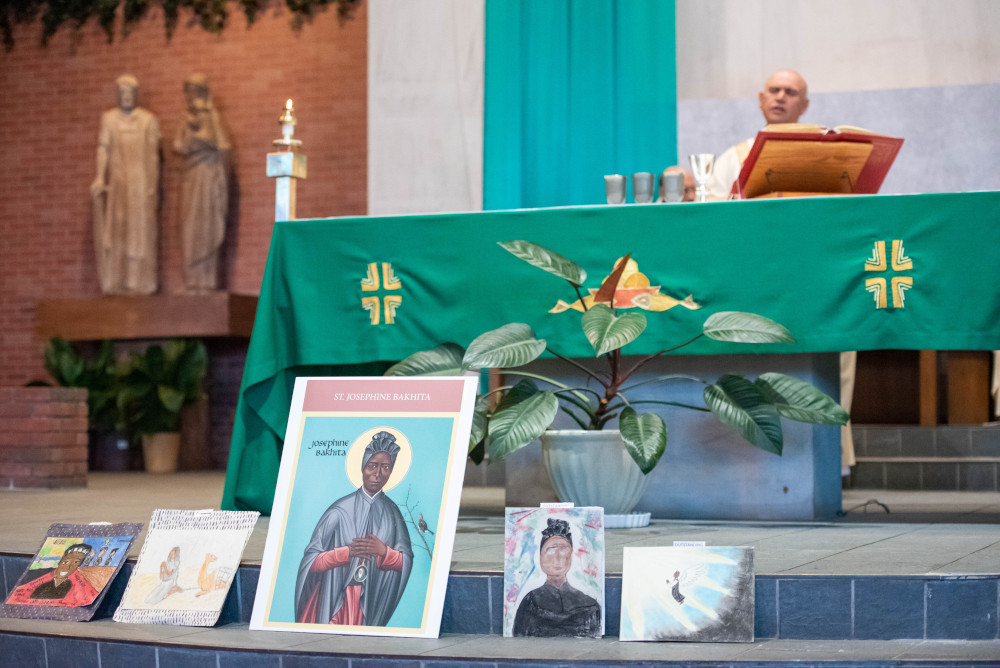 When St. John Paul II canonized St. Josephine Bakhita in 2000, he said the saint is a "shining advocate of genuine emancipation," noting how despite her abduction into slavery at a young age, she well understood God to be the source of true freedom.

At a Mass at St. Camillus Church in the Washington suburb of Silver Spring marking the day and remembering survivors and victims of human trafficking Auxiliary Bishop Mario E. Dorsonville of Washington urged worshippers to pray and act on behalf of the millions of people worldwide who are suffering at the hands of human traffickers.

"In this world, there are close to 25 million people who are (trafficking) victims," said Dorsonville, who also is chairman of the U.S. bishops' migration committee. "That means we are in need of 25 million human encounters ... with holy women and holy men, who might be able to bring these people to Christ and to healing."

Franciscan Sister Maria Orlandini, director of advocacy for the Franciscan Action Network, offered a brief reflection on the life of the Sudanese saint and the importance of confronting human trafficking.

"We remember and pray for survivors and victims of human trafficking," she said. "We pray we may work together to remove the causes of this despicable scourge. Today is also a day of awareness and action. Our prayers ... will not be enough unless we accompany them with the willingness to become aware and get involved with eradicating this evil."

"Having experienced unimaginable sufferings, who better than Bakhita can intercede for people who are also suffering great things?" she asked.

Dorsonville explained how human trafficking has spread to "every single point around our cities ... and it has multiplied its effects."

While there are many people like St. Bakhita who are suffering, he said, "The point is hope, faith and love."

"And (we must) be able to find a moment to pray for them in our daily prayers," Dorsonville said.

After the liturgy, Massgoers were invited to an educational reception to learn about organizations that are anti-human trafficking organizations and that advocate for victims, aid in their healing and work to eradicate a practice often described as modern-day slavery.

Sr. Joan Mumaw, a member of the Sisters, Servants of the Immaculate Heart of Mary, is president of Friends in Solidarity, an organization of Catholic men and women religious who support the religious and others in South Sudan and beyond. She said her ministry is rooted in the belief that trafficking "is best combated with education."

Much of the Friends in Solidarity's work involves training teachers, nurses and others who are able to aid many people who are suffering in South Sudan, a country, she said, where "all they've ever known is war."

In Silver Spring, Sr. Carol Ries, a Sister of the Holy Names of Jesus and Mary, joins with many in the Mid-Atlantic Coalition Against Modern Slavery to stand and pray in silent witness for the human trafficking victims at different times throughout the year on street corners.

"Our hope is that people become aware that trafficking is here," she said. "A lot of people think it is just over there."