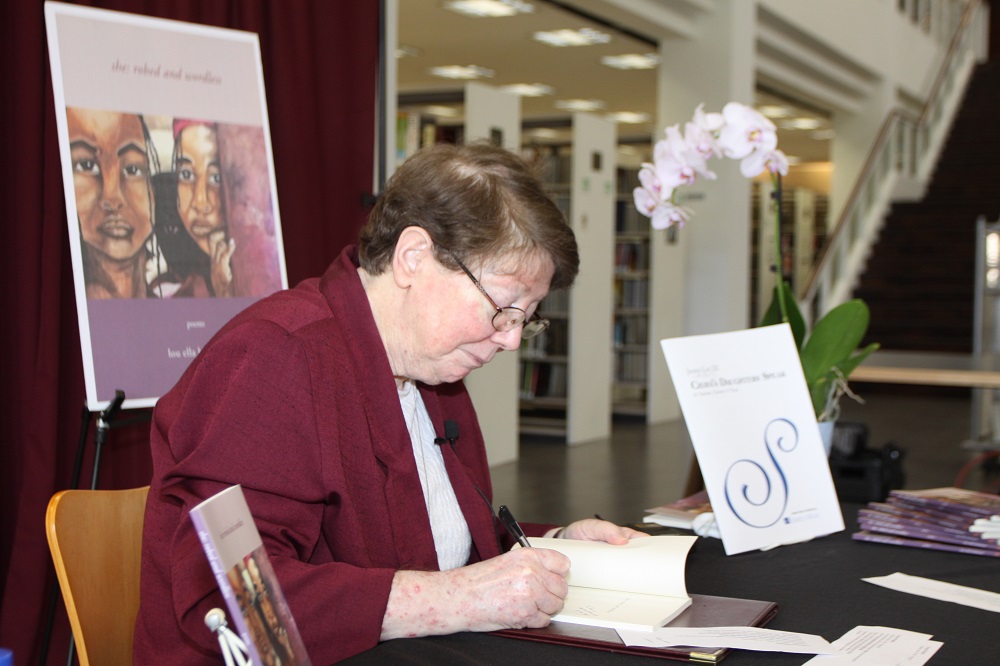 Sr. Lou Ella Hickman signs a copy of her book, she: robed and wordless, at La Retama Central Library in Corpus Christi, Texas, during a presentation May 1. (Courtesy of the Sisters of the Incarnate Word and Blessed Sacrament)

While Sr. Lou Ella Hickman worked toward a master's degree in theology at St. Mary's University in San Antonio, she did a lot of reading, by her own admission. A member of the Sisters of the Incarnate Word and Blessed Sacrament in Corpus Christi, Texas, since 1970, she also spent many years ministering as a teacher at all grade levels, including college.

An illness pulled her toward another ministry: giving voice to the biblical women she read about during her graduate studies. As she recuperated, she wrote poetry, and her work has appeared in numerous anthologies. A collection of her verse was published in 2015 with the title she: robed and wordless, from which composer James Lee III selected five poems to set to music.

"I wanted to find poetry that would include imagined words of women whose thoughts and verbal expressions were never recorded in the sacred scriptures," he explained via email. He was delighted when he read Hickman's poems, integrating them into what he described as a "new song cycle for soprano, clarinet and piano." 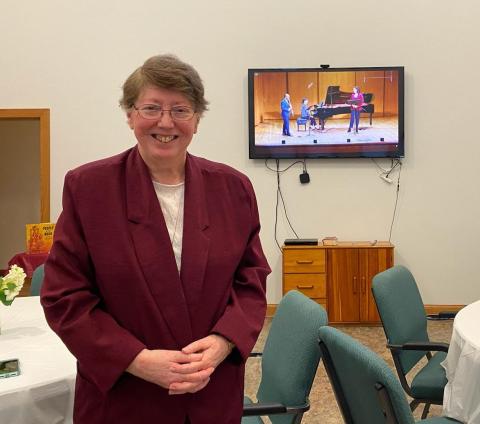 In anticipation of the concert, Hickman appeared at La Retama Central Library on May 1 in Corpus Christi for a book signing and talk. She also invited those in attendance to view the concert, which was available online.

Not yet fully retired, Hickman currently ministers as a spiritual director and is given time to write and publish her poems.

"It has been a dream come true," she said.

GSR: Why did you choose the title she: robed and wordless for your poetry collection?

Hickman: What I was wanting to do with the poems was to give voice to the women of the Bible. Surprisingly, a number of the women have very important roles, even though they may not speak directly. I wanted to get into how they felt, what were their feelings going on at the time.

Because mostly women have been the ones to buy my book — even though that woman may not a person of faith, or any faith — they could identify with someone in the Bible who has been there and done that. They're not alone.

How did your poems come to be set to music?

That is really the $64,000 question. I got an email from my publisher in January, and he told me that Mr. James Lee III had requested permission to put some of my poems to music. It seems Anthony McGill was asked to find someone to compose some music for this concert. James is a very deeply committed Seventh-day Adventist and, I can tell, a very deeply committed Christian. How he got the idea for women of the Bible, I don't know. He went online, and since my book is one of maybe two or three ever published with this theme, I had a really good chance.

He bought a copy; he liked what he saw, and it went from there.

It took me about six or eight weeks to wrap my head around this. One of the problems I had with processing it is: I got very ill. I had to have emergency surgery March 15. I'm still trying to convalesce from it. That was part of the scenario of trying to wrap my head around this incredible miracle. In fact, Tom Lombardo, my poetry editor, and I call the whole situation, from beginning to end, "the miracle of the book."

Were you able to be at the concert?

No, because of COVID. We have some very elderly sisters, and if I had gone, I did not want to give them anything. I wanted to protect them.

Plus, it costs a little bit of money to go. Since I was still convalescing, I thought, "I don't think people would be approving of me to go." I was telling a friend of mine, "I could just see myself blurting out to Susanna Phillips, 'Will you please say hello to Renée Fleming, my superhero?' That is the major reason I'm not going."

We had a little bit of a party here at the house. We had supper early. Janel Benavides, who is our communications director, brought chips and dip and a cake. We had maybe 25 or 30 sisters watch.

I will be getting a DVD, which is nice, so I can rewatch it. [It will then go to the] Heritage Room, and that's all our historical treasures. It's a jewel of the house, next to the chapel. 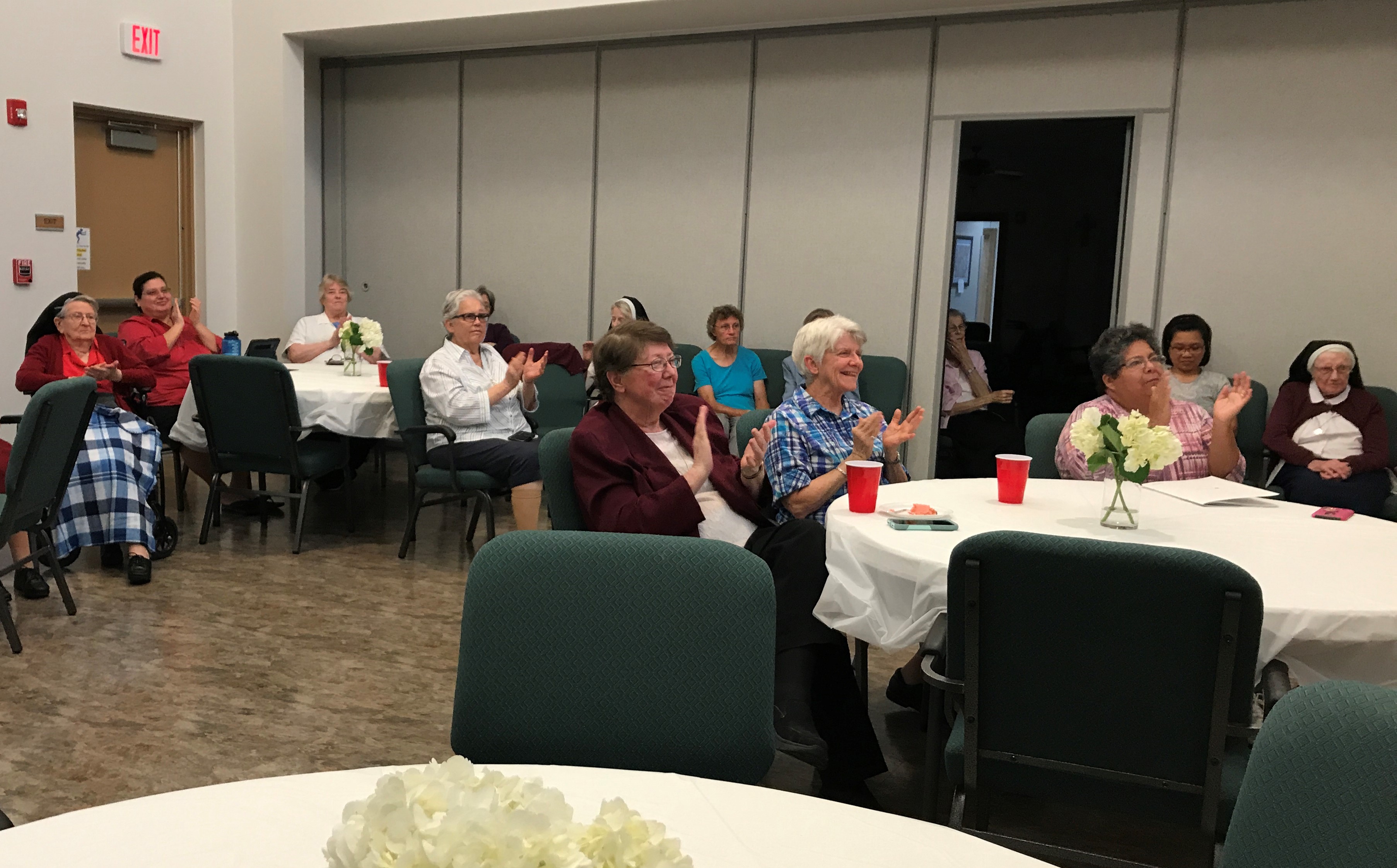 What were some of your other ministries?

I had the privilege of being a sales clerk in a religious goods store, which was a wonderful place to minister. People come in looking for more than a St. Christopher medal. It was a very enlightening and wonderful experience.

[Since my illness] I can work on my own schedule. I can give talks about my book. Before COVID, I gave vocation talks, which is one of my most thrilling ministries.

Read this next: Praying with women in the Bible