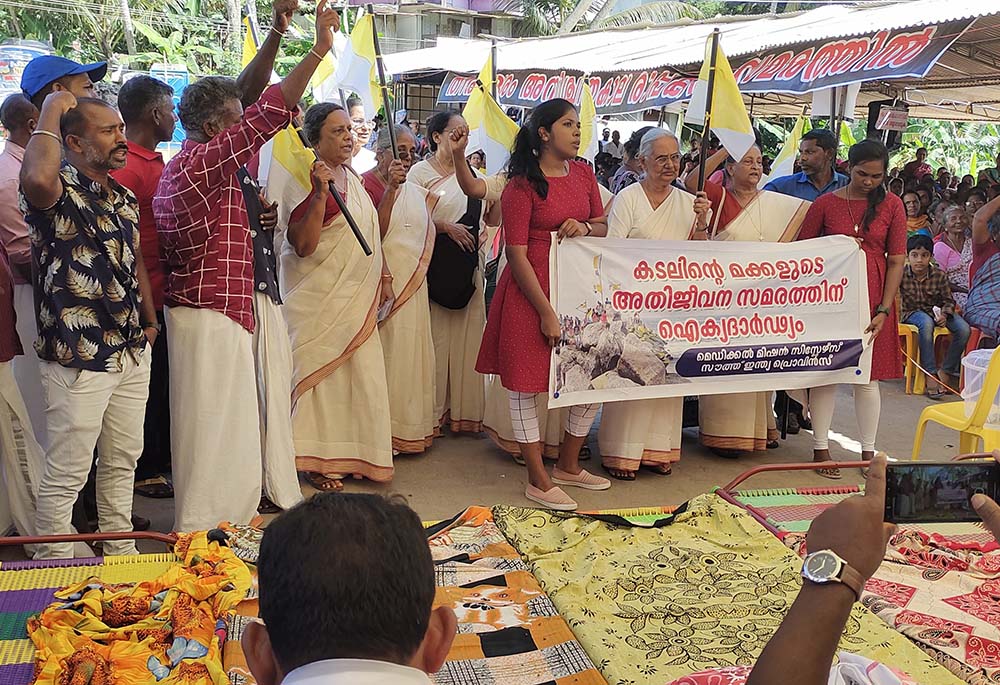 Medical Mission Srs. Theramma Prayikalam (behind the banner, second from the right) and Philomine Mary Thakadiyel (holding the flag behind the banner), who have worked with fisherpeople for more than 30 years, led a delegation of their congregation to the grounds in Vizhinjam, India, where the fishing community is protesting the construction of an international port. (GSR photo/Thomas Scaria)

A fall from a bike during a rally did not deter Sr. Sali Joseph from supporting fishers protesting the construction of an international port in coastal southwestern India.

The fishing harbor being converted into an international seaport "has already caused severe damage to their houses and fishing activities," said the Medical Mission Sister, who is recuperating from her broken leg and head injury sustained during a mid-August protest.

Joseph is among hundreds of Catholic nuns who have joined bishops, priests and activists to oppose the under-construction Vizhinjam International Deepwater Multipurpose Seaport, also known as Vizhinjam Port, on the Arabian Sea coast near Thiruvananthapuram, capital of Kerala state.

Indian businessman Gautam Adani — the second-richest person in the world — is behind the construction of Vizhinjam Port, adding to the 13 seaports and airports he owns throughout India. Construction of the port is under agreement between Adani's company and the Kerala government, as well as the patronage of the federal government, as the port is being built on government land and sea.

According to the Kerala State Coastal Development Corporation, 42 villages around Vizhinjam coast have roughly 183,000 fishers, 95% of them Catholics belonging to the Trivandrum Latin Archdiocese.

Joseph said all nuns in Kerala now support the fishers after major superiors pledged their support to the protests. Since her accident, Joseph has continued her support through fasting and prayer.

The fishers demand a rehabilitation package for those who have lost houses and occupation because of the port; subsidized kerosene; and a study about the environmental impact of the project.

More than 500 fisher people have been temporarily rehabilitated at a warehouse and await a proper shelter.

Following several rounds of talks and protests by the fishers, the Kerala government organized a function Sept. 6 to distribute 5,500 rupees (US$70) as rent compensation for a few families who lost their houses.

Sr. Lissy Joseph, who was among more than 2,000 protesters at Vizhinjam Sept. 6, told GSR that the port is being built at a fishing harbor, evicting fisher people from their coastal village.

The half-built port has already caused much environmental destruction, such as severe sea erosion and destruction of more than 500 houses, the member of the Daughters of Mary Help of Christians said.

Lissy Joseph said the fishing community was already suffering from the coronavirus pandemic and acute sea erosion since the port construction began in 2019. (Construction came to a standstill during pandemic lockdowns, and resumed in early 2022.) The new port has forced them to take alternative routes for fishing that drain their finances, time and energy.

"One of their demands is to reduce the price of kerosene used as a fuel for the fishing boats, but the government has ignored them," she said. On the other hand, fishers in the neighboring state of Tamil Nadu get the fuel at a subsidized rate.

Lissy Joseph also pointed out that the initial study reports were prepared to favor corporate firms, and the archdiocese and fisherpeople realized the port's impact only after the project was launched.

She blamed the Vizhinjam project for the sea erosion and house destruction in the past two years. "That's why we demand a fresh study before continuing the project," she said.

Houses destroyed by sea erosion are seen near the site of an international seaport under construction in the southwestern Indian state of Kerala. (GSR photo/Thomas Scaria)

Five fishermen were killed Sept. 5 after a fishing boat capsized at Muthalapozhy near Vizhinjam, with protesters blaming the new port's unscientific construction.

The sea erosion destroyed several houses in Valiyathura, a fishing village closer to the port, and seawater has entered the parish church, bringing down its boundary walls.

Alexander Victor, who now drives a three-wheeler taxi for survival, told GSR he lost his ancestral house in the sea erosion and that his own house is on the verge of destruction. "Dozens of houses in our village have collapsed since the port construction began," he alleged.

Sr. Anna Thayyil, who brought women to protest near the port, said most fisher families were in "utter poverty" during the COVID-19 lockdowns and have no money even to buy kerosene to go fishing. "They have come out to protest out of sheer frustration," Thayyil, superior of the local Daughters of Mary Help of Christians congregation, told GSR.

Thayyil said they now educate girls of the fisher communities so that they can find alternative jobs, "but how about the elders who only know fishing and are unwilling to leave the sea?"

Medical Mission Sisters visited the protest site in Vizhinjam Sept. 6 to support the ongoing protests, led by Srs. Theramma Prayikalam and Philomine Mary Thakadiyel, whose more than 30 years of work among fisherpeople has led to several movements for reform.

"The fishermen and women are the children of the sea whose life has become a question mark as the corporates encroached their coasts," said Prayikalam, addressing the 2,000 protesting fisherman and pledging her congregation's support to the ongoing struggle.

As the protesters cheered the two nuns, Prayikalam said, "I have accompanied you for over 30 years, and even at this age, I am willing to be with you for the rest of my life, too."

Thakadiyel, who undertook an historic 24-day hunger strike in 1985 to safeguard the rights of the fishing community, said the fishermen have a special place in the Bible and Christianity. "The church cannot ignore them at this hour of crises," she told the gathering.

Fr. John Bosco, the parish priest of St. Bartholomew Church Poovar, near Vizhinjam, told the protesters Sept. 6 that the priests and the nuns at the protests "are not outsiders but very much part of the fishing communities." He was among six priests and several nuns who sat on a hunger strike on that day.

The previous day, Archbishop Thomas Netto of Trivandrum and his predecessor Archbishop Emeritus Soosa Pakiam — both from fisher communities — launched the hunger strike at the protest grounds as part of intensifying the movement.

Also involved in the protests are the members of the Teaching Sisters of St. Dorothy Daughters of the Sacred Hearts, known as Dorothean Sisters.

The Dorothean Sisters shout slogans against the eviction of the fisherpeople due to the construction international seaport. (GSR photo/Thomas Scaria)

One of them, Sr. Shirley Chathanpadathil, told GSR that they will not rest until the fisher people's demands are met and the port is closed for further studies. "In most of our villages, people's houses, churches, schools and convents are on the seashore and face serious threats."

The Franciscan Sisters of the Immaculate Heart of Mary from Kollam, 40 miles north of Vizhinjam, came with other sisters and their parish community to support the protests.

One of them, Sr. Jeo Mary, told GSR that the fishers always live in uncertainty and are at the mercy of the sea and its vagaries.

Srs. Jeo Mary (right) and Baptista Mary, both from the Franciscan Sisters of the Immaculate Heart of Mary, traveled from their convent in Kollam, India, 40 miles north of Vizhinjam, to protest the seaport. (GSR photo/Thomas Scaria)

On Sept. 8, Kerala celebrated Onam, its harvest festival, when people irrespective of their religions organize community meals of at least 13 vegetarian dishes on banana leaves.

The protesters, however, skipped the meal and sat with empty banana leaves in front of Vizhinjam Port.

Fr. Eugine Pereira, vicar general of the Trivandrum Archdiocese, says the campaign against Vizhinjam Port would be expanded as a state level movement as the authorities continue to ignore their demands.

"We have held several rounds of talks with the government, but no definite solutions have been worked out so far," he told GSR.

On Sept. 10, churches in Kochi — the commercial capital of Kerala, 210 miles north of Vizhinjam — organized a 10-mile-long human chain in support of the fishers.

The following day, all churches in the Trivandrum Archdiocese read Netto's third pastoral letter on the Vizhinjam protests, which called for more social support from all communities and organizations, as the protests expand statewide.

Earlier on Sept. 1, the Kerala High Court directed the state government to provide police protection to the officials, employees and contractor of the Adani Vizhinjam Port Private Limited to carry out the construction. The government then called for intensifying security around the port to help the construction; however, protests continue in the presence of police.

"All this shows both the corporate firms and the government are cheating the fishermen community by giving them false promises and fake study reports," Prayikalam said.

She regretted that "all our systems favor the powerful, and our people continue to be oppressed."