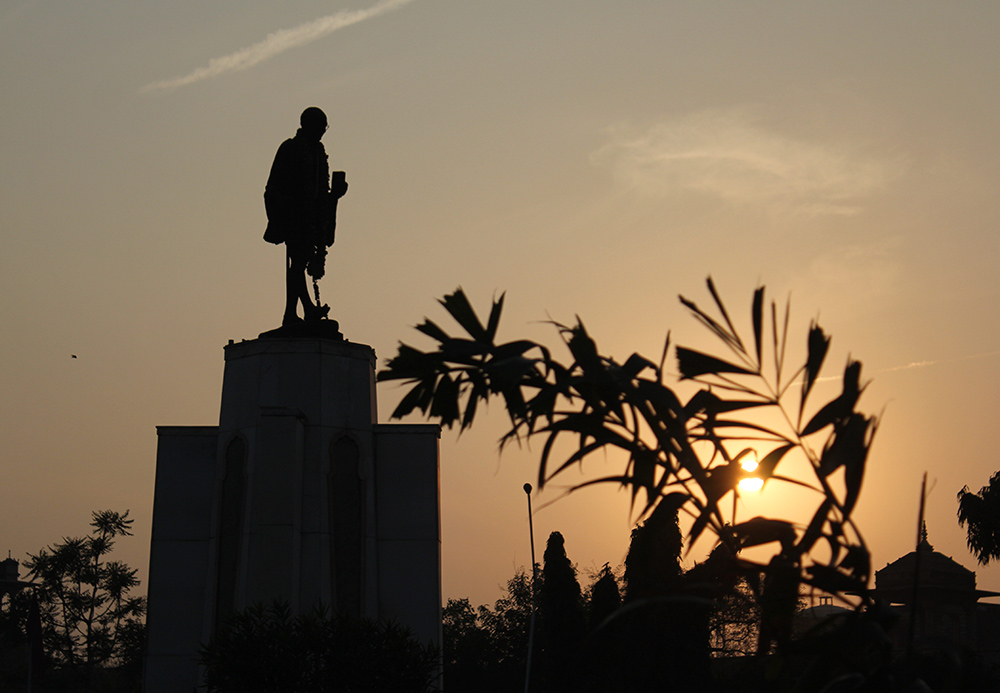 A statue of Mahatma Gandhi in Jaipur, India (Wikimedia Commons/Vatsaltyagi)

For us in India, there are two important days that remind us of the "father of our nation," Mahatma Gandhi: his birth anniversary on Oct. 2, and the anniversary of his assassination Jan. 30. It is sometimes unbelievable to me that such a great human being walked this earth. A frail human being but with enough great stamina, determination and charisma to lead an entire struggle for freedom in a nonviolent manner.

This apostle of nonviolence has proved for us over the years that you can win if you are focused and ready to go the whole way. If there is a time that this principle is important, it is now. There is such violence around our globe, and we have become so accustomed to the way we live — our lifestyle and our consumeristic values.

This year, his birthday fell in the festival season in North India, where the goddess Durga Mata is revered and remembered, and for whose festival big pandals (tents) are put up and decorated. Many women and men fast for nine days, eating only fruit. So, this festival takes prominence and very few take time off to remember the father of our nation.

Is it a coincidence, or is it saying something more — and who is it who is gaining prominence? The young people of today have alienated themselves from the values embodied by Gandhi; there is an erosion of human values. We are ready to find loopholes and faults, and have no hesitation in belittling past accomplishments.

Perhaps we forget the context of that time; we fail to understand or to accept those were different times. They in their wisdom did what was best.

Our very thoughts and actions are becoming so violent. There seems to be no respect for the struggles and sacrifices that were needed to gain something so precious as freedom, and doing so without violence. It is almost as if it has never been heard in our history. Maybe it is because we have never experienced slavery, alienation or discrimination.

The mahatma experienced discrimination in a very personal way, when he was thrown out of the first-class carriage in South Africa. It was at that time that he resolved to return to India and fight for our freedom. Sometimes, it is only when you experience something like this that you can be awakened to believe that another way of life is possible.

Today, across the globe, there is so much violence that is being directed against our common home; in Laudato Si', Pope Francis invites us to become nonviolent in our words, deeds and thoughts. It is an invitation to give up greed and the amassing of wealth at the cost of destruction.

Unfortunately, India as a country is going through very difficult and different time — and with the erosion of good human values, it appears that we are losing a whole generation. The present technology makes us demand quick results, and there is not much incentive to persevere in our values.

But all is not lost! Thank God, there still remains a small band of good people who keep such values alive and strive to make a difference. It reminds me of Abraham bargaining with God, begging that for the sake of a few good people God would agree not to destroy a city (Genesis 18:32). There is hope in this belief; we have to be hopeful and believe that somewhere, sometime and somehow, goodness will unfold.

Nonviolence is the weapon that can win — that can conquer and take us forward. Violence will only breed hatred and enmity. Our world needs this nonviolent movement. We need to go to the core of our being, to grow in the awareness that we have a responsibility to hand down this unique legacy that makes us Indian; it then becomes imperative that we embody nonviolence.

We must respect this legacy that has been handed down to us, and must keep the lamp alight for future generations to be inspired and walk the nonviolent path — we owe it to those gone ahead of us. Even though we are a small band of people, we remember that it was a small band of men and women who spread the message of Jesus.

The new religion that is being practiced is that of inclusiveness, leaving no one behind, not building bigger houses but extending our tables so that all can partake of our abundance. The very fact that God sent his only Son in the form of a human being makes it more relevant today to be human, to learn from our cosmos. Nature gives and continues to give to all.

Due to the advance of technology, our younger generation has given up the habit of reading. There's a wealth in the book The Story of My Experiments With Truth — Gandhi's autobiography. We have to keep Gandhi alive for our world, which is in dire need of nonviolence in the midst of the chaos that we have created. May this simple, honest and dedicated apostle continue to stir us and fill us with courage to walk the road less traveled.

Our emphasis on one religion is shaping our world and we have to make a shift from being the only one to becoming one among many, to becoming inclusive, to make room for the least, the lost and the last.