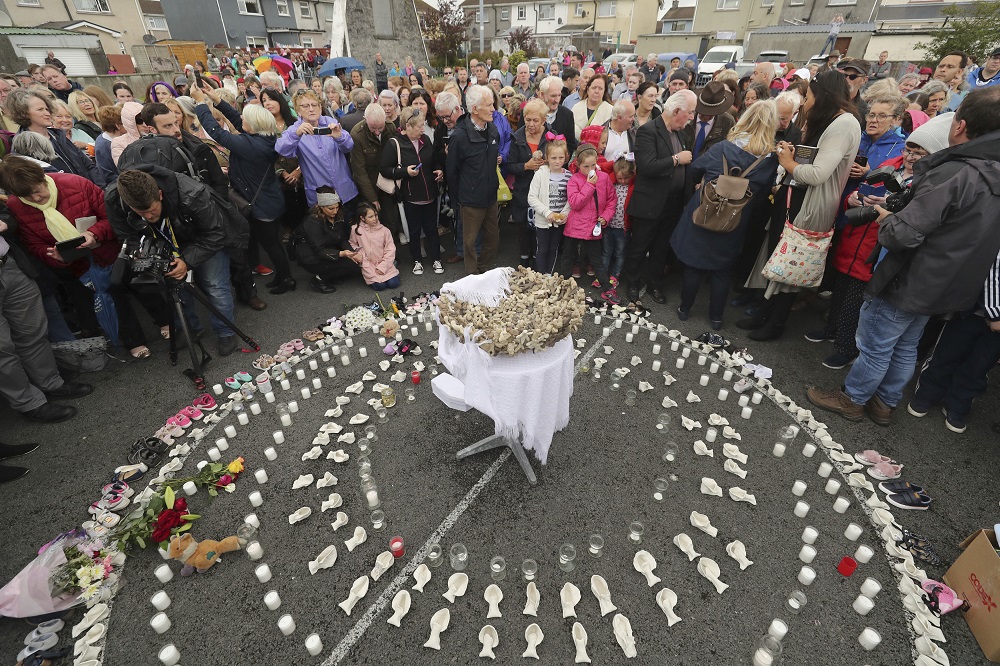 People gather Aug. 26, 2018, to protest at the site of the former Tuam home for unmarried mothers in County Galway, Ireland. (PA via AP/Niall Carson)

The head of the Catholic Church in Ireland on Jan. 12 unreservedly apologized to the survivors and those personally impacted by the findings of an investigation into mother and baby homes for unmarried mothers, many of which were run by religious congregations.

The report, which was published Jan. 12 after five years of investigation, details the harsh treatment of about 56,000 unmarried mothers and about 57,000 children in 18 institutions from 1922 to 1998.

The commission, led by Judge Yvonne Murphy, revealed that up to 9,000 children died at the homes. In 1946, the death rate among infants in mother and baby homes was almost twice the national average.

While mother and baby homes were not unique to Ireland, they existed for a longer period of time than in other countries. Irish homes were also larger: Scottish mother and baby homes ranged in size from 18 to 30 beds, while the average number of women in the early 1950s in Sean Ross Abbey in County Tipperary and Castlepollard in County Westmeath, both run by the Congregation of the Sacred Hearts of Jesus and Mary, was 140 or higher.

This size resulted in Irish mother and baby homes being impersonal and highly regimented, the report states. It also notes that the proportion of unmarried mothers sent to homes in Ireland was probably the highest in the world.

The report also found that while "there is no doubt that women in mother and baby homes were subjected to emotional abuse," there is "very little evidence of physical abuse and no evidence of sexual abuse." 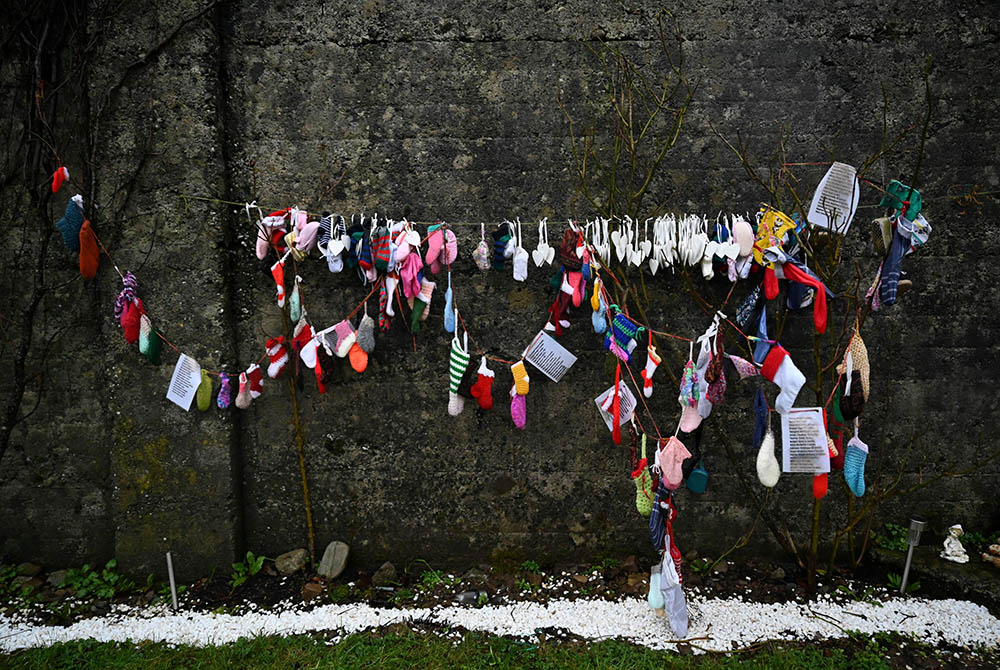 Baby clothing and other items hang from a wall at a cemetery in Tuam, Ireland, where the bodies of nearly 800 infants were uncovered at the site of a former Catholic home for unmarried mothers and their children. The photo was taken Jan. 12, the day a commission investigating the treatment of women in such homes released its report. (CNS/Clodagh Kilcoyne, Reuters)

In his statement, Archbishop Eamon Martin, Primate of All Ireland, said the church in Ireland was "clearly part of that culture in which people were frequently stigmatized, judged and rejected."

He said the commission's report exposes the culture of isolation, secrecy and social ostracizing that faced the women and their children in Ireland, and he appealed to all in positions of leadership in the Irish church to study the 3,000-page report carefully and "especially to spend time reflecting on the courageous testimonies" of the witnesses to the commission.

"Together we must ask 'How could this happen?' We must identify, accept and respond to the broader issues which the Report raises about our past, present and future," he said in the statement.

At a Jan. 12 press conference, Minister Anne Rabbitte of the Department of Children, Equality, Disability, Integration and Youth described the publication of the report as "a moment of intense turmoil for us as a nation."

Referring to the report as a "brutal, gruesome and horrifying" document, she said religious organizations had cultivated a culture of indignity. She recounted one testimony, which told how a nun said to a woman at the birth of her baby, "Another piglet born into the world."

At the same press conference, Prime Minister Micheál Martin said he believed those religious orders associated with the homes should make a financial contribution to a redress scheme. 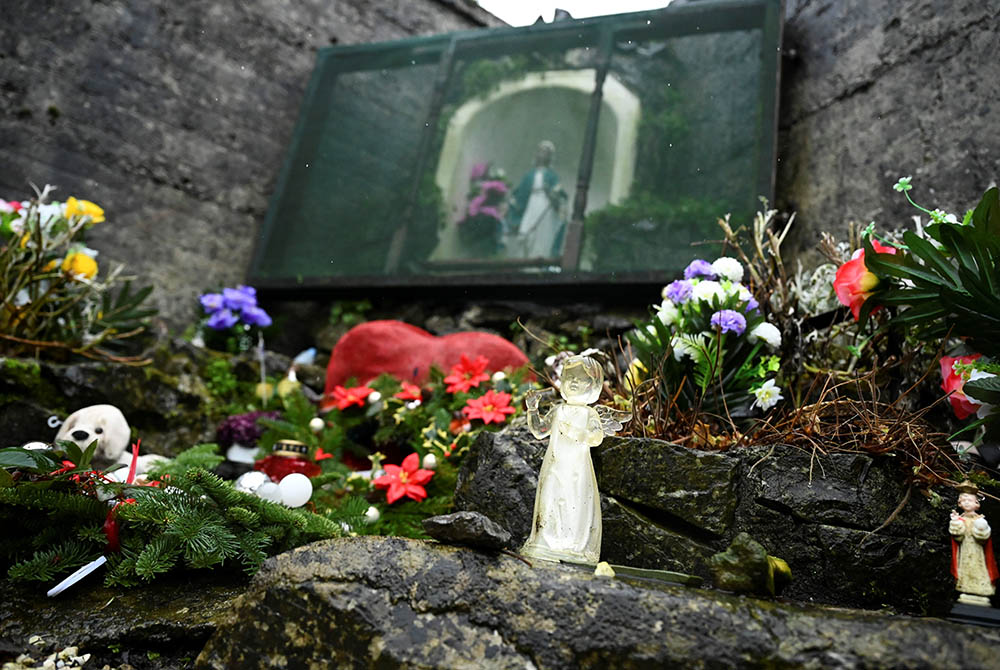 An angel and statue of Mary are pictured at a cemetery in Tuam, Ireland, where the bodies of nearly 800 infants were uncovered at the site of a former Catholic home for unmarried mothers and their children. The photo was taken Jan. 12, the day a commission investigating the treatment of women in such homes released its report. (CNS/Clodagh Kilcoyne, Reuters)

A spokesperson for the Bon Secours Sisters, the religious order that ran the notorious Tuam mother and baby home from 1925 to 1961, confirmed to Global Sisters Report on Jan. 13 that it intends to participate in a redress scheme.

In a statement, the Bon Secours Sisters said the report presented "a history of our country in which many women and children were rejected, silenced and excluded; in which they were subjected to hardship; and in which their inherent human dignity was disrespected, in life and in death. Our Sisters of Bon Secours were part of this sorrowful history."

Sr. Eileen O'Connor, area leader of Sisters of Bon Secours in Ireland, said in a statement, "We did not live up to our Christianity when running the Home. We failed to respect the inherent dignity of the women and children who came to the Home. We failed to offer them the compassion that they so badly needed."

"We acknowledge in particular that infants and children who died at the Home were buried in a disrespectful and unacceptable way. For all that, we are deeply sorry."

The congregation was one of those the report criticized over its failure to keep records of the burials of children who died in their institutions. 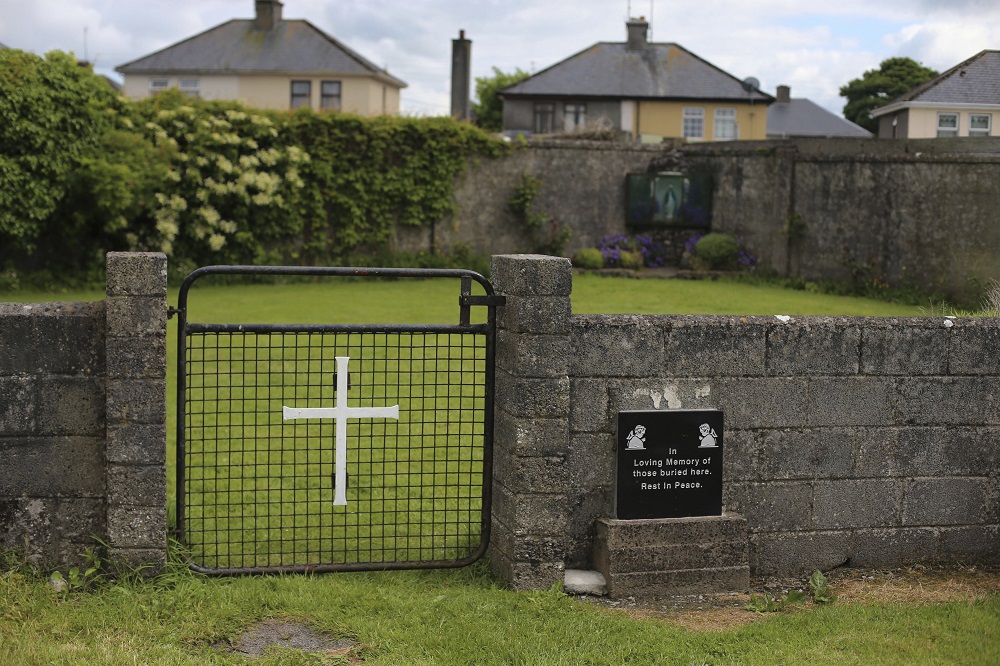 The site of a mass grave for children who died in the Tuam mother and baby home in Tuam, County Galway, Ireland, on June 4, 2014. (PA via AP/Niall Carson)

The commission said it was unable to establish where the majority of 923 children who died in Bessborough home in County Cork were buried because the congregation that ran the home failed to keep a register of infant burials and burial locations, even though they kept "quite comprehensive" records of the arrivals and departures of residents.

In 1934, Bessborough, run by the Congregation of the Sacred Hearts of Jesus and Mary, had the highest infant mortality rate among the country's mother and baby homes.

In its statement, the Congregation of the Sacred Hearts of Jesus and Mary said it was "a matter of great sorrow to us that babies died while under our care" at its three homes and that the congregation was "distressed and saddened" that it had been so difficult to prove with legal certainty where many of these infants were buried.

"We did everything possible including the engagement of a professional historian to assist us in our dealings with the Commission on this vitally important matter," the sisters said in the statement.

However, the commission in its report said it was "perplexed" at the inability of any member of the congregation to identify the infant burial place in Bessborough and added that it is "very hard to believe that there is no one in that congregation who does not have some knowledge."

Similarly, the commission said there must be people in Tuam who know more about the burials there. Historian Catherine Corless revealed the existence of death certificates for 796 infants in Tuam but no corresponding burial register, which gave rise to fears of a mass grave in the grounds of the Tuam home. That prompted calls for an investigation of the site and all mother and baby homes.

In his statement, Archbishop Martin appealed to anyone with information about burial places in mother and baby homes to come forward and help identify them so they can be appropriately marked by their families.

Prime Minister Martin issued an apology in the Irish parliament Jan. 13 on behalf of the state to the victims of the mother and baby homes, saying the state had to be willing to confront hard truths and accept "deeply uncomfortable" parts of its history.

"The report presents us with profound questions. We embraced a perverse religious morality and control, judgmentalism and moral certainty, but shunned our daughters," he said. "We honored piety but failed to show even basic kindness to those who needed it most."

Bishop Fintan Gavin of Cork and Ross, in whose diocese the Bessborough mother and baby home is located, said in a Jan. 13 statement, "Through a culture of fear, judgement and secrecy, women who were pregnant felt isolated and abandoned and had nowhere to turn but to these institutions."

He added: "I feel a sense of shame and embarrassment for how as a Church and a society we failed so often to respond compassionately to their needs."