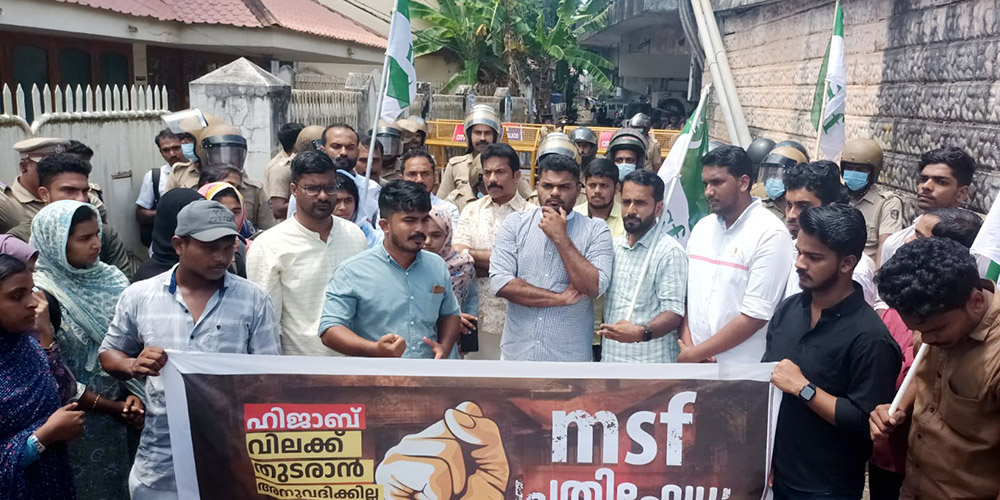 Muslim men protest Sept. 26 in front of Providence Girls Higher Secondary School, Kozhikode, in the southwestern Indian state of Kerala, demanding withdrawal of a ban on wearing the hijab in classrooms. The school is managed by the Apostolic Carmel congregation. (S. Kumar)

Catholic nuns in India lament the development of what they consider an unnecessary controversy — one that equates their veil with the headscarf Muslim women wear, at a time when the hijab is banned in academic institutions within the state of Karnataka.

"This seems to be part of a well-orchestrated agenda to suppress the rights and freedom of women," said Sr. Celine Paramundayil, a member of the Medical Mission Sisters.

The move led to protests from Muslim students and other Islamic organizations. 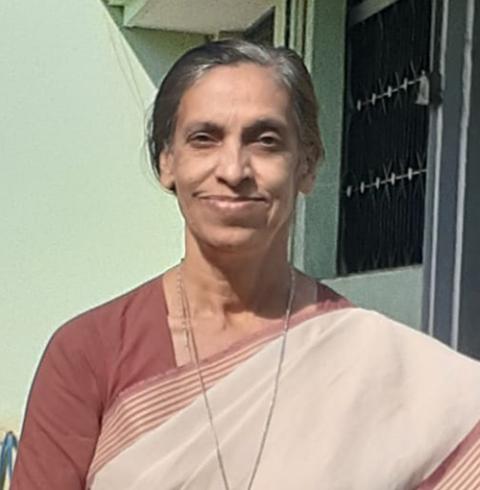 As the protests continued, the Karnataka government, led by the Hindu nationalist Bharatiya Janata Party, banned the use of hijabs in academic institutions in the state Feb. 5. The order prohibited wearing clothes that disturb equality, integrity and public order in schools and colleges. The case eventually went to the Supreme Court Oct. 13, where a split verdict forced the matter to a large bench for adjudication. (The court has yet to schedule a hearing for the case.)

St. Joseph of Cluny Sr. Norah Alunkal, secretary of the sisters' section of the Conference of Religious India, told GSR she views the protests as "nothing but a very calculated move to implement their religious dress code in our academic institutions and gain legitimacy," adding that there have been similar attempts in France and other countries.

"It is the strategy of the political Islam to drag the veil of the Catholic nuns to protect the hijab from any legal trouble," Vallikkatt told GSR.

Muslims, however, deny the allegations, including Quami Mohammad Umar, a prominent Muslim cleric based in the central Indian state of Madhya Pradesh.

"The Muslim community doesn't have any hidden agenda to target anyone, including Catholic nuns who wear veils," he told GSR, adding that religious symbols and dress codes of other religions are allowed everywhere, but when it comes to hijabs, the Muslim community is discriminated against.

"We live in a secular democratic country and therefore, religious dress codes and symbols of each religion must be respected," he said.

"We have no objection to anybody wearing their religious dress codes, including the nuns wearing their veils. But our point is to allow us to do the same."

K.T. Jaleel, a Muslim leader and member of the legislative assembly in Kerala, joined the debate in a viral Facebook post, alleging discrimination against Muslim girls as Catholic nuns are allowed to teach and study wearing veils.

"It is puzzling to say that where nun teachers are allowed 'hijab' [veil], female students are not allowed the same right," he wrote. "In many colleges and universities, girls are studying as nuns. No one has ever objected to it. No one has gone to court. No court has intervened in the matter. So why the uproar only in the case of 'Hijabi'?"

In response to Jaleel's Facebook post, Sr. Soniya Theres, a member of the Daughters of St Joseph, argued, "The veil of a Catholic nun is not like the hijab that little girls in the Muslim community are made to wear when they are not aware of what it is." A Catholic nun's veil, she said, is the sign of her commitment to serve God and society, and not all congregations require their members to wear one. 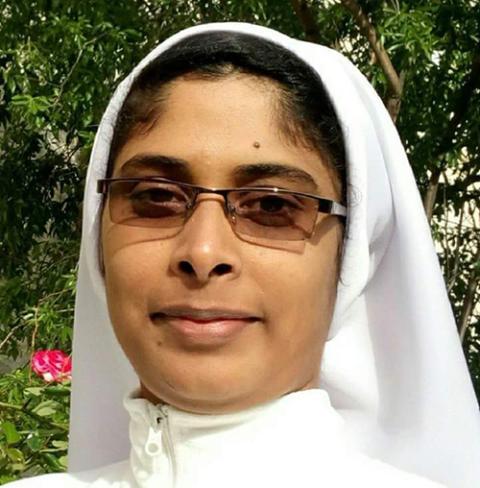 Catholic nuns wear veils as part of our professed life — not because their parents force them, Theres told GSR. "It is our choice out of free will."

She said a Catholic nun accepts a veil only after turning 18, the age of maturity in India, unlike Muslim girls who are trained to wear a hijab when they are too young to be able to decide for themselves or know what it is.

Paramundayil, who represented the global Medical Mission Sisters at the United Nations for 10 years, said she sees this as an attempt to curtail the freedom and rights of women "earned through long battles time to time."

She said Indian women have come a long way from such discriminations and gained dignity and status: "Our women, irrespective of their religion affiliations, should get constitutional rights such as freedom, equality and protection from exploitations of all sorts."

Such attempts to make the hijab illegal in a secular nation like India, she noted, coincide with Islamic countries like Iran facing unprecedented protests against the use of hijab. Security forces have killed roughly more than 300 people in Iran protesting against hijabs, after Kurdish Iranian Mahsa Amini, a 22-year-old Muslim girl, died after being taken into custody for allegedly breaching the hijab rule.

In India, a few Catholic schools in Kerala and Karnataka states were attacked by Muslim groups over the hijab dispute: In one case, Sept. 26, Islamic activists protested Providence Girls' Higher Secondary School in Kozhikode, Kerala. The school, managed by the Apostolic Carmel congregation, forced a Muslim girl to drop out because she was not allowed to wear her hijab in school. In a clash with the activists amid the demonstration, five police officials were wounded.

Police block the entry of Muslim protesters into the campus of Providence Girls Higher Secondary School, Kozhikode, a town in the southwestern Indian state of Kerala. The Muslims insist on allowing female students to wear a hijab in the classroom. (S. Kumar)

Fr. Jacob G. Palakkappilly, spokesperson of Kerala Catholic Bishops' Council, told GSR he suspects this controversy is intended to destabilize Christian education institutions in the long run by leveling false allegations of discrimination. "Our academic institutions are administered within the mandate given by the Indian constitution and other laws in the country," he said.

Christians manage the largest number of educational institutions among nongovernment groups in India. Right-wing Hindu groups view Christian schools and colleges as a great hindrance to their plan to turn India from a secular to a Hindu nation, Palakkappilly told GSR. He said the attacks from Muslim groups will further affect the running of the Christian educational institutions.

He urged the government and law-enforcing agencies not to succumb to the pressure from such fundamentalist elements. While the Muslim community also manages education institutions, no one creates any trouble for them, he added.

In a country of 1.3 billion people (where Hinduism claims 80% of India's population), Christians make up roughly 2%, while Muslims make up 14%, according to the 2011 national census.