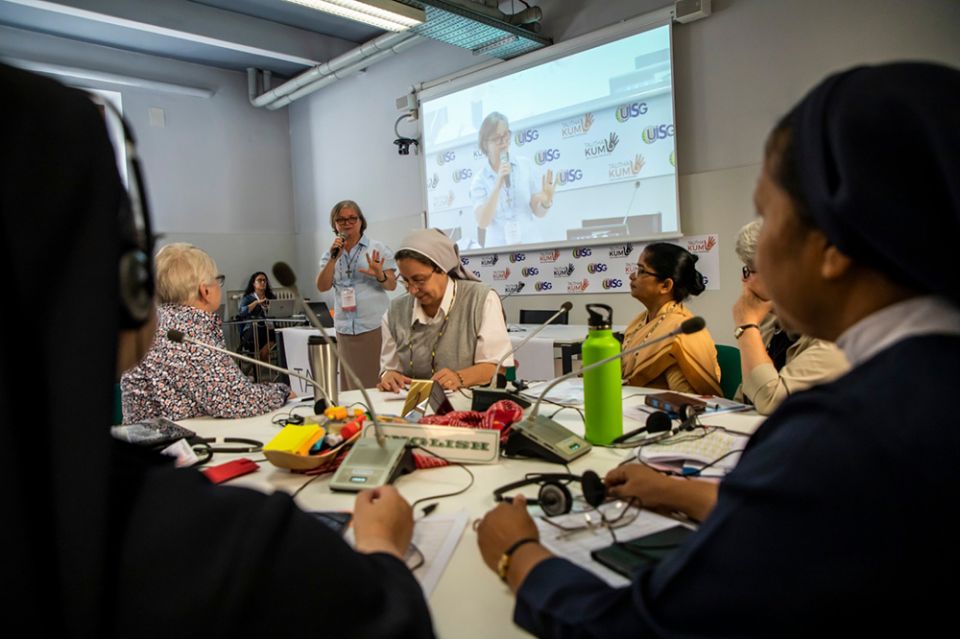 Editor's note: Global Sisters Report is focusing on the efforts of sisters to end human trafficking as Talitha Kum, the international anti-trafficking network of religious, launches its Nuns Healing Hearts campaign and marks its 10th anniversary in Rome. Since its founding in 2014, GSR has dedicated a section of its coverage to sisters who in various ways fight human trafficking. Read all of our coverage.

Rome — It was a week of singing, reflecting, socializing, praying and sharing, but the Talitha Kum sisters, united in their anti-trafficking ministry, had gathered with a mission.

Ten years had passed since the initiative launched under the International Union of Superiors General, or UISG, bringing together networks of sisters all over the world under the umbrella-like network. The 86 delegates of women religious (with some consecrated men) gathered Sept. 21-27 in Rome from 48 countries to recognize the work they have accomplished and celebrate the survivors they have known and helped.

Together, they met the pope, who applauded their work; learned best practices from one another while also providing emotional support, bonding over a challenging ministry; and looked ahead with a deliberate plan, taking what they have learned over the past few years to set new goals for the international sisterhood.

"We should be creative and embody the different culture that we are asking of the church and everybody," Comboni Missionary Sr. Gabriella Bottani, Talitha Kum's international coordinator, told Global Sisters Report.

"What we call the church and government to do, we should be able to do first, to show that it is possible: another world, another way of living with people, another kind of economic model."

Murray: 'Raise your voice, wherever you are'

In her address to the Talitha Kum sisters Sept. 25, Loreto Sr. Patricia Murray recalled how one time, on her way back to Rome from a conference in Africa, she saw dozens of young women in the airport who were on their way to work as domestic servants in another part of the world.

"I began to talk to them, and I began to realize the abject ignorance they had of where they were going, sent off by their families out of poverty to make money to send home," Murray, the executive director of UISG, said, adding that was an example of the "vulnerabilities we must tackle that exist in all our societies."

Murray, a sister of the Institute of the Blessed Virgin Mary, said UISG has put "enormous emphasis" in the past six years on the work sisters do worldwide in this anti-trafficking realm. And while humility tends to keep sisters from publicizing the work they do, she said, "there's another way of living humility. Humility is truth. We have to tell the truth of what we are doing and with whom we are doing it for the sake of those who are most vulnerable in our world today."

She encouraged sisters to "raise your voice, wherever you are. ... Speak out and stress the value of collaboration together." Sharing insights and gifts across congregations, that "spiritual treasure which is within us," is what their founders intended, Murray said. 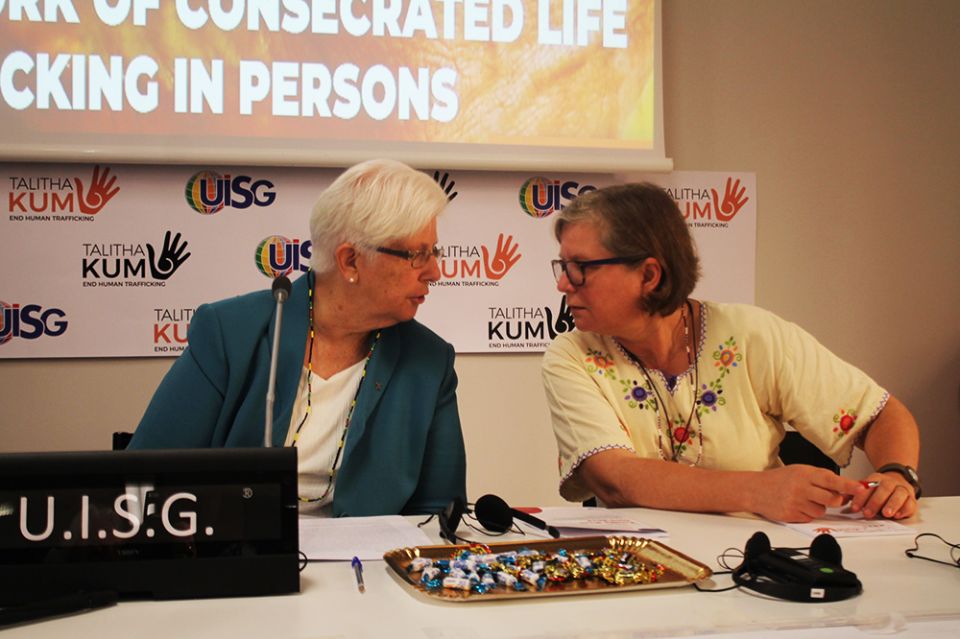 Invoking a phrase from Isaiah 54:2 — "Enlarge the place of your tent; stretch your tent curtains wide; do not hold back; lengthen your cords, strengthen your stakes" — Murray said this image speaks to the work of Talitha Kum, its "flexibility, enlargement, unbonded hospitality, rootedness, security and identity."

Murray thanked the sisters for their "mustard-seed responses," the "conversations of hope and faith" they have had with victims.

"We are disciples of hope, knowing that we can break through wherever there is despair and discouragement and bring life and light to a new future."

A few years ago, "we did not identify ourselves as Talitha Kum," Bottani told GSR.

"In the beginning, Talitha Kum was something external in Rome, and we were not clear what it was. But now, Talitha Kum is an umbrella," she said, calling it a "unity in the Spirit, unity in the vision, and unity in collaboration."

"We are united in our priorities," she said.

On Sept. 25, day four of the assembly, Bottani shared a report of the work Talitha Kum has done since 2016, when the international coordination committee first met.

Those priorities included promoting networking at Talitha Kum's regional and continental levels as well as with governments and nongovernmental organizations. The network also established the International Day of Prayer and Awareness Against Human Trafficking in 2015, to be celebrated each year Feb. 8, also the feast day of St. Josephine Bakhita. (The day of prayer, as well as this year's Nuns Healing Hearts campaign, touch on both networking and increasing visibility of human trafficking — another priority.)

In that time, Bottani also collected data from all the networks, culminating in a Talitha Kum database of partnerships, statistics, best practices and more by 2018. Additionally, the network prioritized formation for both its existing networks and developing ones, with the first training of Talitha Kum leaders done in 2018 and 2019 in partnership with the Pontifical University Antonianum, with a second session in the works.

Since Bottani became international coordinator in 2015, the number of national networks has grown from 31 to 44.

"We don't have a model to reproduce because every network will find the best way to organize themselves according to the local reality," she said. "The main point is that we are grassroots."

Covering 92 countries with 44 national networks, eight regional networks, and three continental teams, Talitha Kum has reached 15,500 survivors and involved 235,000 people in prevention activities, the network says. And its reach continues to expand, with trainings and workshops sprouting in countries that are joining the Talitha Kum umbrella.

"We say yes to become part of this body of Christ," Bottani said during her report. "And we say yes to suffer with the marginalized. ... Talitha Kum is not an angel; we are sisters and brothers. This is the most important point. We know that to make a difference has a [price] to be paid, and we have to be willing to strengthen one another to be faithful when we say yes to this mission." 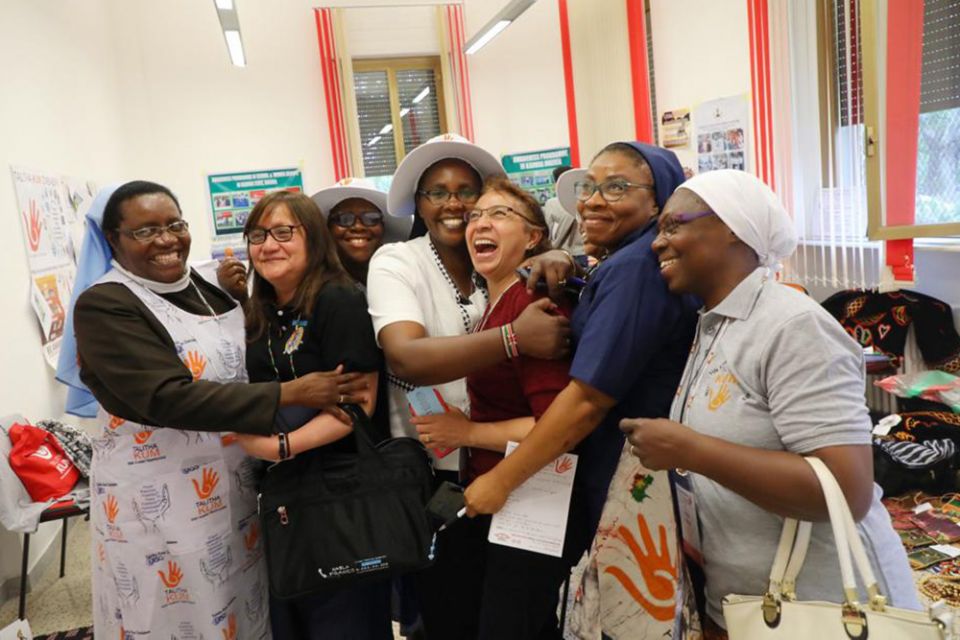 Many of the sisters involved in Talitha Kum met for the first time at the Sept. 21-27 international gathering. Women religious came to Rome from 48 countries. (Courtesy of Talitha Kum)

In addition to celebrating 10 years of Talitha Kum and evaluating their progress since 2016, Talitha Kum International defined three new areas of focus for the 2020-2025 term in a final statement, with structural injustice at the heart of all three:

1. "The power deferential between men and women in all sectors: economic, social, familial, political, cultural and religious."

Though women and girls constitute 72% of those exploited through trafficking (including sexual and labor exploitation, as well as illegal organ removal), that number rises within sex trafficking, the statement says, citing the United Nations Office on Drugs and Crimes.

Talitha Kum challenges the church to be an example to society by promoting the role of women in all sectors "to transform the culture of domination and to support the networks of Talitha Kum in their diocese and local communities. We call on governments around the world to ensure that law and policy promotes and protects the dignity and rights of women and girls."

2. "The dominant model of neoliberal development and unfettered capitalism creates situations of vulnerability that are exploited by recruiters, traffickers, employers and buyers."

Sisters call on the church "to continue to use Catholic Social Teaching to critique social structures and promote economic and social justice." They also call on governments "to adopt just alternatives to the neoliberal model of development; to implement anti-trafficking laws; and allocate more funding for the support of long-term programs to prevent human trafficking" as well as assisting the reintegration of victims into society. Such programs should incorporate input from survivors and networks like Talitha Kum, the statement said.

3. "Unjust and inadequate immigration law and policy coupled with forced migration and displacement puts people at greater risk of being trafficked."

"We call on all Catholics and people of good will to take prophetic action consistent with Pope Francis' call to pray for, welcome, protect, promote, and integrate migrants, refugees, and internally displaced people in order to prevent them from falling into the hands of traffickers," the statement said.

The network also challenges governments to implement border policies that prevent human trafficking, denouncing laws "rooted in a culture of racism and xenophobia which deny the basic human rights of people on the move" as well as "dehumanizing political rhetoric" and the “harsh immigration policy that drives victims of human trafficking into the shadows."

The sisters committed themselves to work across borders through networks and to use their "collective voice to engage government officials to promote and enforce just immigration laws and policies."

In addition to the three priorities focused on structural reform, Talitha Kum will also spend the next five years focusing on improving networking, communication and formation resources as well as increasing work in education and prevention, survivor services, advocacy, and growing the network, primarily in Africa and Asia.

"Together, we will create a future filled with prophetic hope by working together, forming a network of compassion and grace," the final statement said.

In a private audience Sept. 26, Pope Francis praised the sisters of Talitha Kum for their intercongregational and grassroots approach in their fight against human trafficking.

"While I invite you to continue this commitment, I am also making an appeal to other religious congregations — both women's and men's — for them to join this missionary work, putting people and resources at its service so that it can reach everywhere."

Talitha Kum, by uniting congregations in this shared ministry, "is an example for the whole church, also for us, men, priests, bishops. An example. Keep going like this," Francis said.

And while he said he understood that the many struggles congregations face might keep them from getting involved in this ministry, he said to "tell them the pope said that internal problems are solved by getting out onto the street, letting in fresh air."

The complexity of this issue should have all levels of the church involved, he said.

Before Francis took the time to greet each sister and guest individually, he ended his address by advising the sisters to end every day reflecting on the face of the survivors.

"This will be a beautiful prayer," he said.

Bottani said while the pope's words deeply touched her, she was also "challenged," particularly when he said their collaboration and networking is an example to the larger church.

"We know that doesn't always [look] beautiful, that it's a challenge and struggle to build up day after day with little gestures, and sometimes, it's easier to divide than create communion. But the Spirit is leading us, and that is what is important."

Q & A with Sr. Noelene Simmons, battling trafficking in Australia, a 'destination country'

Tourists must blow whistle on trafficking during Olympics, religious say