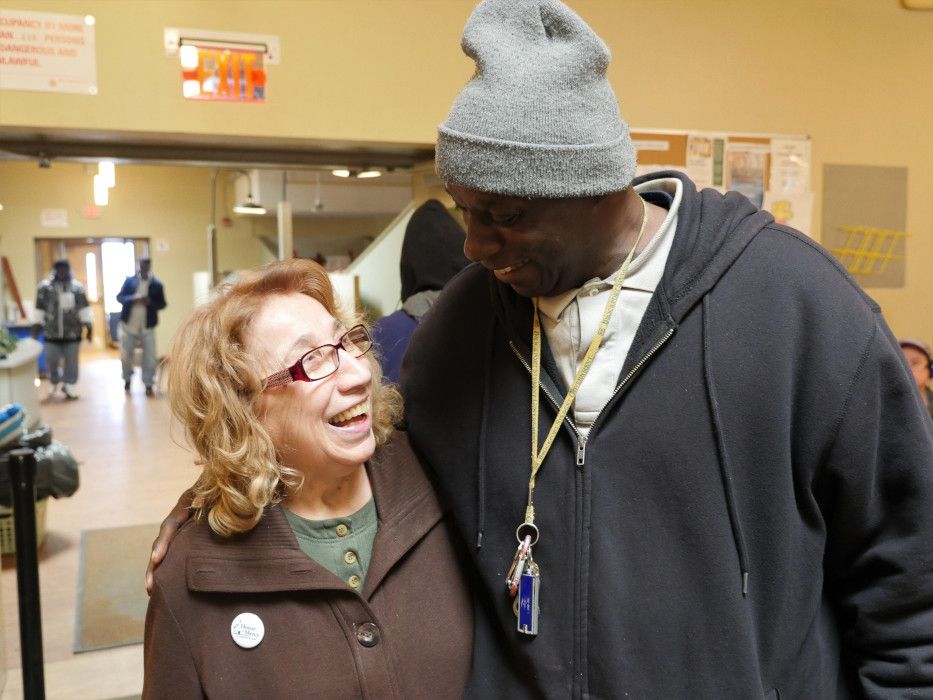 Sister Grace Miller of Rochester, N.Y., is seen with a homeless person at the House of Mercy in this undated photo. The 84-year-old sister started the homeless shelter more than 30 years ago. (CNS/courtesy House of Mercy)

Washington — The key to sheltering in place is having a place to go.

That has been the driving force behind Mercy Sister Grace Miller's homeless ministry in Rochester, New York, long before the coronavirus pandemic. But these days, more people are knocking at her shelter's doors even though many of its outreach programs have been temporarily put on hold.

The House of Mercy shelter she started in 1985 has always been open 24 hours a day, seven days a week, but now it is open only at night. Because of pandemic restrictions, it also had to discontinue its daytime soup kitchen, food pantry and drop-in program, volunteer groups and events, and the acceptance and distribution of donations.

"We will, of course, stay open and continue to serve those in our community," an announcement on the shelter's website says.

Or as Miller, the shelter's 84-year-old director and fearless advocate for the city's homeless, put it: "When they come here, they know we will take care of them."

Finding ways to provide shelter is nothing new to the Mercy sister described as both the city's Mother Teresa or Dorothy Day. She not only makes sure those in need get basic immediate help of food, clothing and a place to sleep, but she also works tirelessly to see them get on their feet with jobs or their own housing and helps them advocate for themselves.

Miller, described as "Amazing Grace" in an upcoming book about her written by a volunteer staff member, also sees to it that those who die in poverty get proper burials.

She was initially a teacher who was sent to Rochester by her order to help in urban ministry after race riots in the city. As she puts it, she became involved in a ministry to the homeless by something that happened right in front of her.

In a May 4 interview with Catholic News Service, she recounted how she saw a homeless man outside on a cold night in the 1980s. Afraid he would freeze to death, she brought him and two others, who were also outside, into her car. After driving them to different locations, hoping someone would take them in, she was repeatedly told there was no room.

"I'm not leaving unless you take them," she said at one place.

She eventually found shelter for the three men in two different church basements that were offering temporary winter shelter, but the experience struck her with an urgency that there "needed to be a place in Rochester 24-7" for people with nowhere to go.

Without the money to get this going herself, she got financial backing from her order and opened the first House of Mercy in 1985 named after the homes of shelter in Dublin in the 1800s started by Sr. Catherine McAuley, foundress of the Sisters of Mercy.

Rochester's House of Mercy, at its start and now, has been a place not just for shelter for counseling, prayers and the chance to find jobs or housing. It grew from its initial home to a much larger location in 2018 that also includes a drop-in center that serves about 4,000 people a month. Since 2002, it has had an independent board and is financially supported by volunteer donations and state and city support.

In recent months, in order to maintain social distancing, the shelter's 90 residents are divided between the home and an emptied nearby hotel.

Miller has help from Mercy Sister Rita Lewis, a 63-year-old nurse, who came on board in 1987 to help with the House of Mercy, and the two continue their work in trying times without complaints or fears about their own health.

Reached at the end of a long day, Miller, who turns 85 in July, did not elaborate on her daily challenges but said that Lewis, guest coordinator at the shelter, makes sure people are taking care of themselves, reminds them to wear masks and helps with the distribution of food to go.

"Thank God, everyone is OK," she said.

She said a key part of the ministry has always been accepting people where they are and also providing spiritual care. The shelter has a Bible study and used to have Sunday liturgies, with a gospel choir, prior to having to follow social-distancing guidelines.

For now, "I pray with them every night and they find that consoling," she said.

Lewis, who had volunteered at the House of Mercy before she saw Miller's request for help in a newsletter, said: "I knew that's where I needed to be even though I wasn't sure what I was going to be doing."

And decades later, and in the midst of a global pandemic, Lewis said it has been "heartwarming to see people joining us to care for the poor. People continue to come and volunteer no matter the risk."

"There's just a sense of joy in this difficult time of being with people who want to care for each other; it lifts me up. It amazes me the love the poor have for each other to help in whatever way they can."

Q & A with Sr. Assumpta Nabawanuka on battling COVID-19 early in the pandemic