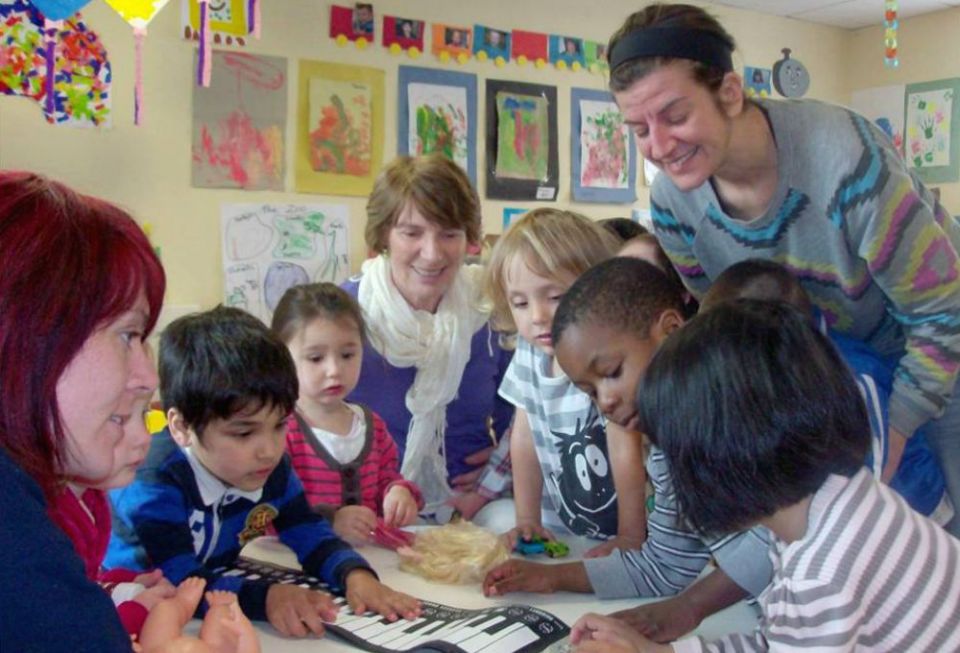 Editor's note: Today, Global Sisters Report launches a new blog, Monday Starter, a weekly feature from GSR staff writers that rounds up news from or about women religious that you may otherwise have missed.

The International Union of Superiors General, the global alliance representing approximately 600,000 sisters, continues its efforts to raise visibility for sisters and empower women.

In September 2020, UISG launched a campaign with the hashtag #YouAreMySister to highlight global challenges that may not get adequate attention in a coordinated way at national and global levels. These include increases in human trafficking and hunger caused by the COVID-19 pandemic.

Now, add another effort: #SistersEmpoweringWomen asks sisters and others to share photos of women "who inspire, through their commitment, and promote the values of fraternity and social friendship."

Participants are asked to post a photo to social with the official hashtag, #SistersEmpoweringWomen, and "tag the friend or personality motivating the reason for the choice," UISG said in a March 23 announcement. The initiative began March 26. 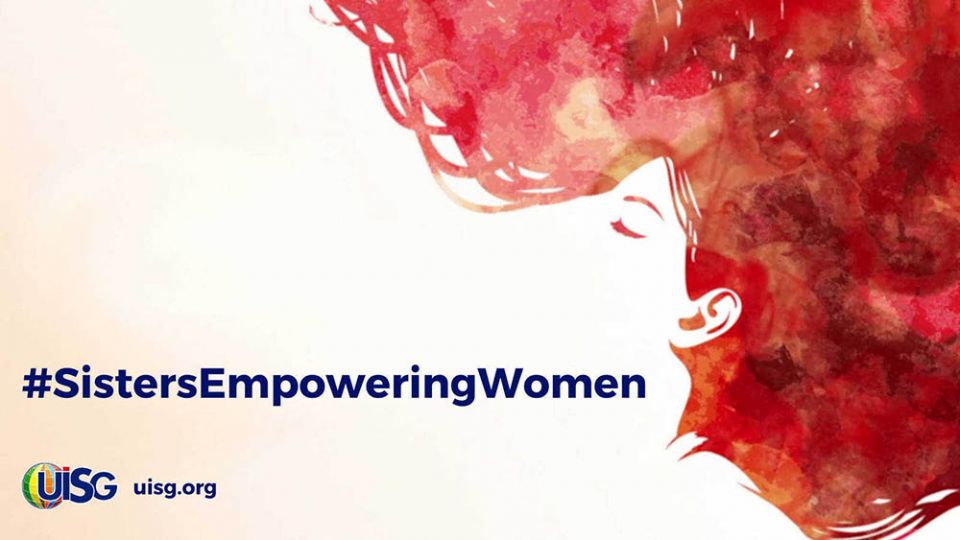 The logo for the International Union of Superiors General's #SistersEmpoweringWomen initiative, which runs through July 15 (Courtesy of UISG)

"By using their Twitter and Instagram accounts and the hashtag #SistersEmpoweringWomen, women everywhere, and sisters in particular, will be able to share photos of female experiences that promote, enhance, and give voice to the hopes of other women," the announcement said. "Participation is easy. Just post on your profile a photo that shows your mission for and with women or post photos of other women who inspire and promote the values of fraternity and social friendship."

The most significant photos will be collected in an online album and will also be used in official communications, UISG said. The initiative runs through July 15.

Sisters' anti-trafficking work is well known to Global Sisters Report readers, as is Talitha Kum's ministry. But as GSR editor Gail DeGeorge says, "It's good to acknowledge that those efforts are being recognized by national media."

Sophia Housing in Dublin, which was founded in 1999 by Daughter of Wisdom Sr. Jean Quinn, now the executive director of UNANIMA International, has been awarded the Irish Public Sector Award for Excellence in Housing Services Supporting Families 2021.

The organization is "a collaborative venture drawing support from a number of religious orders in Ireland," noted an October 2020 GSR story on homelessness in Ireland.

Sophia was also featured in a recent special edition of Ireland's The Public Sector Magazine, which focuses on social housing. Read the article here.

The sisters say the action is an example of "persistent harassment" and an ongoing "barrage of malicious allegations" that the grassroots social justice group may be involved in "terrorism financing," the group wrote in the Philippine Daily Inquirer on March 17.

"We have been living out our mission to collectively witness and act as Christ's disciples with the rural poor, specifically with poor farmers, agricultural workers, indigenous peoples, and fisherfolk," said the statement, which was signed by eight sisters from four congregations and a lay representative of the organization.

"We vehemently deny any involvement in any form of financing terrorist persons and/or organizations. We reiterate our position that donations and funding received by RMP are used to implement projects and programs to help the poor, by providing rural communities the help and services they deserve and that the government refuses to provide," the statement said.

The attacks against the Rural Missionaries of the Philippines and its members "are inevitably connected to our work with the poor, marginalized, and oppressed sectors in society," the sisters said.

The statement said the sisters fear that under a new anti-terrorism law implemented by the government of President Rodrigo Duterte, "helping the poor and living out concretely our faith imperative and following the church mandate to build the church of the poor will put our liberty and life at risk."

The sisters say freezing the accounts is part of an ongoing harassment against the organization in recent years.

In a November 2020 report, the Philippines-based investigative news site Rappler reported that the group "has suffered the financial brunt of the Duterte government's intense campaign against communism. Its assets were frozen even before the enactment of the feared anti-terror law." 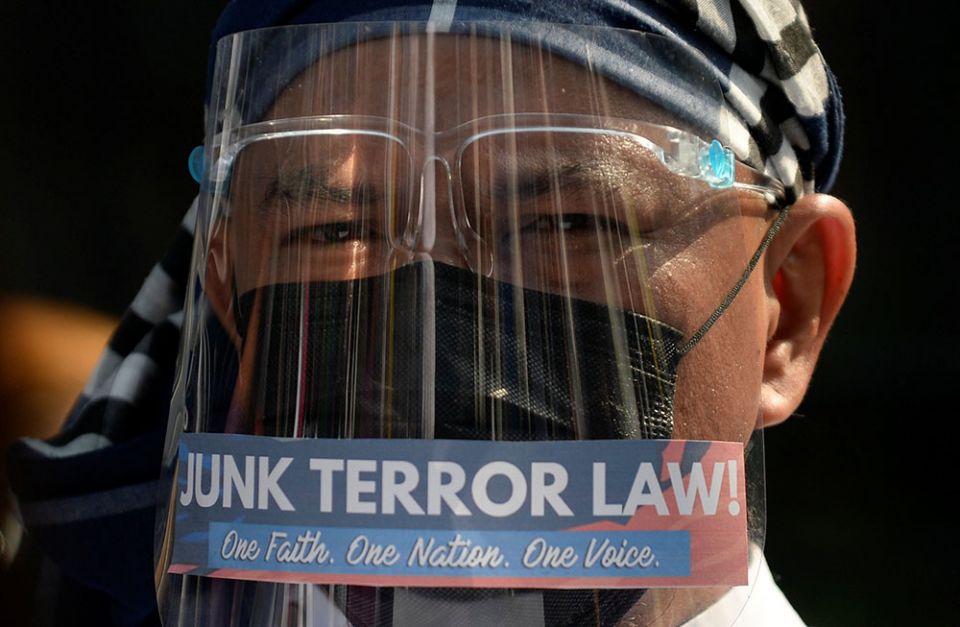 A priest wears a protective mask and face shield during a Feb. 2 protest outside a church in Manila, Philippines, before the start of the hearing of oral arguments on the anti-terrorism law. (CNS/Reuters/Lisa Marie David)

Rappler reported that the sisters' lawyers, the Public Interest Law Center, told the Philippine Supreme Court in a Nov. 16 court filing "that if the law were to be upheld, the nuns would most definitely be designated as terrorists and subjected to more sanctions."

The attorneys added: "Many of those who dare [speak] out against the government or even just on social issues are vilified in public."

In their statement, the sisters warned against "red-tagging" church workers and said a national anti-terrorist task force "is inimical to democracy and in its most extreme can lead to warrantless arrests, detention without charges, torture, enforced disappearances, and extrajudicial killings."

(The charge of "red-tagging" against the Rural Missionaries of the Philippines is nothing new; GSR reported on it in April 2019.)

A number of prominent human rights organizations, including New York-based Human Rights Watch, have criticized the Duterte government's human rights record. But Duterte has been unapologetic about his approach. On March 5, he ordered the Philippine military and police forces to kill and "finish off" all communist rebels in the country, Al Jazeera reported.

"Forget about human rights. That's my order. I'm willing to go to jail, that's not a problem," Duterte said, adding, "I do not have any qualms about doing the things that I have to do."