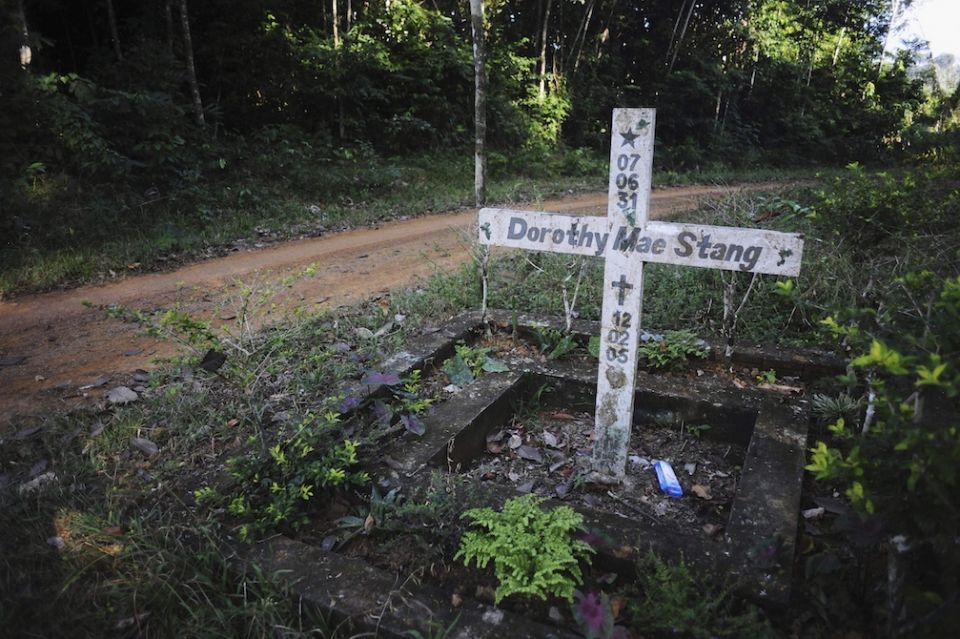 A wooden cross marks the spot in June 2012 where U.S. Sr. Dorothy Stang, a member of the Sisters of Notre Dame de Namur, was killed Feb. 12, 2005, on an isolated road near the Brazilian town of Anapu. (CNS/Reuters/Lunae Parracho)

The Sisters of Notre Dame de Namur have announced that a newly discovered screech owl in the Amazon rainforest has been named after the martyred Sr. Dorothy Stang.

Stang, a longtime champion of farmers' land rights in rural Brazil, was assassinated in 2005 in the northern Brazilian state of Pará in the Amazon Basin. A native of the United States, Stang became a naturalized citizen of Brazil. Her death led to the creation of a reserve of more than 1 million hectares devoted to sustainable use of rainforest land by the local population, whose rights she championed.

Earlier this year, researchers from Brazil, Finland and the United States discovered, or "described," two new species of screech owl in Brazil, and one of those species, the Xingu screech owl, received a scientific name in honor of Stang. The name, Megascops stangiae, honors Stang's work "on behalf of poor farmers and the environment in the Brazilian Amazon region," the congregation's Ohio Province said in a statement. 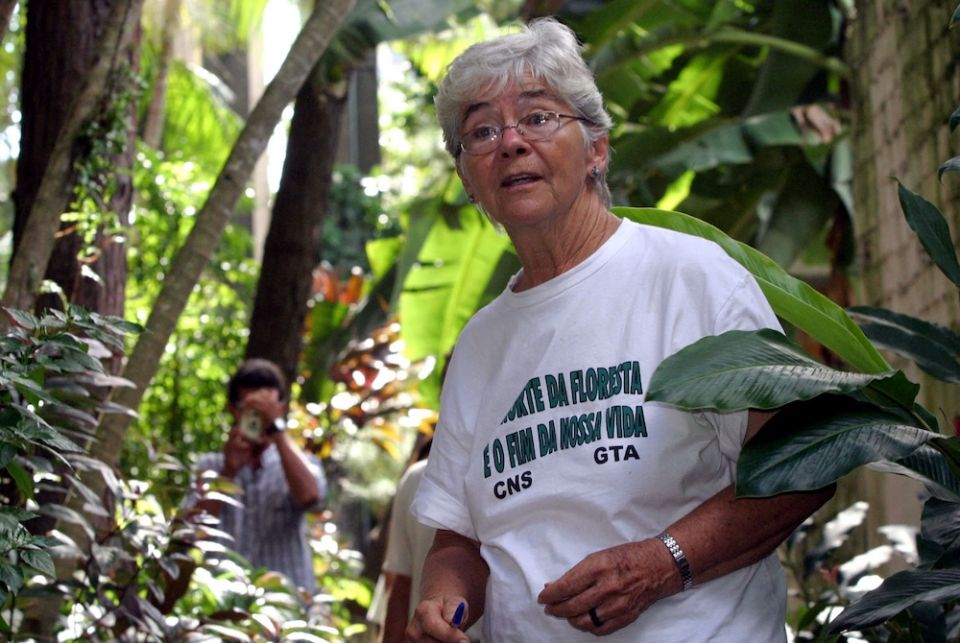 U.S.-born Sr. Dorothy Stang, a member of the Sisters of Notre Dame de Namur, is pictured in a 2004 file photo in Belem, northern Brazil. (CNS/Reuters)

The common name, Xingu screech owl, is a reference to an area where the new species is found, the statement said. That area is located between the Tapajós and Xingu rivers, the area where Stang worked and was killed.

Congregational leader Sr. Teresita Weind said biologist Therese Catanach, a member of the research team, contacted the congregation about naming the owl for Stang, as the team was moved by Stang's life story.

"Sister Dorothy's murder left a big impression on me, especially when I started research in tropical forests," Catanach said.

Two other researchers, Brazilian biologists Sidnei Dantas and Alex Alexio, discussed what to name the owl. Dantas had visited Stang's gravesite, and Alexio suggested one of the owls be named after Stang as "a way to raise awareness about the Amazon, being the 'lungs of the planet,' and home of tropical medicinal plants, birds, animals, and human lives," the congregation said.

A ministry of the Congregation of Our Lady of Charity of the Good Shepherd in the Democratic Republic of the Congo recently won the Thomson Reuters Foundation's Stop Slavery Award. The award is one of several awards by the foundation that recognize companies and grassroots organizations that have "an impact in the fight to end modern slavery and human trafficking."

Bon Pasteur Kolwezi received the award in a ceremony in February. In accepting the honors, Sr. Jane Wainoi Kabui, the program's director, noted the role of the organization's staff, fellow congregational members and the Good Shepherd International Foundation and their "unremitting support to our communities and shared commitment to fight modern slavery in the Democratic Republic of the Congo."

The ministry has its roots in an initiative that began in 2012, when the congregation's Province of Eastern Central Africa established a community development program "to combat child labor, human rights violations, and modern slavery in the copper and cobalt mining region around the city of Kolwezi in the DRC," the congregation said in an announcement of the award.

The ministry now works in eight communities where cobalt mining is dominant. 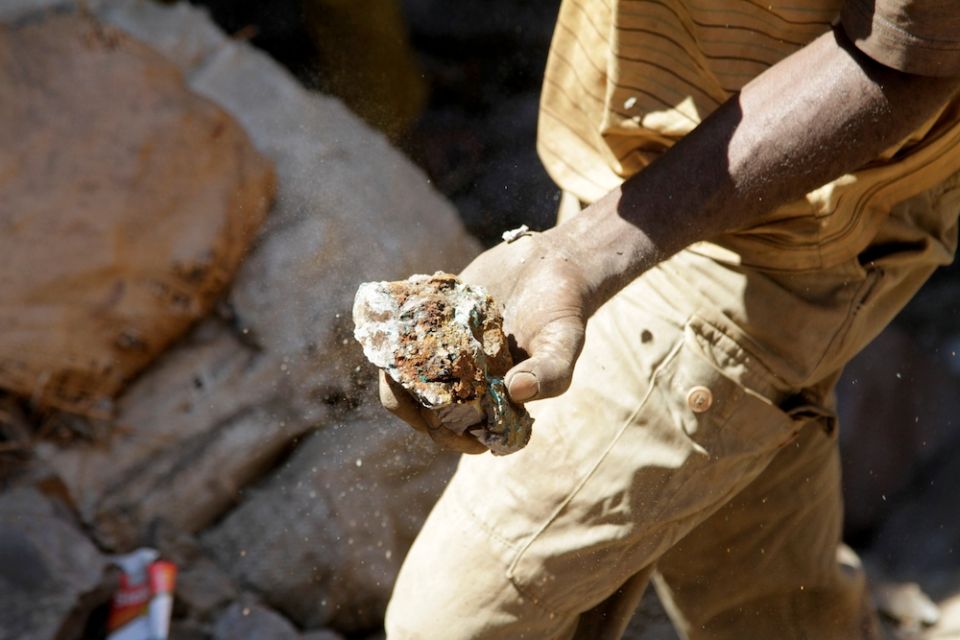 "It has helped more than 3,000 children quit the mines and attend school, 500 families to secure alternative and sustainable livelihoods, 300 girls and women to gain new skills and make a decent living away from the mines, and educated more than 20,000 people on how to campaign for better working conditions," the congregation said.

The project inaugurated a new Bon Pasteur Center in Kolwezi in 2019 in an initiative that includes 14 classrooms to instruct roughly 1,000 children whose families live in the nearby mining communities. The demand for that schooling has been so great, Kabui said, that "the biggest challenge has been that the center can only accommodate a given number of children, and so sometimes we have to turn children away."

Advocacy is also part of the ministry's work, and Kabui said in the congregational announcement that she hopes more people will "become conscious of the dehumanizing conditions the artisanal miners have to go through."

A new documentary film gaining attention focuses on the work of Águilas del Desierto (Eagles of the Desert), a search-and-rescue group at the U.S.-Mexico border. Felician Sisters work with the group by making crosses that search teams leave with the bodies they find in the harsh desert border area.

The film recently won the Documentary Shorts Jury Award during the March 16-20 South by Southwest (SXSW) Film Festival, among other awards. It was recently profiled in The New Yorker and can be viewed on YouTube:

Get ready, food lovers! The California-based Sisters of St. Joseph of Orange are set to release a new cookbook, including favorite recipes from the congregational members and their friends. The book will be released in the next few weeks. Follow the community on Instagram to stay up to date on its publication.

A post shared by Sisters of St Joseph of Orange (@csjorange)

As Global Sisters Report marks its seventh anniversary this week, we want to thank our readers for their support and share a new video that tells more of our story. Since our launch on April 22, 2014, GSR has been driven to fulfill its mission to be a dynamic online community that reports on and gives voice to women religious around the world.

"We've grown into an award-winning online publication with more than 90,000 monthly readers and 3.5 million visitors since our launch," GSR editor Gail DeGeorge noted. "More than 340 sisters from at least 45 countries have written for GSR. Thanks to Sr. Judy Zielinski and NewGroup Media for their help in producing this video and our 'Sisters in Ministry: The Gospel in Action' video and its Spanish-language version."

She added: "None of this would be possible without the support of the Conrad N. Hilton Foundation's Catholic Sisters Initiative along with the Thomas and Dorothy Leavey Foundation and the GHR Foundation, which supported our GSR in the Classroom project. Thanks to you, our readers, and, as always, to Catholic sisters for their inspiration."