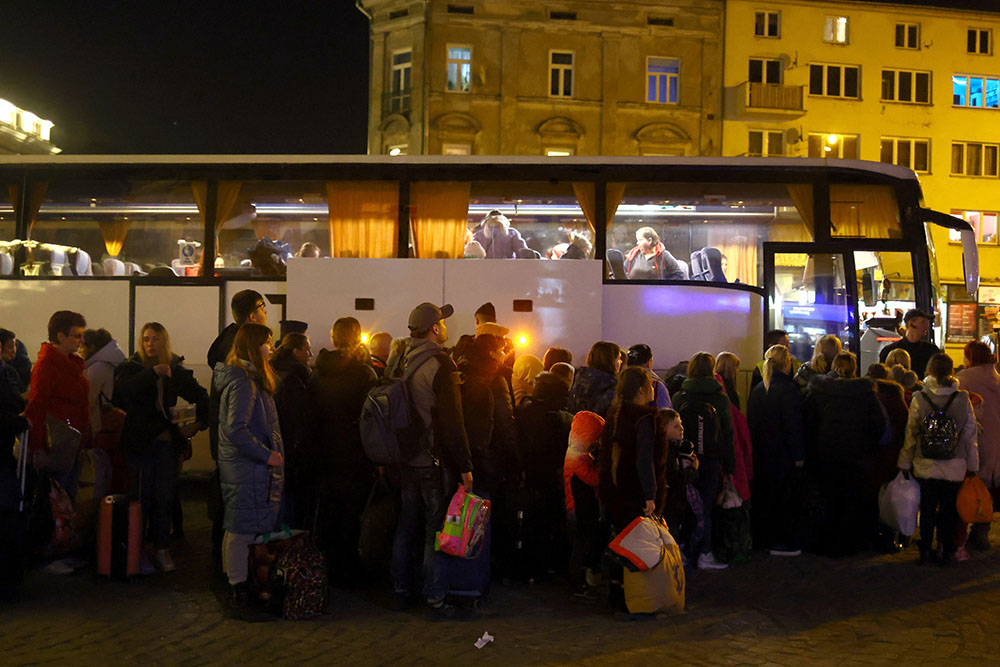 Ukrainian refugees in Przemysl, Poland, wait to board a bus to take them to a temporary shelter March 23, after fleeing the Russian invasion. (CNS/Reuters/Hannah McKay)

Sr. Imelda Poole has been fighting human trafficking for years and is now increasingly worried about the situation in Ukraine.

"There has been an explosion of child trafficking in the world in recent years because of increasing poverty," she told GSR "And now, the risks are enormous in Ukraine because war situations make it easier for international and local gangs to find prey."

Poole is a member of the Institute of the Blessed Virgin Mary (Loreto Sisters) and president of Religious in Europe Networking Against Trafficking and Exploitation (RENATE), a nongovernmental organization that combats human trafficking in 31 European countries.

Millions of Ukrainians have left their homes, fleeing bombings and destruction. After a month of fighting, about 3 million of them have crossed the borders, mostly into Poland. About as many have been displaced within their country, going west where the fighting has been less intense. Thousands are waiting in underground shelters, hoping for a ride to safety as soon as possible. 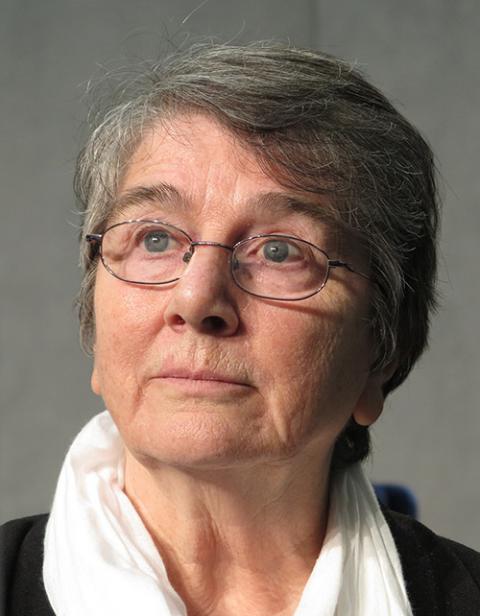 "The situation is dire in shelters. Food is scarce, Hygiene is very bad. Such chaos is welcomed by gangs of traffickers, who prey on the most vulnerable: isolated children or young people," Poole said.

It did not take long for gangs, local as well as international, to mingle in the crowd and offer false promises of help. Traffickers know refugees are desperate to go to a safer place. They are quick to offer a ride over the border to people who are desperate to leave. This is where danger lies.

Soon after the war broke out, humanitarian aid agencies started to distribute leaflets to refugees gathered in shelters, to warn them about human trafficking. "We have printed and distributed leaflets written both in English and in Ukrainian, so humanitarian workers know what is written on them as well," Poole said.

The paper tells refugees what to do before agreeing to a ride to the border with Poland or Romania, the two main countries where Ukrainians seek refuge, along with Hungary and Slovakia.

"Never hand out your passport to someone who promises you a ride. Take a picture of the plate of the van you get on and tell someone that you are going in it and where you are going" are some of the tips printed on the leaflets.

If offered accommodations, make sure to tell someone you know where you are. "We try to give cellphones to the ones who do not have one, so they can stay in contact with their relatives," Poole added.

She is coordinating efforts to help refugees, working closely with other helpers within Ukraine, priests and sisters with whom she is in contact. She is based in Tirana, Albania, where she has been fighting human trafficking for the past fifteen years.

Related: Combatting human trafficking in Albania and across European borders

These leaflets are like an "A to Z guide for refugees of how to protect themselves from transnational gangs."

She also said anyone traveling should registered with the authorities when possible. "The police tell humanitarian agencies in Ukraine that they are very aware of the presence of international gangs of traffickers. They say they patrol the routes taken by refugees to try to prevent criminals from preying on vulnerable people."

Aid workers also watch out for people acting in a suspicious manner and report them to the police.

Poole has a long experience in dealing with human trafficking.

"Drug trafficking doesn't bring as much money as it used to. Arms trafficking is also not so lucrative anymore, so traffickers are now focusing on human trafficking," she said.

"Children are bought online" she added, "they become sex slaves or forced to work for free."

Even very young children are at risk: "Traffic starts with small children," she said, though "anyone can become a victim of it, not only young boys and girls."

Related: Q & A with Sr. Imelda Poole, networking with European religious against trafficking

"The world is demanding cheap labor, cheap sex. Traffickers know that wars give them opportunities. Their only aim is greed; they have absolutely no ethics. And criminals often get away with it," she said.

Caritas Internationalis and other humanitarian groups present in Ukraine have joined forces to help refugees. "Right now, there is a very high risk that people might become a human slave," Vladyslav Shelokov, Caritas Ukraine's resource mobilization director, said in an interview with Vatican News.

The situation in Ukraine is chaotic, and UNICEF, the United Nations Children Fund, is also warning about people eager to help, saying that rules have to be followed to protect children.

"We cannot let people, even of goodwill, take children without any protocol. Children are exposed to sexual trafficking or to some forms of slavery, even to organ trafficking," Philippe Cori, from the UNICEF bureau for Europe and Central Asia, said in an interview with the French magazine Elle.

Since the German border is only a six-hour drive (600 km) from Ukraine, some West Europeans have driven to the border to offer help. This may be generous but also dangerous.

"In Poland, a lot of associations unknown to the authorities say they can take children with them to a safer place. This cannot be done," explained Alice Barbe, a spokeswoman from the Corridor Citoyen, an association created on the first day of the invasion of Ukraine to ensure safe passage to people who want to leave the country and go to France.

"There is real chaos in humanitarian refugee centers, with volunteers who are not under any control. They just wear a badge and a yellow vest and they are seen as volunteers. This is irresponsible," Barbe said in the same story in Elle.

Poole also insists on the need for volunteers to be qualified. "People who help might not be aware of the trauma refugees suffer and of the impact of fleeing a war," she said. "What is needed at this time is a listening ear for these refugees who have suffered so much."

Her congregation, the Institute of the Blessed Virgin Mary, is ready to take in some refugees, in close cooperation with police, social workers and psychologists to make sure they are properly cared for.