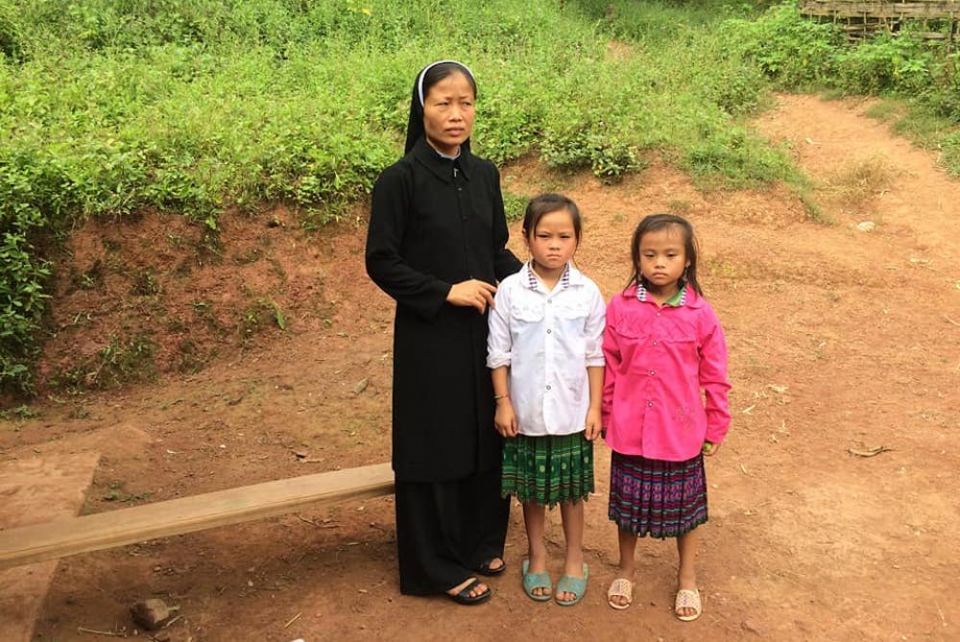 Yen Bai City, Vietnam — The Vietnamese government lifted coronavirus lockdown restrictions May 8 after it basically controlled the deadly pandemic. Border gates remain closed, and international flights have not been resumed.

As of June 8, the Southeast Asian country has gone 51 days without community transmission of COVID-19. It has reported 332 cases without any deaths.

Since the pandemic hit Vietnam in February, the country's 97 million people have been experiencing a severe economic downturn.

So far, many people have not received the money because of complicated procedures they have to go through.

The livelihoods of ethnic groups in Vietnam's northwestern provinces of Lai Chau and Dien Bien have been most affected by the pandemic. People there found themselves jobless because all businesses, services and transport were shut down to curb the spread of the coronavirus. They also could not work in China, as border gates have been closed for the pandemic.

In addition, floods caused by unseasonal heavy rain with hail hit the areas in April and May, destroying their houses and crops.

Many ethnic villagers lack adequate food and so they forage for vegetables and roots in forests. As a result, three children have died from eating poisonous mushrooms.

The two mountainous provinces bordering China and Laos are among the poorest in the country and home to 20 ethnic groups.

Lovers of the Holy Cross Sr. Maria Do Thi Quyen, who has worked with Hmong ethnic villagers and other ethnic groups in the provinces since 2009, talked about how COVID-19 is affecting local ethnic villagers as well as how sisters are helping them. Quyen and another sister are based in Lai Chau City.

GSR: How do the COVID-19 restrictions affect ethnic villages?

Quyen: Since the government started to implement protective measures against the COVID-19 pandemic, which broke out in the country in February, the life of local Hmong ethnic villagers who live in extreme poverty has become worse. They suffer lack of food, clothes and other basic needs, as they lost jobs.

Many could not seek manual jobs in other places in the country or in China because of the lockdown. Obviously, they illegally cross China's border and only could on average earn 6 million dong ($261) per month there.

In big families, children who live in boarding schools where they are given food by the government had to stay home, and the family consumed more food than usual. So they used up rice and corn that they harvested last year.

Recent heavy rain with hail, in addition, destroyed their houses and crops, adding to the misery of those starving villagers. Most of them live on crops.

Some villagers now are starting to grow rice on terraced fields, and after that, they will go to other places in search of work.

Can you tell the story of the children who have died from eating poisonous mushrooms?

Three hungry Hmong girls ate mushrooms containing deadly poisons they picked up away from their house. They died tragically on April 27 and 29 and May 2 after being taken to a local hospital.

Maria Hang Thi Phua, in eighth grade, and Maria Hang Thi Tang, a sixth-grader, were sisters. They were 12 and 14. The other girl was Mary Giang Thi Su, their relative. 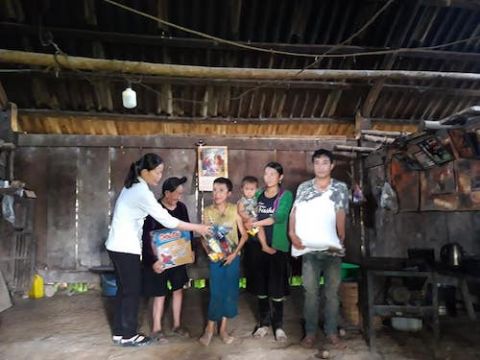 Hmong villagers receive rice, instant noodles and other food from the Lovers of the Holy Cross nuns and volunteers. (Courtesy of Sr. Maria Do Thi Quyen)

The father of Phua and Tang abuses drugs and failed to care for them while their mother moved to China and remarried. Luckily, their eldest and youngest sisters were away from home on the day they ate poisonous mushrooms.

The girls all were secondary-school students from Huoi Thung subparish at Na Co Sa 3 Commune in Dien Bien Province.

Their untimely deaths are a great loss to the local church and the local community, as they lived good lives and still studied at a school. Many children have to drop out of secondary school and work to support their families.

We were really shocked at their tragic story and cried our eyes out.

In 2015, when I worked in Dien Bien, I raised funds from benefactors and built a wood house for the sisters' family. I also offered them monthly rice until I left this area for Lai Chau Province in 2017.

I think we, local priests and religious, partly take responsibility for their deaths because of ignorance of their misery.

What have you done for the girls' relatives?

After their tragic deaths, Fr. Peter Pham Thanh Binh, head of the Committee for Ethnic Groups in Hung Hoa Diocese, and Fr. Joseph Nguyen Ngoc Ngoan, who offers pastoral care to Huoi Thung subparish, and I discussed how to help their living relatives: Mary Hang Thi Say, 16 years old, a seventh-grader who already dropped out of school, and Mary Hang Thi Chi, 8 years old, a second-grader.

We also called for benefactors to make donations to them.

We offer the two girls clothes, blankets and mosquito nets, and 30 kilograms of rice per month so that the youngest could pursue her studies. The eldest will be brought up by local lay leaders until she gets married. We also assigned a member of the subparish council to supervise and protect them.

What about other starving villagers?

Since mid-May, Sr. Teresa Phan Minh Hiep and I have provided emergency food aid for 250 Hmong families in Tan Uyen District of Lai Chau Province. Each family was given rice, instant noodles, salt and monosodium glutamate, costing 500,000 dong. Their villages are 100 kilometers away from our house, and we rode a motorbike while a truck carried food on muddy, winding and steep roads to their villages.

We had to buy the food on credit to supply the starving people in time, as some benefactors promised to donate to us.

Local villagers have not been given social welfare allowance for COVID-19 from the government yet. Families have an average of five children each. Some have 12 children.

Local villagers have had their houses, crops and cattle washed away or destroyed by floods, whirlwinds and hail in recent years. They suffer from prolonged starvation. Although local government authorities refuse to recognize Catholicism in this area, we have 300 Hmong Catholics from five villages, and the number of catechumens is on the increase every year. So we try to save them from starvation as way to prevent them from leaving for China.

Many Hmong villagers have illegally moved to China in search of work. They work on farms, carry goods and do any manual work for a living.

I see as many as 50 families from a village move to China, leaving children and elderly people at home. Many women remarry Chinese men and never return to their homes in Vietnam. Their husbands in Vietnam are bored with their wives, abandon their children, drink alcohol and abuse drugs.

We are very sad when some children tell us that their mothers have remarried in China for economic opportunities there. Recently, a child cried his eyes out after he failed to convince his mother not to go to China. 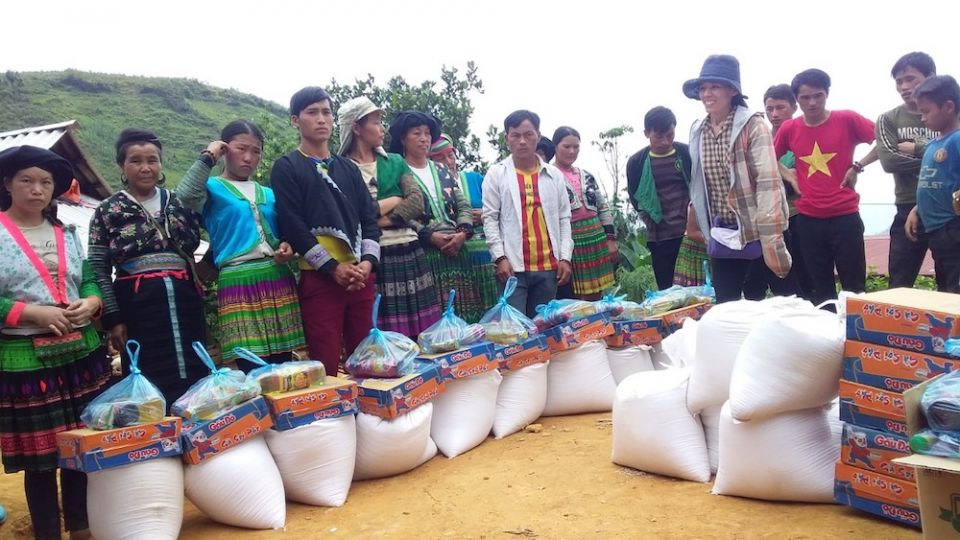 What religious activities do sisters give Hmong people?

We offer them catechism, lead Catholic associations and hold liturgical services. We also run day care centers and hostels for high school students in provinces of Lao Cai and Dien Bien. Students are given opportunities to finish high school, learn living skills and how to keep their bodies and houses clean.

We try to help them change their age-old tradition of early marriage. Dozens of students at the ages of 15 or 16 leave schools and get married each year.

We train those who are interested in vocations and send them to seminaries and convents.

Authorities in Lai Chau Province do not allow us to found nursery schools and hostels.

Q & A with Srs. Michaela Gotangco and Crescencia Lucero, fighting for justice in the Philippines