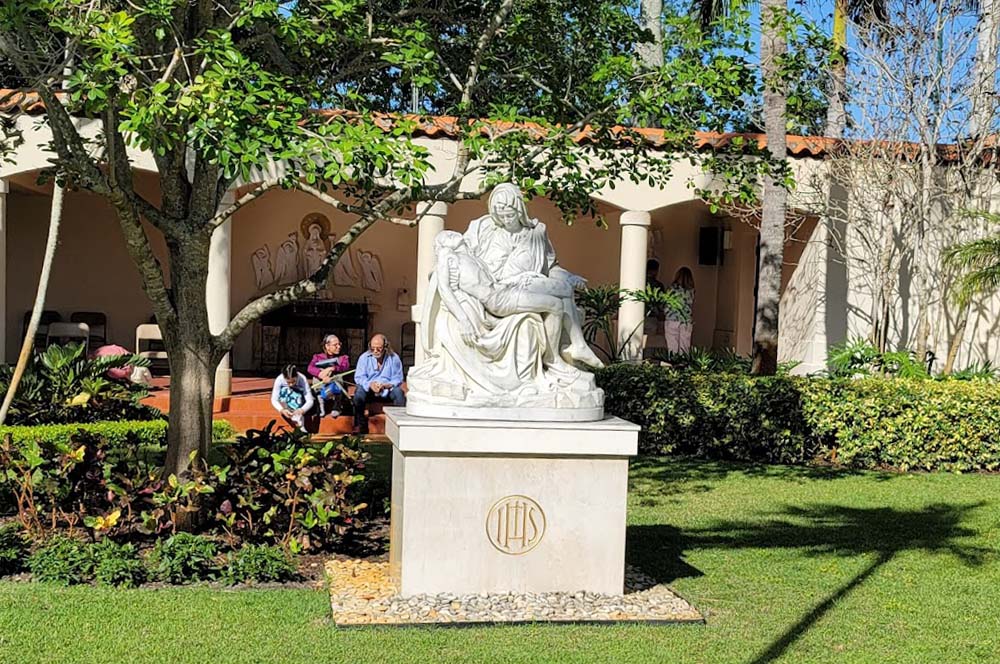 Replica of the Pietà in the courtyard of St. Christopher Church in Hobe Sound, Florida (GSR photo/Gail DeGeorge)

We enter this triduum with our hearts heavy and our souls shaken by the brutality of Russia's war against Ukraine, in which "forces of evil" are clearly at work, as Pope Francis said. We are weary and grieving three years into a pandemic caused by a virus that morphs into new variants just when we think it's been conquered. Economic collapse and protests against government corruption and mismanagement rock Sri Lanka, which is suffering shortages of food and fuel. Scarcity and dislocation afflict people in numerous other countries, from Kenya to Pakistan to Peru. Catholic Relief Services officials recently testified in front of the U.S. Congress, warning of rising global hunger.

Armed conflict, autocrats and military coups continue in a dozen or more places around the world, a sorry litany of suffering and human failure in Afghanistan, Syria, Yemen, South Sudan, Ethiopia and Myanmar, to name a few. Division and discord infect our governing bodies, our communities, our families and even our church, where we normally seek solace and spiritual nourishment. We struggle with our own personal suffering with the deaths of loved ones and illnesses and chronic conditions that affect family members and friends. And all of this takes place against the backdrop of climate change, the seemingly inexorable degradation of the planet we call home.

It can feel like we are witnesses on an endless road to Calvary.

Yet questions resonate with me from a Palm Sunday prayer gathering with Solidarity with Sisters that I participated in as we enter this sacred time: 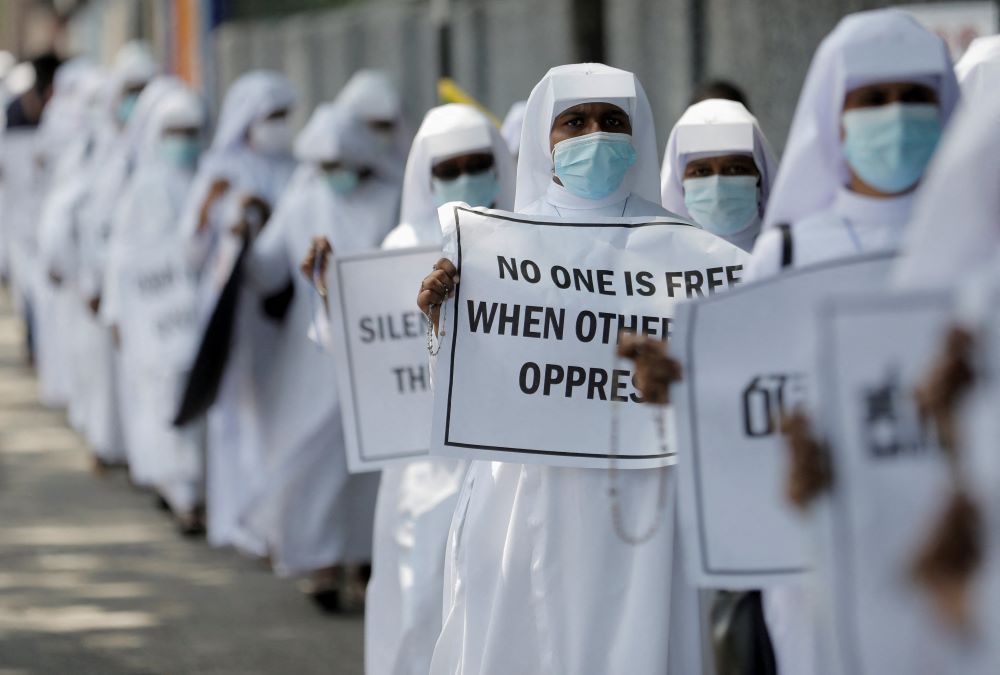 Nuns hold placards during a protest demanding Sri Lankan President Gotabaya Rajapaksa step down in Colombo April 5. Rajapaksa is trying to stabilize his government after mass protests prompted most of his Cabinet to resign. (CNS/Reuters/Dinuka Liyanawatte)

In the discussion that followed, some participants cited the strength and courage of the women in the Passion story, the daughters of Jerusalem who wept as they witnessed Jesus' suffering, as well as the pain endured by Jesus' mother, Mary, and the other women who stayed at the foot of the cross after the men had fled. I meditated on the endurance of Mary Magdalene and the other women who probably accompanied her, who waited that agonizing day before going to the tomb and becoming the first witnesses to the Resurrection.

Others said they draw on examples of Catholic sisters, particularly in our times. We at Global Sisters Report can cite many such inspiring stories.

Dispatches we are publishing from the Sisters of the Order of St. Basil the Great demonstrate the courage of sisters who, after traveling to countries like Portugal and Poland, have returned to Ukraine to help serve refugees. Sisters in western Ukraine and surrounding countries of Poland and Romania show such compassion and care in housing refugees, tending as they can to their emotional and psychological wounds. Often, the sisters do so simply with their presence, respecting the needs of those who are traumatized for space and silence — and a listening ear when they need to talk. The sisters remain vigilant against refugees at risk of trafficking, the scourge of modern-day slavery. Sisters and volunteers from Poland and Romania cross into Ukraine to deliver supplies, donations from around the world. 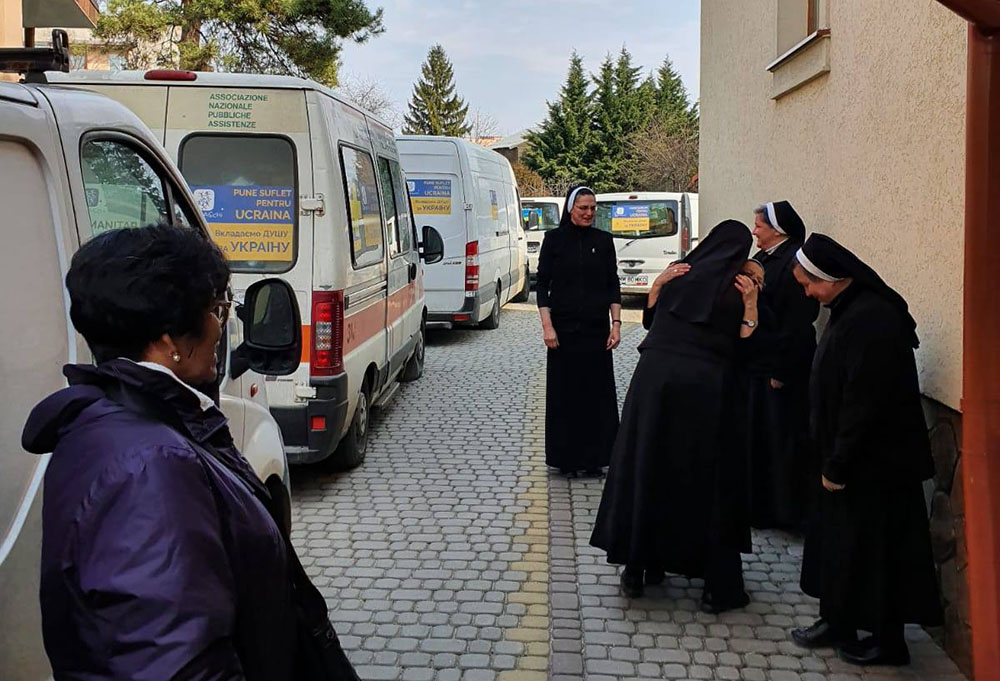 These examples extend beyond Ukraine. The image of St. Francis Xavier Sr. Ann Rose Nu Tawng of Myanmar, kneeling in front of police on Feb. 28, 2021, begging them not to shoot protesters, went viral worldwide and became a global icon of peace and courage. Sisters in Ethiopia ministered in the Tigray region even as threats grew more dire.

Don't think because sisters pray for courage, strength and protection that they are superhuman or somehow devoid of fear. As reports mounted of the brutality of Russian troops inflicted on Ukraine civilians — women, children and the elderly — some sisters shared their reality.

"We hear stories of such atrocities almost daily, and we too live in fear and anxiety," said Sr. Ligi Payyappilly, who shelters around 75 women and children plus 50 elderly people at her convent at Mukachevo in western Ukraine.

The 48-year-old superior of the Sisters of St. Joseph of Saint-Marc convent recounted how the Russian soldiers have now started attacking camps and government shelter homes for refugees in addition to residential homes.

"They want food and sex, and they are hungry, angry and frustrated," Payyappilly told Matters India, Global Sisters Report's partner in India.

But the sisters stay — and serve — anyway.

To prepare myself for Holy Week, I did one other thing on Palm Sunday. For the first time since the pandemic, I went to Mass, to St. Christopher's in Hobe Sound, Florida, a lovely little church my mom and I would go to.

After Mass, I lingered in the courtyard, lighting candles at shrines of various saints in honor of her, my dad and other family members and friends who have passed on and for the millions who have died in the pandemic and in these brutal wars. I prayed that in some small way that I be able to help and that I would not give in to despair and cynicism, which are the toxic byproducts of tumultuous times.

As I stopped in front of a replica of the Pietà, I prayed for the people in Ukraine and particularly for the sisters, for their protection and continued strength and courage. I prayed for them and for sisters in Poland, Romania, South Sudan and around the world who are doing what they can to counter the forces of evil with love. In so doing, they serve as examples to us all.

From the live blog of the Sisters of the order of St. Basil the Great:

We also add a story from yesterday of one of our Sisters who work with refugees.

"Here it is, our medicine," said a woman from Zaporizhya as I passed her by. Those who were at the Liturgy yesterday (Palm Sunday) approached and thanked for the prayer. Some asked them to record their prayers on audio. When I returned from my ministry for refugees today, I thought about all our Sisters in Ukraine and abroad, who with their help are medicine for each other and for others ...

We can be and so many times we are the healing presence of God for others! Dear Sisters, let us continue to be a praying, healing and life-giving presence.