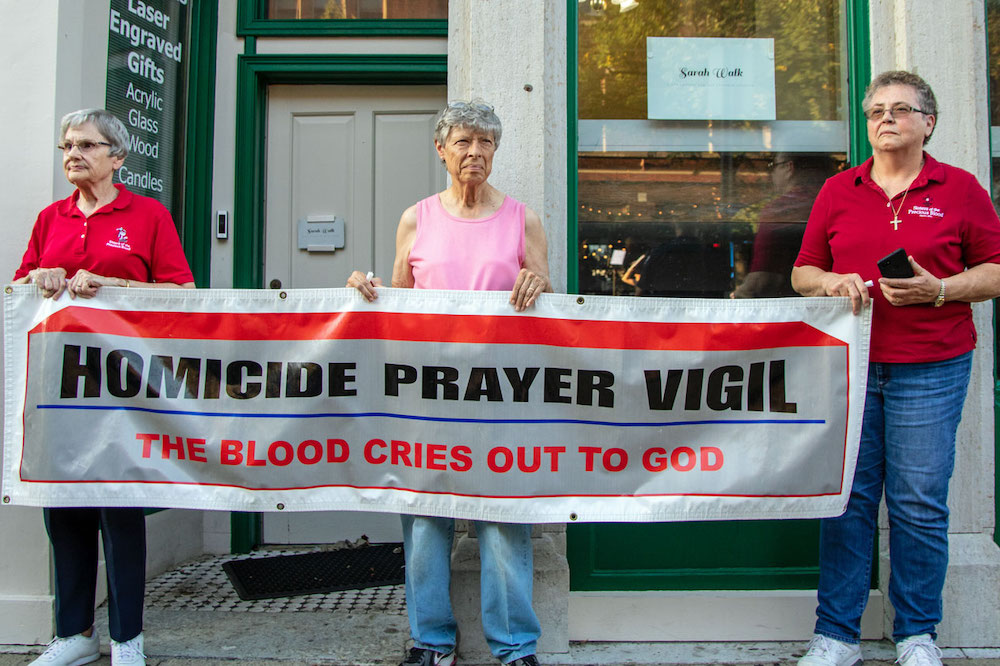 Sisters of the Precious Blood hold vigil Aug. 5, 2019, for those who died in the Oregon District shooting in Dayton, Ohio. Pictured from left are Srs. Jeanette Buehler, Judy Niday and Ann Clark. (Flickr/Becker1999)

The August 4, 2019, mass shooting in Dayton, Ohio, took the lives of 10 people, including the perpetrator. Their personal stories and the pain suffered by their families, friends and co-workers — and even by us, who did not know them — linger like a shadow over our city and over our country. Their lives were precious. They mattered. Their families mattered, and we grieve with them.

Eight additional people lost their lives from gun violence in the Dayton area in July and August of 2019. They ranged in age from 17 to 45. Technically, none of these people died in a mass shooting, if a mass shooting is defined as three or more victims killed at the same time and place. Little publicity, if any, marked their deaths. However, they were not totally forgotten. Prayer vigils were held for them at the site of their homicides by members of the Community Homicide Prayer Vigil group.

We Sisters of the Precious Blood began holding homicide prayer vigils in 1993, held at 131 sites until 1997. In 2006, the Sisters and the Missionaries of the Precious Blood brought together an ecumenical group that resumed the work of this ministry. We meet on Saturdays at sites where homicides have occurred — on the streets, on curbsides, in front yards, in parking lots, in abandoned lots or alleyways, at apartment complexes.

Since March 2006, the Community Homicide Prayer Vigil group has organized over 530 homicide vigils in Dayton and nearby communities. When looked at as an accumulation, isn't that number "massive?" Doesn't it, too, qualify as mass shooting — one victim at a time?

What of those victims, killed one by one? What, if any, thought is given to them, assuming we even hear or read about their deaths? Because most of these homicides occur in lower-income neighborhoods, does that make the victims less important or less newsworthy? Do we stop to consider that their lives were precious to those who knew them? That they will be missed and mourned?

When we members of the Community Homicide Prayer Vigil group hold a vigil, family members and neighbors are sometimes present with us. We hear their remembrances of the victims. We are made aware that the final moments of the victims' lives do not define who they were to their loved ones. What will be remembered and mourned are their smiles; the care they showed to family and friends; their struggles to make changes in their lives. Judgments we may be tempted to make are offset by the knowledge that the story of the deceased as told in the news does not tell the whole story of the person, the child of God, who was cherished by family and friends.

One prayer leader in our group, Pastor Jennifer Scarr of Trotwood Church of the Brethren, has said, "I believe, as Jesus knew, that we are all connected, and so each one is worth being witnessed. Each and every one. Not just their deaths, as tragic as they are, but also their lives."

Perhaps the greatest blessing of these vigils is the gift of presence — first, to those who knew the victims and, second, to those of us who hear their stories. For a time, we stand together: black and white, persons of different economic backgrounds, of different faith traditions, of various ages, and from different neighborhoods. 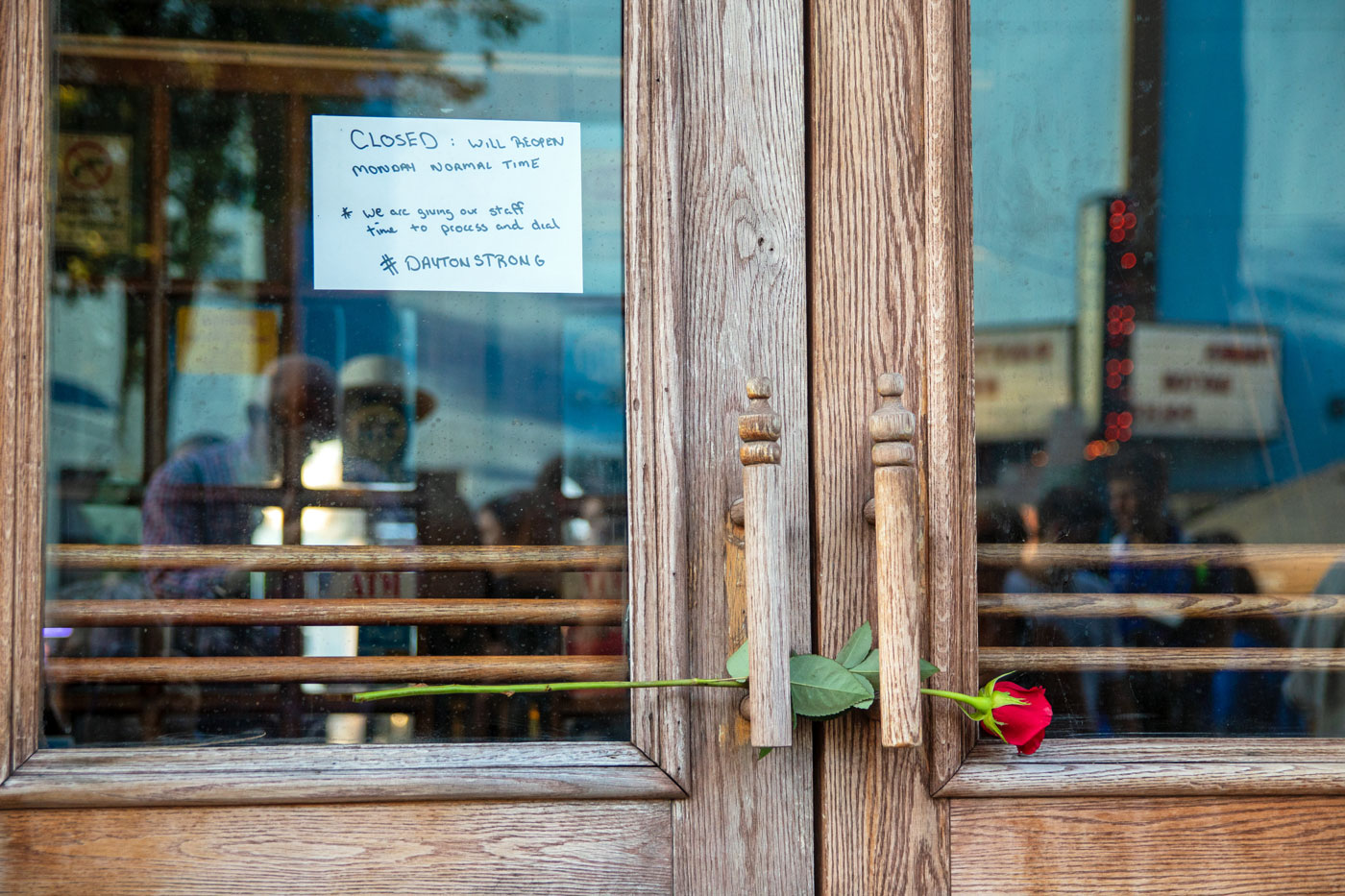 Whether or not we know one another, we are united in the awareness that all life is precious, that a life has been lost. It is not ours to judge. We care about the pain loved ones are experiencing. They are not alone. They see that others remember that their son or daughter, their mother or father, their brother or sister lived and will be missed. Expressions of gratitude from them let us know that our presence helped the healing process.

In turn, it is the presence of family and friends, the sharing of memories, and the occasional forgiveness expressed by them toward the perpetrator that inspire us to continue holding the vigils. The adult son of a 95-year-old man found shot to death in his home expressed it this way: "I pray every day for the person who did this so that when he stands before God he will not still have to account for what he did." 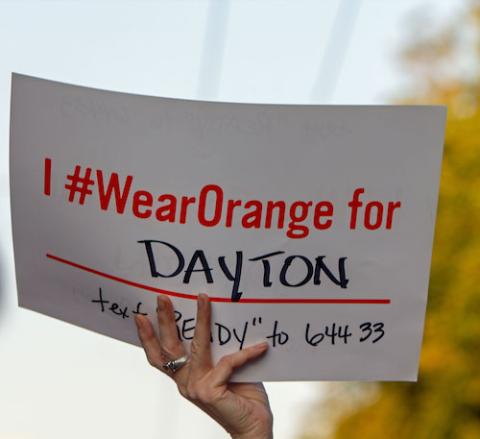 A person holds up an "I #WearOrange for Dayton" sign after the Aug. 4, 2019, shooting. Orange is the color gun violence awareness and reform advocates adopted to show solidarity. (Flickr/Becker1999)

Like so many others in our community, I attended vigils for the Oregon District victims. It is right that we did so and that we continue to remember all victims and families involved in mass shootings. At the same time, I thought of the 530-plus homicide victims, killed one by one, in our Dayton community since 2006. I couldn't help but wonder what difference it would make if 10 or 20 or 50 people attended vigils for each homicide victim in each community where these senseless deaths occur. Would that change the "new normal" apathy? What would such support mean to families and friends to know that the community cared enough to stand with them? And how might our hearts be changed by our caring presence?

[Sr. Jeanette Buehler is a Sister of the Precious Blood in Dayton, Ohio. She has served in elementary education, retreat ministry, social services ministry and various congregational positions. Currently, she serves on the Catholic Social Action Office's Anti-Racism Task Force in Dayton and coordinates homicide prayer vigils in the greater Dayton area.]

Editor's note: Some of this material has been adapted from a post by Sr. Jeanette Buehler for the Sisters of the Precious Blood's newsletter online.

Read this next: Sisters in Erie reclaim sites of violence, make them holy ground