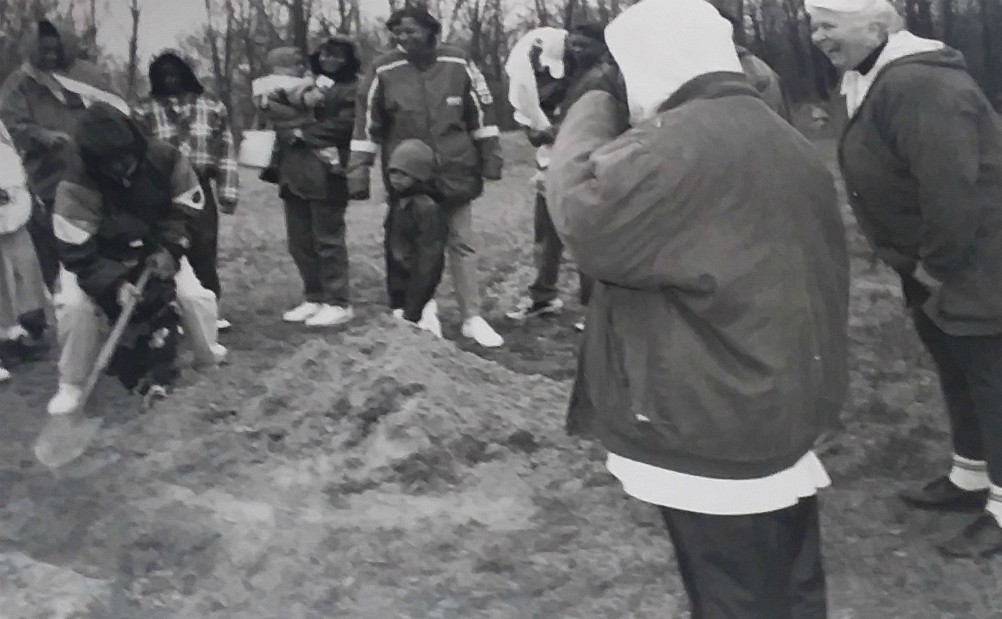 An outing for the residents of Dehon House in 1995. Dominican Sr. Lois McGovern is watching from the far right, as the residents plant a tree. (Provided photo)

In the 2016 election, many Catholics, including vowed religious women, voted for Donald Trump.

As we move toward the 2020 election, Catholics are again contacted in various ways by bishops and priests to vote for his reelection. I have received a mailing sent to Catholics, telling them we must reelect the current president. On the envelope, there is a quote from a cardinal stating that our religious freedom is in jeopardy. Inside, there is a bumper sticker that states, "I am Catholic and I vote." That assumption is expected to influence those who see it. There are many "Catholics for Trump" websites.

I watch other evangelical stations, which carry shows such as Jim and Lori Bakker's. They blatantly show a picture of Trump and tell viewers that they must reelect this president whom God has chosen. They say freedom of faith is at stake. They have buttons and bumper stickers that say, "Vote Your Faith." That is expected to influence all who see it.

The bishops and priests have a pulpit. They encourage the faithful to be single-issue voters. Women religious have no voice, as far as I can see. I am not supposed to have a bumper sticker because our religious community is a 501(c)(3) nonprofit organization. Double standards?

Who speaks for the woman who faces this most serious decision? Do women religious as individuals or as a congregation have the call to speak the truth in its complexity?

I would like to reframe the question of abortion. It's not a question of right/wrong, good/bad, sinful. I know each of us cringes when we think of the death of a baby/fetus. I would like to look at this from the angle of the who and the why. We are not asked to judge, to approve or disapprove. We are asked if we will allow this procedure to be legal.

As I approach my 81st birthday, I look back on 60 years of ministry. Most have been among persons who are oppressed. Part of our mission was to change oppressive systems. Led by the Spirit, I lived among the poor, the Black, the gay/lesbian community, the homeless, the elderly. In each of these ministries, I encountered women who bore much of the burden.

In all cases, their concern was for family, for their children. As you probably have experienced, no matter how old the woman, her children hold a large part of her heart.

For 18 years, I worked on a team at a homeless shelter. There, I encountered many poor women and children. I was able to observe them with their children. Because of our helping with a few of the practicalities of living, like housing, food and counseling, some were able to strengthen the mother/child relationship. For various reasons, others struggled to be kind, to be motherly. Verbal and physical abuse were part of their past life. This doesn't just disappear by wishful thinking.

Abortion has been around for so many years. Remember those black-and-white movies where the woman is absent inexplicably for some months? Remember the young girls who went to stay for some months with an aunt? We've heard of back-alley abortions where the woman risks her life because she is not ready or able to be a mother. In those days and often in these days, it's a question of finances and connections.

Where do I want to stand, to vote on this issue? Woman to woman, I seek to listen, to understand, to be compassionate.

A scenario: A woman has two children, has no means of support except minimal public aid. She is not employable for various reasons, including the lack of child care. There is a man in her life. She becomes pregnant. The man does not want to be a father. Looking not at this present moment, but into the future, she sees no way to handle this new responsibility. What is she to do for her sake and the sake of the two children already born?

Another scenario: A woman has five children and is pregnant with her sixth. Because of unexpected difficulties at the time of birth, the question becomes which life should be saved. Should she leave her five children motherless and her husband left to do the best he can to raise them alone? This scenario is real.

There are many scenarios. Consider the young woman for whom pregnancy is an accident rather than an intentional choice to become a mother, the emotionally challenged woman who feels incapable of carrying out the responsibility of child-raising, and the many other reasons why a woman knows that the timing is not right for her to become a mother.

Is this birth a blessing? Will the 18 or so years ahead be blessed for this child? We say the child can be adopted. As we see in our society, this is often not an option. We say, "We as a church will support you." I ask how and for how long.

The problem for the pregnant woman is real. The decision is gut-wrenching. Only she can make the decision. She and her family will live with the outcome.

As a woman, as a Christian woman who looks at "What would Jesus do?", as a woman religious who is pro-life in all its forms, with whom do I stand? I stand with my sister whose heart is heavy, whose struggle is profound, whose decision is necessary. I listen, I pray, I support.

If this woman were your daughter, what would you do?

Most of all, I want this woman to have life, to have peace. Until I have walked in her shoes, I will never know her burden.

I believe no one has the right to criminalize abortion, to make a criminal out of a woman who is making a choice that she needs to make.

I expect we will vote. Our votes matter. Our country is at stake.

[Lois McGovern is a member of the Dominican Sisters of Peace. An educator, social worker and advocate for women, she was the director of Dehon House, a family shelter in Chicago. Currently, she does social work in her neighborhood and in 2011 was chosen for the Chicago Senior Citizen Hall of Fame.]