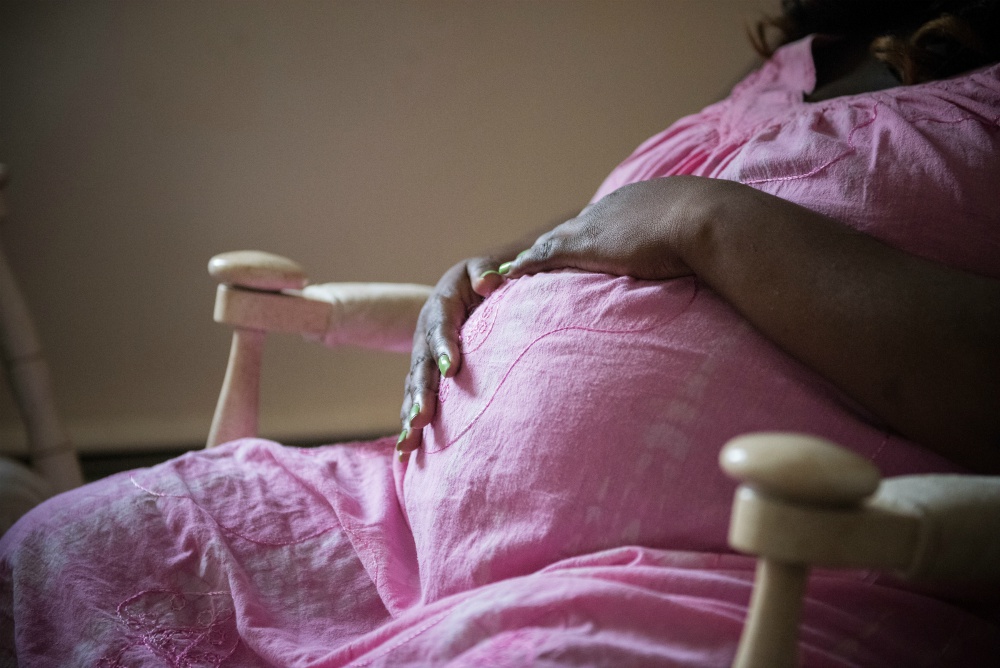 An expectant mother is seen in 2016 at a maternity home in Riverside, New Jersey, one of six pro-life maternity homes in the Good Counsel network. (CNS/Jeffrey Bruno)

We are in an election year, albeit a very different one, with COVID-19 creating a "new normal" everywhere. Over the past four decades, political figures at both ends of the spectrum — radical right-wing anti-abortion fundamentalists and radical left-wing pro-choice supporters — have used the abortion issue as political capital in election campaigns.

The resulting rigid and divisive polarization between feuding camps does not lend itself to serious, reflective conversation among people who seek solutions that respect both the moral challenge and the complexity of the abortion issue in modern life. In fact, angry rhetoric further solidifies polarization and all but guarantees that no workable consensus will develop.

In January, National Catholic Reporter carried a significant article headlined "It's time to change the abortion debate in America." It argues that framing the debate simply as an either/or belies reality. Authors Patrick Carolan (Catholic) and Brian McLaren (evangelical Protestant), both representing the organization Vote Common Good, contend that there are now at least five identifiable groupings around the abortion issue within the faith community in the U.S.:

Carolan and McLaren invite politicians, religious leaders and citizens in general to turn away from "a rhetoric of mutually-assured destruction" and reframe the debate in a "Next Generation Abortion Conversation." Such conversation could identify compromises around which consensus might possibly grow. It removes the need to demonize the other side.

For example, after extensive conversations with theologians, women and other informed members of the faith community, I have concluded that there is already a growing consensus that criminalizing abortion helps no one — not women, not medical providers, not society. In such conversations, people often note that safe, legal abortion provides protection against "a return to the back alleys," or situations that limit access to all but wealthy women.

I sense, too, more agreement that consideration of the moral component is a significant part of the conversation, however complex. People generally affirm that abortion ought not be regarded as simply another form of birth control. Data from the Clinton era indicated that abortions decline when programs of assistance with raising children — such as paid maternity leave, affordable day care, CHIP medical assistance, and food stamps — are readily available.

Carolan and McLaren propose that we "shift the debate from making abortion illegal to making abortion less and less necessary," opening the door to a conversation that allows a new generation to address issues in a new and wiser way.

Elements of such a conversation might include the following:

Religious leaders must certainly participate in this conversation, but it is critically important that they do so collaboratively with people of goodwill from all faith traditions, as well as secular humanist traditions and cultures. Their unique role as leaders in faith communities is a pastoral one focused on providing people with quality religious education to enable well-informed participation in discussions of religious and moral issues of the day and firm grounding for adult conscience formation.

A new generation of clergy and laity could work together to build a life-affirming consensus that can ultimately provide grounding for meaningful law in a pluralist society.

Contemporary experience gives ample evidence that this will not be easy. A major question facing the Catholic community is whether the U.S. bishops are willing to participate on equal terms with the broader faith community and secular groups in this new generation conversation.

Have they become too accustomed to a politics/power/control model from the past? A January opinion piece by Tom Roberts, then NCR's executive editor, pinpoints this concern: "Trump seals his Catholic deal: The selling of the church's moral authority is complete."

President Donald Trump invited support from the U.S. bishops in 2019 by reaffirming his 2016 commitment to secure reversal of Roe v. Wade by appointing conservative justices to the Supreme Court (the old politics, power, control model). He appears to have succeeded, as the bishops affirmed abortion as the "preeminent" issue to guide 2020 voters, without giving adequate attention to all the related life issues currently threatening us: e.g., poverty, racism, violence, anti-immigrant sentiments, endless wars.

Evangelical Christians face a similar dilemma, that of selling out Christian teaching on the sacred dignity of all life for a narrowly focused anti-abortion agenda. In December 2019, Christianity Today editor Mark Galli asked how a candidate with as little regard for life as Trump's policies suggest — rejecting refugee families seeking asylum from violence and torture in Central America; separating children from parents at the border; fanning flames of racism, bigotry and violence with vitriolic language; repealing clean water and clean air laws; disregarding human rights throughout the world — can be labeled pro-life.

Commitment to the sacred dignity of all human life as a preeminent concern loses authenticity when limited to an isolated anti-abortion stance.

With 2020 political campaign ads on TV bandying about the same old trite labels, could we possibly shift to the dynamic conversation plumbing the depths of what being pro-life really means as Carolan and McLaren suggest? It certainly merits a try.

[Sr. Patricia McCann is a member of the Institute of the Sisters of Mercy from Pennsylvania. With an academic background in American church history, her ministry experience was divided between teaching and administration, in secondary school and in a seminary. Currently, she continues a retirement ministry of writing, speaking, retreats and workshops.]

Related: Q & A with Sr. Patricia McCann: 'Be a thorn in the side of injustice'