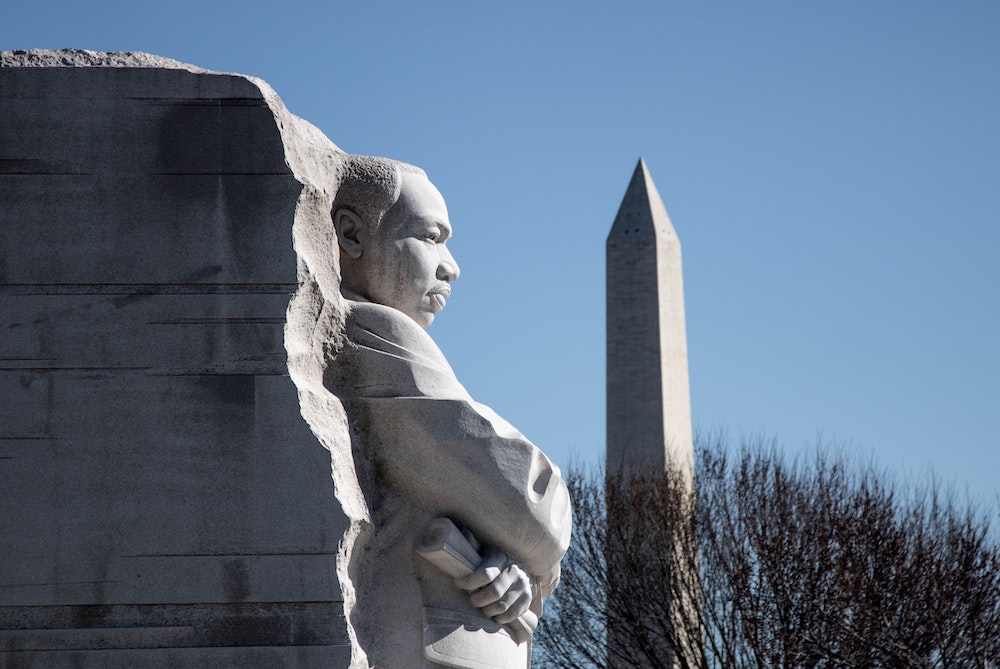 The Martin Luther King, Jr. Memorial in West Potomac Park in Washington, D.C., was dedicated Aug. 28, 2011, the 48th anniversary of the March on Washington for Jobs and Freedom, though the ceremony was postponed until Oct. 16 due to Hurricane Irene. (Unsplash/Forest Simon)

"It is only with the heart that one can see rightly; what is essential is invisible to the eye."

My Catholic moral education began in 1952 at an "Irish" parish, Christ the King in East Cleveland, Ohio. Fortunately, the school was staffed by Ursuline Sisters who taught me by word and example what living the Gospel of respect for all lives meant.

Living a moral, Catholic life was very clear: a review of the list of sins in my First Communion prayer book followed by weekly confession that kept me "in the state of grace."

At the time, I was unaware that my moral education was woefully incomplete. However, interventions by Ursuline Sisters awakened my moral ability to "see rightly" on a much deeper heart level of personal connection and feeling that transcended external differences.

In 1956, I was a third grader, living in a white neighborhood and parish and totally oblivious to the Montgomery bus boycott led by Rosa Parks and the Rev. Martin Luther King Jr. The closest I came to an appreciation of the struggles of "difference" was our family's annual Aug. 15 trip to Cleveland's Little Italy to celebrate the Feast of the Assumption, "Italian style."

Even as a third grader, I knew instinctively that if I told any of my Christ the King classmates that I watched a procession with a Madonna covered in money, followed by elderly women singing hymns in a "foreign" language — dressed in black and walking in stocking feet on hot pavement as a penance — I would be viewed skeptically, as an "outsider" who was considered "strange." Surely, I would feel hurt and excluded: "different" and not to be trusted.

Sr. Mary Robert taught me my first moral lesson in the acceptance of difference. She instructed us to print our names on name cards; I was in a quiet panic; I was afraid my long, Italian name would not fit on the name card. Sister sensed my distress; she smiled and said: "Your name is beautiful; it sounds like music!" Now, I felt the difference between exclusion and belonging.

In 1960, during the excitement of John F. Kennedy's campaign to become the first Catholic president, my mind and heart were opening to a wider world, as the evening news reported on the civil rights struggle: boycotts, sit-ins, dogs and violence. Sister Claudia told us about Ruby Bridges, who, at the age of 6, was escorted by federal marshals in New Orleans to attend her all-white elementary school. I was beginning to sense that something was wrong, morally wrong, even though it did not appear on my "sin list" in my prayer book.

Dr. King's message seemed to have been given an imprimatur by President Kennedy and his brother Robert, the attorney general who supported the August 1963 March on Washington and sent federal troops to protect Black students attempting to enroll in white schools.

On June 11, 1963, our first Catholic president addressed the nation and specifically stated that civil rights was "a moral issue … as old as the Scriptures and as clear as the Constitution."

In 1964, I sat mesmerized in front of our television as King delivered his "I Have a Dream" speech, and I not only understood his moral arguments, I felt them in my heart and gut.

Now, most certainly, if President Kennedy, Attorney General Robert Kennedy and Martin Luther King thought it was OK to be "different in color," I would have to add discrimination against racial difference to that list in my prayer book.

On to high school, where Sr. Frances Therese assigned an essay on identifying a contemporary person who most closely resembled Jesus if he walked the Earth in 1964. It was clear to me as a teenager that Robert Kennedy's ability to communicate with disenfranchised, "outcast" Americans, especially children, in the poorest counties of our country, his dogged opposition to the Vietnam war, his commitment to civil rights, made him the person who, for me, lived the Gospel values of Jesus, felt them and inspired many others to feel them in their hearts and to live them.

In 1968, I attended Ursuline College and worked with Sister Miriam to sponsor "Black Week" on campus to examine issues of race in America. The more I learned, the more the moral fog lifted: redlining in housing, unequal pay for equal work, inferior education — all were obstacles at every turn based on racial discrimination.

Now, I am 73 years old and Pope Francis, on June 3, 2020, clearly names racism a sin; a sin that joins the ranks of all other sin lists in a Catholic examination of conscience. We, the Catholic community, are challenged to acknowledge racism, as a sin that demands admission, conversion, sorrow, repentance and change of heart.

I myself am being called to examine my isolation, my blindness, my inadequate understanding of what it means to be Black in America today and to understand with deeper insight, the story of the Good Samaritan as the story of an outcast in society who most truly mirrored the heart of God.

As a graduate of 16 years of Catholic education, I was very clearly schooled in the Catholic moral code of right and wrong. But I keep finding that I still have a lot to learn!

[Beverly Anne LoGrasso, a member of the Cleveland Ursuline Sisters since 1965, has served in education, administration and prison ministry to women.]