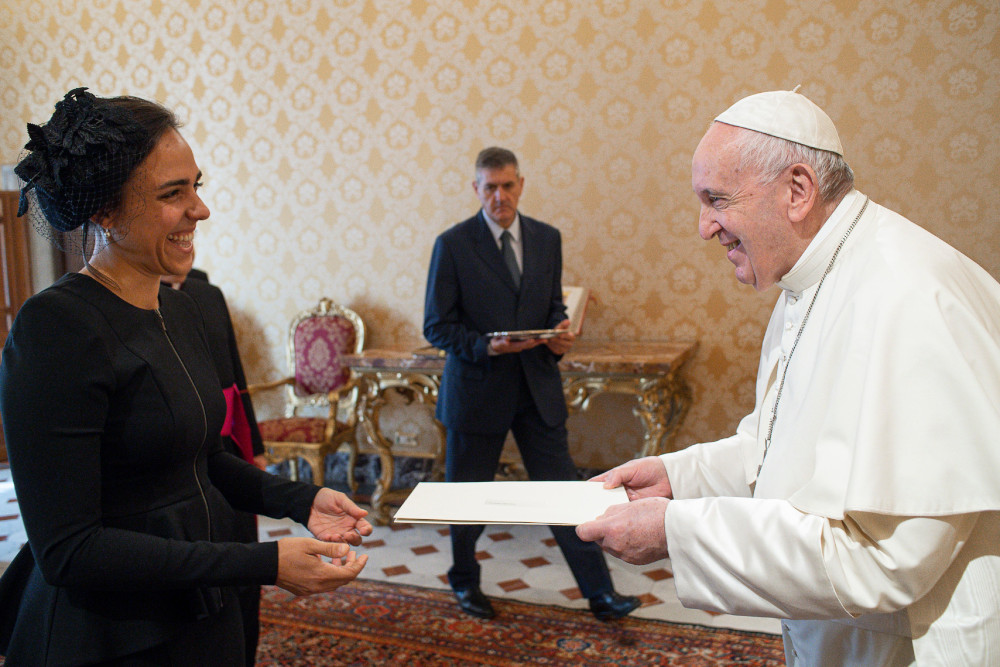 Chiara Porro, the Australian ambassador to the Holy See, presents her letters of credential to Pope Francis at the Vatican Aug. 27, 2020. Porro was one of the speakers marking International Women's Day March 8 with a webinar. (CNS/Vatican Media)

A more inclusive attitude and a cooperative approach that includes women are needed for the future of the church and society, said a number of Vatican officials.

The three Vatican officials and a top member of a Vatican commission were part of a panel of speakers invited by the Australian Embassy to the Holy See to mark International Women's Day March 8 with a webinar titled, "An equal future in a COVID-19 world: Champions of Change Choosing to Challenge."

The webinar's focus, Ambassador Chiara Porro said in her opening remarks, was what change was needed in order to emerge from a multitude of crises unfolding in the world and to "build back better for everyone."

When it comes to the church, one important step, some speakers said, will be creating a more "synodal" church, which is the theme Pope Francis chose for the next world Synod of Bishops at the Vatican in 2022.

"Synodality," which means "walking together," is a key topic of his pontificate; the idea is built on the fact that the grace of baptism makes a person a part of the body of the church and, therefore, responsible for its life and mission. In a hierarchical church, that shared responsibility calls for regular, serious and structural forums for listening to all members of the church.

Salesian Sr. Alessandra Smerilli, an economist and coordinator of the Vatican COVID-19 Commission's task force on the economy, said if the church of the future is to be a more synodal church, then women have to contribute to how the church works and is organized.

For example, women can contribute by changing the concept of leadership that does not see the leader as a "head" and everybody else as a "follower," but as a person who can coordinate a team and projects. They are "not above others," but serve with the right skills for the particular mission at hand, she said.

The concept of power also must change from that of being better than others and managing "over" others to being able to make things happen and to motivate, coordinate and unify people, she said.

"I dream that in the future the church and the Holy See can have the evangelical flavor of the early Christian communities, made not of the best," but of people who encountered Christ, and act as a community that is "dynamic, proclaims the Gospel and knows how to go against the tide," she said.

Xaviere Missionary Sr. Nathalie Becquart, who will be the first woman with a right to vote at a meeting of the Synod of Bishops, said a synodal church requires a "new mindset" in which competition or people locked in different categories or levels is replaced with cooperation and reciprocity. 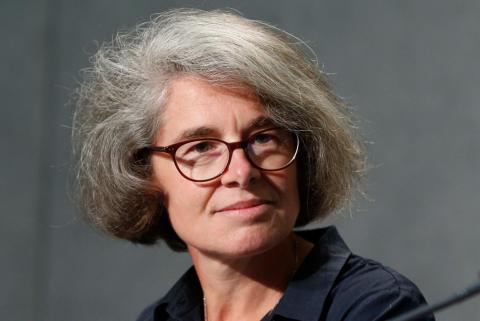 Xaviere Missionary Sr. Nathalie Becquart, one of two undersecretaries to the Synod of Bishops, attends a news conference at the Vatican Oct. 9, 2018. Becquart was one of the speakers invited by the Australian Embassy to the Holy See to mark International Women's Day March 8 with a webinar. (CNS/Paul Haring)

Pope Francis appointed Becquart to be one of the two undersecretaries to the Synod of Bishops in early February. Her appointment and that of other women to key roles at the Vatican "reflects Pope Francis' desire to give more places to women at all levels of the church," she had told Catholic News Service.

At the March 8 webinar, Cardinal Mario Grech, secretary-general of the Synod of Bishops, said her appointment and permitting her to vote in a synod is "a major milestone" and is something that should not be limited to just this one institution or just to voting rights.

"The intention of the synod is to reflect about the praxis of the people of God, journeying together under the guidance of the Holy Spirit," that is, how the church can envision "the permanent interaction of the different members in her midst in discernment processes."

This reflection must not just be "a mere intellectual exercise in which some talk about the possible involvement of other baptized" members, but must be lived experience of mutual listening and common discernment with everyone included.

Becquart said in her presentation that synods represent "a process of listening" to those who are often in need or voiceless, offering an important "sound box" for people, including women.

The final documents of the latest synods — on young people and the Amazon, in particular — all underline the urgency of offering "a greater recognition and a greater valuing of women in society and the church."

"Synodality is about mission" and what that entails is spelled out clearly in "the road map for church that is 'Laudato Si'' and 'Fratelli Tutti,'" she said.

"I am convinced we cannot have a good relationship with creation in mutual respect without this respect and interdependence between men and women," where there is co-responsibility and teamwork, she added.

Francesca Di Giovanni, a longtime Vatican official, was the first woman to hold a managerial position at the Vatican Secretariat of State when Francis appointed her as an undersecretary in the Vatican's foreign ministry office in January 2020.

She said at the webinar that Francis has shown from the start the need for walking together in a spirit of solidarity and fraternity.

Also at the webinar was Bishop Paul Tighe, secretary of the Pontifical Council for Culture — the only Vatican dicastery with a permanent consultative body made up of all women to provide their perspective on the council's work.

In addition to things the council was doing to be more inclusive, he said, on a personal level, he tries to make sure they have a mix of participants and speakers for events they organize "so the face of the church visibly includes those people who are competent from a range of backgrounds."

In doing research and study, he said he intentionally reads women authors and the contributions of women leaders to make sure he is reading from a wider range of perspectives.

And he said he tries to be more attentive and "follow the arguments of people who are critical, particular women," and then tries "to see the value in what they have to say."