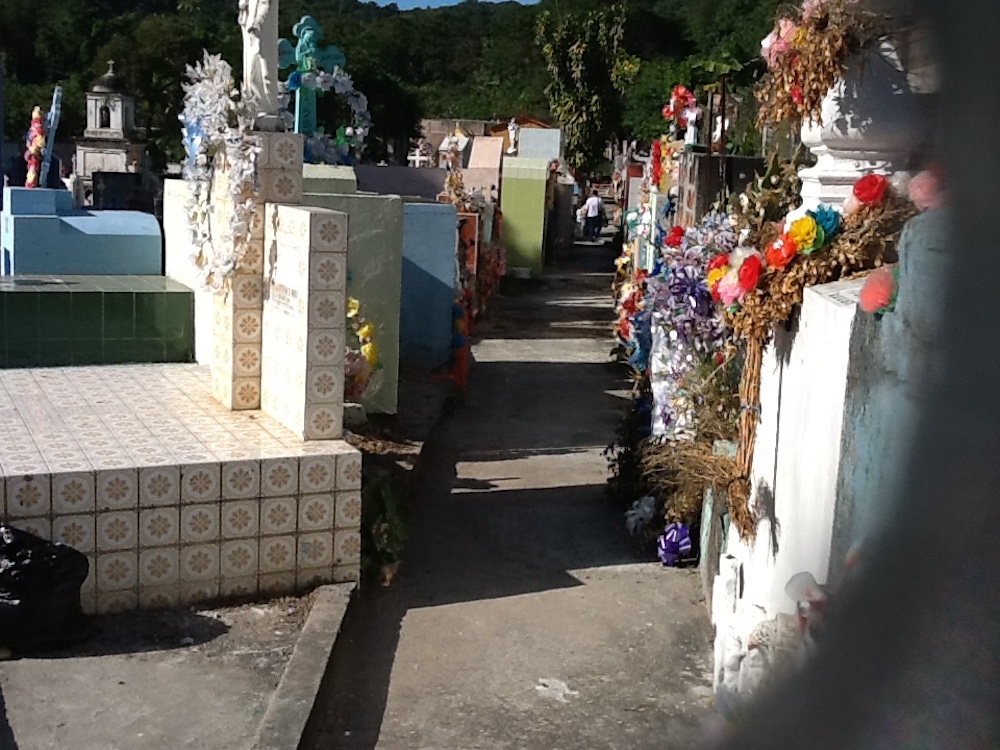 My thoughts today come from Isaiah (58:1-9a) on the kind of fast that our God wants.

I was musing about this in the context of my trip to El Salvador in 2015. The background of that trip started many years ago. A brutal civil war was raging in that country. The military was propping up the government and the two together were truly oppressing the indigenous people and the poor by confiscating their land for big multinational corporations — land that had been theirs for many years. The government was using the scorched-earth policy. That meant the military went from village to village burning everything so that the people would have nothing to come back to. And with monetary help and training from our United States government, they murdered over 71,000 people in that civil war.

And into the civil war came an archbishop. At the beginning, the government was very happy with this archbishop. He was a gentle soul, and he was living comfortably with the military and government regime. But the more he learned and listened to his people, the more he saw his priests murdered for being with their people, the more he became the archbishop of the poor and the dispossessed. You might say he went from the first fast that Isaiah mentioned and entered into a fasting that God wanted. This gentle archbishop's fast was to lift the oppression from the peasant people. His fasting was to untie their yoke. His fasting was to bring hope to the poor. His fasting meant not turning his back on his people. 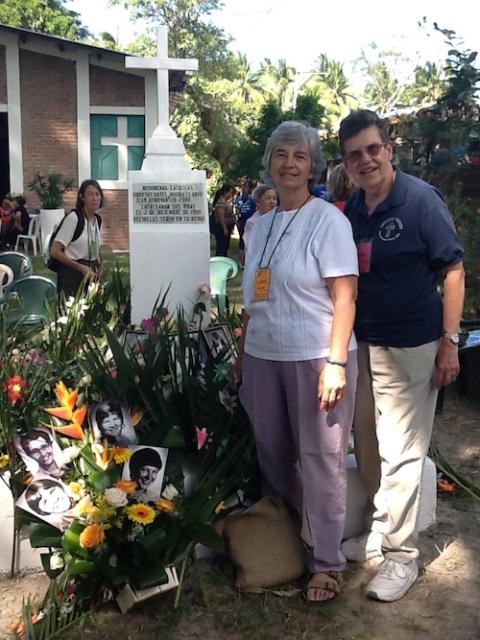 Ursuline Srs. Carol Reamers of Toledo, Ohio, and Janet M. Peterworth of Louisville, Kentucky, at the grave marker for the four murdered churchwomen in El Salvador in 2015 (Provided photo)

And so Archbishop Óscar Romero began to speak out. He began to point out to the government that theirs was not the way of the Gospel, that their behavior was not what Catholic social teaching taught, that their behavior was basically wrong. And then one day while he was saying Mass in the hospital of Divine Providence in San Salvador — while he was standing at the altar with his arms extended in prayer, a sharpshooter shot a bullet from the window of a car through the open door of the chapel and into the heart of the archbishop. And he died before he could finish Mass!

I stood at that altar. I stood on the floor where he bled out. I saw the alb that the archbishop had on — the alb with the bloodstains — the alb that could not protect him. And I saw that day how dangerous Isaiah's kind of fasting could be. It proved not only to be dangerous for Archbishop Romero; it proved to be deadly. And I was sad and strangely afraid.

Then one night, coming home from the airport where two of them had gone to pick up the others, their van was forced off of the main highway, down a dirt road, past a village, and in a lonely field they were raped and shot dead and buried in a shallow grave under a beautiful large pine tree. All these women were fasting. And I went to that site, too. 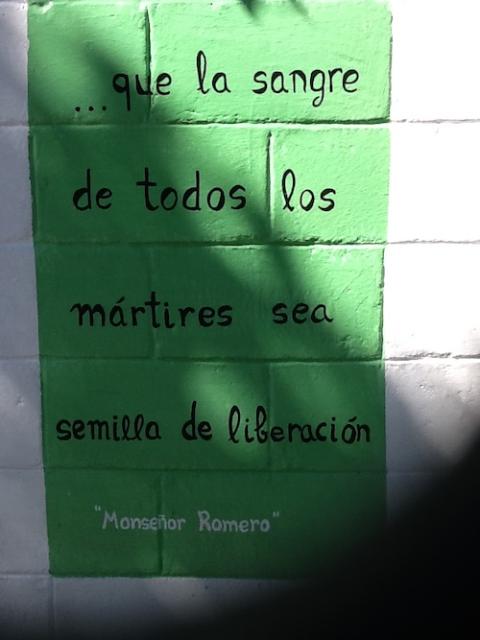 Part of a mural in El Salvador, quoting Archbishop Óscar Romero: "May the blood of all the martyrs be the seed of liberation." (Janet M. Peterworth)

When the buses turned down the dirt road off the main highway, our guide asked us to go the rest of the way in silence. And in that silence, I wondered when they were taken off the road that night what Maura, Jean, Dorothy, and Ita were thinking (Maryknoll Sr. Maura Clarke, lay missioner Jean Donovan, Ursuline Sr. Dorothy Kazel and Maryknoll Sr. Ita Ford). I wondered if they tried to negotiate with the soldiers. I wondered if they were speaking English so the soldiers might not understand. I wondered if they thought that this was the end — that their kind of fasting was leading to this. I have thought many times about that conversation and wondered what it was like. About a fourth of a mile before we got to the spot of the murder, we got out of the buses and walked in silence. Then, almost suddenly, we came upon the place where this murder happened. There was a simple white stone monument under that beautiful large pine tree. We were standing on the ground where the blood of these women had been shed that night, not so many years ago in a country not so far away.

But interestingly enough, this day was for celebration. Many people had gathered — people from the campos, people who came in pickup trucks, on foot, in cars — they came to that simple place, where we had a beautiful eucharistic liturgy in memory of the church women.

The government said this all happened 35 years ago; just forget it. The people say, it seems like only yesterday, and we will not forget it. Nor will we let the next generation forget it. These women fasted for us. We will always remember them. And I stood there, on what had been their shallow grave, overwhelmed with emotion, and prayed.

Then there were the six Jesuits and their housekeeper and her daughter who were also fasting. The Jesuits were attempting to lift the yoke from the oppressed, too; they were helping people to make better decisions and to speak out about their lives. They were doing the most dangerous fast of all — they were educating. They were forming the minds of a new generation. They were discussing liberation theology with faculty and students. And they were shot and mutilated for this fast.

Related: US women religious look back on El Salvador martyrs, ahead to delegation to mark 35th anniversary

We went to the Catholic University of Central America, and there I stood in the garden where the bodies of these eight Christians were found. It's unknown whether or not they were shot and killed in their beds and then dragged to the garden, or whether they were brought to the garden and shot there. We don't know because it happened in the middle of the night so there would be no witnesses. But it happened because they were fasting. And I stood looking at blooming rose bushes that now mark the spot where the bodies were discovered at daylight. And I wept — having had enough of this kind of fasting.

In Isaiah (58:9) we read, "You shall call, and God will answer. You shall cry for help, and God will say, 'Here I am.' " I have to believe that in each of these situations, in each of the places where I stood, our God said, "Here I am," as these people ended their fast by giving their lives. I have to believe that, else all they did would have been in vain.

So, it's difficult to say what observing this kind of fast means. It's difficult to say where this kind of fast might take us. But the Gospels tell us that now that the bridegroom is no longer with us in body, we can fast. So I suppose that is our role now — to enter deeply into this fast and to understand its dangers and to believe with all our might that no matter where this fast takes us, God will say to us, "Here I am." 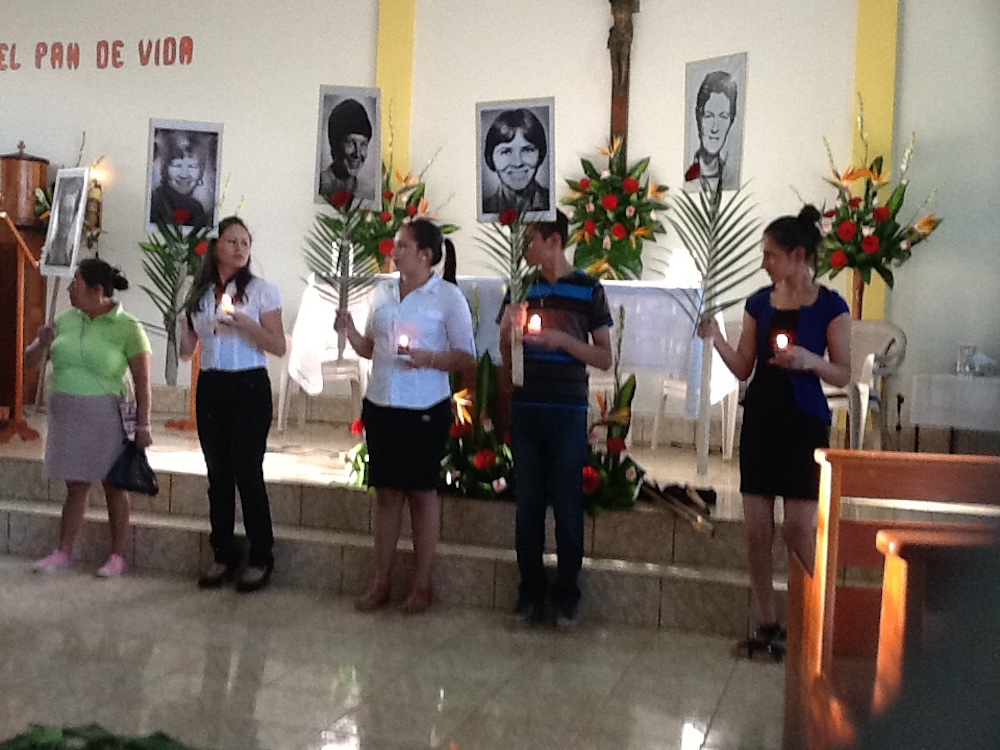 Janet M. Peterworth is a native of Louisville, Kentucky. With an academic background in English, pastoral work, clinical pastoral education, and nonprofit board education, she has worked with a variety of educational and nonprofit agencies and served as a group facilitator and strategic planner. She has directed non-profits in Appalachia and served as board chair of the John A. Sheppard Memorial Ecological Reservation, a land trust dedicated to preserving the mountains in Mingo County, West Virginia. She has served on a number of other boards and advisory groups. In August of 2020, Sister Janet Marie completed her six-year term as president of the Ursuline sisters of Louisville, Kentucky.

Read this next: What is the US churchwomen martyrs' message for us today?