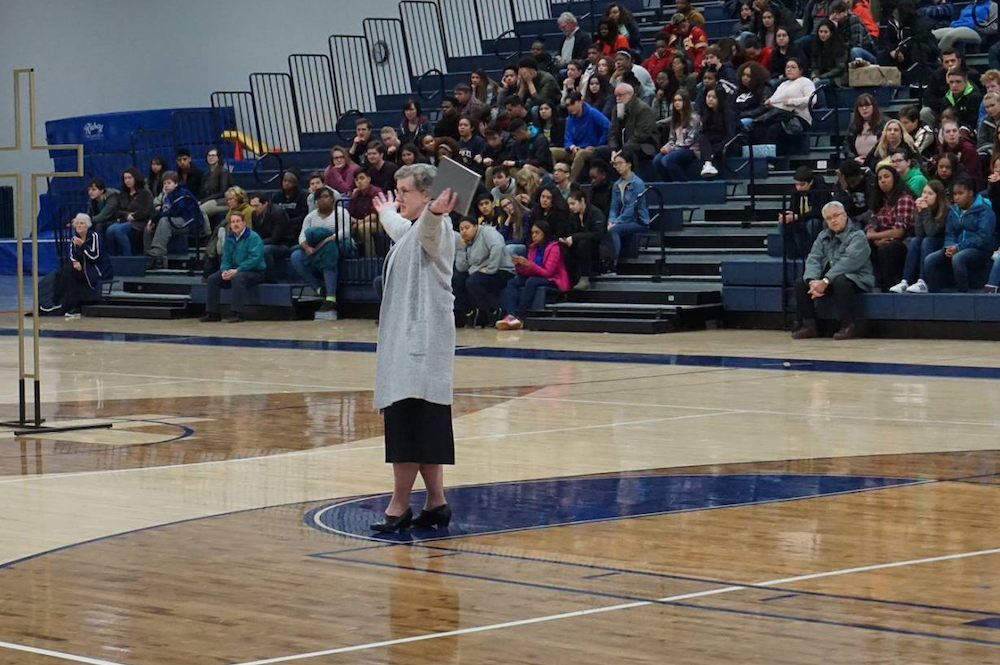 Crammed into bleachers and stacked to the ceiling in our gymnasium, I joined everyone else from school for our annual reconciliation service. The presider was a fire-and-brimstone kind, promptly telling all of us how bad we were and making sure each and every one of us knew we were condemned for eternity. Stunned and irritated, I spoke with the campus ministers: This could never happen again — and they agreed. It was a classic "open mouth, get a job" kind of conversation. I found myself charged with creating the next reconciliation service for our school community.

School, especially high school, is part theatre, I know that. So how do I capture and hold the attention of a large group of teenagers from diverse religious, socioeconomic, ethnic and national backgrounds around something I'm not all that thrilled about myself? Let's be honest, most of us don't like to focus on the sinful part of life. I knew I had to be completely honest with them. I had to connect our reconciliation service with what was happening in the larger world.

Climate change is the hot issue, especially in schools, so the planning team of students proposed working with that. Perfect, we could use the Franciscan Canticle of Creation and speak in terms of care for creation and needing to be reconciled with creation as well as each other and ourselves. We had the remarks of Greta Thunberg's various addresses to the United Nations (i.e. Climate Change Conference in December 2018) along with a bit of history from our very own, the late Sen. Gaylord Nelson (D-WI), the founder of Earth Day. So the planning began.

Weather in Wisconsin is always an adventure — the standard line is we can experience all four seasons in the course of an hour. The students wanted to do some kind of action outside, so we'd have to have a couple of different weather plans just in case. Plan A: assemble in the park three blocks from school, pray and pick up trash as we returned to school. Plan B: walk around the campus, cleaning up, and then gather to pray. Plan C: pray in the parking lot and then clean up along the fence lines. We had it covered, there was no need for Plan D.

The weekend before our prayer service saw someone drive through the park and really tear it up, so much for care for creation. Plan A was done. The night before the service, we got three-quarters of an inch of rain, so cleaning up around campus would be impossible as there was more mud than anything else. Plan B was done. The morning of that day we had a fine mist, giant puddles, and a biting wind-chill. Plan C was done. There was no Plan D. We had to make one and fast. Enter Louie and Wall-E.

Louis Armstrong's "What a Wonderful World" played as everyone gathered in the gym. We were pleasantly surprised at how many knew the song, and faculty as well as the kids sang along. As St. Francis' Canticle was proclaimed, we viewed pictures of "good and bad": Brother Sun — a beautiful sunrise and one obscured by smog; Sister Water — a pristine beach and one filled with garbage; Brother Fire — the beauty of fire and the massive destruction it can bring; Mother Earth — the famous blue marble and strip mining; etc.

Then came Greta's challenge, proclaimed by the students: We can't continue to ignore what's happening to our climate, and if the adults and world leaders and mega-corporations won't do something, the youth would.

"Wall-E" was next, the two-minute opening of the Pixar animated movie, where we see our little robot friend collecting, compacting and stacking garbage and finally catching a brief glimpse of sunlight reflecting off the stacks of compacted metal. The excitement in the gym was palpable.

Next came the questions. "Do we have a wonderful world?"

A resounding "No!" from the crowd.

High school students participate in the reconciliation service that focused on right relationships, with God, each other and Earth. (Dan Carey)

"So, how can we make it so? How can we be reconciled, how can we cleanup our act? Are we ready and willing to do something instead of waiting for 'adults and leaders' to take care of it?

How can we be in right relationship with our planet, with each other, and with ourselves?"

I mentioned the plans we had about cleaning up around the neighborhood or school and how that couldn't happen because of weather. I challenged adults and students alike to find a physical space on campus to clean up while reflecting and praying about what we each personally need to cleanup for and within ourselves. After all, the ultimate right relationship is with God. The bell rang, and we moved into the rest of the school day.

By the end of the day, the stories were numerous and circulating. The cafeteria supervisor spoke about not having to remind the kids to clean up after themselves, something he automatically does each lunch period. The kids themselves shared how they were much more attentive about garbage versus recycling and picked up what they found out of place. Hallway conversations were more friendly and much quieter. Finally, the office staff reported a flurry of activity keeping our confessor busy. A few days later, the stories stopped — yesterday is old news to kids. But as the week went on, the behaviors continued. Plan D worked!