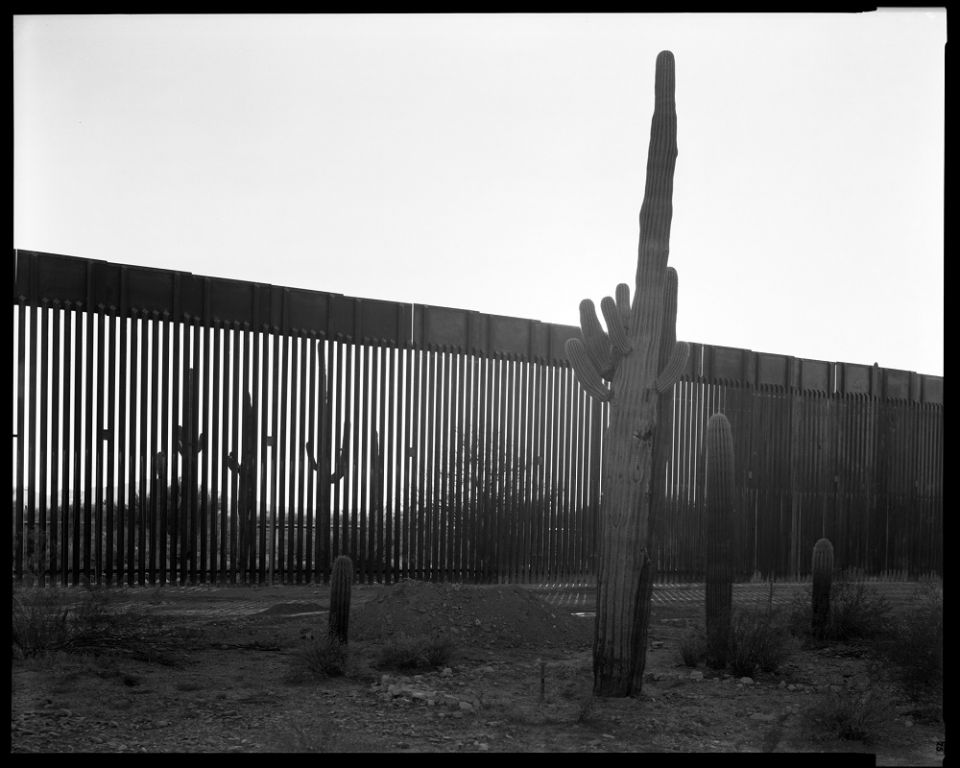 Measuring up to 40 feet tall, saguaro cacti in Organ Pipe Cactus National Monument tower over the border wall near Lukeville, Arizona. "There's a lot of sections in this national monument to nature where the dividing line doesn't make any sense," photographer Lisa Elmaleh says. The wall also creates a barrier in ecosystems that span the border, making it impossible for animals to move naturally through their habitat. "The fence is an intense visual in the landscape," Elmaleh says. "The [cacti] are facing each other, so you can imagine what it may have looked like without the wall there, and the saguaros in particular have this human quality, almost like they're waving at each other through the wall." (© Lisa Elmaleh)

Lisa Elmaleh's 8-by-10 camera is so disarming — fit for a prop in an old Western — that the antiquated device grants her access and cooperation where a digital camera would have invited suspicion or annoyance.

Upon seeing the camera, the Catholic sisters and volunteers at migrant shelters whom Elmaleh met along the U.S.-Mexico border "understand they're being documented in a historic way," she says.

In January, the 36-year-old photographer from Paw Paw, West Virginia, crystallized Texas and Arizona in the amber of Donald Trump's waning presidency, when the continued construction of the much-discussed border wall was coming to a halt. At the time, the Migrant Protection Protocols (also known as the "Remain in Mexico" policy) was still in effect, leading to growing informal refugee camps along the border where migrants had to wait for their court dates outside the United States.

When Elmaleh returned to the border in May to volunteer at the Humanitarian Respite Center of Catholic Charities of the Rio Grande Valley in McAllen, Texas, she met dozens of sisters who traveled from across the country to volunteer at the center for weeks at a time. In addition to capturing the vast desert of the Southwest, as she had several months before, this time, Elmaleh also chronicled the Catholic sisters with whom she volunteered. 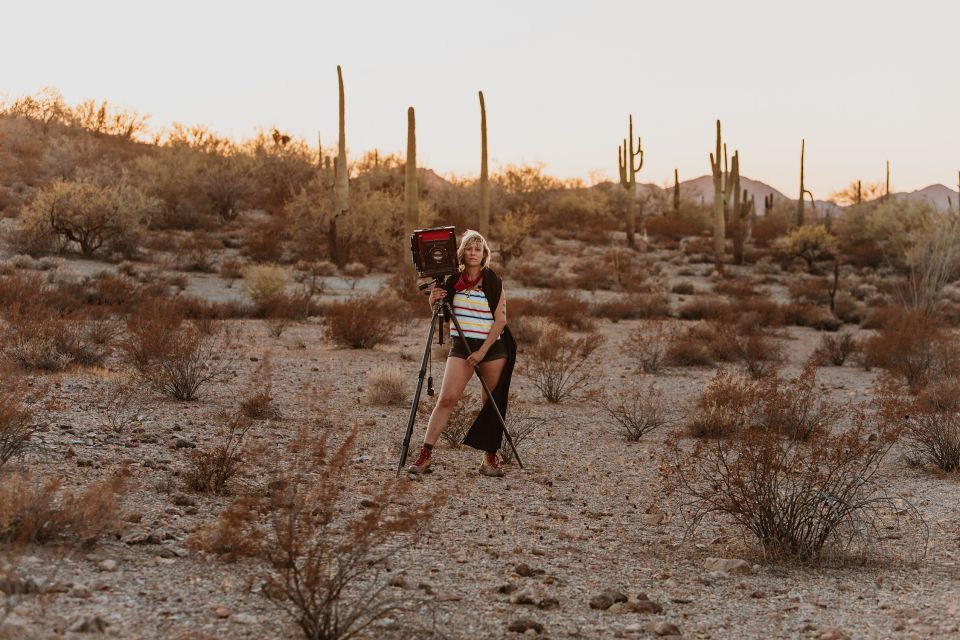 Though developed in coarse black-and-white photos, Elmaleh's photography communicates the unkind conditions of the migrants' journey north — sweltering heat through dry land, isolated from city resources — as well as the visual disruption the snaking wall imposes on the natural landscape.

The camera must be used on a tripod, as the size and weight are too great for handheld use. The camera is unfolded to extend its bellows, the lens placed on the front standard of the camera, and then Elmaleh ducks under a black cloth to focus on the subject in front of the lens. Each 8-by-10 sheet of film is exposed one at a time, two sheets per film holder. The film is then unloaded in total darkness and tray-processed in the photographer's darkroom upon returning home.

"With this project, with any work I do, I want to approach people with kindness and convey empathy, and I want viewers to have access to that empathy and be able to relate," Elmaleh says.

And though she was asked not to photograph the faces of migrants she encountered along the border, she says she wants "the humanity to be present." 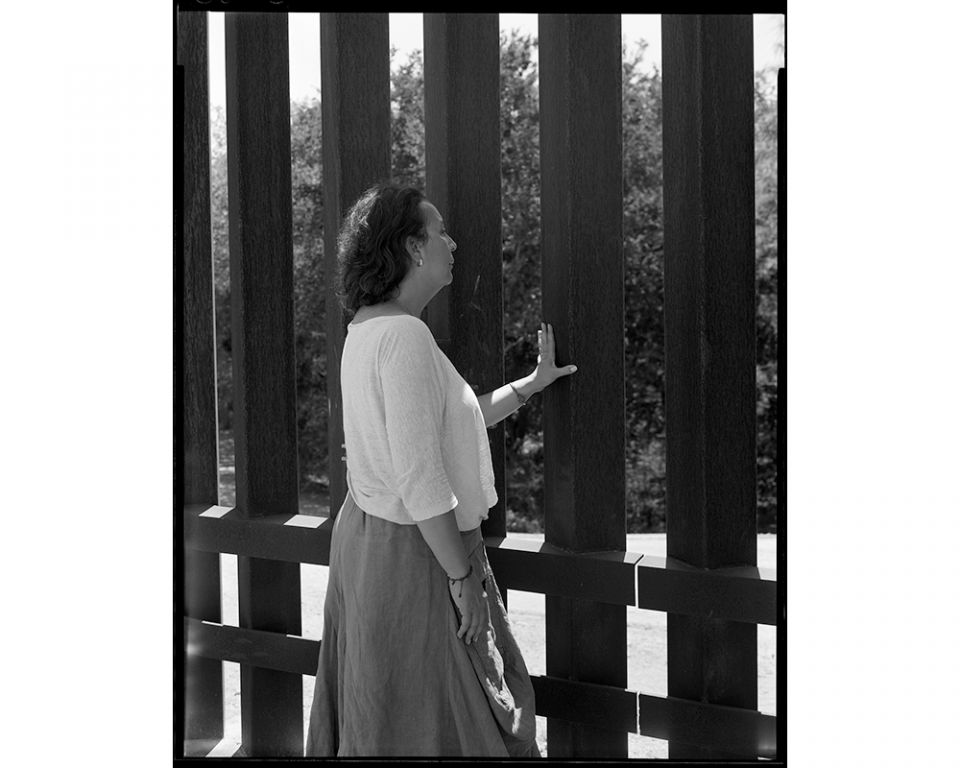 Carmen Seleme McDermott, who volunteered with Elmaleh at the Humanitarian Respite Center for migrants in McAllen, takes a break from sorting clothes at the center to visit the wall with sisters in Hidalgo, Texas. McDermott, who works at St. Joseph Parenting Center in Stamford, Connecticut, felt a call to volunteer at the respite center in May. "She felt that is where God needed her to be," Elmaleh recalls her saying, that "there is a humanitarian crisis at the border that needs all of us to work together to help the most vulnerable." (© Lisa Elmaleh) 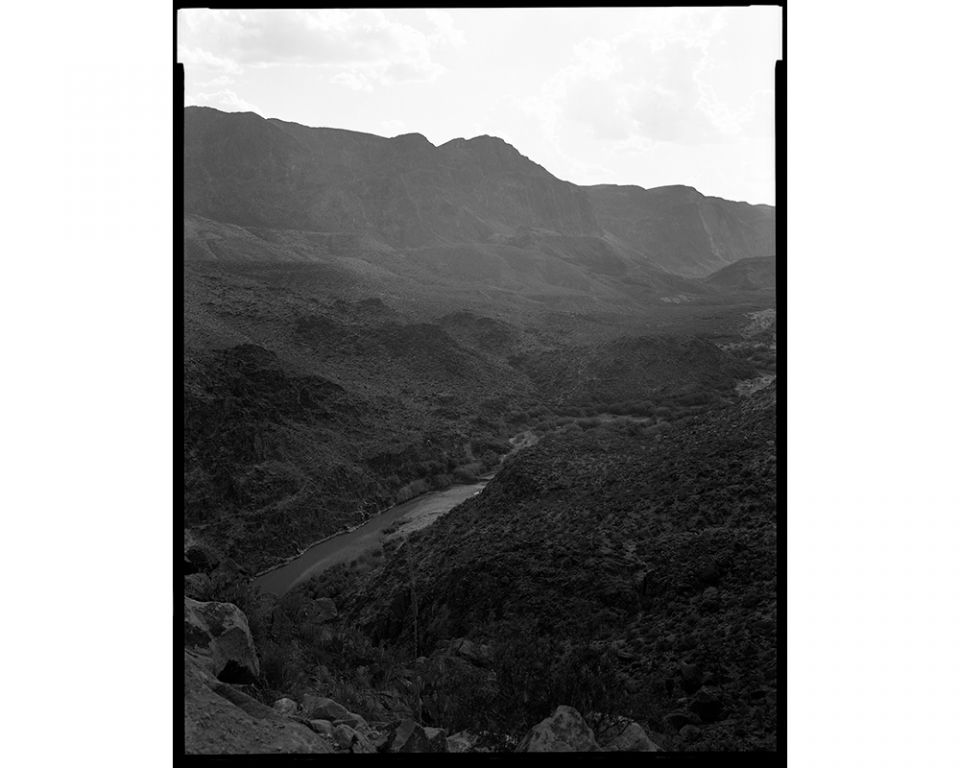 The Rio Grande between Lajitas and Presidio, Texas, looking at Mexico. "The beautiful landscape here is deceiving, and [there is] intensely rough terrain — desert heat, snakes, canyons, cliffs," Elmaleh says of this region with no wall. (© Lisa Elmaleh) 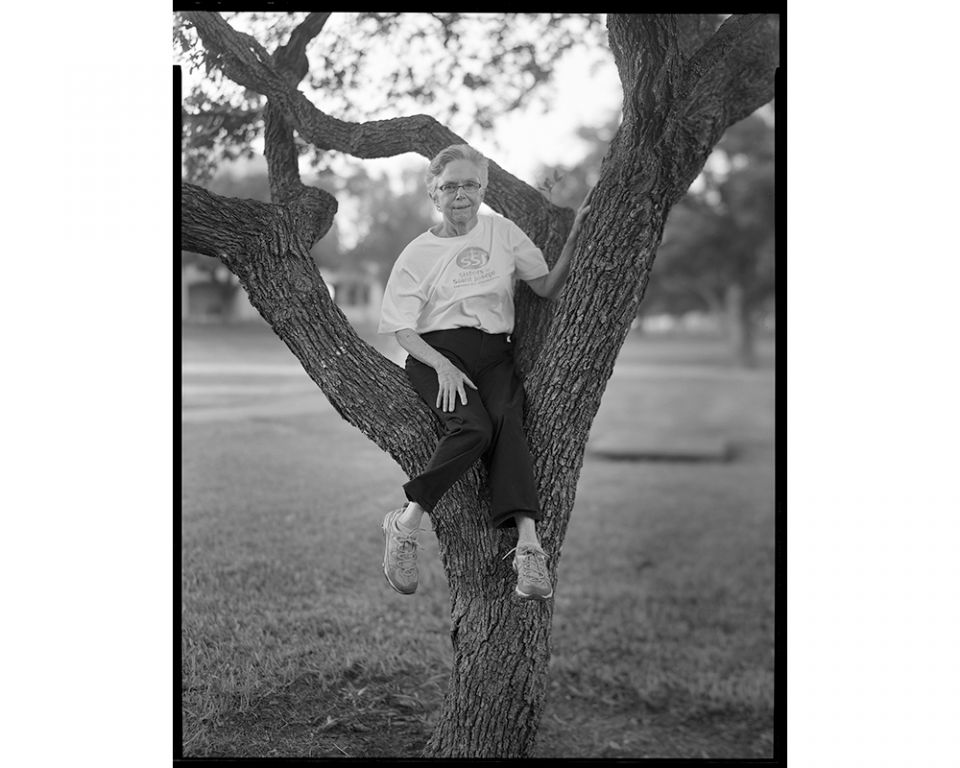 St. Joseph Sr. Rita Ann Teichman, who volunteered with Elmaleh at the Humanitarian Respite Center in McAllen, climbed a tree without prompt for a portrait. "All of the nuns are super youthful, but Rita Ann, she just jumped in that tree like it was nothing," Elmaleh says. (© Lisa Elmaleh) 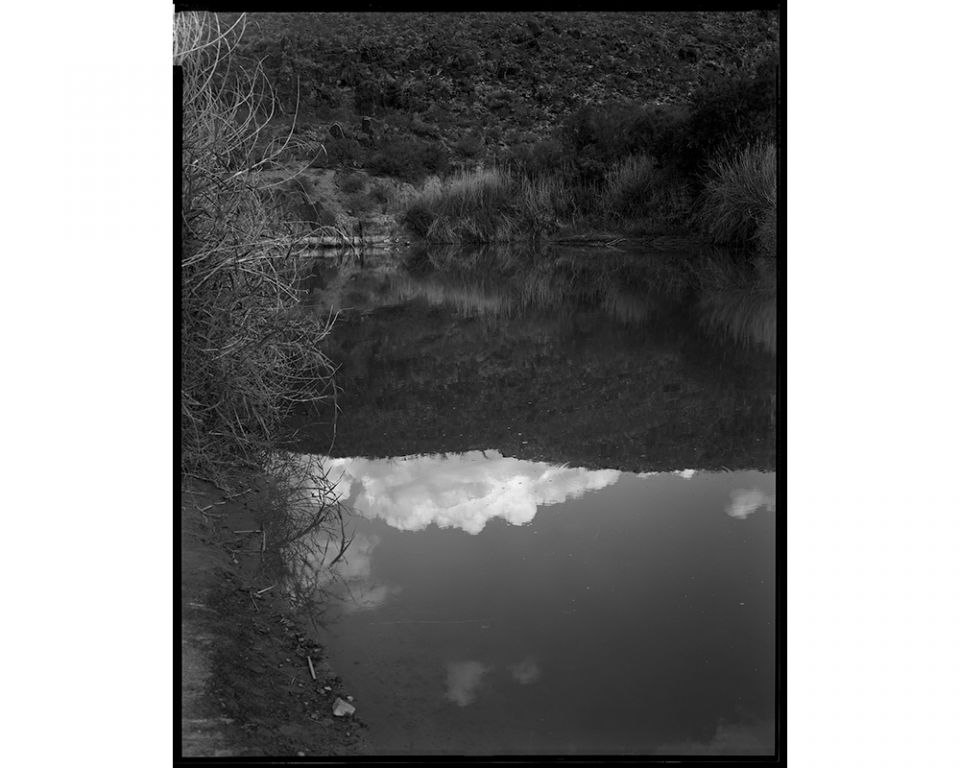 The Rio Grande in Big Bend Ranch State Park between Lajitas and Presidio, looking at Mexico. Elmaleh recalls the "oppressive heat" and how she was told by someone nearby that they had recently found a hiker dead, not uncommon for the area. "Puts into perspective others who are traveling on foot through the region," she says. (© Lisa Elmaleh) 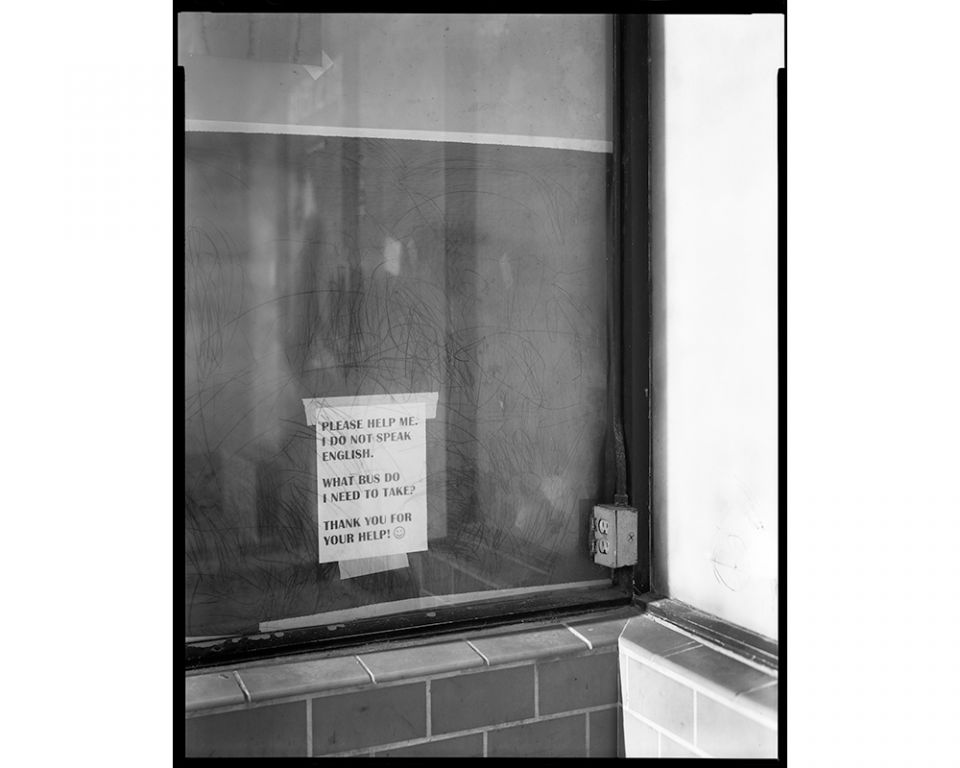 This sign, which is covering a hole in the frosting of a window at the Humanitarian Respite Center in McAllen, is what the center gives migrants as part of their folder of materials for their ongoing travels in the United States. "This was one of the first things I saw when I walked into the respite center" in May, Elmaleh says. (© Lisa Elmaleh) 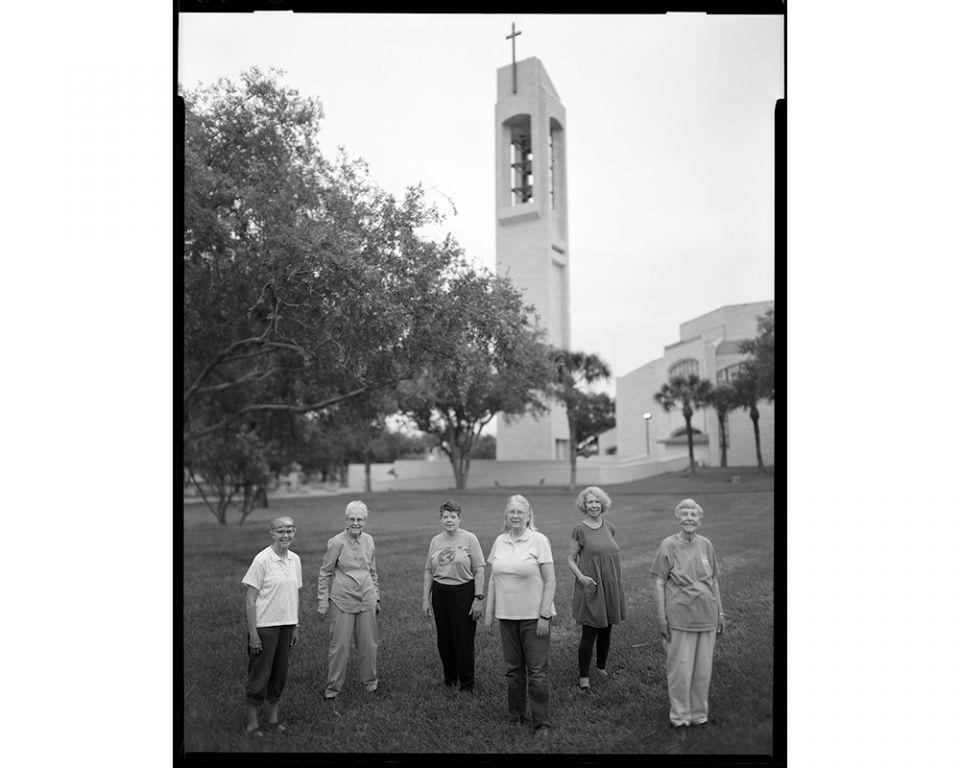 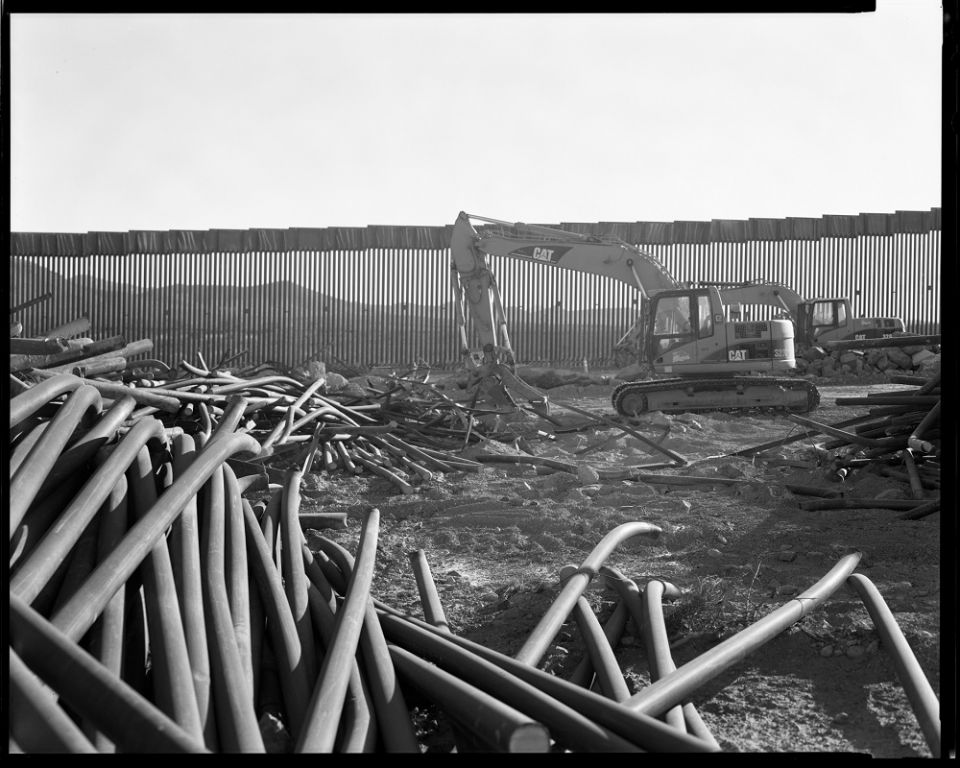 Outside Forrest, Arizona, in the last weeks of the Trump presidency, pieces of the old wall are thrown away as a new wall is built. (© Lisa Elmaleh) 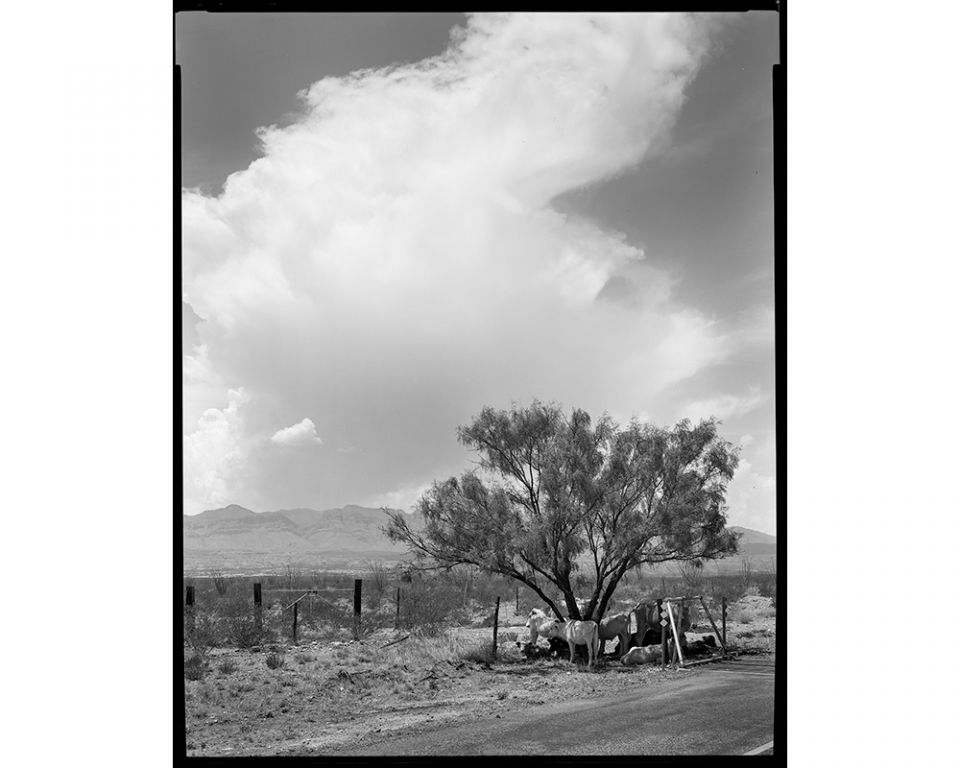 Cows crowd under the prime real estate of shade in a desert near Presidio on a 105-degree day in May. Shortly after taking this picture, "I ran into five men in the desert who had empty bottles and were flagging me down," Elmaleh says. "They asked me if I knew where San Antonio was" — about 460 miles away. "They were lost, so I gave them my water and was going to go to a store in town to bring them more water. But on my way, I saw Border Patrol driving toward them." (© Lisa Elmaleh) 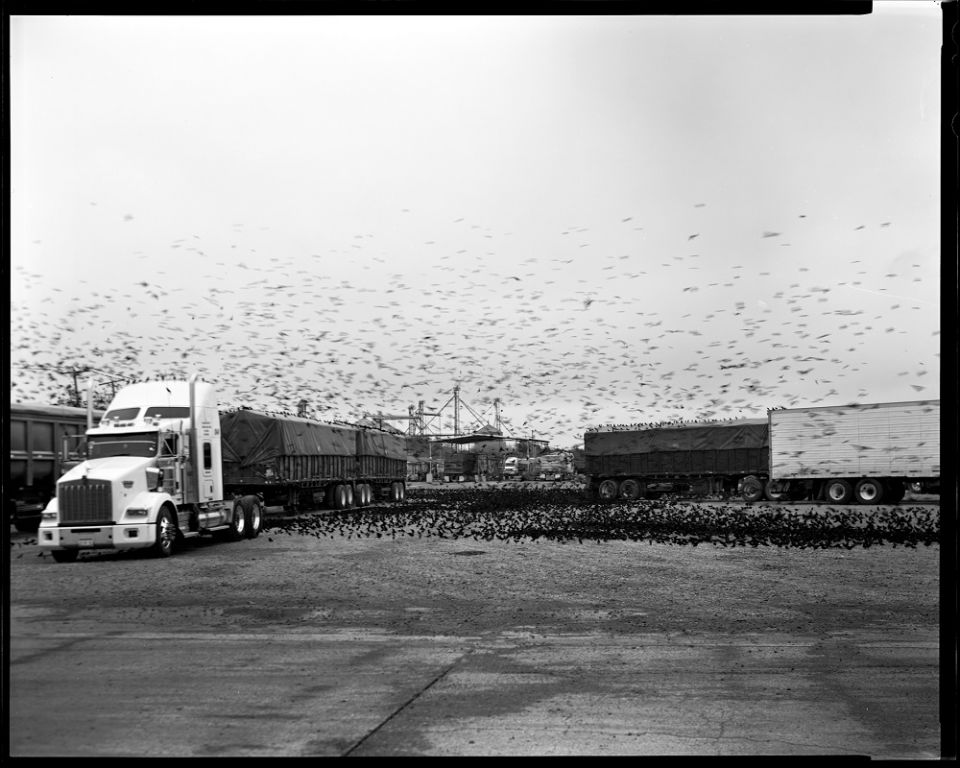 Red-winged blackbirds circle the spills of grain from a truck in Progreso Lakes, Texas. The scene, captured in January, was "Hitchcock-esque," Elmaleh says. (© Lisa Elmaleh) 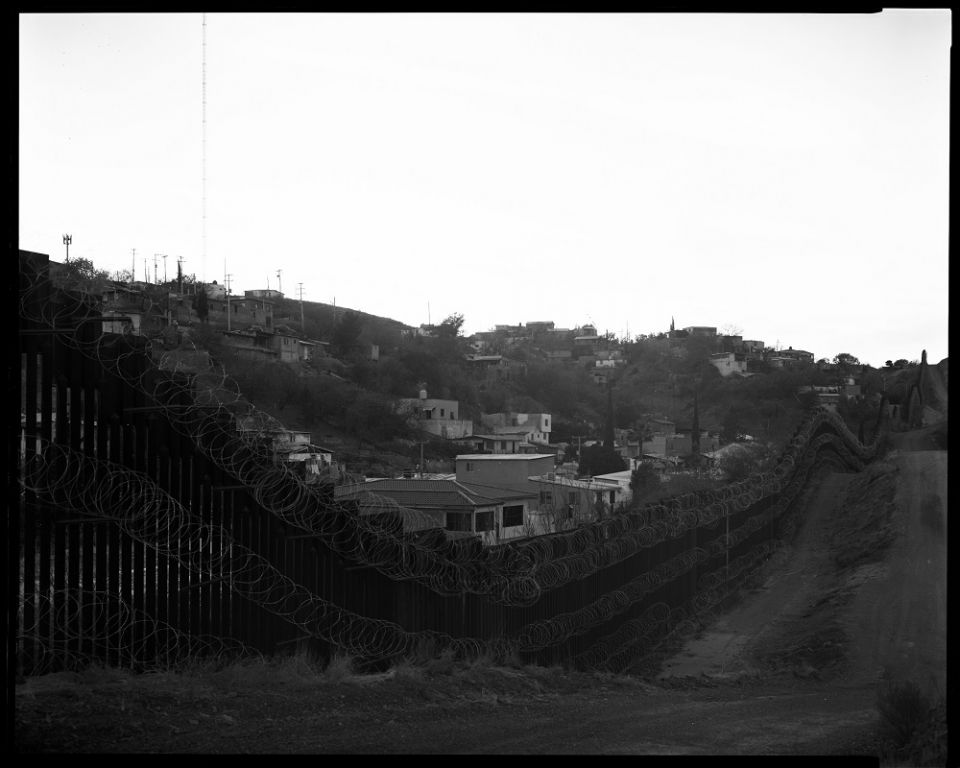 The community of Nogales, Mexico, as seen over the Arizona border fence in January. The city utilizes every inch of its side of the wall. (© Lisa Elmaleh) 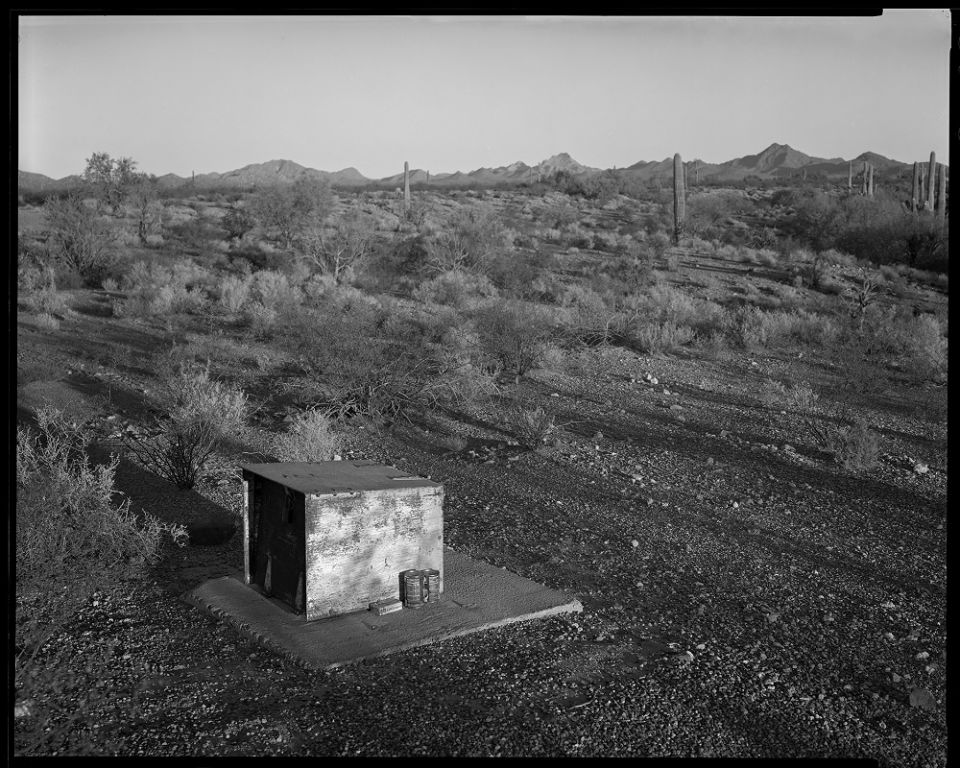 Donors leave cans of sardines, soup and beans outside this knee-high, locked box for hungry migrants traveling in the Organ Pipe Cactus National Monument. Few organizations leave food and water out for migrants traveling through the desert, and with extreme heat this summer expected to cause a spike in fatalities among migrants, organizations such as Border Angels and Tucson Samaritans are more critical than ever before. (© Lisa Elmaleh) 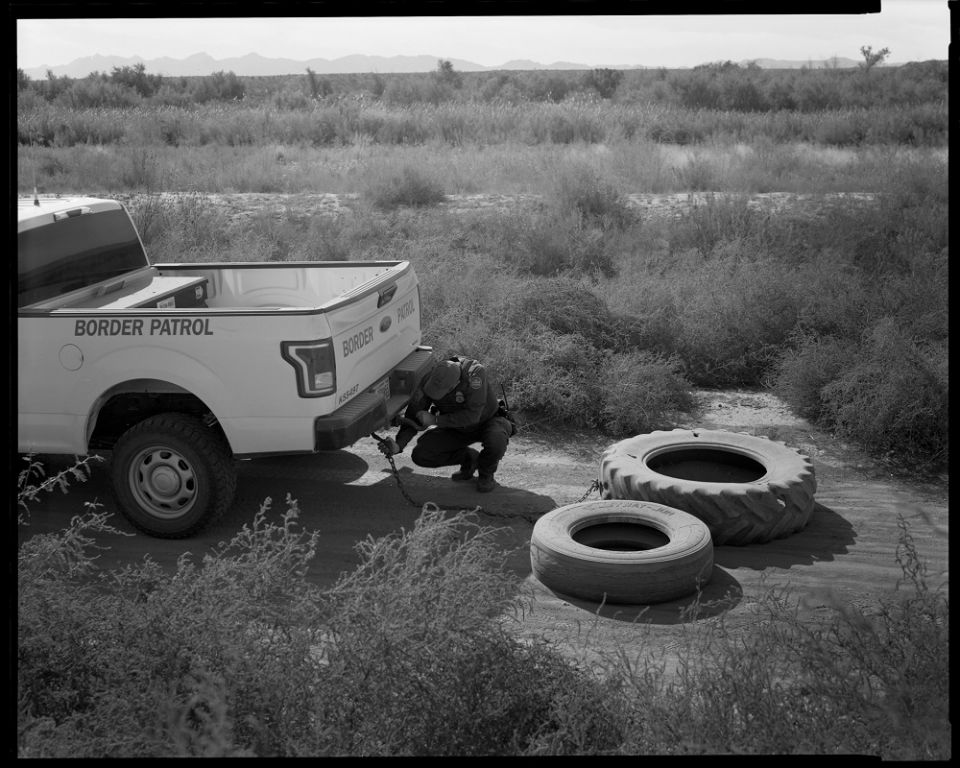 A Border Patrol agent in Texas drags tires behind his truck in June 2020 to smooth the dirt road in a stretch of land with no wall so footprints are more visible. Drug traffickers, which he says are common in that area because of a nearby interstate, were of particular interest to him. He did not mention migrants as part of his search. (© Lisa Elmaleh) 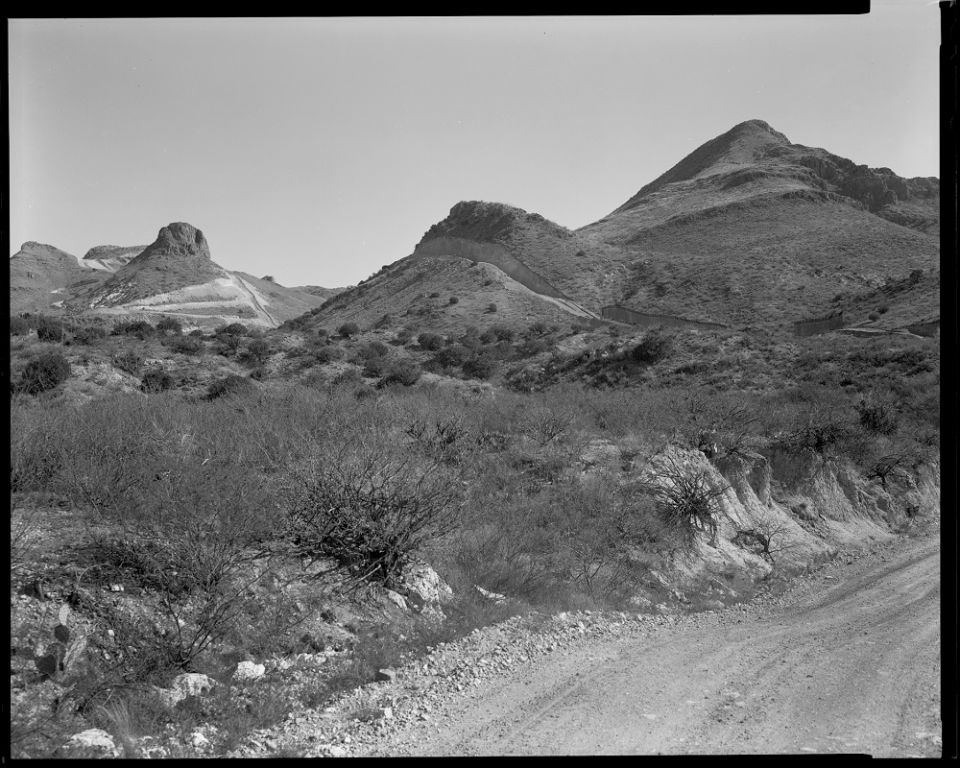 A portion of unfinished border wall is faintly visible at right against Guadalupe Canyon in Arizona, where a section of the landscape was intentionally cut down for wall construction. This photo was taken shortly before President Joe Biden's inauguration, when construction of the wall came to a halt. (© Lisa Elmaleh) 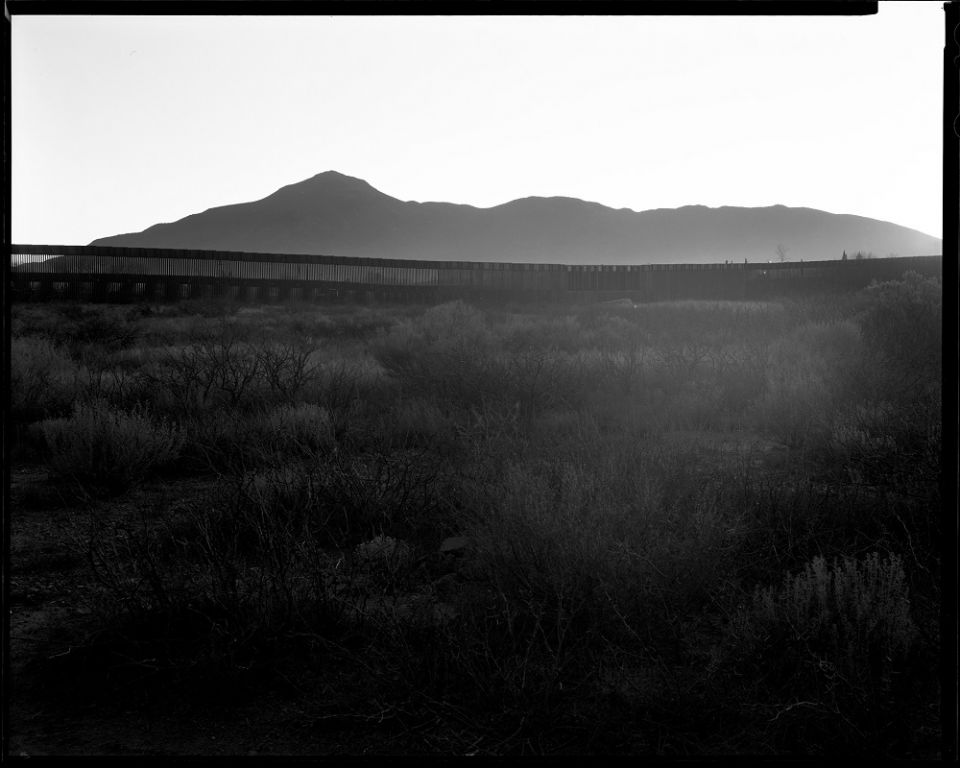 Twilight in Naco, Arizona, extends a haze against its border wall, a "scar on the landscape," as Elmaleh saw it: "Beautiful mountains, vast desert, difficult to cross, and then this massive 30-foot wall is part of the landscape." (© Lisa Elmaleh) 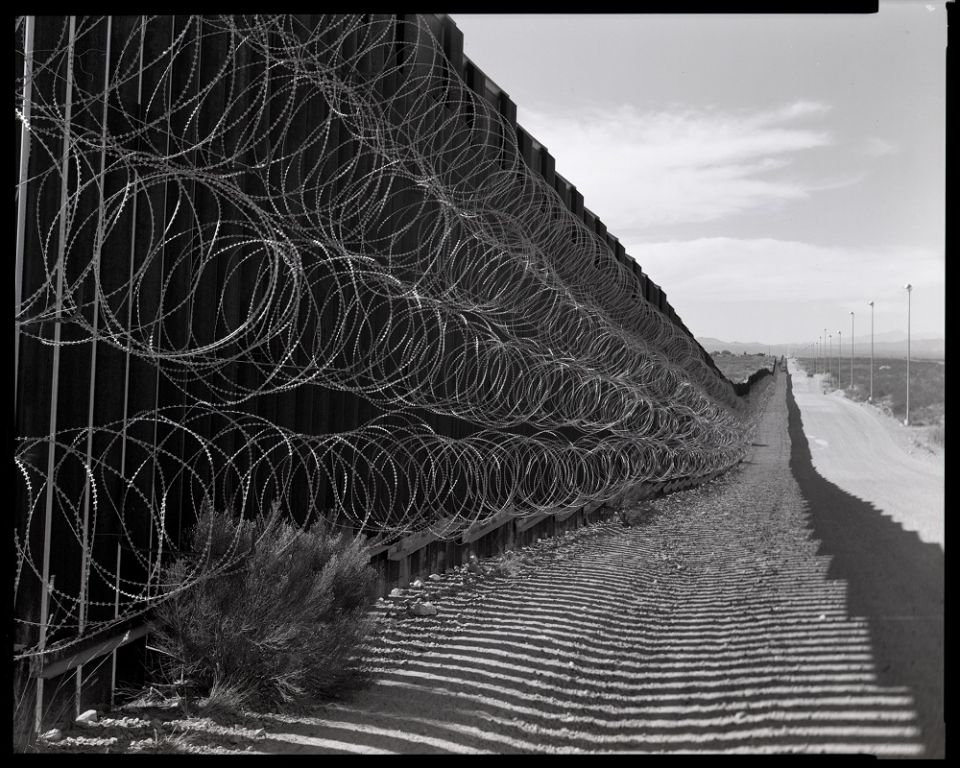 The border wall in Douglas, Arizona, in October 2020. The barbed wire is a typical feature on parts of the wall that border two cities, such as this one straddling Douglas and Agua Prieta, Mexico. (© Lisa Elmaleh) 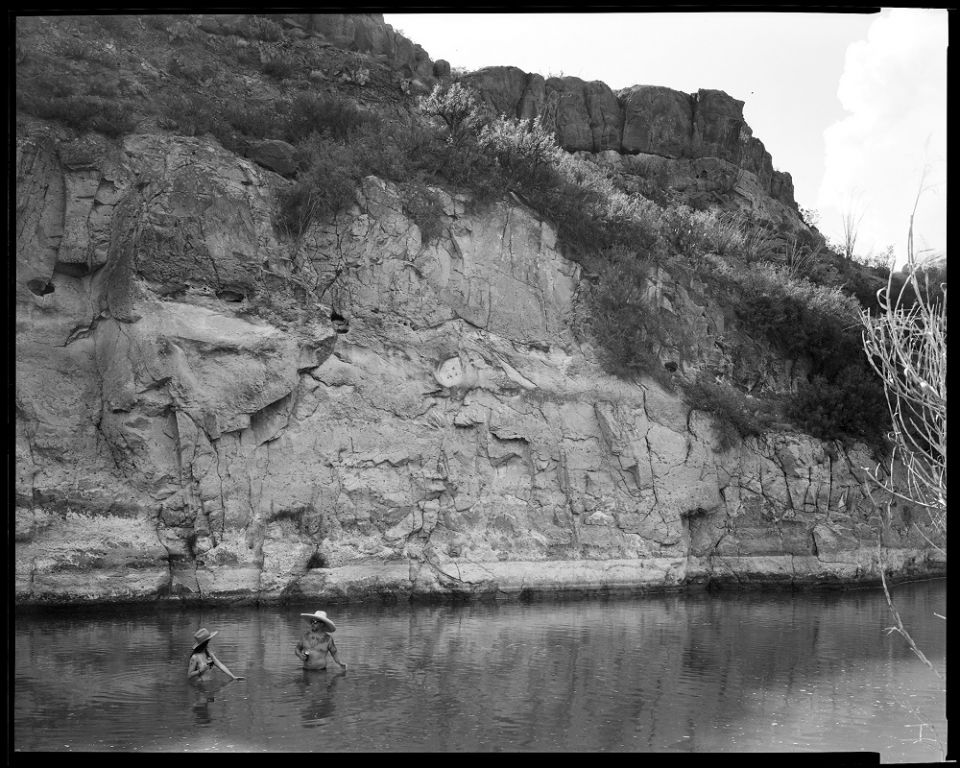 All along the Rio Grande, people enjoy the water and go for swims. Here are two individuals in Big Bend Ranch State Park; the cliff behind them is Mexico. (© Lisa Elmaleh) 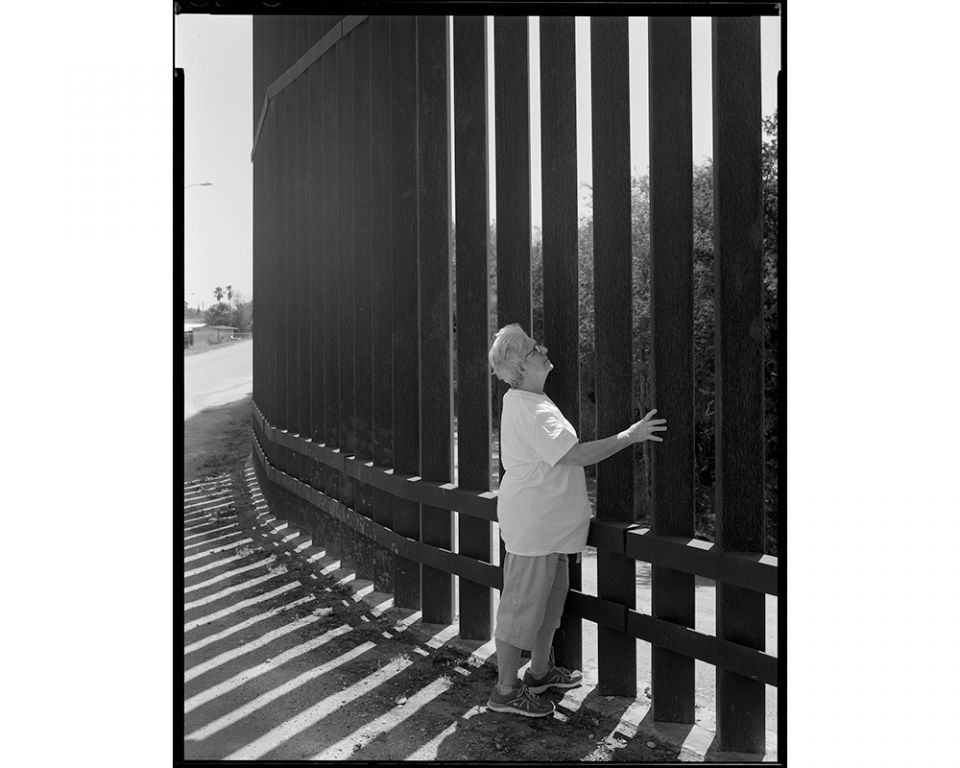 St. Joseph Sr. Sharon White at the border wall in Hidalgo. "She had more energy than I've ever seen in a person in my entire life," Elmaleh says of her fellow volunteer. "A radiant light." (© Lisa Elmaleh) 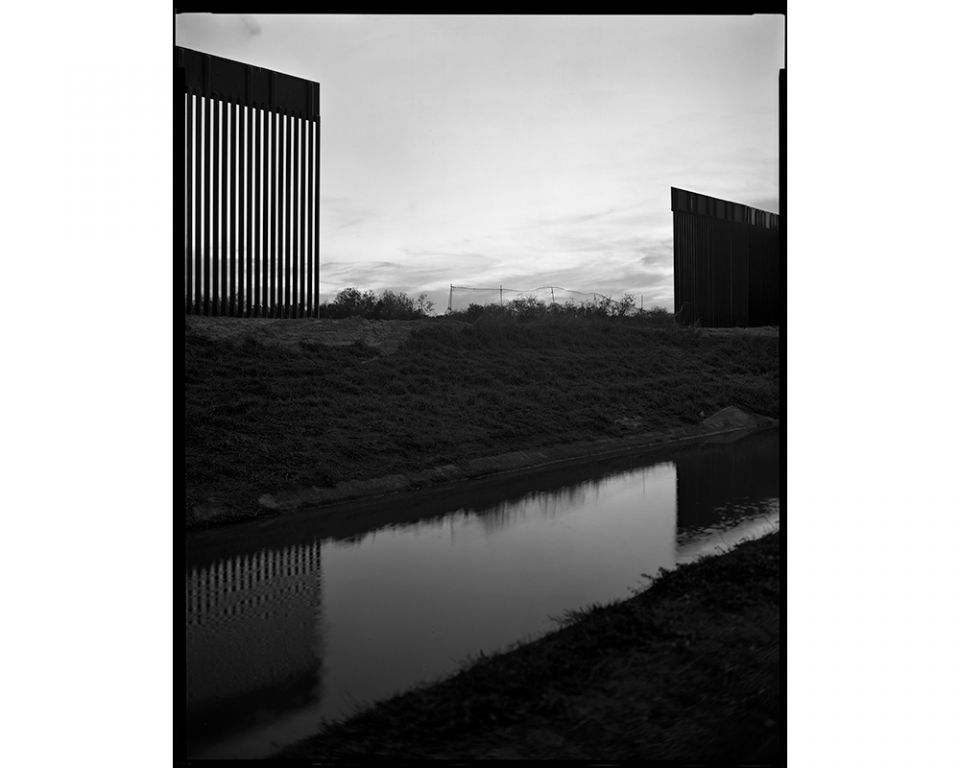 Large stretches of the wall remain unfinished and perforate the landscape in patches along the Rio Grande Valley. (© Lisa Elmaleh) 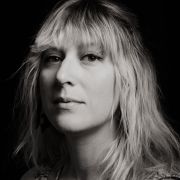 Lisa Elmaleh is a photographer whose work has appeared in The New York Times and Harper's Magazine. She plans to return to the border in the fall to photograph again.

Arts and Media | Frontera: Where the limits of a wall and the promise of the unknown intersect

'Too often we turn away': the faces of the global refugee crisis