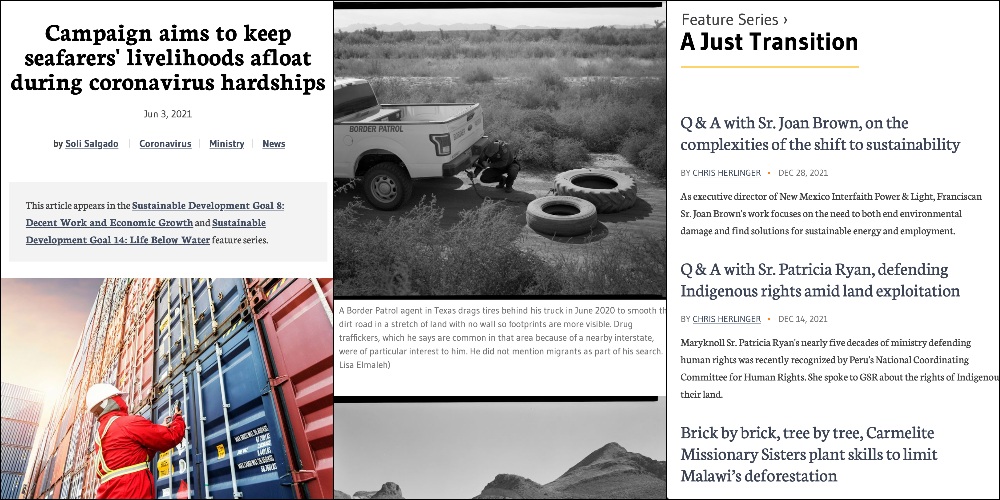 Global Sisters Report won nine awards from Catholic Media Association for stories published in 2021, with many of them related to ongoing coverage of the effects of the coronavirus pandemic. Notably, judges recognized GSR's signature series "A Just Transition."

The National Catholic Reporter and EarthBeat were recognized with 34 awards from the Catholic Media Association for coverage of politics, papal trips, the pandemic, immigration, the U.S. bishops and the environment, as well as for investigative reporting and in-depth news writing.

The Catholic Media Association announced the awards July 7 during its convention in Portland, Oregon.

GSR staff writer Soli Salgado won two second place awards. Her story "Campaign aims to keep seafarers' livelihoods afloat during coronavirus hardships" won second place in "Best In-Depth News/Special Reporting" for a non-weekly with six-plus full-time staff members. The judge's comments said: "This extensively reported story showed how seafarers — those responsible for delivering food, medicine and electronics around the world — were stranded on their ships because of COVID-19 restrictions. The piece gave striking examples of how seafarers are exploited and interviewed those involved in a campaign to raise awareness about their working conditions."

Salgado's story about how sisters are helping renters amid a housing crisis exacerbated by the economic backlash from the pandemic won second place in the "Best Online Content Not Published in Print — Feature" category. The judges noted, "Impactful communications product blends dramatic storytelling and visually-engaging media. Well done!"

GSR also won third place for "Best Coverage — Pandemic" with a broad sweep across the world about the ongoing impact of the coronavirus crisis involving staff writers and freelancers, including Africa regional correspondent Doreen Ajiambo, international correspondent Chris Herlinger, national correspondent Dan Stockman, and freelancers Charity Durano and Joachim Pham. "Vivid and detailed reporting on the widespread and worldwide issues caused by COVID-19 pandemic and what has been done to combat the problem, which transformed into a matter of survival."

Transitional. That's the word that ties these wonderfully researched and written stories focusing on transitioning out of fossil fuels and finding new jobs for those who depended on those environmentally unfriendly vocations. It's a worldwide issue so these stories take us to the Philippines, North Dakota, New Jersey and Malawi. It's not an easy transition as the overcrowded food pantries in North Dakota and the deeply imbedded poverty of Malawi proclaim. But transition is moving ahead. As one sister who helps tend an environmentally friendly farm put it: "It's a spiritual thing." And who can object when a spiritual thing can also fill stomachs and protect the environment.

An unusual approach to covering migration and U.S. border issues, "Frontera: Where the limits of a wall and the promise of the unknown intersect" by Salgado and photographer Lisa Elmaleh, who uses an 8x10 camera to capture compelling images, won second place in the "Best Story and Photo Package by Two Individuals or More." The judges noted the powerful combination: "In many ways, the photographs in this selection say so much more than the article and captions. The images are powerful and drive the storyline; however, the textual explanations bring greater understanding to the story being told. This compilation captures the tension of the border area and provides those who have never seen it with greater knowledge and awareness."

A joint project of Global Sisters Report and EarthBeat called "An estate plan for the Earth," received honorable mention as a multimedia feature package.